Camden Arts Centre turns 50 in 2015. But that’s not the only reason to crack open the bubbly. Director Jenni Lomax is celebrating 25 years at Camden this April, and it’s down to her indefatigable passion for the place that it’s risen from artist-run space to international big hitter. In 2009, she was awarded an OBE, but she’s far too bashful to brag. We caught up with her to talk about the past and future of this golden north London gallery.

Hi Jenni, happy birthday!
‘Thanks. It’s nice to be 50! Although I have to keep telling my staff I’ve not been here for 50 years…’

But you’re celebrating your own anniversary…
‘On April 1, I will have been here 25 years. Time has flown. But it’s been through quite a lot of phases in that 25 years. We had the building project ten years ago to make the place more suitable for the programme that we’d developed.’

Was the building in bad shape?
‘It was in a very bad way. When I arrived 25 years ago, we had DIY parties for pulling down old walls and painting everything white.’

I’ve seen photos of the bomb damage.
‘That definitely was before my time! The building, when it was a library, was actually bombed twice on separate occasions. Gallery one was part of a post-war build because the main library hall and what was the reference library were completely demolished.’

What was Camden Arts Centre like when you took over, what attracted you to it?
‘I was very aware of the space because when I first moved to London in the 1970s I lived in Swiss Cottage, so it was a place I came to and there were really interesting exhibitions: “The Mechanised Image” was one I remember coming to, and when I was a student I came to exhibitions of people like Stuart Brisley. It was very forward thinking and it showed a lot of what were then young British conceptualists.’

You were previously in charge of education at the Whitechapel?
‘It was the thing that really attracted me to it, actually. When I was at the Whitechapel, I wasn’t thinking: Oh god, I want to go and run a gallery. Education has always been my deep interest and I knew Camden as being a place where art was being made as well as shown. And also the exhibitions always seemed to have a connection to the processes of art – to textiles, print, installation, things that really made you think about how things were made rather than just showcasing names. It was really that potential that attracted me to it – the fact that there were the studio spaces and the possibility of bringing artists in to make work here and show it. I’ve really tried to keep that idea of making and the processes of artists as a kind of pulse of the place.’

Your artist residency programme has given an early break to artists like Simon Starling and Mike Nelson. That must be very gratifying?
‘Martin Creed was here in the very early days, and Simon Starling. For somebody like Mike Nelson, doing a studio residency was quite a challenge because he didn’t really have a studio practice at that time. More recently, Anne Hardy used the space to take her work in a new direction. It’s wonderful when you see an artist move on like that.’

The residencies are a great way for visitors to see art being made. Do the resident artists enjoy opening up for the public?
‘I think there are moments during a residency where artists can offer up things and talk to people about what they’re doing and I think that’s been very nice. I also think the fact that we have a ceramics studio here is amazing. As ceramics [courses and facilities] are being shut down around the country, we find a lot of our artists keep coming back to make stuff in the ceramics studio. It’s become this really important space.’

How do you keep so switched-on to new names and current trends?
‘I’ve been lucky. I’ve managed to keep a foot in the door of art schools as external assessor or visiting lecturer. I think it’s important to know what artists are doing on the ground. You can’t learn about art from art fairs, though they're fun. It’s also important to see what people do when they leave college, like Jesse Wine. Jesse was our ceramics fellow but I met him when he was a sculpture student.’

It must be difficult to balance that with what I imagine are endless committees and meetings?
‘Admin and, of course, fundraising is the big thing for all of us. For the last couple of years we haven’t been getting money from Camden Council, and then in real terms there are cuts from the Arts Council, which will only get worse. One of the things we really want to think about in this fiftieth year – because around this time a lot of organisations like Ikon and Modern Art Oxford are also celebrating milestones – is why in the mid-1960s people really celebrated art for the public, and publicly-funded art. It was about getting away from elitism and trying to make art more a part of people’s lives.'

Is a lack of public funding changing the sort of art that gets shown?
'We’re at a point where we’re in real danger of losing that balance of funding. Power is inevitably shifting and we’re getting to positions where the private sector is becoming more and more involved. I think we have to look at the value of public funding, which enables a certain kind of independence and nurturing of artists at a stage when people don’t quite know who they are, the Martin Creeds and Simon Starlings and Jesse Wines of the world when they aren’t showing in major commercial galleries.’

Do you think people get the wrong idea of the place because of the ‘Arts Centre’ tag?
‘We’ve agonised over our name because people think it’s a community arts centre. They don’t quite link it with major international exhibitions – it can really work against us. But, in fact, it’s quite nice being an arts centre because it means we’re more than a showcase, and more things can happen. It’s quite nice having that openness and it perhaps distinguishes us from other places. It’s our job to make sure people know that we’re the centre of something that’s international as well as local.’ 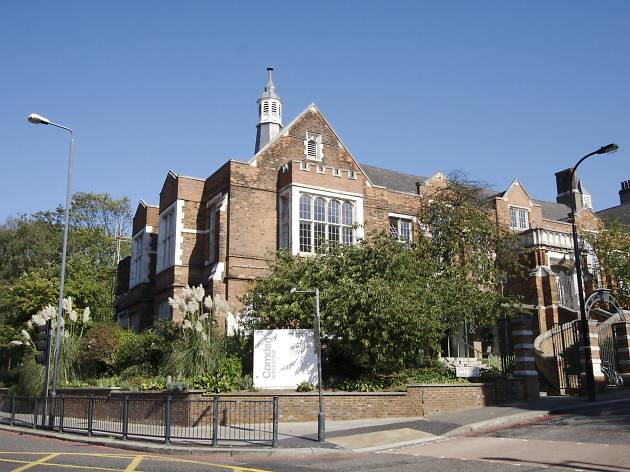 Constructed as the Hampstead Central Library, the Grade II listed building became the home of Camden Arts Centre in 1965. Initially it provided the local community with arts and crafts classes, but these days you're more likely to encounter a survey exhibition of an internationally renowned artist while still being able to appreciate emerging talent through Camden's residencies and artists' projects.