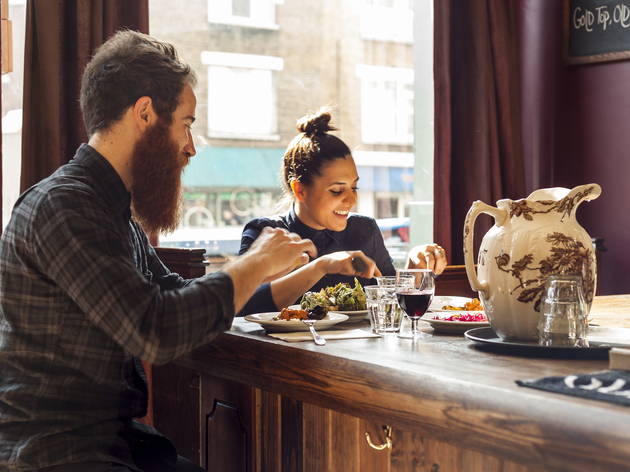 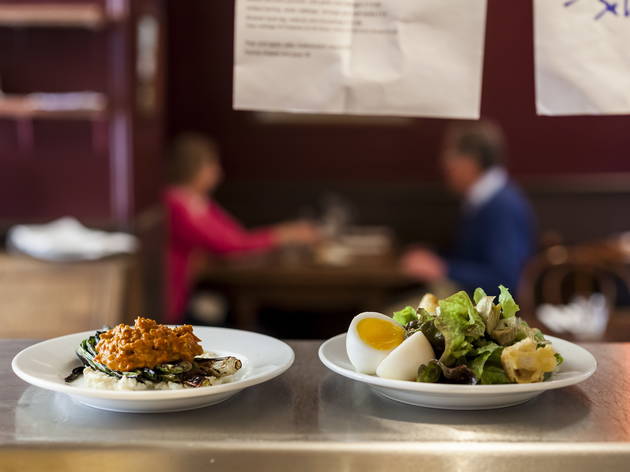 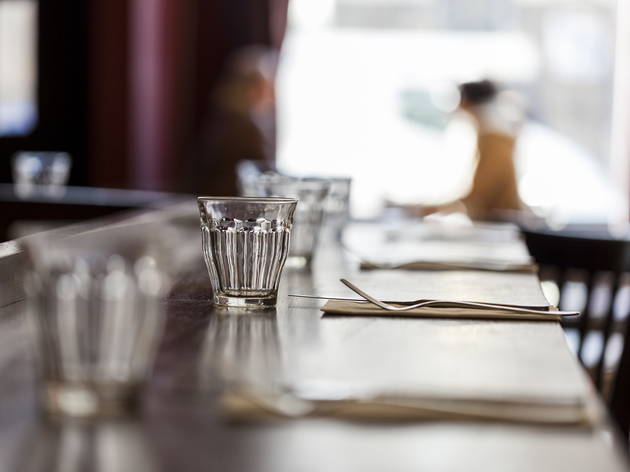 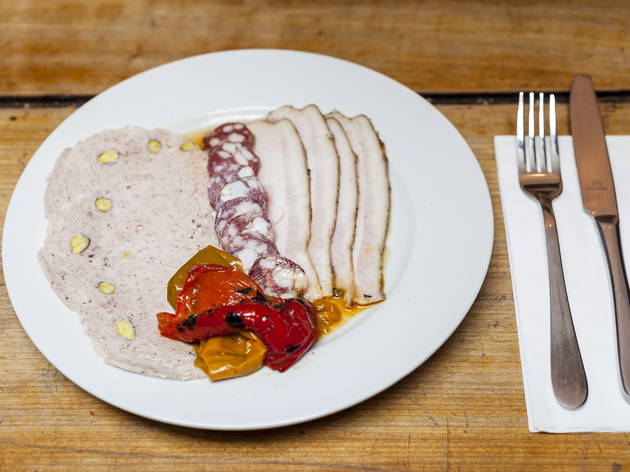 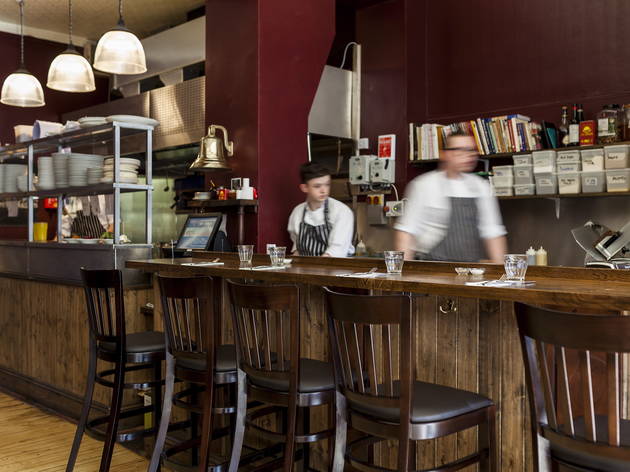 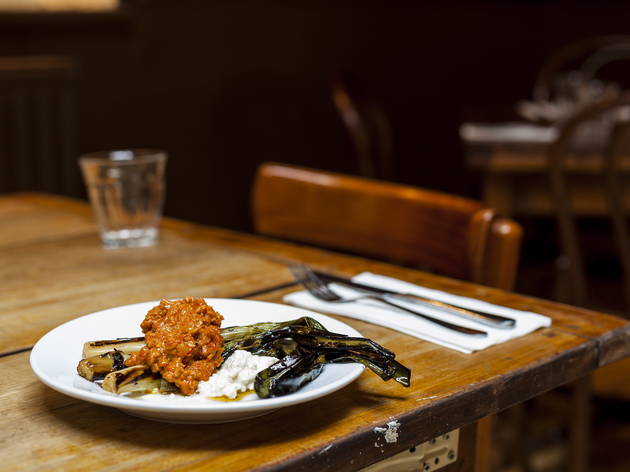 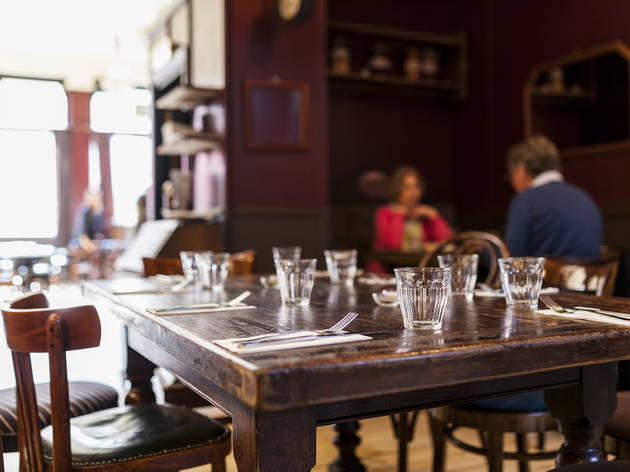 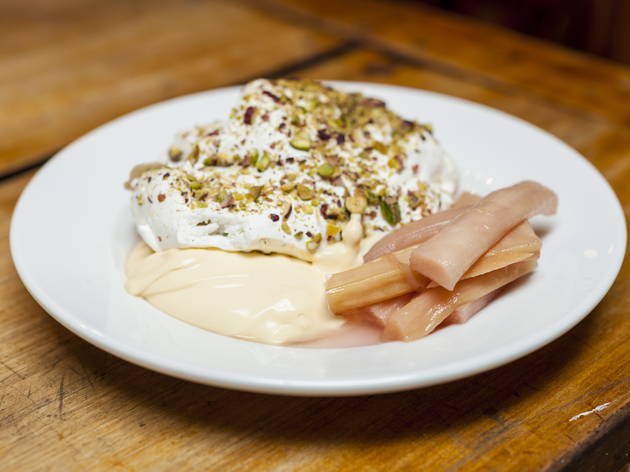 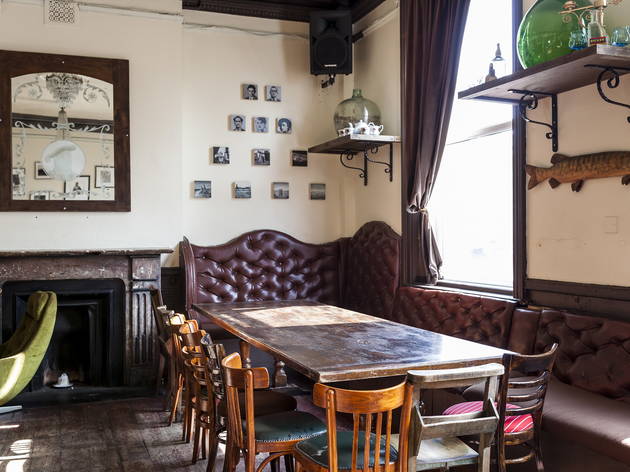 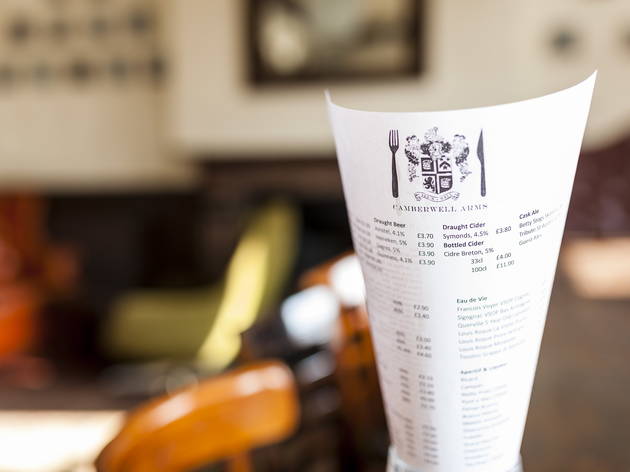 This well-proportioned Victorian boozer has been revamped by the team that produced Waterloo’s Anchor & Hope and Stockwell’s Canton Arms – both of them excellent gastropubs. The de rigueur open kitchen has arrived with huge charcoal grill, and there’s a dining area at the back of the ground floor. This was a quiet spot compared to the front bar, where lots of enthusiastic imbibing was helping fuel the noise levels.

The menu is in a similarly rustic and seasonal style to the Anchor and the Canton. A blackboard listed ‘half a chopped rabbit + chopped black cabbage for two £28’, while the printed menu included ‘pork fat and scotch bonnet on toast’, and ‘ox tongue, beetroot and horseradish’ – this is food for adventurous palates.

Kid had been slow-cooked until tender, and was served layered with (soggy) crispbread and a yogurt sauce tasting of mint and chilli. Despite all the searing and spit-roasting, the best dish was a simple leek and jerusalem artichoke gratin. The spiced rhubarb cake with crème fraîche was the happiest marriage, the sweet moments outweighing the sour.

Drinks include daily-changing guest ales – Skinners Betty Stogs and Sambrook’s Junction among them. There’s also a decent wine list and well-stocked shelves of spirits, though the rowdy mob in the bar appeared to be sticking to lager-lager-lager on our visit.

I'm a North London girl and I stand by my side of the river as having some of the best places to eat not only in the capital, but the country...but I'm also someone who's generally thinking about the next meal while she's eating the current one so finding anywhere new & delicious to eat is always going to make me very happy which is exactly what The Camberwell Arms did this week.

Step inside and it's a fairly standard looking bar; nice, not too big and with a fairly decent sized bar. Move towards the back though and you'll find yourself in a rather lovely little dining room complete with log fire & eternally flattering low lights, both of which are always going to be hugely appreciated on a Friday night at the end of a long work week in November.

This is a bold food menu tempered with safer options giving you the opportunity to explore and retreat with your plate as needed. Portions are generous and I'd recommend picking and sharing a few starters to get you going...after devouring the plate of A* focaccia that arrives shortly after you arrive. Flaked crab arrives atop a slender, crispy-edged crumpet, its sweetness beautifully fresh under a squeeze of lemon while plump burrata is nestled under piles of charred, soft radicchio and paired gorgeously with fruity balsamic, currants & pine nuts. Leave without ordering the focaccia and red beer onions though and consider yourself one of life's true losers. This ultra-simple dish is one of the best things I've eaten all year, the onion incredibly soft, fragrant & flavourful. Y'know that person who asks if they can finish something off while doing just that? Oh hey yeah, that was me here and I don't even care, they're that delicious.

There are some nice sharing options available - the lamb for two was resplendent in its serving dish and fell off the bone with the gentlest of pokes - as well as some seasonally creative options that you can greedily covet and eat solo. Gnocchi alla Romana doesn't make it onto many menus so when I see it, I order it. One giant, crispy, melty dumpling was perfectly caramelised up top and indulgently oozy below, some tart greens & burst tomatoes delivering a sharpness that cut through the richness of the star player.

There's a great choice of dangerously drinkable wines available with price points that are both sympathetic and aspirational and service was unobtrusive but excellent; as a table catching up with each other, we were never rushed along and the evening floated by in a warmly fuzzy haze of crackling-log-lit glasses of syrah.

Whether you're lucky enough to have this place as your local or you live at the other end of the nearby Northern line, I'm happy to admit that it's a South London delight worth heading to; if it's an end-of-the-week toast you're after, this is a spot where you can do it with no small amount of class and charm.

The feel of an old boozer in the bar with high end food being served out the back. If you’re just visiting for a drink, grab a stool in the window to people watch along Church St. The food caters to sharing so good to go with a group. There’s also a function room upstairs.

Amazing food. Amazing wine and the staff are all super lovely and knowledgeable about all the offerings. My favourite restaurant in London. Easily.

up there with St Johns, their seafood dishes - octopus, squid, or cuttlefish - are the best of their type i have ever had...and the fried potatoes will bring a greedy tear to your eye

You can't physically leave this place without rounding things up with their sticky toffee pudding!

The highest quality food in any of the pubs in Camberwell, almost a restaurant over a pub, but the "pub" area is still great.

It's a nice little boozer. Food wise, I've only ever gone there for dessert before. The Silk Road's only a few doors away (and difficult to walk past if you're hungry and can get a table) but this is a good stop for pud.

So apparently this pub recently won an observer food monthly award. I went along with some friends for Sunday lunch and as expected, it was extremely busy. Most of us opted for the spitroast chicken to share and although it was nice, it was a little dry, there wasn’t much sauce and there was minimal salad and the roast potatoes were seriously lacking. Such a shame as was expecting much more from this well known pub. Looking around at what the other diners had though their dishes looked much more tempting, so perhaps it was a case of ordering the wrong thing on the day. The desserts were great and the sticky toffee pudding was moist and melt in your mouth goodness. The staff although friendly, seemed to be a bit overwhelmed by everything so the service wasn’t great when we visited. The open air kitchen downstairs I wasn’t sure about, as it made the pub really smoky and we all stunk of food after we had left. Maybe visiting again during less busier times might be wise next time.

What used to be a rather tired looking pub on Camberwell Church Street has been taken over by the same people who run the revered Anchor and Hope in Waterloo. I've never been a fan of the Anchor and Hope due to the near impossibility of being able to get a table there and a poor experience with the bar staff there. The Anchor and Hope's sister restaurant, The Magdalen Arms in Oxford, restored my good faith with the winning combination of amazing roasts, pies and cocktails. Happily I can report that the Camberwell Arms is much more along the lines of the Magdalen Arms - it's a much more relaxed affair than the Anchor and Hope. Expect the same stellar cooking (think the platonic ideal of a Sunday roast). Pies with crusts so golden and crisp that you'd be unashamed to pick off the bits welded to the pie dish. The bar snacks are also worth a peek too - when I went for Sunday lunch a few weeks ago, it was a sublimely fiery dish of smokey, chargrilled sourdough topped with unctuous and salty pig fat spiked with scotch bonnets and set off with a sweet and mellow roasted bell pepper.

All good then, and what's more the clientele who I loath at the Anchor and Hope are nowhere to be seen phew! (How long will that last?)

What a pleasure to have one of the best places in London for a roast right on my doorstep! Not to mention the drink and the rather dishy staff too!

OUtstanding, sentational food. Mike is a genius chef .  Simple fresh ingredients perfectly cooked, what more can you ask for. A full page positive from Fay Maschler too!!

"But don’t hold your breath expecting a Foxtons next door". Seriously, don't. And be thankful. While we in Camberwell have done well to hide Camberwell's hidden gems from Foxtons and their ilk, alas we haven't down so well avoiding the critical scrutiny of reviewers like the one above. This sniffy review, and its knowing thinly-velied snobbery, is appalling and deserves no place in the otherwise excellent Time Out.

The quite costly overhaul of the old pub has delivered a good dining venue very much in the style of the Canton and the Anchor & Hope, but with a partially open kitchen. We had the spit-roasted chicken, with potatoes, watercress (not soggy) and wholegrain mustard last night, and it was great and reasonable value for 2 at £27. The lager-lager-lager crowd weren't apparent . Despite the bar serving a fairly mediocre selection of lagers on tap, the only thing ending up well "battered" was me after a few bottles of their very good Lake District ales.

There was a fairly constant stream of police vehicles outside; the local bobbies are very fond of the excellent F.M. Mangal across the road. That might not be apparent to you if you keep your head down and hurry fearfully back to your more salubrious neighbourhood. But don't do that, it would be a terrible shame.

UPDATE: Since writing this review, the original TO review above by Guy Dimond, has been edited to remove the less-than-helpful remarks I referred to. I applaud TO for that, and hope you get a chance to visit the Camberwell Arms.