Night Thing presents Auntie Flo and Andrew Ashong
Jazz Cafe’s eclectic Friday club night is getting the bank holiday weekend off to a top-notch start. Get stuck in for London maestro Andrew Ashong’s soulful take on house and the diasporic sounds of Afrohouse innovator Auntie Flo. All for a fiver!
Jazz Cafe. Fri Aug 25.

Push the Button: Spice Up Yer Life 2017
Add a little spice to your bank holiday – not to mention a pinch of Baby, Posh, Sporty, Scary and Ginger. To celebrate 20 years since ‘Spice World – The Movie’, you can hop aboard a double-decker and enjoy a Spice singalong, with drag queens and driver ‘Meatloaf’ at the helm. Whip past the Royal Albert Hall, London Bridge and finish up at the Royal Vauxhall Tavern, where pop-gasmic club night Push the Button will be putting on a spicy knees-up. Register at Retro bar between 7pm and 8pm; the bus ride starts at 8.50pm. And if you don’t get tix, RVT’s regular action kicks off at 9pm. NB: this is not the original bus featured in the film – which hasn’t been seen since its iconic Tower Bridge jump.
Various locations. Fri Aug 25. 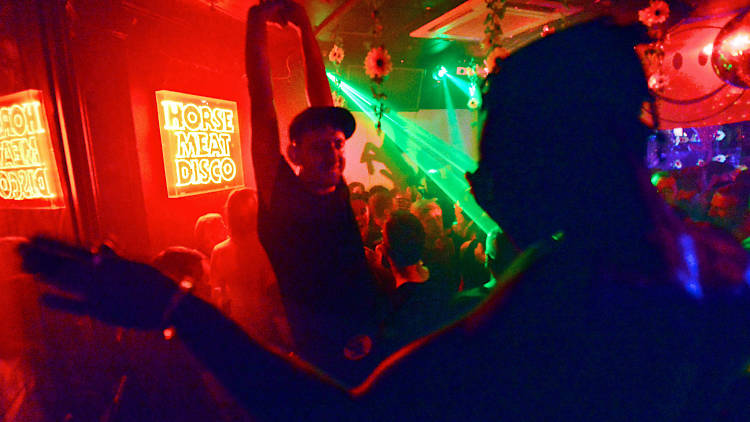 Little Gay Brother
Secret Garden Party may be over, but the folks behind the fest’s biggest and gayest party are bringing the fun to London. LGB’s parties are always the bomb. While the DJs are always shit hot – this one features house aces The Menendez Brothers – the focus is way more on the party’s dancers, who come wearing the fiercest lewks imaginable – such as the cheeky Ikea numbers at the top of the page. It’s also the only party where treadmills flank the DJ booth. Win.
Omeara. Sun Aug 27.

R&She
Prepare to get ur freak on because the queens of hip hop and R&B are launching another of their ace takeovers at queer subterranean playpen Heaven, this weekend. DJs Neil Prince, QBoy and David Oh will keep you moving until the early hours to a stellar soundtrack of female-fronted R&B and hip hop hits. What’s more, all the boss lady magic is just £5 with a flyer.
Heaven. Sun Aug 27.