We went behind the scenes at Kiln, the Soho eatery that scooped the top spot on our 100 best restaurants list this year

I expected it to be hot behind the service counter at Kiln, of course I did. The restaurant is literally named after a furnace, after all. But I didn’t expect it to be quite so hot. Enormous buckets of charcoal merrily crackle not 30 centimetres from where Kiln’s fashionable young staff prepare the restaurant’s northern Thai cuisine. Chefs, dressed all in black, weave expertly along the galley-like, open kitchen, seemingly impervious to the threat of third-degree burns should they misstep and knock into one of the charcoal-filled taos [clay burners, imported from Thailand] sizzling in front of them. Facing them, at a long, steel-topped bar, sit the patrons, lined up on leather stools.

I’ve gone behind the scenes at the Soho restaurant, which has just been announced as Time Out’s Number One in London, to see what makes it so special. And it’s proving more hands-on than I was expecting. In the kitchen, head chef Meedu Saad shows me how to prepare Kiln’s signature dish of clay pot-baked glass noodles with Tamworth pork belly and brown crab meat. I place the pork belly slices in the base of the clay pot, before spooning crab meat over – don’t pack it in too tightly, or it forms a seal and prevents the delicious pig fat from rendering through the dish – and then pat a generous handful of noodles into the bowl, like I’m putting a child to bed. I finish it off with a garlic chive garnish, a ladleful of soy-basedsauce and another ladle of chicken stock, and it’s ready for the charcoal grill. Depositing the clay pot on the glowing coals, I feel like I’m taking the Central line on the hottest day of the year. Wearing a puffer jacket. It’s baking back here.

But Kiln’s staff don’t seem to mind. Or if they do, they’re not letting on. They’re a merry bunch, snacking on gingerbread men provided by a local coffee shop as they prepare for another busy evening’s service. Outside, the weather is foul. I sit down with Saad over a steaming bowl of Kiln’s bestseller. ‘We sell more clay pot noodles than anything else,’ he tells me. It’s easy to see why. With them priced at just £6.75, you’d be hard-pushed to find a better plate of food for less than a tenner anywhere in the capital.

Saad, 33, took over as head chef earlier this year, after a spell working at Shoreditch’s Smoking Goat. (Kiln, Smoking Goat and east London’s Brat are all owned by superstar restaurateur Ben Chapman and his business partner Brian Hannon.) He talks me through Kiln’s cuisine, which is influenced by the food of northern Thailand, Burma and Laos. ‘The flavour profile is more bitter and astringent,’ he says. ‘It’s more medicinal in its flavouring. It focuses on freshness.’

We’re miles away from the rote pad thai of a thousand suburban Thai restaurants. Kiln’s dishes feature unfamiliar ingredients like krachi (wild ginger root), betel andmango leaves. Saad tells me about a dry jungle curry with wood pigeon he developed with Thai food master Hanuman Aspler in Doi Saket, near Chiang Mai. ‘We foraged all this stuff from his incredible garden, and created this jungle curry paste which uses the offal from the pigeon.’ To keep Kiln’s carbon footprint low, similar Thai herbs are grown for the restaurant on a farm in Dorset. The meat is also sourced from organic UK farms.

Chicken is cooked for 45 minutes on a grill above a charcoal pit until soft and gelatinous. Plump Tamworth sausages are garnished with fruity Laos chillies to cut through the richness of the meat. It’s unusual, imaginative cooking. As we chat, Saad’s team are preparing for service. In front of us, senior chef de partie Toshi Akama is tending to the glowing charcoal briquettes, repositioning them so they’ll be ready when needed. Akama is Kiln’s literal firestarter, and you can tell: his arms are covered in painful looking burns. (He catches me looking and hurriedly tells me that he doesn’t mind. ‘It’s part of the job!’ he says with a smile.)

The atmosphere is serene – ‘Ramsay’s Kitchen Nightmares’ this is not. ‘I hire adults,’ says Saad of his management style. ‘I don’t need to shout at them.’ Kiln treats fire with a kind of reverence. ‘I think this is the way I like to work,’ says Saad. ‘It takes a lot more skill to work on an open flame because it’s not just concentrated heat, like on a hob. I don’t think I could go back now. You have to be tentative and move it around and feed it. It’s almost like an ingredient, just as much as the things that are going into the wok.’ Akama picks up a 700 gram, 40-day aged beef wing rib from Cornwall butcher Philip Warren, and places it on the grill. I stare transfixed at this hulking hunk of meat as it slowly renders over the glowing charcoal while commis chef Ben McGuire strips mint for salad, deftly flicking the stalks in the bin.

We gather for the 4.30pm staff briefing, ahead of this evening’s service. ‘It’s rainy tonight,’ says assistant general manager Owen Davies, ‘so let’s have some space for umbrellas.’ Akama brings over the beef wing rib, finely sliced, the inner meat perfectly pink. Saad explains that there will be four wing ribs on the menu, each suitable for a party of four to share (or two people, if they’re really hungry). ‘Let’s taste some beef,’ he says. We pile in. Davies talks us through the wine pairings. ‘This is a trebbiano from Tuscany,’ he explains. ‘It’s a very high contact wine. It’s had three months’ skin contact.’ It’s deliciously crisp and dry. I could drink an entire bottle.

I catch up with Davies as patrons start to trickle in. He’s front of house, meaning that he’s manages Kiln’s queue (you can make reservations for parties of four, but everyone else has to wait their turn). As the restaurant’s so popular, this can take a while. ‘People do come back well oiled sometimes,’ Davies laughs. ‘I don’t mind, as long as they’re well behaved. When you have a two-and-a-half-hour queue, you can slip a fair few drinks into that time.’ The worst part of Davies’s job? Looking after Kiln’s toilets, which are prone to the odd blockage. ‘We’ve got a really huge plunger downstairs,’ Davies says. ‘Sometimes you just need a big weapon to do a big job.’ People are streaming into Kiln now, damp from the rain, tired from the week’s work. The music picks up. McGuire dons a red bandana.
He’s ready for business. Around us, people order lamb skewers and scan the wine list. I’m served a dish of turmeric cod curry at the bar. It is nothing like the fish curries I’m used to: cloyingly dense with coconut cream. It’s light and has a sour tang. I inhale it. To my right, McGuire is trying to persuade a patron not to eat a whole scotch bonnet chilli before their meal. ‘I’d recommend eating the food first,’ he advises, tactfully.

Feeding people well, making them feel at home. It sounds simple, but so many restaurants get it wrong. Kiln makes it look effortless.

As I’m leaving, a mother and daughter are arriving, shaking out their umbrellas. They look at the bar, quizzically. Is this it? Relax, I want to say. You’re in very good hands.

The 100 best restaurants in London 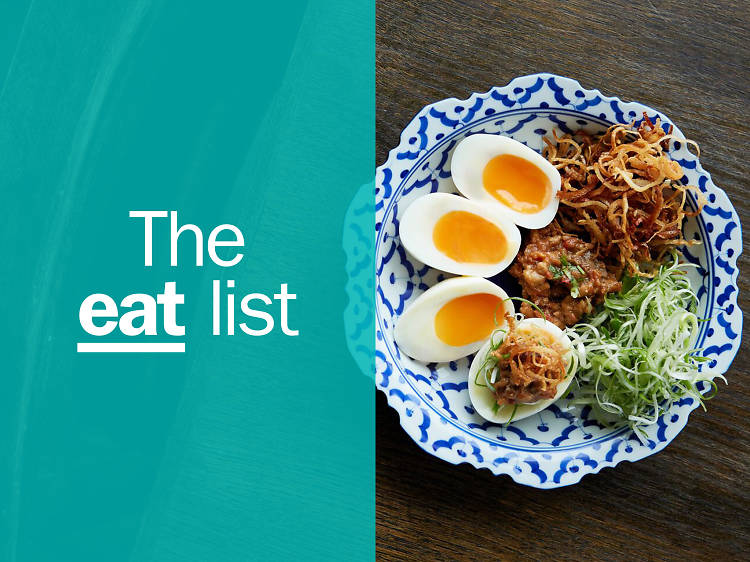 The 100 best restaurants in London you have to try