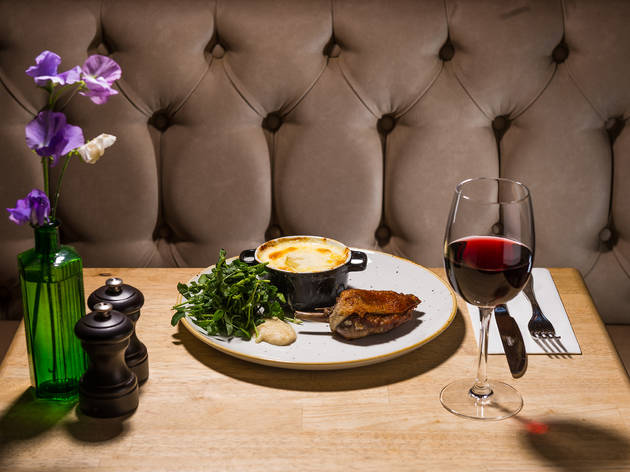 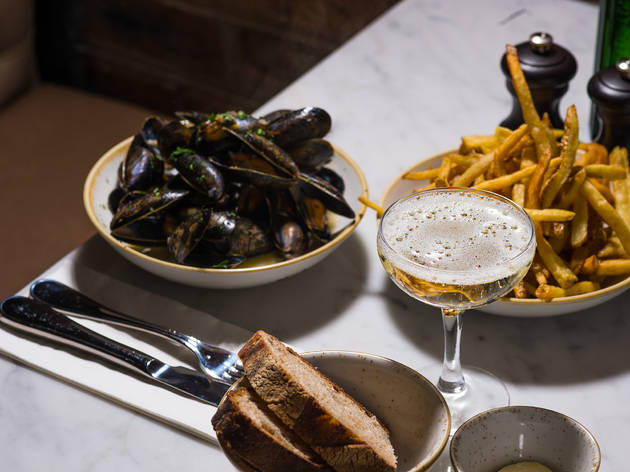 Please note, Petit Pois Bistro has temporarily closed for refurbishment. It is expected to re-open in February 2020. Time Out Food editors, JANUARY 2020.

You could easily miss this tiny French bistro, sandwiched among the loud, look-at-me drinking and eating joints of Hoxton Square. But step through the door and Petit Pois’s character becomes clear. With its handful of tables, leather banquettes and small kitchen visible at the back, it has a friendly neighbourhood vibe that’s pleasingly off-kilter for the area. When I arrived, the manager was running around clutching a mixing bowl full of chocolate mousse, dolloping it on people’s plates. In my head, I’d already ordered it. An hour later, I was glad I had.

This is one of those places where the restaurant meets diners halfway. Staff are fun and helpful but not fawning, and the menu is limited while being confident and familiar. It’s not about fancy cooking or fussy sauces – it’s about a small selection of classic dishes done very well, at prices that aren’t exorbitant but honour the obvious care taken over standards like moules frites and potato dauphinoise. They offer four starters, four mains and two desserts. That’s it.

I tried the steak frites with béarnaise – good meat and better sauce, although the chef’s definition of ‘rare’ was more English than French (the latter being bloody, but tastefully so). Two other things about the menu weren’t very continental, this time in a good way. First, there’s a non-token veggie option – a rich dish of fennel, haricot beans, confit garlic and red cabbage. Second, that veggie option is very good.

London now has so many Gallic ex-pats it’s been called France’s sixth biggest city, and there’s certainly nothing foreign or exotic about French cooking anymore. Petit Pois runs with that reality, offering familiar food, simply but very well done. It gets my vote. Give peas a chance.