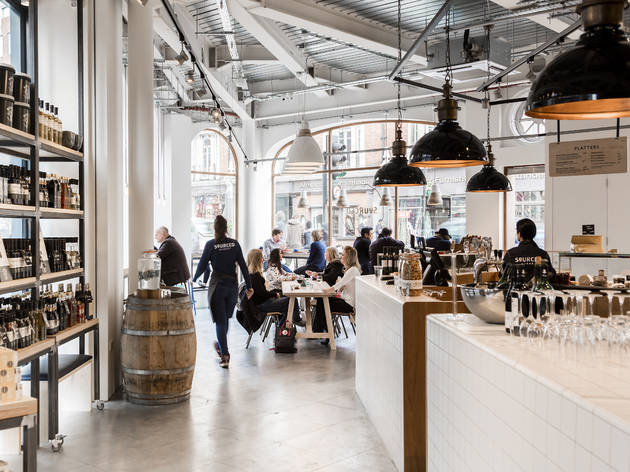 A capacious Marylebone spot for eating, drinking and filling up the larder.

The original Sourced Market might be the best thing about St Pancras International: a trove of impeccably procured food and drink, mostly from small British producers, that’s helped thousands of commuters kick their soggy station sarnie habit. Now, at last (and partly thanks to £750k in crowdfunding), there’s a Sourced II. And it’s big: an airy, spacious two-storey corner site in Marylebone that’s in danger of seriously affecting local office productivity.

You could pop in here for a quick sandwich and emerge half an hour later loaded with cheese, ham, antipasti, herb oil, jam, pickles, dried pasta, dark chocolate and gin. There’s a deli counter, a juice bar, a coffee shop with guest beans on monthly rotation, a bakery, hot food and a whole fridge full of wraps, sandwiches and salads including a plethora of veggie and vegan options. There’s an extensive selection of indie soft drinks, London beers (by the can, bottle or growler) and wines from around £10 a bottle. If you had to choose one place in London to barricade yourself in and ride out a zombie apocalypse, this wouldn’t be a bad shout.

So, no qualms whatsoever as to quantity, and quality is generally high too. A strong spanakopita and a creamy Breton kouign-amann (think croissant meets bread-and-butter pudding) suggested the presence of a truly excellent pastry chef. There were a few things to nitpick on our visit though, like a chickpea and paneer stew with no visible paneer, and a so-called burrata with no liquid centre. It’d be easier to overlook that sort of slip if prices were just a tad lower. Still, budget allowing, I could probably eat three meals a day here for a week and not get bored. And you couldn’t say that about the St Pancras branch.

4 out of 5 stars
View all reviews