As the German designer opens his first eponymous store on Regent Street, he reminds us that his underpants are not made of gold

Chanel is for the mega-rich. Is the Karl Lagerfeld range more democratic?
‘It’s more affordable, less expensive. My business partner wanted Karl Lagerfeld to be on the same level as Chanel. But I said no. People should be able to buy fashion without being ruined.’

Your face is the Karl Lagerfeld logo, and it’s all over the new shop on Regent Street. We can buy Karl dolls, Karl sweatshirts, Karl candles. Why so much?
‘It’s funny. This is not supposed to be taken seriously. I don’t take myself very seriously. Do you know they even make a Barbie dressed like me now. Not Ken, but Barbie, dressed like me. It’s a big compliment.’

Are there Karl Lagerfeld super-fans?
‘More than I want. I don’t go out in the streets anymore. They even follow me into my favourite bookshop, and it can be dangerous. Sometimes, when you don’t want to pose for photos, or if you are in a hurry, they can be insulting. But you have to pay for everything in life. I made myself easy to recognise. But to myself, I look very normal. But maybe I don’t know what normal means.’

What do you like about London style?
‘London has zillions of styles. And London is more fashion conscious than Paris in the streets. You don’t see people making that effort in Paris. And I like London Fashion Week. It’s very English. It’s not like in Paris, where everyone comes from all over the world. It’s smaller, not so much about big companies. There’s more freedom and creativity.’

Cara Delevingne is your latest muse. She’s not obviously Chanel. Why do you like her?
‘I was one of the first to work with her. People thought she was too much. But you know, she is a sweet, very well-brought-up girl who plays that side of herself. There will never be a second Kate Moss. But Cara is unique too.’

Do you prefer her at a lower weight?
‘Lily has enough personality, style and talent that you don’t have to judge her on the level of clothes.’

What five pieces should every woman own?
‘A well cut jacket, a blazer or a Chanel jacket, perfect jeans, white shirt, and a t-shirt. The rest, it depends on your life.’

What is a trend you hate?
‘You know, I don’t like to judge. I have my little world. I only see what I want to see. To the rest I’m blind. And the standards of being well-dressed and not-well-dressed are from another era. People wear want they love, what they can afford to buy. There’s more freedom. The old idea of standards set by a fashion designer have gone.’

The pressure of designing for big labels has driven designers to breakdowns and worse. Why not you?
‘I’ve done it all my life. It’s like the Olympic Games. You can’t say it’s too much pressure. If you take the big job, take the money and then play the victim, it’s not exactly what I would call honest. You are working for a big company. They have hundreds and hundreds of shops all over the world. They can’t sit there holding the hand of the designer. Impossible.’

So being a designer is a job for tough guys?
‘This job is for warriors. This is not for romantic softies. The day you sign a contract for a big job at a big company, you know what to expect.’

Are you a workaholic?
‘I hate that expression. I’m lucky that I can do what I like to do. I hate the idea of work. Work is when you have a boring job to make a living. That’s work.’

Do you ever buy cheap clothes?
‘The underwear I wear is not pure gold. But I’m in a world where I don’t have to ask myself if they’re expensive. I just get them. But you know, cheap is a word from another era.’

Do you like any of the high street brands?
‘Topshop isn’t bad at all. And I was the first designer to do H&M.’

If you had £10 what would you buy?
‘If you have this kind of problem, you buy food.’

Do you have to be rich to be chic?
‘No, if you’re not chic, all the money in the world will not help you. There are peasants in Ethiopia who are a hundred time chicer than rich women. Elegant is an attitude. It’s the way you carry your body.’

Where do you get all that energy?
‘I’m very curious. I want to see everything. I want to know everything. Through magazines and books. I’m such a book freak.’

You’re 80. Any plans to retire?
‘So many people would love it, to get all my great jobs. But what for? I’m not tired, so I don't have to retire.’ 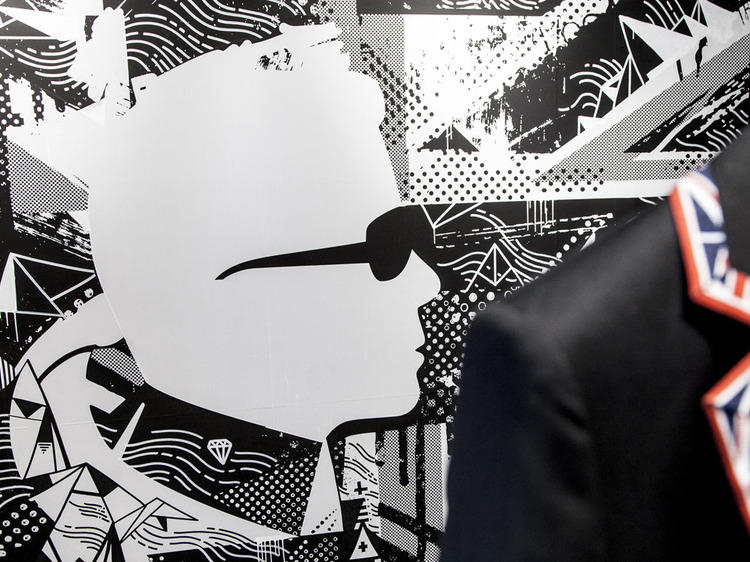 While Chanel and Fendi are supremely luxurious, unattainably expensive and rather reverential when it comes to the business of fashion, Karl Lagerfeld's own label takes a more light-hearted approach to getting dressed. This, KL's first dedicated UK store, is something of a temple to the man himself.