My Account My Profile Sign out
My Account
Search
Worldwide Europe United Kingdom England London The Globe goes global: behind the scenes of the biggest tour in theatre history
Advertising

Four centuries ago, the first ever touring production of ‘Hamlet’ called in at Freetown, Sierra Leone. Sort of. It was performed, in 1607, on a deck of the British merchant ship Red Dragon, which was anchored off the spot where the West African country’s capital would later be founded. But nevertheless: it’s the first recorded instance of an overseas performance of a Shakespeare play.

One humid afternoon, 409 years later, I’m sitting at a table in colourful, chaotic twenty-first-century Freetown with Ladi Emeruwa and Naeem Hayat, the two young Londoners bringing ‘Hamlet’ back to Freetown for show number 176 of a scarcely believable world tour. They’ve been taking turns in the title role – it’s far too demanding to expect a single actor to do it for two years – on a trek that’s taken in (almost) every country on the planet. The brainchild of Shakespeare’s Globe, this touring ‘Hamlet’ is a good-humoured, lively, music-heavy production that brings the boisterous spirit of the Globe to people who would normally never get the chance to go there.

The tour was meant to hit Sierra Leone much earlier in the run, but the country was stricken with ebola. Fortunately, the epidemic has been contained, so Emeruwa, Hayat and the 14 actors and crew with them on this remarkable adventure have been able to nip in before zipping off to fill in a few more blanks on the atlas that circumstances and global events have kept them away from, including Iraq and Afghanistan. Which sounds kind of terrifying. But the Hamlets are sanguine.

‘If the Home Office says it’s safe, I’m comfortable with it,’ shrugs Emeruwa, ‘and if not, we don’t go.’ There can only be one final destination, though. After two years on the road, this extraordinary production is returning to where it started: London, for four shows at Shakespeare’s Globe this weekend. It’s not just any weekend, either. This Saturday is the 400th anniversary of Shakespeare’s death, so the returning ‘Hamlet’ will serve as a centrepiece of sorts to a series of events loosely grouped as Shakespeare400.

An evening performance next to Nelson's Dockyard, Antigua

‘If the Home Office says it’s safe, I’m comfortable with it’

Back in Freetown, Emeruwa and Hayat are notably older and wiser than when I interviewed them in 2014 during rehearsals (and have endured a few more bouts of diarrhoea). But they don’t hate each other, which is pretty impressive given that I’ve interviewed bands who have stopped talking to each other after two days on the road, never mind two years.

And they’re still revelling in their role as ambassadors for not only Shakespeare’s ambiguous masterpiece but also for Britain and London. In a world where our most popular cultural exports are still ‘Downton Abbey’ and ‘Top Gear’, this touring company is conspicuously diverse. It mirrors the reality of our city, and it’s a thrill to see it shared with people who probably thought we were all posh white dudes.

‘There was a really fascinating article by a guy in Thailand,’ says Hayat. ‘His immediate reaction was: “Oh God, this is just cultural imperialism.” But he saw the show and as he learned more about what it is we’re doing, he came to realise it was a good thing.

The cast chat to a school group in Lagos, Nigeria © Dave McEvoy

’“Hamlet” is about human existence and what it means to be human,’ says Emeruwa. ‘What I find interesting is how your political and social standing and outlook can really affect how you take it in. People have had dramatically different responses. A woman in Kenya said “It’s about women’s rights” – that’s brilliant.’

The play’s depiction of an unstable Danish court has proved particularly resonant in some places. Near the beginning of the tour, ‘Hamlet’ called at Kiev on the eve of the 2014 elections that split the country in two. Future president Petro Poroshenko was in the audience: ‘ “The play’s the thing, to catch the conscience of the king,” ’ quotes Hayat. ‘I said it to him and it definitely hit home. You could feel it in the room, you could feel them responding to the words.’

Capturing the action in a refugee camp, Syria © Sarah Lee

‘Hamlet's about human existence, what it means to be human’

Similarly edgy atmospheres prevailed in Ramallah, Palestine, just as the 2015 wave of stabbings started in Israel; and in Burundi, the week before its failed coup. The most widely reported incident on the tour was a show in the Calais ‘Jungle’ that had to be aborted due to audience unrest (the pair blame the ad hoc nature of the performance on a cold day). And the tour has had to perform to diasporas or refugee populations of certain countries that have been made inaccessible through war or terrorism (notably Syria).

But the big one that got away is North Korea: the prospect of ‘Hamlet’ there led to many headlines, but it didn’t happen. ‘We were so disappointed,’ says Emeruwa. ‘The North Korean visa application didn’t actually have a category for theatre, just acrobatics and gymnastics. We were thinking of trying to come in as acrobats, but no.’

‘It's been translated into over 75 languages, including Klingon’

Shakespeare really is the world’s playwright. ‘Hamlet’ has been translated into more than 75 languages, including Klingon, and the Bard’s works have inspired films across the planet, from Hollywood to Japan and Bollywood. The tour has been intoxicating and magical. But now that it’s about to end, what has it achieved? I turn to the man who dreamt it up, Globe artistic director Dominic Dromgoole, who will step down on Sunday after 11 years, mission accomplished. He gives me a perfectly elusive answer. ‘I have no idea what the tour has achieved,’ he says, helpfully. ‘The only reason to do anything like this is in the hope that you encourage others, now and in the future, to do more, and better.’

'Hamlet' will be at Shakespeare's Globe, Sat Apr 23-Sun Apr 24 2016. Returns only but 25 £5 tickets per performance will be avaliable by lottery via the TodayTix app. 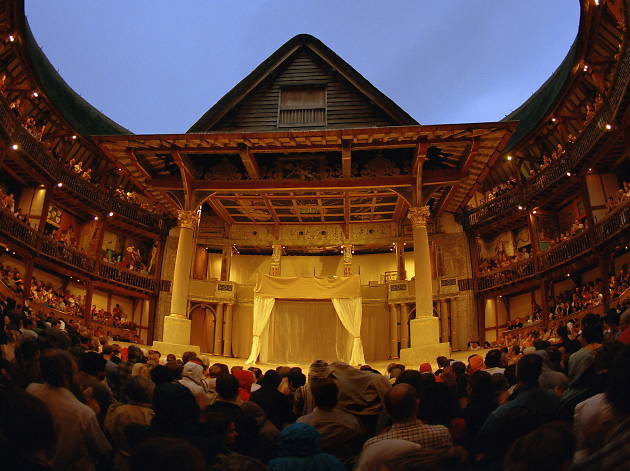 Hold onto your writing quill, Bard fans, as this year marks the 400th anniversary of Shakespeare's death – and boy are we celebrating (not the fact he died, obviously, more the fact that he is literally the world's greatest playwright). To mark the occasion, London is hosting a banquet of Shakespeare-themed events throughout the year because there ain't no party like a 400th year party.