London’s museums are full of strange and peculiar exhibits. Who better to highlight the oddest examples than the man behind London’s Museum of Curiosities? Here, Viktor Wynd picks out the strangest things to see, from curious artworks to mummified genitalia.

RECOMMENDED: More great things to see and do in London

11 of the best museum oddities 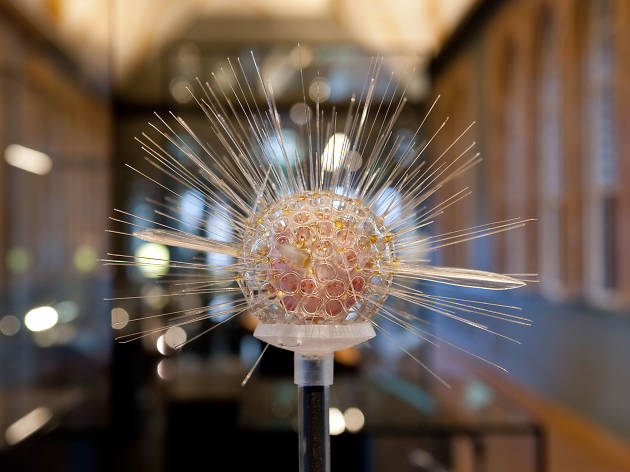 These tiny, delicate marine models are so realistic they look like they could swim away. The incredibly accurate and intricate specimens are crafted entirely out of glass, using a technique that no one has been able to replicate since. The secret died with Leopold Blaschka and his son Rudolf, who made more than 10,000 models between 1866 and 1889. Talk about quality father-and-son time.

Viktor says ‘My favourite things in the world are deep sea creatures. The fact that the Blaschkas managed to make them out of glass adds a new level to their otherworldly beauty. Visit the tiny Cadogan Gallery – that’s where they keep them.’ 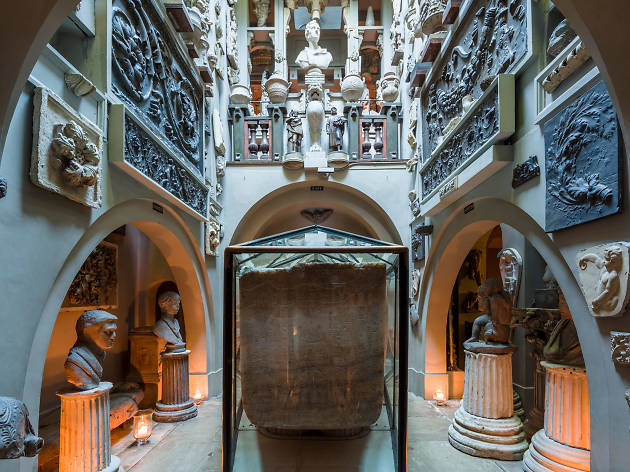 King Seti’s sarcophagus is a sight to behold. It’s been sitting in Sir John Soane’s Museum since the 1820s, shortly after it was discovered in the Valley of the Kings. The regal resting place was painstakingly crafted out of two monolithic blocks of alabaster and is inscribed with religious scenes and figures. It’s considered one of the most important objects ever found in Egypt and makes for fascinating viewing, even if it’s probably not quite the afterlife the Egyptian pharaoh had in mind.

Viktor says ‘When John Soane bought it, he used it as an excuse to give a good party, and I think there are few things I would rather party around than a huge sarcophagus.’ 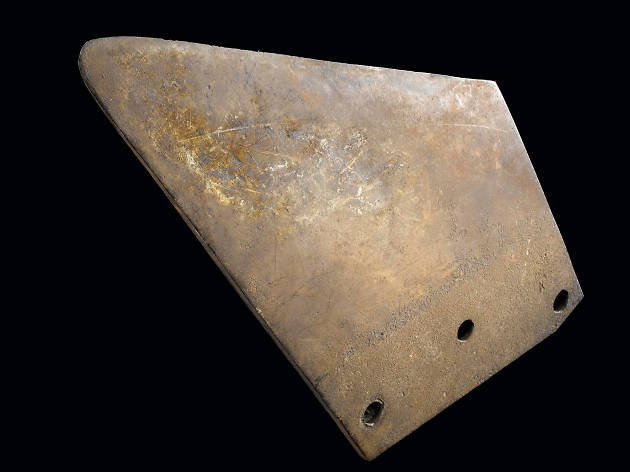 It’s looking rather timeworn these days, but this slice of steel, designed to provide a more ‘humane’ beheading, was once seriously sharp. The blade was bloodied at the 1794 execution of Jean-Baptiste Carrier who was convicted of war crimes after the French Revolution. Feels like ancient history, right? Except the guillotine was used in France up to 1977. It’s enough to send shivers down your – hopefully unsevered – spine.

Viktor says ‘I think it’s so amazing to look at a small piece of metal and imagine the number of heads it has chopped off. It fills me with envy and desire. I long to own it.’

On loan from the Science Musuem 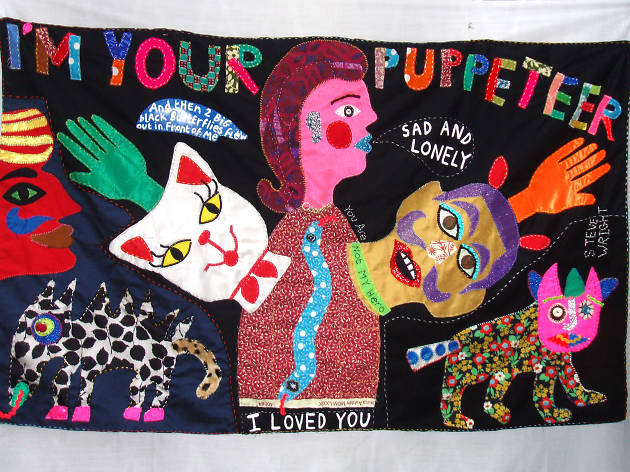 House of Dreams is packed to the rafters with curiosities: doll heads, false teeth, kitsch mosaics. This zany tapestry, featuring animal imagery and human faces, is one of them. Artist Stephen Wright says: ‘It records events that have happened in my life, and is combined with experiences I had when I visited Mexico City and Oaxaca around 2009, when I met my guardian angel for the first time.’

Viktor says ‘It’s one of the first pieces by Stephen Wright I ever saw, and for some reason I sort of see it as a portrait of me.’ 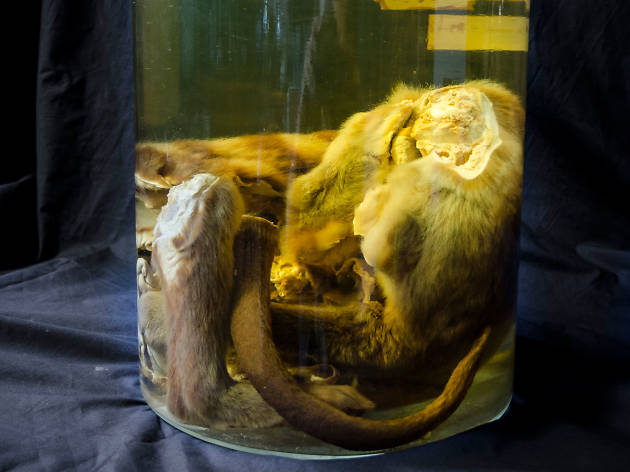 The last known thylacine, aka the Tasmanian tiger, died in captivity in 1936, but you can still see part of one preserved in fluid at the Grant Museum. Shy, nocturnal and not dissimilar in appearance to a medium-sized dog (aside from a kangaroo-esque pouch), it was native to Australia, Tasmania and New Guinea. There have been a number of supposed thylacine sightings in recent years, but sadly none has been confirmed.

Viktor says ‘It’s the most amazing extinct mammal from Australia. It’s very beautiful, and very sad. There is still existing film footage of the last living thylacine. I collect things to do with extinction.’ 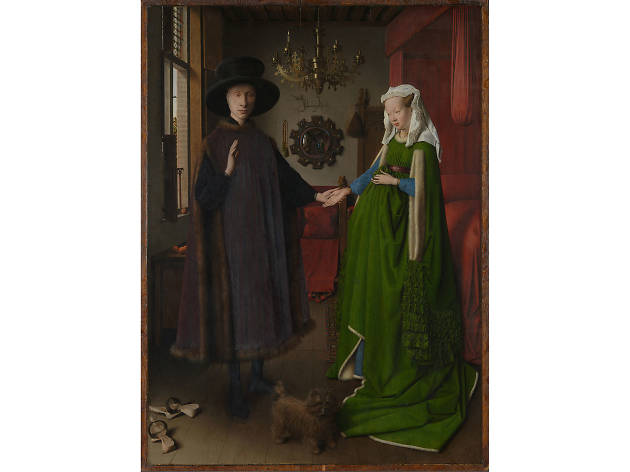 You’ll probably recognise this grand oil painting of a man in a rather impressive hat and his seemingly pregnant lady friend. It’s considered one of the most complex paintings ever produced; its light, shade and exquisite detail have been praised while its meanings and hidden messages have been long debated. The story and identity of the painting’s richly dressed subjects remains unclear. It could be one of art history’s biggest riddles.

Viktor says ‘When I was at art school, I went to the National Gallery every week, and I would sit in front of this for an hour or so. I still don’t know what it’s about. I think it’s fairly meaningless to go around a gallery and look at everything. It’s important to look at things that mean something to you, and build a relationship with them over time.’ 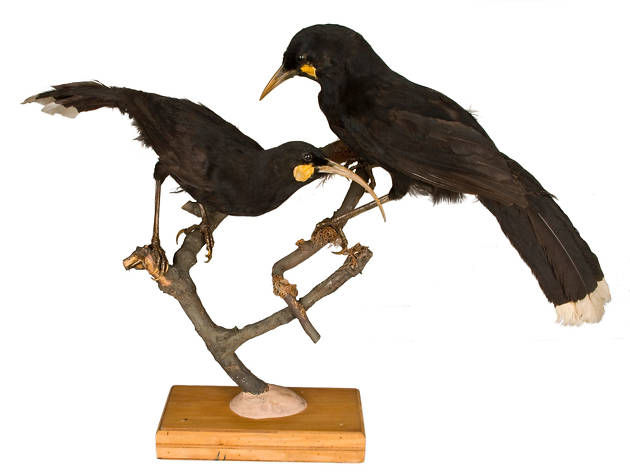 Black and greenish with a fleck of brilliant orange, and long tail feathers finishing in a broad white band, huia were beautiful creatures, sacred in Maori culture. But they are no more: the huia was declared extinct in the early twentieth century as a result of mass deforestation. They were also aggressively over-hunted, to satisfy the demand for fancy feather hat decorations and taxidermy. This mounted example is a sombre reminder of the bird species’ end.

Viktor says ‘We’re going down the extinction line. I’m fascinated by extinct birds. The huia is such an iconic and beautiful bird. I think I probably first saw them at the Horniman Museum as a child.’ 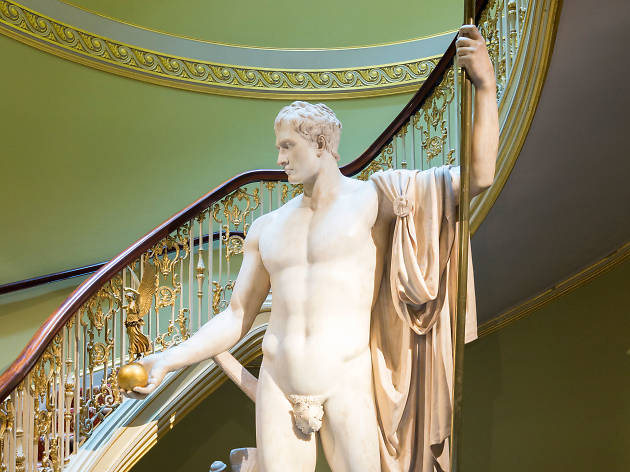 Before Insta filters, there were forgiving artists’ impressions. Napoleon Bonaparte commissioned this huge marble statue in 1802. It depicts his head on the body of the Roman god Mars. When he saw it in 1811, Boney felt it bore so little resemblance to his portly IRL figure that he ordered it to be removed from the public gaze. Now you can gawp at the 3.5-metre-high nude for as long as you please.

Viktor says ‘I love peeking at the sculpture’s willy underneath the vine leaf. It’s like looking up a man’s kilt; you can still see the business. I don’t know if it’s true, but I was told [the leaf] was added for Queen Victoria’s visit.’ 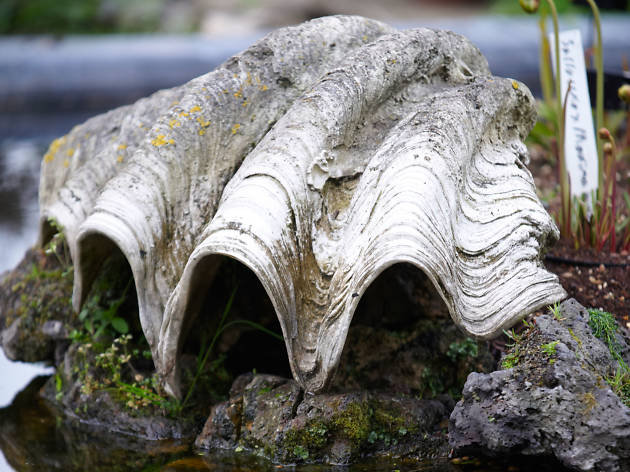 The Pond Rockery in the Chelsea Physic Garden is the oldest in Europe. Set in the middle of the pond, this huge shell sits alongside bricks, basalt and pieces of masonry from the Tower of London. Apparently it was swiped from Tahiti by Captain Cook, who brought it back from a voyage on the South Seas. It’s a miracle it hasn’t ended up in a carefully designed Chelsea living room.

Viktor says ‘I’m obsessed with giant clam shells. I saw them in Peter Greenaway’s film “The Cook, the Thief, His Wife & Her Lover”. They are magnificent.’ 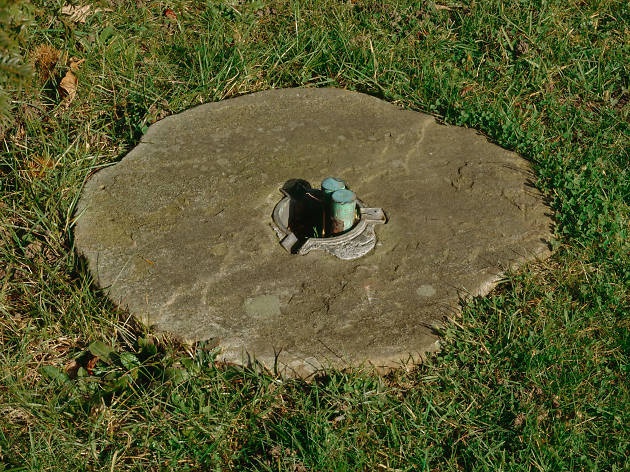 Mention Darwin and you probably think of the exotic Galapagos Islands, but much of his work took place on his 16-acre estate in Kent. Down at the bottom of Darwin’s garden sits an unassuming circle of stone. It doesn’t look like much, but this disc was one of the famed naturalist’s experiments. He used the gradually sinking stone to measure the displacement of soil by earthworms. Impressive garden gadgetry indeed.

Viktor says ‘I remember first going there as a child, and you look at it, and it’s just a stone, but then you see how it’s slowly sinking into the ground, as the worms move the soil around it. It’s such a beautiful place, and you realise that time is not only measured in seconds or minutes. To some extent, time can be measured by the rate at which a worm shifts soil around a stone.’ 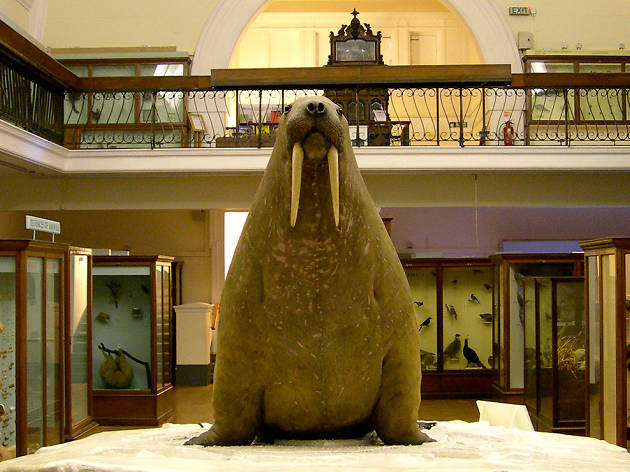 Our collection of seven must-see things inside our city’s finest institutions.