Made up of two main parks—the nearly seven-decade-old Disneyland and the newer Disney California Adventure—this themed resort is a winner with tourists and locals alike. You’ll find all your favorite characters here—including the recent arrivals of the Star Wars-themed Galaxy’s Edge and the Marvel-themed Avengers Campus—along with a clutch of super fun rides and pricey food and drink. There’s not really a good time to go to avoid the crowds—it’s always busy, especially around Christmas—so you might need a bit of patience to appreciate the magic.

Just a quick primer first: Disneyland Resort refers to the Disney-owned plot of land in Anaheim that includes the two theme parks as well as a trio of hotels and the Downtown Disney shopping district. You can buy an admission ticket to just a single park, or you can pay up for a Park Hopper that let’s you go back and for between the two (their entrances are directly across a pedestrian plaza from each other).

If you’ve never been before, you’ll probably want to consult our best Disneyland rides and best Disneyland food stories, as well as a primer on Disney Genie, but we’ll give a quick rundown below of everything that’s on offer.

Walt Disney’s original 1955 park is packed with must-do attractions spread over nine lands, all immaculately themed in every detail and bursting with charm. Main Street, U.S.A. embodies turn-of-the-19th-century America (just with more gift shops and corn dogs), while Frontierland and New Orleans Square channel the American West and the bayou, respectively. Adventureland offers thrills of the jungle variety; Tomorrowland is a look into the retro-future; Critter Country is the wooded home of Winnie the Pooh and Brer Rabbit; and Fantasyland is where Disney’s animated films come to life. As for the iconic mouse, you’re most likely to find him scurrying about with his pals in Mickey’s Toontown. The latest land, Galaxy’s Edge, brings Star Wars universe to life with a new planet, the astoundingly fully-realized Batuu.

But most people, of course, are here for the rides. Among the best are Space Mountain (located in Tomorrowland), a legitimately thrilling indoor rollercoaster; the epic Indiana Jones Adventure (in Adventureland); the slow-moving but atmospheric Pirates of the Caribbean (in New Orleans Square); and the Matterhorn (in Fantasyland), a breakneck bobsled ride. Those sit alongside more tame mid-century classics like Peter Pan, It’s a Small World and the Enchanted Tiki Room. Stay through the evening and you’ll typically be rewarded with a nighttime parade and fireworks show, as well as the riverfront, pyrof-filled Fantastmic! stage show.

In 2001, Disneyland’s former parking lot opened its doors as a celebration of the geography, culture and history of California. (And also booze: Unlike most of Disneyland, it serves alcohol.) Some more recent renovations have pulled the park further from its California theme, for better or worse. You’ll enter through Buena Vista Street, a recreation of L.A.’s Eastside in the 1930s, and stroll along the backlots of Hollywood Land and the Sierra-inspired Grizzly Peak. Meanwhile, the alfresco food courts at the Pacific Wharf and Paradise Gardens Park channel the Bay Area. But much of the rest of the park has taken a turn toward Disney properties instead of California sites: Pixar Pier brings together animated characters into a carnival setting, Cars Land features an astonishing recreation of the franchise’s Route 66 and Avengers Campus has brought Marvel characters like Spider-Man and the Guardians of the Galaxy into the fold.

While DCA, as it’s often referred to, features fewer rides than Disneyland, it’s home to some of the resort’s highest-tech thrills. The beautiful Soarin’ (in Grizzly Peak) uses a massive screen and wind in your face to simulate hang gliding, Toy Story Midway Mania packs wildly amusing carnival games into a single ride, Radiator Springs Racers sends passengers careening through canyons and into the world of Cars while Guardians of the Galaxy: Mission Breakout catapults and plunges riders in a Marvel-themed drop ride. Make sure to see the incredible World of Color water show each evening.

If you park in the resorts massive parking garage, you’ll venture through Downtown Disney on your way in. The outdoor shopping district has seen an uptick in worthwhile vendors in recent years, including Splitsville, Black Tap Craft Burgers & Shakes, Ballast Point Brewing Co., Salt & Straw and Sprinkles. The area’s adjacent to the Disneyland Hotel (home of the excellent Trader Sam’s Enchanted Tiki Bar) and the Grand Californian Hotel & Spa, as well as the Paradise Pier Hotel just up the street. 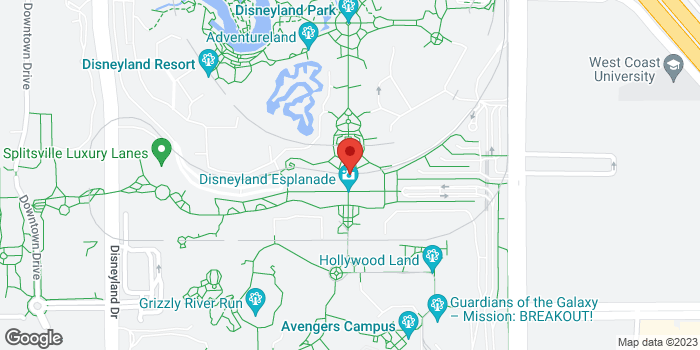