Whether you’re a smuggler, an evil emperor, some Rebel scum or an ewok, it’s finally here: After years of planning and teases, Disneyland’s ambitious and transportive new land, Star Wars: Galaxy’s Edge, opened on May 31, 2019, in a galaxy right here.

Sure, there are fantastic rides within the larger park already, but Disneyland’s Star Wars: Galaxy’s Edge is a whole other world—literally. The immersive new section brings the Star Wars universe to life with a new planet—Batuu—transporting you to it with a whopping 14 acres of immersive, painfully detailed terrain. Here’s our guide to all things Galaxy’s Edge, so you can make the most of your Disneyland visit.

No, it’s tucked into the back corner of Disneyland, near Frontierland. It’s not a separate park, but entering it should theoretically feel like you’ve stepped into a different world (er, galaxy).

Is there an extra admission charge?

Nope, access to the Star Wars area is included with a Disneyland park ticket, though prices vary by day. Single-day Disneyland-only tickets begin around $104, while “park hopper” passes—which provide access to both Disneyland and the California Adventure park—begin around $154.

Though typically you can stroll right into the land, if the park is particularly busy you’ll need to join a virtual queue, in which you’re assigned a “boarding group”—as needed—via the official Disneyland app. But we haven’t really seen this used since opening day. However, the Rise of the Resistance attraction has its own separate virtual queue—which we’ve detailed below.

How can I skip the lines?

Unless you’re some sort of Jedi master with a command of mind tricks, there’s sadly no way to skip the lines here. Disney isn’t offering its timed ride vouchers (FastPass or MaxPass) for the two rides in Galaxy’s Edge, though they may change that policy in the future.

What can you actually do there?

Star Wars: Galaxy’s Edge drops you right into a new world, specifically planet Batuu and its trading hub, Black Spire Outpost. You’ll be surrounded by droids, aliens and smugglers as you wander through the immersive new section of the park.

You can choose the path of darkness and align with the First Order, or join up with the Resistance and choose the path of light, at two very different recruitment and supplies outposts. Those looking to explore some of the fuzzier corners of the galaxy can head to the Creature Stall, to cuddle and even take home a new pet from another planet. For the most part, you’ll simply want to explore—with 14 acres of shops, attractions and plenty of costumed characters, there should be more than enough to keep you busy.

5 things we wish we knew before riding Star Wars: Rise of the Resistance

It's the most amazing ride we've ever been on—but we wish we knew these 5 things beforehand. Find out more about Rise of the Resistance: http://bit.ly/36520wV

What are the rides?

While there’s plenty to see within Galaxy’s Edge, there are only two conventional attractions. Millennium Falcon: Smugglers Run, which opened with the land, puts you in the pilot’s seat of Han Solo’s infamous ship, the Millennium Falcon. From your chair in the cockpit, you’ll be able to jump hyperspace in the fastest ship in the galaxy, then deliver—OK, smuggle—goods for Hondo Ohnaka. Just try not to get shot at, will ya?

The second and newer ride is unlike anything we’ve ever seen before. Not only does Star Wars: Rise of the Resistance bring you behind First Order lines and up close and personal with the likes of AT-ATs and Kylo Ren—it drops you right into the action with a very special mission: Join Rey, Finn and BB-8 to defend the location of Princess Leia (that’s General Organa, to you) and help save the galaxy from the First Order. Of course, nothing goes as planned, and the three-part adventure will have you flying through space, mingling with Stormtroopers, escaping General Hux and the Supreme Leader, plus taking part in an all-out battle waged by none other than Poe Dameron—then soaring back to safety on Batuu. Long live the Resistance.

Because Rise is a new attraction, you’ll need to join the “virtual queue” in order to ride; think of it as a rolling reservation system for this galaxy far, far away. Once you enter Disneyland, open up the park’s official phone app and “join a boarding group,” which will assign a number for you and the rest of your party to head to the Resistance’s holdout on Batuu. While you wait to board, stroll through Black Spire Outpost and and be on the lookout for the most dependable droid ever built, R2-D2, who’ll be happy to talk, er, beep at you in conversation. Eventually your number will come up in the app (you’ll also receive a push notification), at which point you’re welcome to hop in the line.

What about the shops?

Try not to spend all your galactic credits all in one place, tempting as it may be. Star Wars: Galaxy’s Edge promises exclusive and collectible merch unlike any other, so budget accordingly. For a fee, you can build your own lightsaber at Savi’s Workshop, where you’ll hand-assemble your weapon guided by themes of peace and justice; power and control; elemental nature; and protection and defense.

Savi’s is already proving one of the most popular destinations in Galaxy’s Edge, so up to 60 days in advance, you can make a reservation for you and your friends if you want to visit. Check availability through disneyland.com or through the app, then enter a credit or debit card—you’ll be charged the full $199.99 if you’re a no show. At least one member of your party should be 14 years or older, and all members should be present at check-in. You’ll need to provide your confirmation, as well as photo IDs and the same credit or debit card used to book the reservation, then you’ll be ushered into a hidden alcove where you can assemble your lightsaber safe from the gaze of the First Order.

Want to add lightsaber accessories? Wander over to Dok-Ondar’s Den of Antiquities, where you’ll find more lightsabers, plus jewelry, statues, collectible merch and other trinkets worth bringing back to your home planet. And if you need a change of clothes (hey, you might be on the run), there’s the Black Spire Outfitters attire shop.

Is there an intergalactic cantina?

You’d better believe it, and you’d also better believe that it’s the only spot serving alcohol in Disneyland proper that’s open to the public (as opposed to, say, the members-only Club 33).

Just like the Savi’s Workshop lightsaber experience, you’ll want to make a reservation for Oga’s Cantina via the website or the app up to 60 days in advance. Remember that all members should be present at check-in, and keep your confirmation handy. Once in, it’s all gurgling, foaming, bubbling intergalactic cocktails and non-alcoholic concoctions in one of the coolest settings in the park.

What other food and drink is there?

The Galaxy’s Edge teams went all out to build an immersive land, and the food is no exception. Is that a pork spare rib you’re eating, or some kind of Kaadu? Find out inside Docking Bay 7 Food and Cargo, a working starship hangar that’s also home to Tugg’s Grub restaurant, which serves food from all over the galaxy (think: salads, cakes and even some Ithorian garden loaf, a plant-based take on meatloaf.)

Wander the rest of Black Spire Outpost to find smaller vendors such as the blue-milk stand—you’re just like Luke!—who’ll be hawking eclectic snacks. 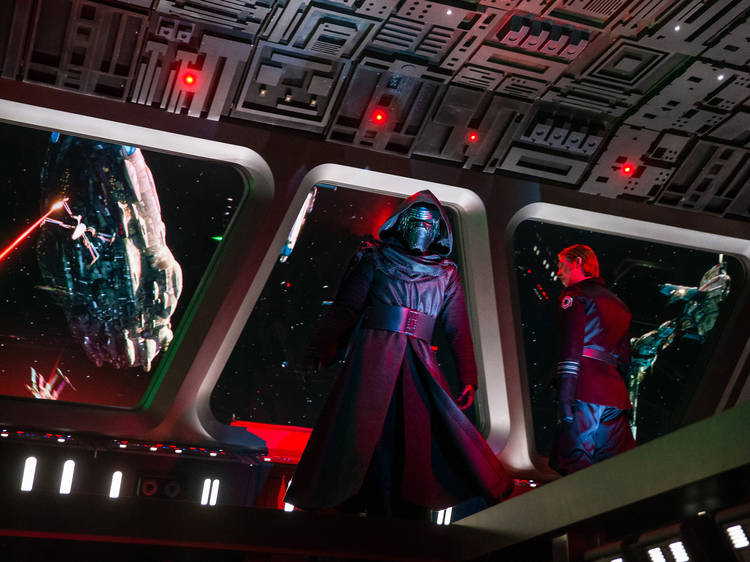 “Is Kylo Ren wide enough?” and other first reactions to Disneyland’s new ‘Star Wars’ ride, Rise of the Resistance 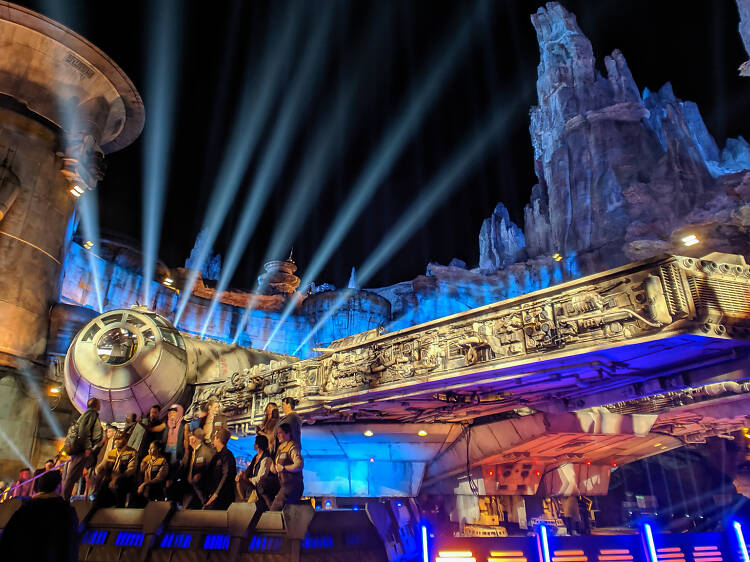 The 6 things you need to see and do at Disneyland's Star Wars: Galaxy's Edge 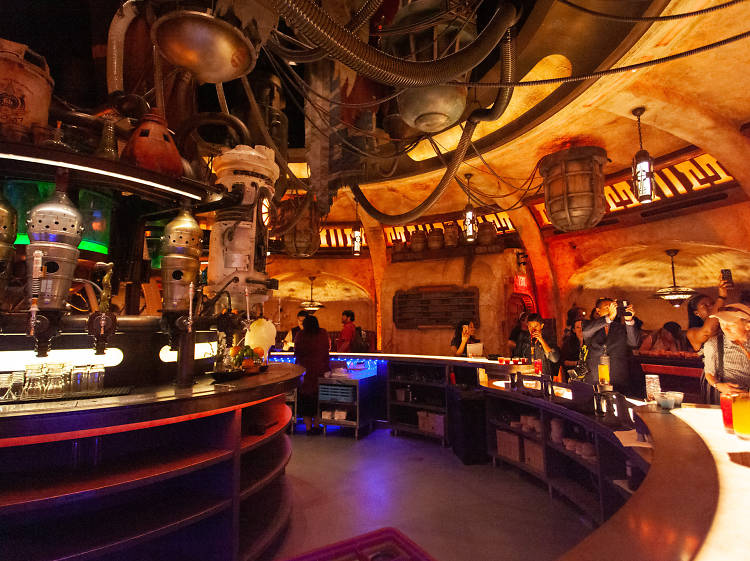 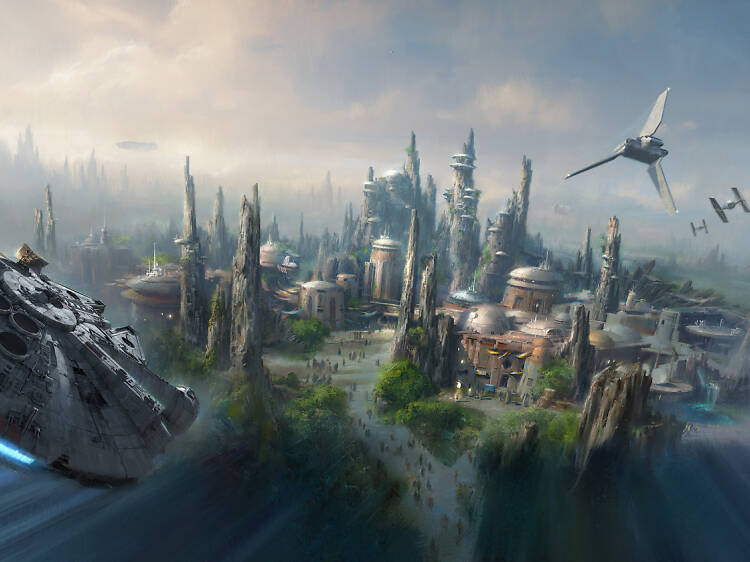 At least at first, you’re going to need a reservation. Here's how to get one. 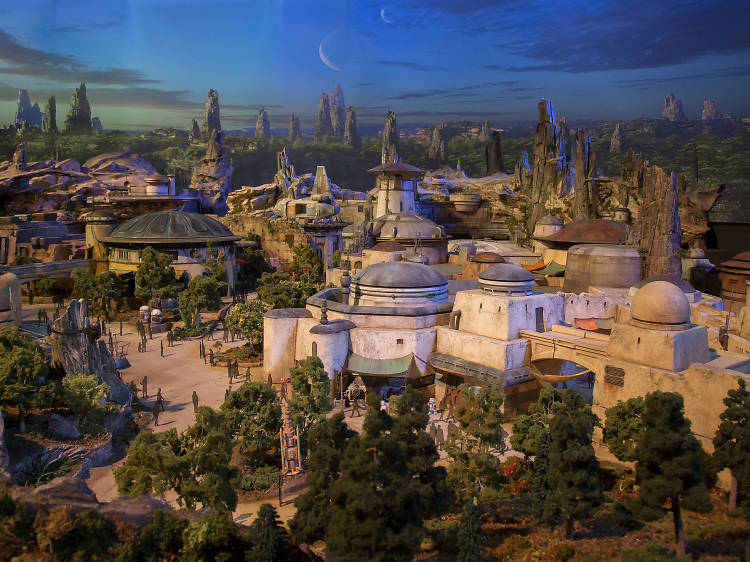 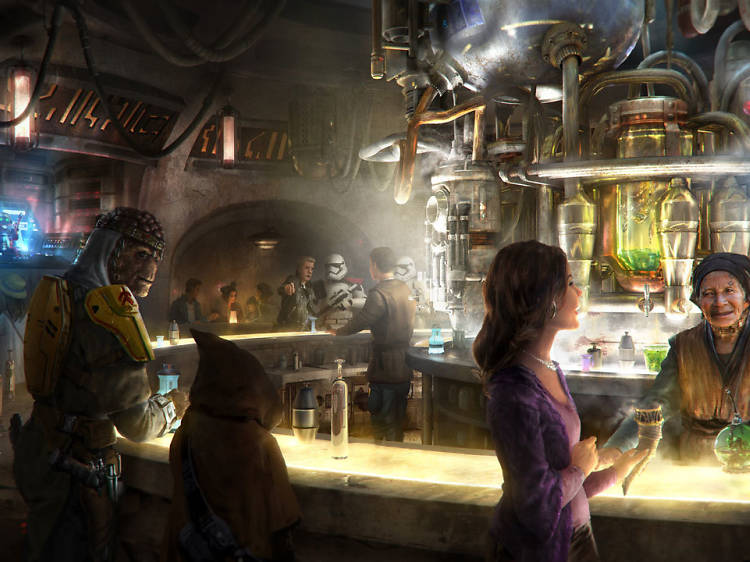 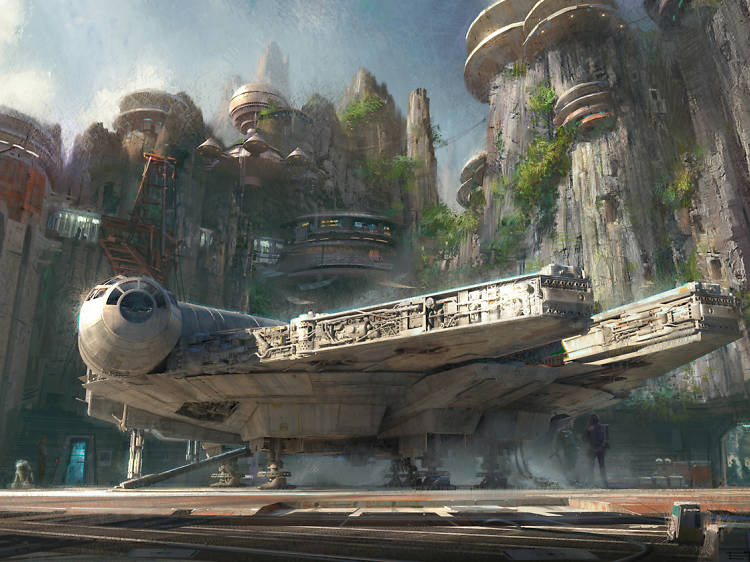 Star Wars: Galaxy’s Edge is opening at Disneyland in 2019