Spending a day at Disneyland is practically a rite of passage for Angelenos. But as you trek around the two theme parks, it’s easy to let crying children, aching feet and overwhelming crowds come between you and the top things to do (i.e. the front seat on Space Mountain). Thankfully, we’ve put together these essential Disneyland tips to ensure that your visit to the beloved attraction lives up to the tagline of “the happiest place on earth.”

Looking for Star Wars: Galaxy’s Edge tips? Since the themed land required timed reservations for its first month and still has one more ride set to open, we actually can’t quite offer tips for what it’ll be like once it’s open to the public sans reservations. But you can find out everything else about the area in our Star Wars: Galaxy’s Edge guide.

Have any tips of your own that you’d like to share? Let us know in the comments. 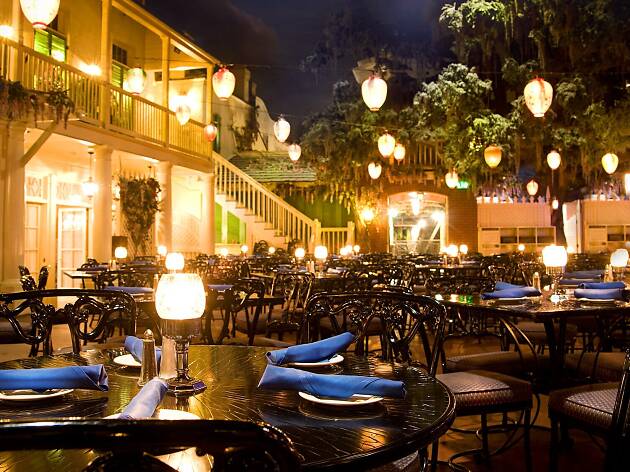 We’re not saying you should plan your day to the minute—that’s not fun for anyone—but keep in mind that there are over 50 attractions between the two parks, and that doesn’t even count shows, shops and restaurants. It’s a lot to manage, so we suggest adding a bit of structure to your day: Are there any parades or nighttime shows you want to see? Do you have dinner reservations? Which FastPasses should you get first? (See tip #2.) These are all timely events that you should absolutely build your day around.

In general, a little bit of research is always a good idea. Ticket prices fluctuate between three price tiers based on any given day’s predicted demand. If your entire trip hinges on a certain ride, make sure to check the construction schedule. If dinner at Blue Bayou is a must, for example, make reservations online (up to 60 days in advance). Have a toddler with you? Make sure to check the ride height requirements. Just remember not to get too attached to your plans: Rides break down, lines swell and Disney doesn’t control the weather, so make sure to have a backup itinerary.

Pro tip: Not sure how crowded it’ll be? Check out some predictions and weigh those against the annual pass blockout dates (try not to visit on some of the last days before or first days after an extended passholder blockout). 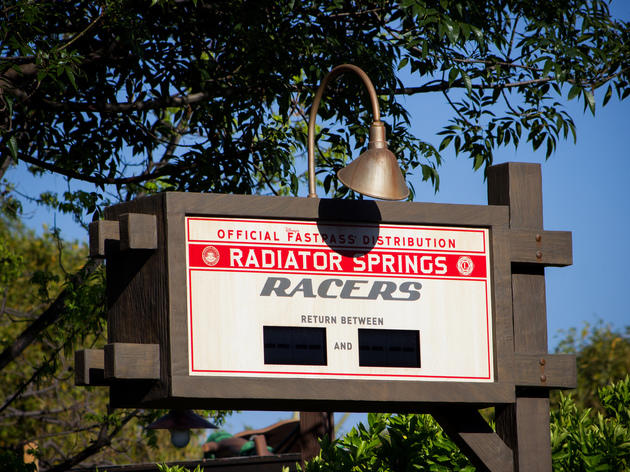 Even on a cold, rainy February weeknight you’ll still inevitably face the most despicable of all Disneyland rituals: waiting in line. Enter FastPass, Disney’s free, ride time reservation system, and your best bet at avoiding lines. The short of it is these passes (available at some of the parks’ most popular attractions) are stamped with a specific return time that’ll allow you to hop on a separate, express line. You’ll have to board the ride within the hour window printed on the ticket, and, generally, you can only hold one FastPass at a time; you can only get a new one after two hours or the start of your return window, whichever comes first.

Maximizing your time becomes a numbers game, and it’s one you should absolutely play. So where should you start? Begin your morning at California Adventure and get FastPasses for World of Color and Radiator Springs Racers, which is typically one of the first rides to run out of passes. Afterwards, head to Disneyland and as soon as you can reserve another FastPass, we suggest going for Indiana Jones or Space Mountain, as well as one for Fantasmic.

Disney has also rolled out MaxPass, a $15 per person ticket add-on that lets you book all of your Fastpasses digitally. You’ll save time and miles by not having to physically reserve a time at each respective ride. If you go this route, you typically want to reserve a pass for whatever has the closest return time; if you play your cards right, you could end up with fresh Fastpasses as frequently as every half hour. Do keep in mind, though, that MaxPass won’t let you reserve Fastpasses for a ride that has already run out of passes for the day; show up early to make the most of your MaxPass purchase, as we don’t recommend the expense for parkgoers visiting later on in the day.

Pro tip: Struck out with passes for the major thrill rides? Consider using the single rider line if you’re okay being split up from your group. On Radiator Springs Racers especially, this can sometimes knock the line down from over a two-hour wait to less than 30 minutes. Check out Disneyland’s site for a full list of single rider attractions. 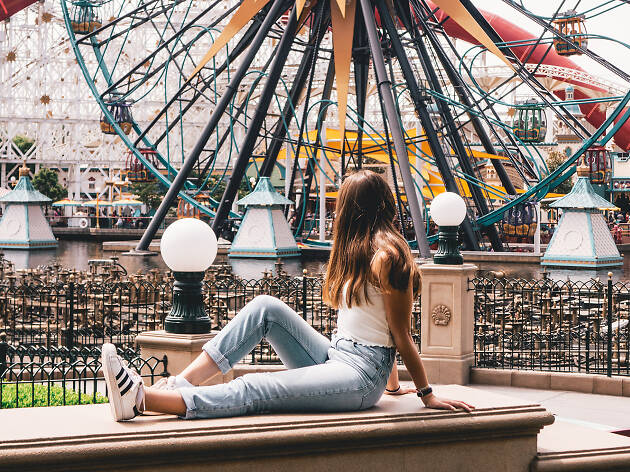 We’re a pretty handsome bunch in Southern California, but a trip to Disneyland shouldn’t be a fashion show. Comfort trumps style, and, with all due respect to the fine folks who frequent Disneyland, there will always be someone dressed worse than you. Decide on a pair of shoes that you won’t regret eight hours later. It’ll probably be cool (if not outright cold) in the morning and after dark, but roasting in the afternoon sun; wear a hat and sunglasses, and carry around a sweatshirt or consider renting a locker (lest you want to trek back to your car or hotel).

Pro tip: Pack an extra pair of socks if you plan on riding Splash Mountain or Grizzly River Run. Nobody likes blisters and stinky socks. 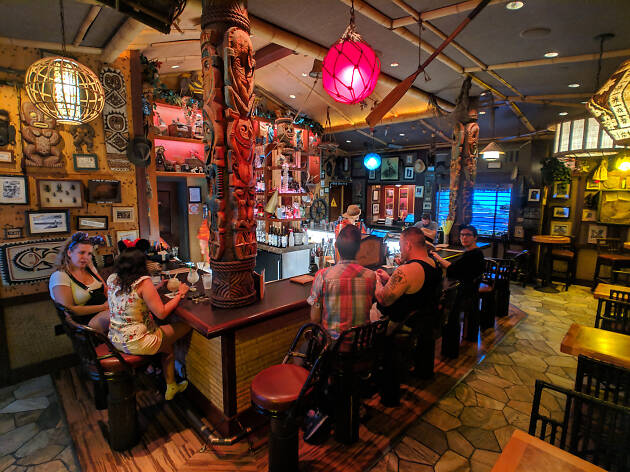 If you’re staying from opening until closing, Disneyland can be a grueling 12-plus hour day. In between tearing through empty rides in the morning and navigating the nighttime spectaculars, slow things down in the afternoon.

Ride out the post-lunch sleepies with a loop around the Disneyland Railroad, a tropical serenade inside the Enchanted Tiki Room or an American history refresher on Great Moments with Mr. Lincoln. In California Adventure, the Frozen musical and the Animation Academy are all relaxing (and air conditioned) options. Consider a caffeine boost from the Starbucks located on Main Street, Buena Vista Street and in Downtown Disney.

Pro tip: If you’re looking to soldier on with a bit of liquid courage, stake out a seat on the patio at Lamplight Lounge at California Adventure or hole up in Trader Sam’s at the Disneyland Hotel (be warned, though, that both have become increasingly popular). 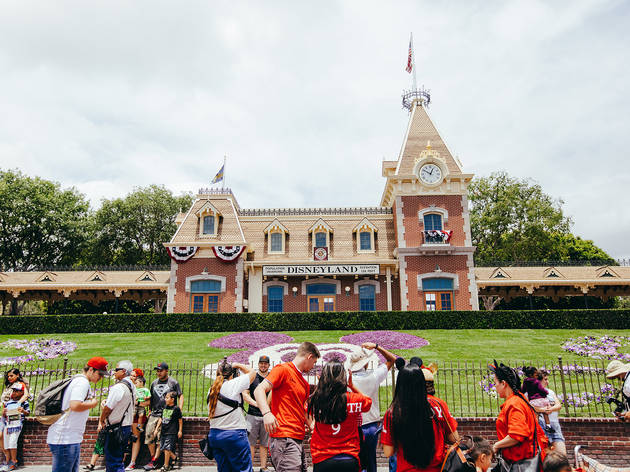 You’re planning for a day at Disneyland, not a week in the desert, so don’t bring more than you can comfortably sling over your shoulder or in a ride vehicle seat back pouch. Don’t forget sunscreen and make sure to bring a reusable water bottle. Unless you plan on sustaining yourself on corn dogs and churros—which sounds wonderful, honestly—consider stashing a few small snacks in your bag, too. And while Disney caters to many common food allergies, consider packing a few extra bites if you have any specific dietary restrictions. A backup phone battery or charger is a good idea, as well; you’ll also find chargers built into the Main Street lockers (currently down at the time of publication).

Pro tip: Consider turning off your data or going into airplane mode, especially on reception black holes like Indiana Jones and Soarin’, to keep your phone running all day. 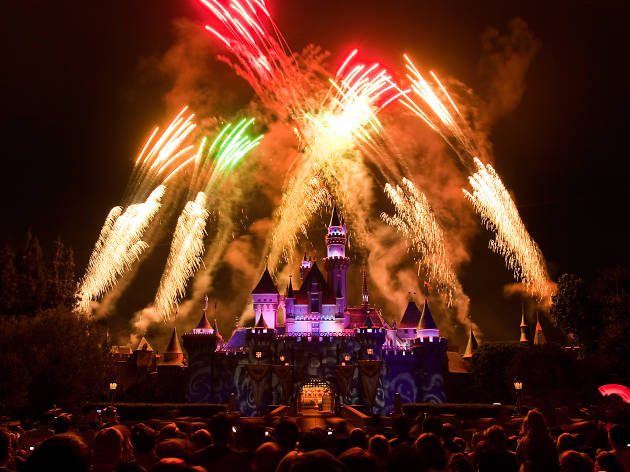 Trying to take photos of the fireworks? Turn your flash off and you won’t get bright heads and that humid haze across your photo.

For that matter, just leave your flash off, period, especially on rides: Pirates of the Caribbean looks considerably better without a bath of LED flash bulbs. But really, it’s just annoying for everyone else and your photos will look far better without the flash.

As for that frontside camera, leave the selfie stick at home—seriously, Disneyland has banned the devices—and take advantage of Disney’s PhotoPass photographers. These cameramen stationed throughout the park are technically there to sell you on Disney’s own freemium photo service, but if you hand them your iPhone they’ll happily take that group shot in front of Sleeping Beauty Castle.

Pro tip: As you leave attractions with an on-ride photo, don’t forget to snap your own shot of the screen. Alternatively, if you’ve shelled out for a MaxPass, complimentary photo downloads are included. 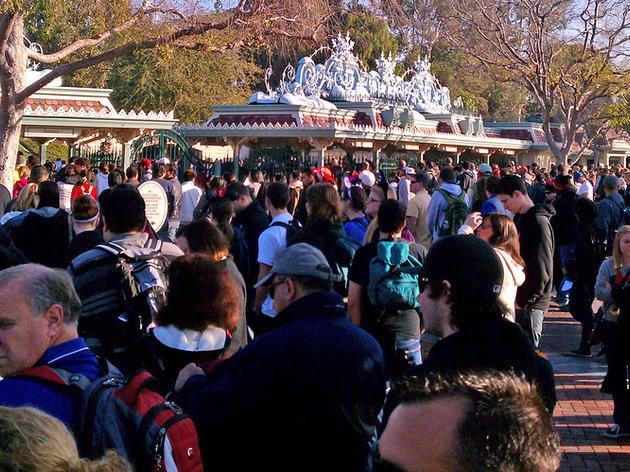 There’s a popular lore that’s been passed down about navigating Disney parks: Start at the left and work your way right because everyone does the opposite. It’s not bad advice, by any means, but we’d like to offer a corollary: Don’t follow the crowds. Much like that (slightly deceptive) Disney documentary about hordes of lemmings throwing themselves off cliffs, a swarm of sweaty tourists shouldn’t be a role model for crowd migration. If a queue splits into two lines and one’s significantly shorter, it’s not because the long-line-waiters know more than you.

When entering the park, look to the outermost turnstiles for the shortest lines—the same can be said for quick service food lines (most of which you can now skip with mobile ordering) and the parking garage pay stations. Speaking of parking, if there’s an overwhelming mob waiting for the tram back to the parking garage, walk right past it and toward the (hopefully) less crowded second loading area.

Pro tip: If you’re looking to travel to and from the Downtown Disney area, the monorail is a fun, retro shortcut that typically doesn’t have a huge wait. 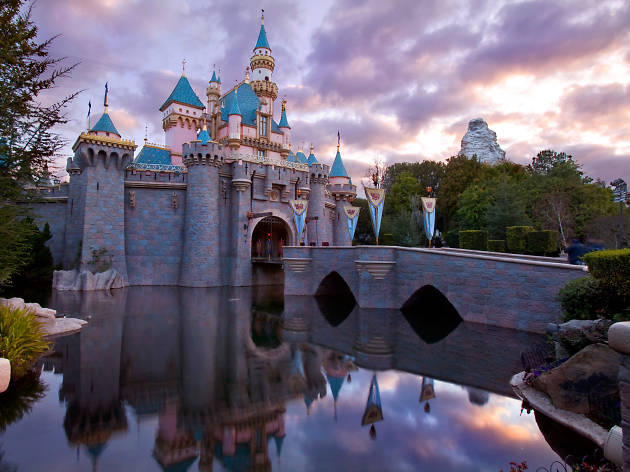 So you know what you want to do, but when is just as important. Here are a few helpful timing tips: 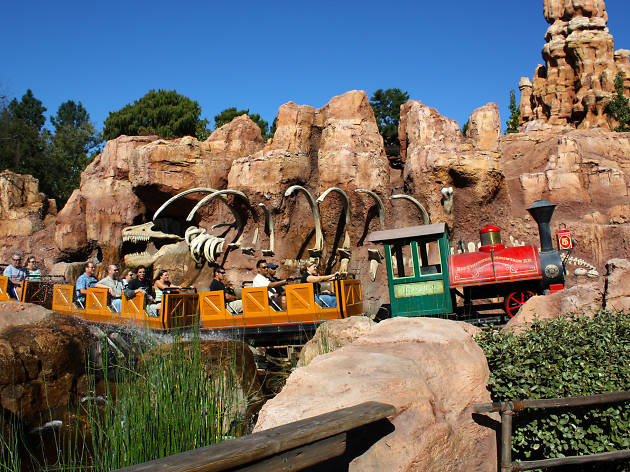 Consider this your to-do list for the next time you venture down to Anaheim.