Lose yourself to dance at the best clubs in Montreal, from intimate addresses to industrial warehouses spaces and beyond

This city has a long-established reputation as a nightclub destination, due in part to the best clubs in Montreal. Starting with Prohibition-era cabarets, ballrooms and the disco heyday of the 1970s—North America’s first discothèques were opened here, natch—Montreal is consistently been on the bleeding edge of all-night partying. Whether it’s small but mighty venues, warehouses, after-hours destinations or supper clubs, it’s one of the best things to do in Montreal where every night rivals that of the best festivals where the party never stops. We recommend starting your night out with pre-drinks in one of the best bars in the city, dancing the night away, and following it up with the best poutine right before the sun rises.

RECOMMENDED: Our complete guide to the best nightlife in Montreal

Where to find the best clubs in Montreal 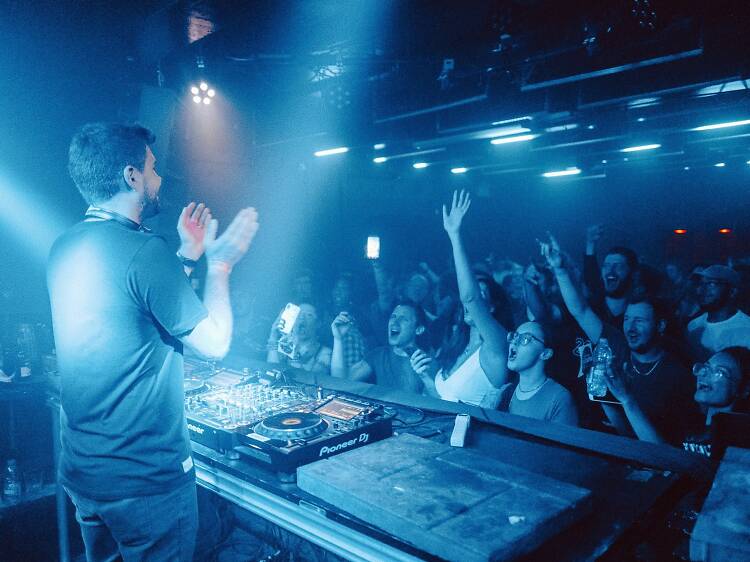 Montreal promoter I Love Neon operates this second-floor midsize venue in the Village, and they’ve made it their headquarters for all things techno with an especially good selection of minimal and deep house performers from Europe. Taking its name from the fictional language in Orwell’s 1984, it has an intimate format that gives partygoers remarkably close contact with international DJ talent on the dancefloor and allows the sound system to really fill the space—even when it’s packed to the rafters, this is one of the best places to see your favourite turntablists in town. Unlike more mainstream venues, the crowd here isn’t aggressive or cliquey, either. The friendly bar staff will make sure you’re taken care of and you’ll more than likely make friends in line for the bathroom. Keep an eye out for their Igloofest official afterparties and other special events. 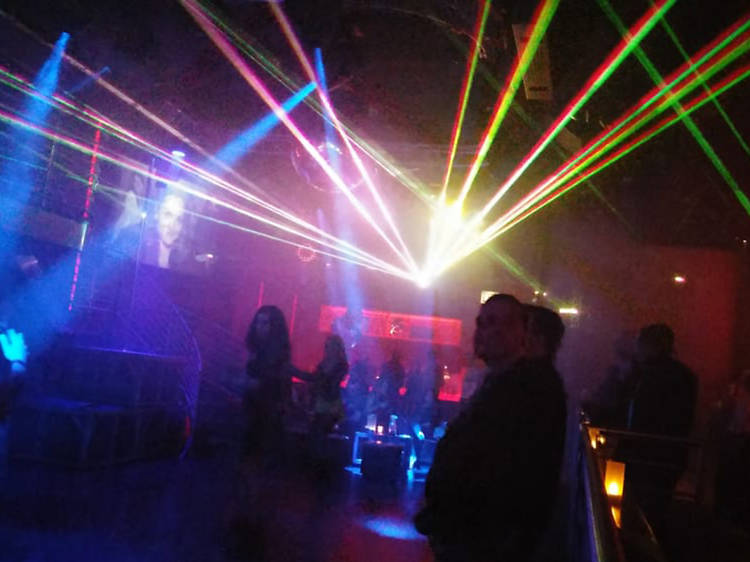 Stereo is the ultimate Montreal all-nighter experience, with an internationally recognized sound system and an equally impressive lineup of DJs from around the world. This warehouse club in the Village is definitely the best after-hours hours club in town with its commitment to only the best underground techno and deep house sounds. It’s open from 2 am until the early morning, but the party doesn’t really get started until 5 am on most nights. You may want to cancel your Sunday brunch plans and pre-drink at another bar or club before showing up here—downstairs venue Stereobar is a good option. 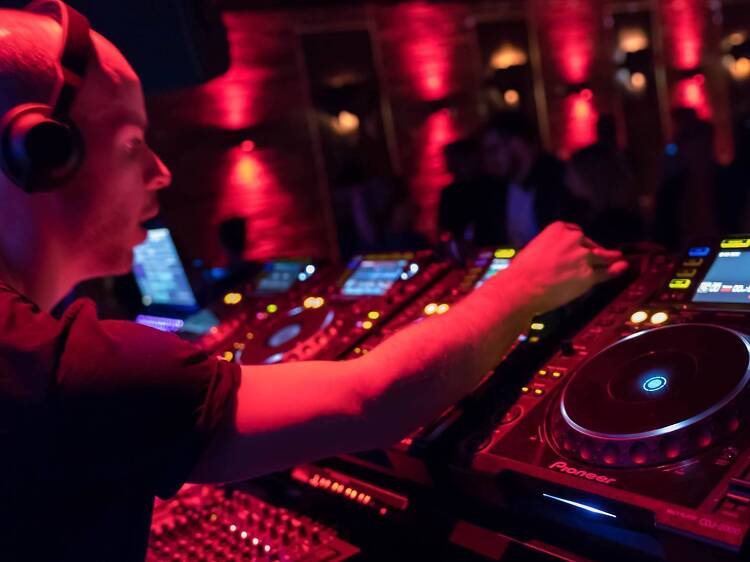 A generation of Montreal ravers and homegrown DJs cut their teeth at the original Salon Daomé on Mont-Royal Avenue. Since it recently moved to a large second-floor space around the corner on Saint-Laurent Boulevard, it kept the same neighbourhood feel and décor while upgrading the sound system and dancefloor. Open six days a week from Tuesday to Sunday, it’s an especially good choice for house and techno addicts looking for a place to dance until closing time on weekday nights. Cover and drinks are always reasonably priced, and the lounge area features comfy couches and ottomans when you need to take a breather. 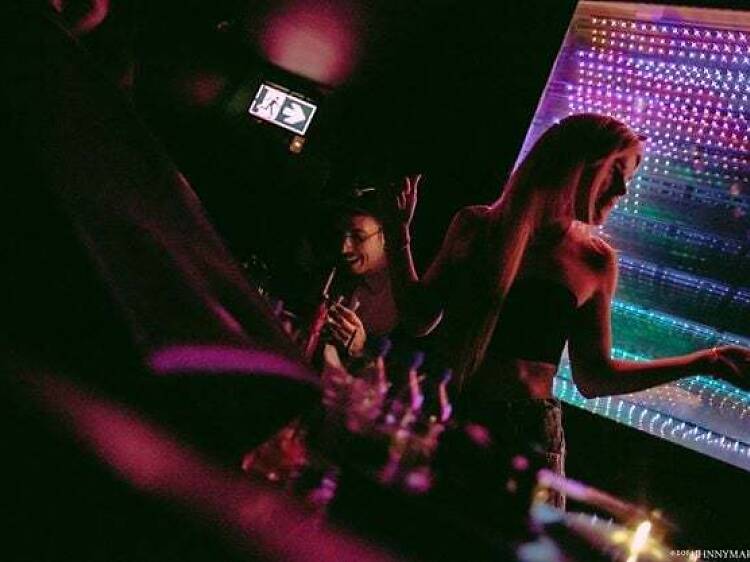 Founded in partnership with all-star Montreal DJ Thomas Von Party, this pocket club is a cornerstone of the local scene and among the best things to do in Mile End. Enjoy regular sets by Montreal underground favourites like RYAN Playground and Poirier as well as regular event series like No House No Techno!, 00:AM, L Nights, Émile Nelligan House Club and Homegrown Harvest. Keep an eye out for showcases from Von Party’s label Multi Culti and stop by the Imperial Russian-themed cocktail bar Kabinet next door if you’re looking for a place to pre-drink. 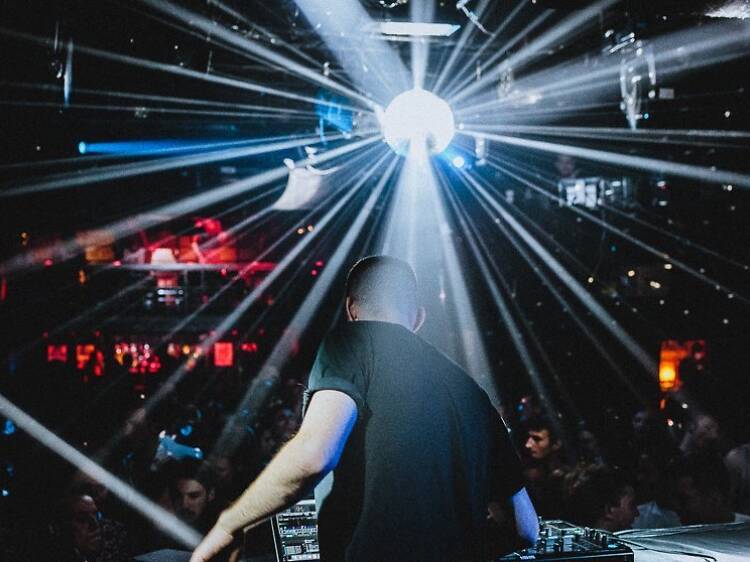 Le Belmont is one of the best LGBTQ hangouts in town with their monthly Mec Plus Ultra event featuring gay anthems, drag performances and electro-pop. Local funk collective Voyage Funktastique also do regular events here, as does Avalancha, a group dedicated to Spanish-language rock and DJs in town. The lineup is filled out by local and international touring groups playing hip-hop, indie and electro, while Bass Drive Wednesdays provides a weekly dose of bass-heavy music. The club has a large main room, as well as a smaller back room with lounge feel for bouts of relaxation.

Read more
Check it out 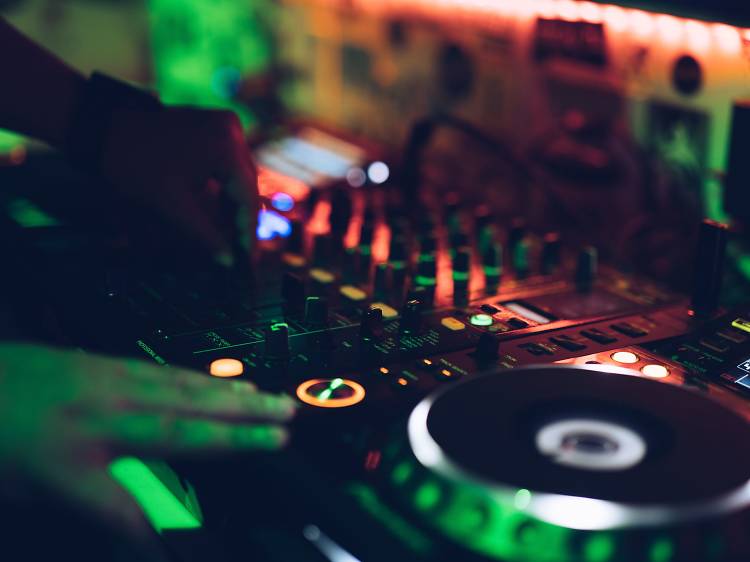 Stereo’s younger sibling lets you extend your afterhours all-nighter to an all-weekender. Located underneath the infamous Stereo after-hours club, this smaller and more intimate space has a regular licensed bar set up until 3 am with surprisingly affordable cover charges (given the big names they book on a regular basis). Just like its big brother upstairs, Stereobar specializes in the heavier techno, tech house and deep house styles, but you’ll find the music here a little more eclectic. 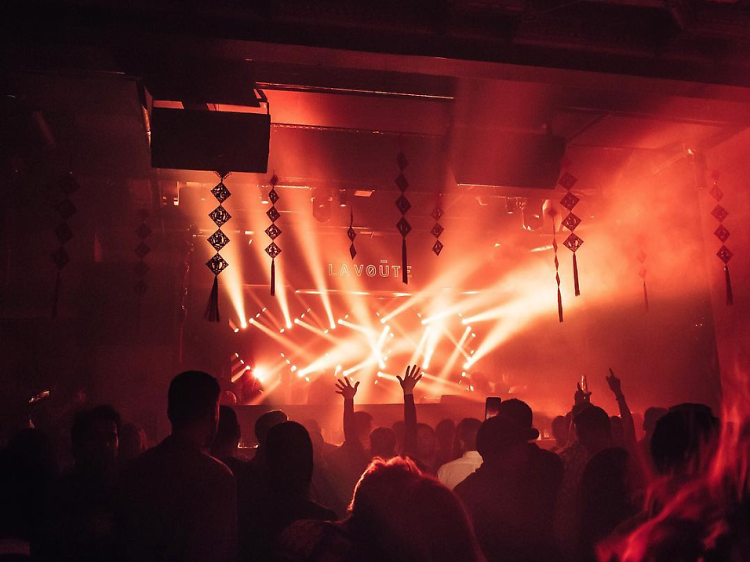 Located in the vault of the old Royal Bank of Canada headquarters in Old Montreal, La Voûte is definitely one of the more posh options in town. The architecture of the building and the club is inspired by Italian Renaissance palaces, so much so that you’ll want to dress up for this fashion-forward club. Music is a mix of commercial house and top 40s, supplemented by regular nights like Electric Dreams and the burlesque and drag-themed party Cabaret Nocturne. 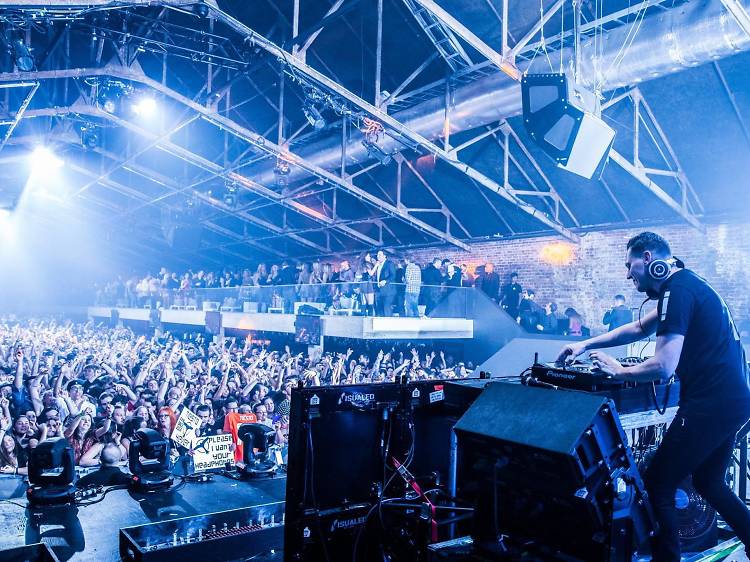 If Tiesto and other mainstream house and EDM DJs are in town, this is where they’ll be. New City Gas is located in a majestic piece of industrial heritage in Griffintown, in a public gaslight plant dating back to 1859. The result is a gigantic 40,000 square foot warehouse club that has consistently ranked among the best in Canada since it opened in 2012. 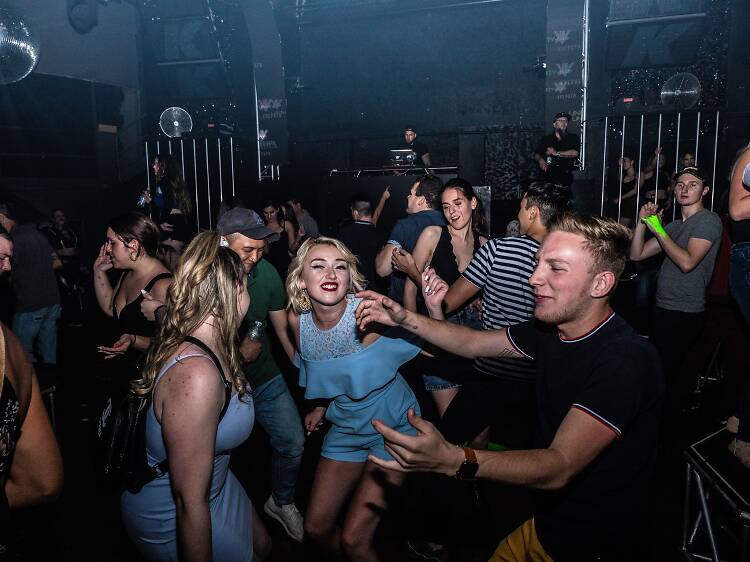 Club Unity is one of the most fun clubs in the Gay Village, sprawled over two floors and a magnificent rooftop terrasse with panoramic views of the city skyline. The large room plays more mainstream sounds with EDM, Top 40 and classics, while a smaller room features underground DJs playing techno and house. It’s a popular LGBTQ haunt, but everyone is welcome here and all are guaranteed a wild night of dancing and partying. 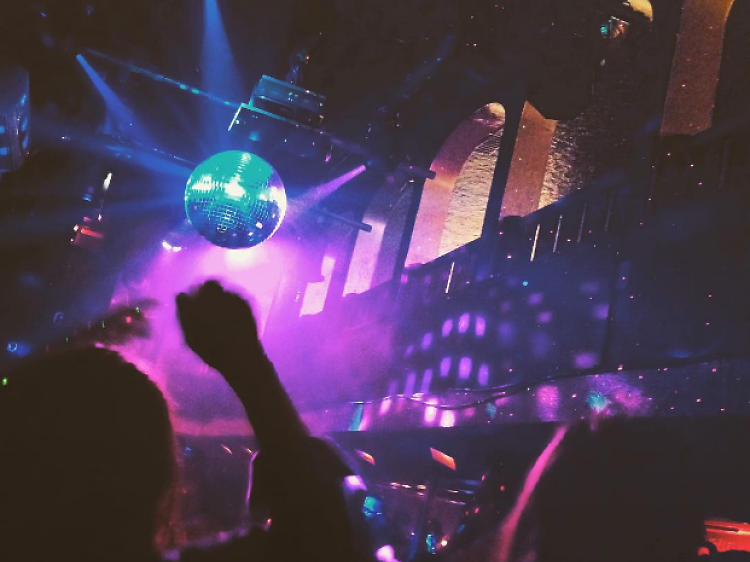 You don’t have to love electronic music to dance your heart out in Montreal. Those who prefer old school and vintage sounds will love this intimate second-floor club featuring rockabilly and classic rock from the 1950s to the 1980s. Providing the best choice for last call in the nightlife circuit known as l’Axe du Mal at the corner of St-Denis and Mont-Royal, drinks and cover are very cheap and it’s open six days a week from Monday to Saturday. Don’t miss their weekly event Deadly Mardis, a favourite among weeknight warriors—you can call in sick on Wednesday morning, right? 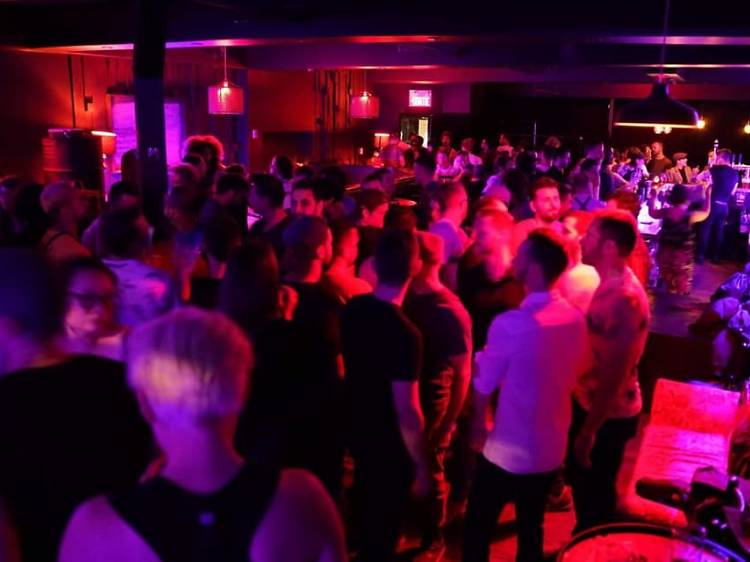 Cabaret Berlin is one of the latest and greatest small venues to open in the Gay Village. Inspired by the legendary underground clubs of Berlin, it has quickly shown its promise for wild nights and great local DJs. A mix of European-style minimal techno, queer goth, electroclash, dark wave, Italo disco and other genres means you’ll never have the same night twice, along with regular themed events that feature drag and burlesque. Entry is cheap and the ambiance is laid-back, making this one of the best places to let your inner freak out. 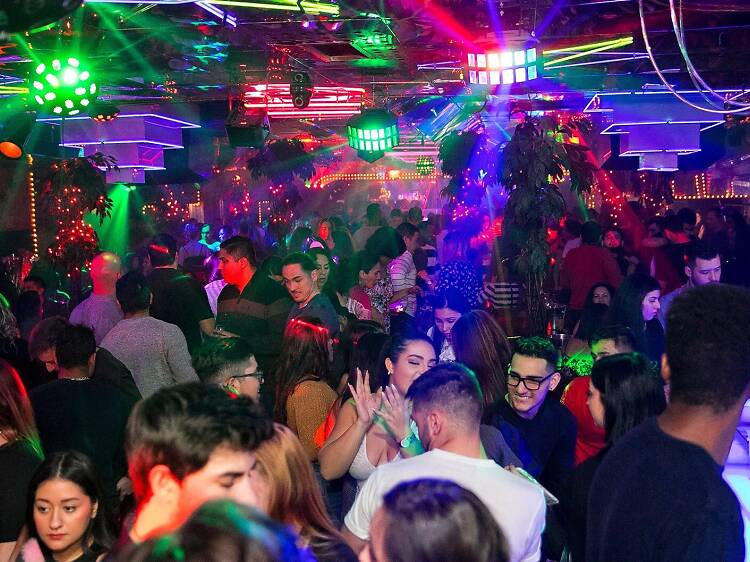 One of the oldest venues in town for salsa, merengue and bachata, this Downtown Montreal address has been open for nearly four decades. The décor is a tribute to Montreal’s bygone 1970s disco nights with neon lights and mirror balls that will make you feel like you’re on the set of Saturday Night Fever. The club only garnered greater fame in 2013 when Arcade Fire played a surprise live show during the launch of their album Reflektor. 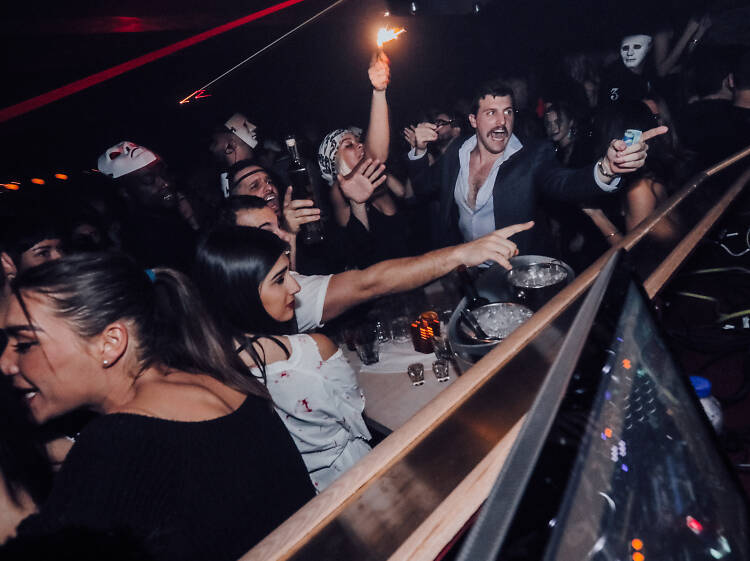 Supper clubs have always been a dominant feature in the more mainstream Montreal club culture, and Old Montreal’s Flyjin has been leading the pack for some years now. In the evening, it’s a fully functional izakaya with two dinner seatings of Japanese small plates accompanied while acting as one of the best cocktail bars in Montreal, while later on tables are pushed aside and it transforms into a packed dancefloor. Music includes EDM, commercial house and Top 40, but keep your eye out for international underground stars too.

Read more
Check it out 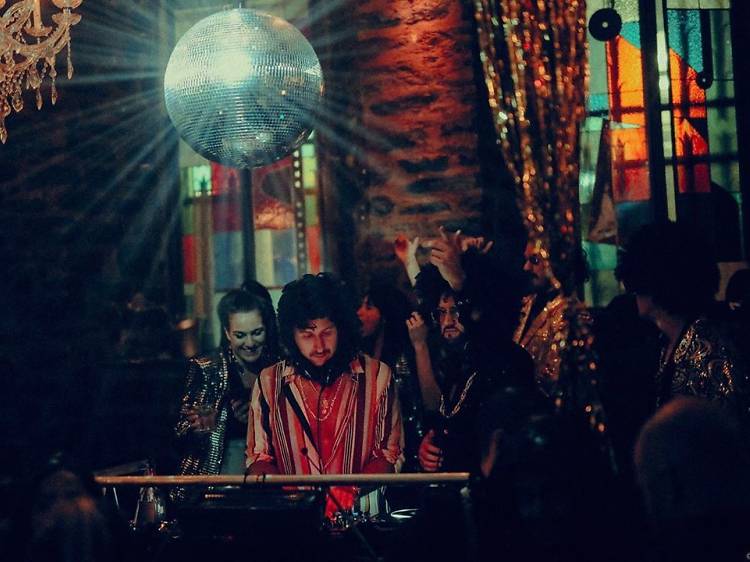 A club located in Old Montreal under the massive Auberge Saint-Gabriel restaurant has had a pioneering role in the craze surrounding the best speakeasies in Montreal that has taken over the local scene over the past decade. Reminiscent of European grotto clubs with its cobblestone tunnel ceiling, Velvet’s luxurious lounge couches are provided for VIP bottle service while the dancefloor is packed every weekend. Music here is house and techno-focused with a roster of local resident DJs and international talent. Some of the biggest Grand Prix parties in town happen here, along with Igloofest afterparties during the winter. 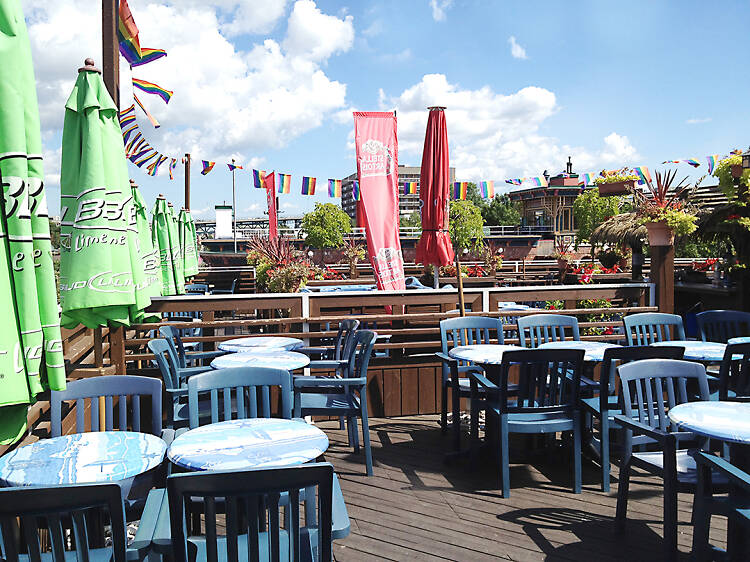 This huge three-floor nightlife complex in the Gay Village comes equipped with a restaurant, pub and terrasse on the ground floor, all of which are open seven days a week, while the Jersey Saloon, a hip hop room, a drag-focused cabaret and the Bleu Sky club each provide different experiences on the weekend on the upper floors. Cover is cheap and drinks are among the cheapest in town.

More of the best drinks and dancefloors in Montreal 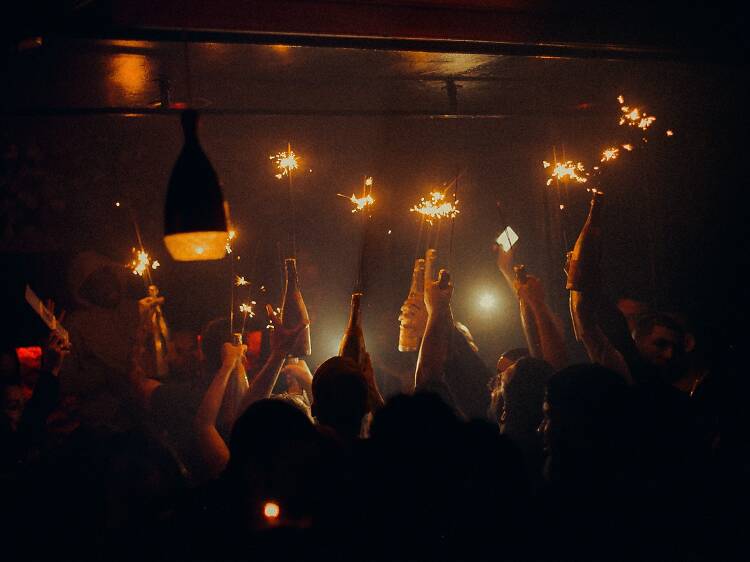 The ultimate guide to the best nightlife in Montreal right now

Discover swanky cocktail bars, famous clubs, sexy cabarets and more with our guide to the best nightlife in Montreal.