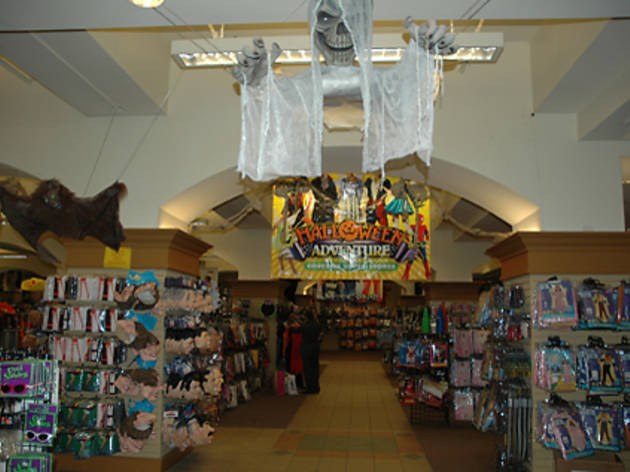 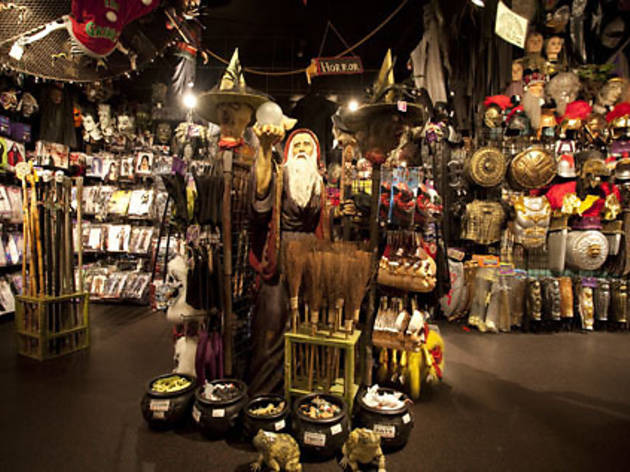 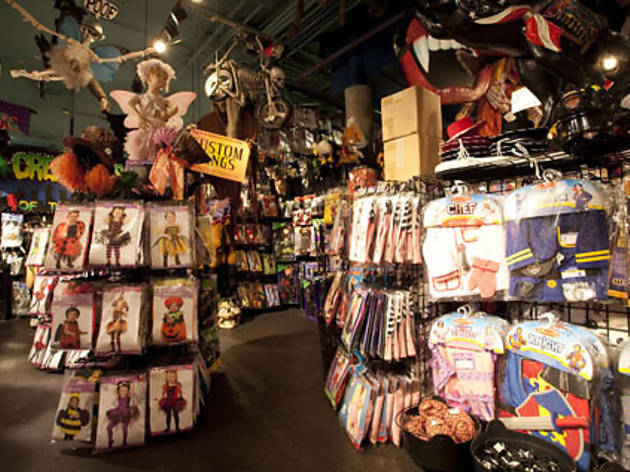 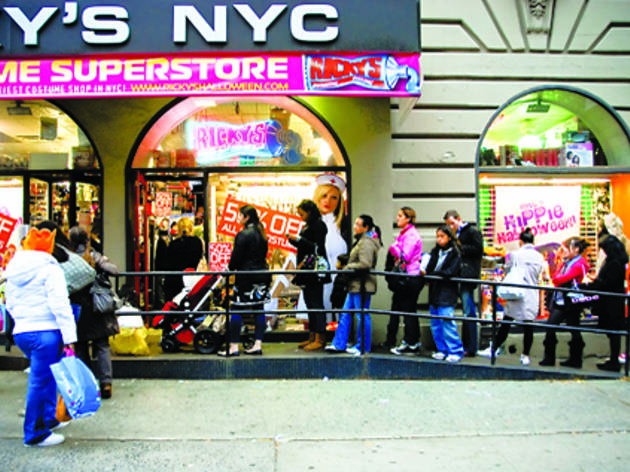 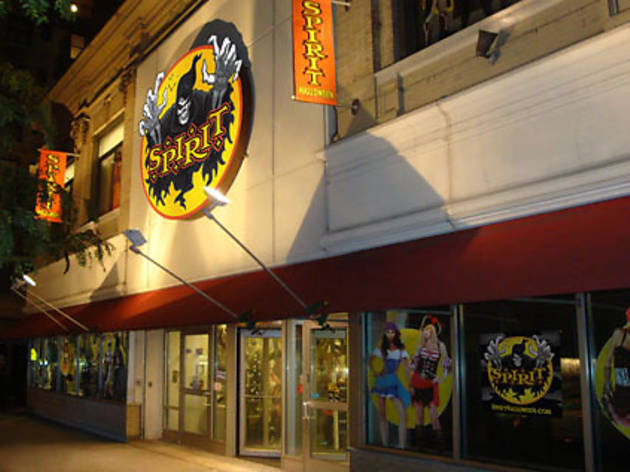 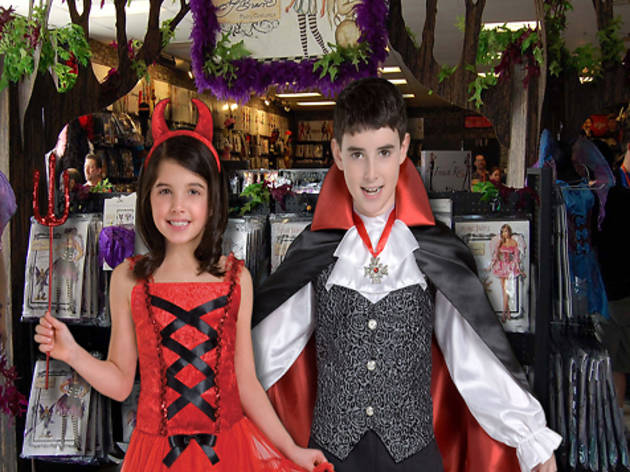 Whether open all year long or just for the Halloween season, these stores offer an array of costumes for the entire family.

Abracadabra Superstore
19 W 21st St between Fifth and Sixth Aves (212-627-7523,abracadabrasuperstore.com).
Like most Halloween shops in the city, Abracadabra prides itself on its unbeatable selection. Historically savvy kids can pick out a musketeer costume or medieval princess getup, in addition to the usual suspects ($35-$65 for most kids costumes).

Frank Bee Costume Center
3435 East Tremont Ave at Bruckner Blvd, Bronx (718-823-9792,frankbeecostume.com).
This family business, which promises the "largest selection in the universe," has been at the same Bronx location since 1957. Their huge stock includes every pop-culture personality you can think (Angry Birds), as well as characters from movies like Cars andThe Smurfs. Some of the most popular picks this year are Captain America and the Green Lantern.

Frankie Steinz
580 Broadway between E Houston and Prince Sts, suite 309 (212-925-1373,frankiesteinz.com).
Besides creating duds for movies and TV shows, Frankie Steinz offers a by-appointment service, making celeb-worthy getups for children (a little girl recently asked to be a dollhouse, complete with furniture). Custom orders must be placed by September (if you've missed this year's cutoff, keep Steinz in mind for next year). A selection of costumes—bowls of fruit, New York City skyscrapers—can be rented for $55 to $150.

New York Costumes/Halloween Adventure
104 Fourth Ave between 11th and 12th Sts (212-673-4546, newyorkcostumes.com).
Encompassing more than 15,000 square feet, this two-story megastore is open year-round and stocks guises for the entire family—even the family dog. Despite its large size, the lines to get in can wrap around the block as Halloween nears, so make sure to go early in the month.

Ricky's
Go to rickyshalloween.com for store locations.
With about 27 pop-up stores and 24 permanent shops around the city, convenience is Ricky's specialty. Yo Gabba Gabba!--loving toddlers can score mini DJ Lance Rock costumes; there's also a collection of Halloween costumes for first-time revelers—mini-pumpkins, butterflies and Cat in the Hat guises. Costumes from favorite flicks (Toy Story) and upcoming releases (Fonzie Bear and Kermit from November's The Muppets) are also up for grab. Consider covering your tyke's eyes as you walk past the adult costume section—each getup is raunchier than the last.

Rubie's Costume Company
120-08 Jamaica Avenue, Queens (718-846-1008, rubies.com).
The Queens headquarters of this international costume shop sports classic Halloween fare such as witches and zombies, as well as almost any Harry Potter character imaginable. Parents of toddlers have plenty to choose from as well: Infant options include a chili pepper and a frog prince. Kids' prices tend to fall in an affordable range of around $20-$40. Most costumes are kept behind the counter, but expect the long wait to pay off in personalized service.

Spirit Halloween
Go to spirithalloween.com for store locations.
This pop-up superstore sprouts a number of city locations come Halloween season. Browse the extensive baby, toddler and tween collection. Some of our favorites: a True Blood--esque Lil Bite Vampire set ($15, for babies) and the bad-ass X-Men Wolverine suit ($25, for toddlers).

These shops may not scream Halloween, but they've got a seasonal trick or two up their sleeves.

The Children's Place
Go to childrensplace.com for store locations.
The Halloween "boo-tique" at this chain store is full of adorable (and inexpensive) costumes for kids of all ages. Tiny tots can dress up as a ladybug or kitten, while grade-schoolers can turn into an astronaut or race car driver.

Flying Squirrel
96 North 6th St between Berry St and Wythe Ave, Williamsburg, Brooklyn (718-218-7775, flyingsquirrelbaby.com).
Score second-hand pieces (vintage items for mixing and matching) for as little as $9, or go big with wizard and superhero capes for $30.

If you have enough time, you can save a scary amount by ordering costumes online.

Amazon.com
This online superstore sells more than books and electronics—it has a grab bag of Halloween costumes and accessories. Unlike at the book marketplace, you can't buy used garb, but best-sellers like Wizard of Oz characters can be bought brand-new at significantly reduced prices.

Chasing-fireflies.com
If your child has ever dreamed of dressing up as a six-armed Indian goddess for Halloween, then she may be in luck. This site offers out-of-the-ordinary costumes, from great white yetis to medusas. Just don't expect bargain-basement deals.

Costumecauldron.com
The whole family—Fido included—is sure to find some sort of trick-or-treating garb on this tax-free site. Many of the kids' costumes—including new ones like an Alice in Wonderland ensemble—have been marked down to $35 or less.

Costumes4less.com
This site carries over tons of Disney-themed outfits, from Belle and Ariel to High School Musical's Gabriella and Sharpay. They'll also give you an extra 10 percent off your purchase if you find the identical costumes elsewhere for a lower price.

Disney.com
The company's Limited Edition Belle gown will wow young princesses, while boys are sure to go for the Woody and Buzz costumes. The site's "shop by character" feature makes it easy to find costumes.

Halloweenstreet.com
Kids' disguises range from a baby Thomas the Tank Engine to a slice of pizza. You can receive an additional 20 percent discount by purchasing a new costume through the website and donating it to the Memorial Sloan Kettering Cancer Center's pediatric department.

Justkidcostumes.com
This site's unique alternatives, like the Little Trees Car Freshener for infants or the kids' Hamburger Helper Hand, will guarantee that your tyke stands out in the neighborhood Halloween parade.

Kmart.com
All items in the Totally Ghoul collection are 20 percent off online. Choose to get them shipped to your apartment or to the nearest store.

PotteryBarnKids.com
Don't expect to find any of this year's blockbuster costumes—or budget price tags—on this store's website. But do look for sweet ideas like cupcake and donut outfits, and an old-fashioned simplicity that's the next-best-thing to homemade.

Target.com
It may not come as a surprise that this megastore has teamed up with a celebrity designer to churn out cheap-couture Halloween costumes. Barneys creative director Simon Doonan's punk-rock-inspired threads are adult-sized, but characters like Candace Corn and Devilish Demon would be suitable for older kids, too. They also have typical child fare—crayon, funky chicken and Yoda looks.

Walmart.com
Kids' costumes—from Darth Vader to SpongeBob—start at just $12, and the 97-cent shipping is no trick either. You can also opt for free site-to-store shipping but alas, Walmart has yet to open a New York City location.—Additional reporting by Lindsey Thomas