From its humble beginnings in Brooklyn and the Bronx during the 1970s—when kids still in high school started to scrawl their signature tags on buildings and subway art in cars with spray-paint and markers—street art has grown to become a world-wide phenomenon, garnering museum exposure and corporate sponsorship. But its mainstream acceptance hasn’t diminished its visual energy, or divorced it from its origins as an outlaw activity. Street art has also grown in complexity and sophistication through the decades, moving beyond a simple marking a place with a name to political themes and cultural commentary. To see how the form has evolved over time, check out our list of the best street artists ever—from old-school pioneers to today’s leading lights. 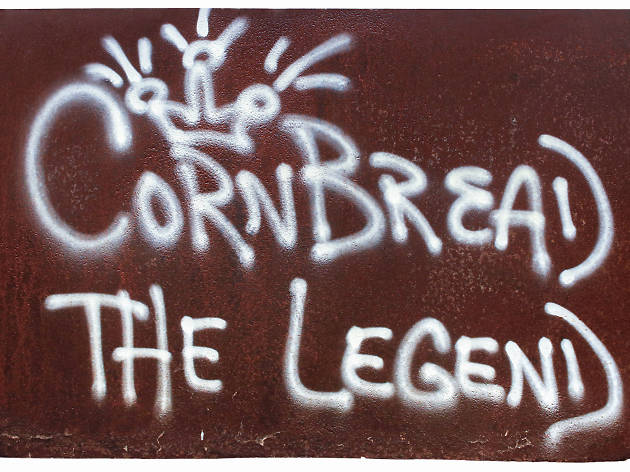 Born Darryl McCray, Cornbread is generally acknowledged to be the first modern graffiti artist, who got his start tagging in Philadelphia during the late 1960s. The practice spread to New York, where taggers where especially known for targeting subway cars, but in a least one instance, McCray topped his NYC rivals: At age 17, he jumped a fence at the Philadelphia Zoo and spray painted “Cornbread Lives” on the side of an elephant. 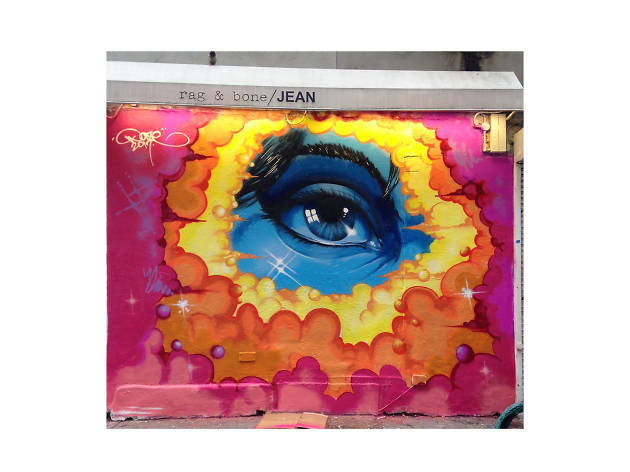 Chris “Daze” Ellis tried to spray-paint his first subway car in 1976 at age 14, but because it was the middle of winter, the paint in the can froze. His subsequent attempts met with greater success and along with partners like John “Crash” Matos, he went on to paint hundreds of subway cars through the rest of the decade. By the 1980s he began showing his work in NYC’s alternative gallery scene, which led to a career in the art world. These days, he sticks to commissioned murals, and to canvases that he shows in galleries and museums around the world. 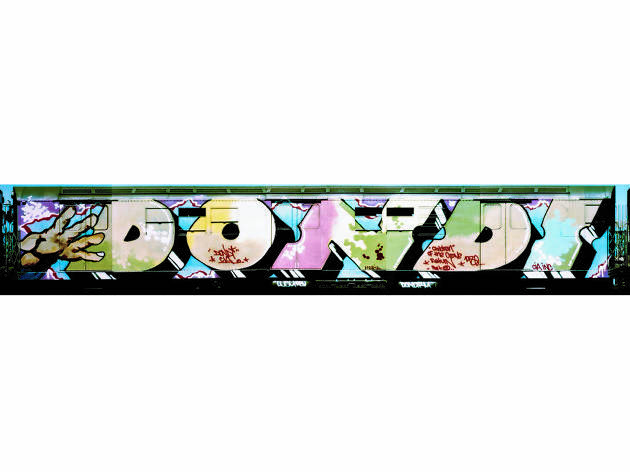 Coming out of the Brooklyn neighborhood of East New York, Donald Joseph “Dondi” White started tagging in the mid-1970s, developing a style of elaborate lettering mixed with pop-culture imagery. He was the first graffiti artist to show in Europe, where his work is in the collection of several museums. Though he died of AIDS in 1998, his work continues to inspire street artists today. 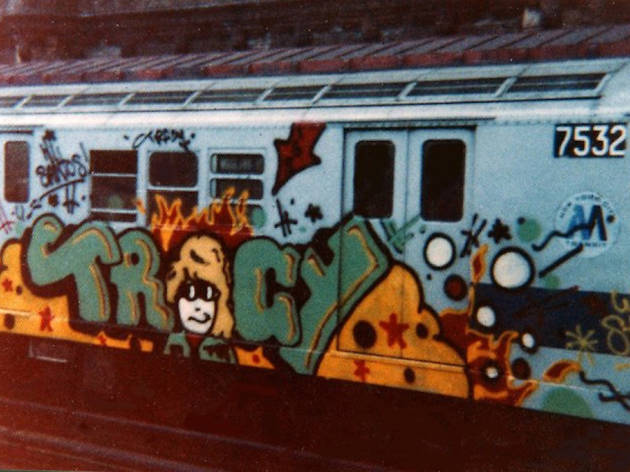 When most people picture classic graffiti, the form known as Wild Style usually comes to mind. The technique involves dense layers of lettering pulled and twisted into angles or curves that are often embellished with arrows or other elements. The result has a baroque, spikey appearance, and is one of the most widely used types of graffiti to this day. Who was the artist who came up with it? Tracy 168, neé Michael Tracy. Tracy 168 became one to the most influential street artists of all time, as variations of Wild Style writing spread around the world. The first hip-hop motion picture, 1983’s Wild Style, took its title from Tracy’s creation, though, oddly, the artist himself didn’t appear in it. (He was, however, featured in the documentary film Just to Get a Rep from 2004). A mentor to many other street artists, including Keith Haring and SAMO, Tracy has had his work shown at the Brooklyn Museum, among other major institutions. 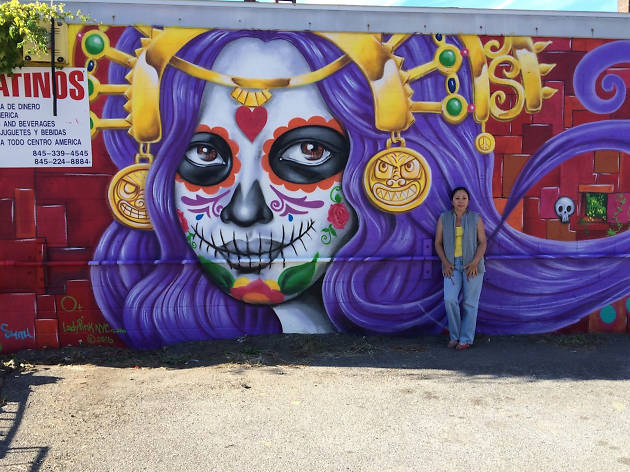 One of the few women among the original graffiti artists of the 1970s and’80s, Lady Pink was born Sandra Fabara in Ecuador and raised in NYC, where she painted subway trains between 1979 and 1985. She starred in the hip-hop movie Wild Style in 1983, and, in 1985, moved into exhibiting in galleries and collaborating with art-world figures like Jenny Holzer. Her works, know for their strong feminist/latina edge, resides in the collection of such major institutions as Whitney Museum, The Metropolitan Museum New York City, the Brooklyn Museum and the Groningen Museum in the Netherlands. 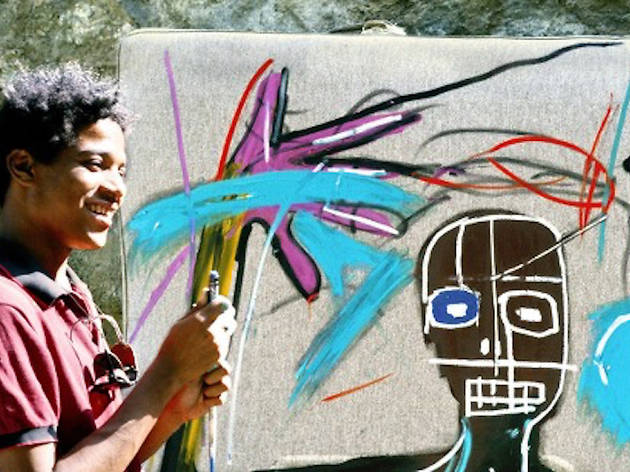 Among the most famous contemporary artists of all time, Jean-Michel Basquiat (who was so hot in the art world of the 1980s, that Warhol felt compelled to horn in on his act with a proposal for a collaborative project) actually started out in 1976 as a graffiti artist. Part of a duo operating under the tag SAMO, Basquiat stuck mainly to writing enigmatic, epigrammatic messages on walls in Lower Manhattan. In 1980 at age 20, he turned to studio painting, beginning a meteoric rise to art stardom. Born in Brooklyn to a Haitian father and Puerto Rican mother, Basquiat died in 1988 of a heroin overdose, but his reputation lives on: In 2017, one of his canvases fetched $110,487,500—the most ever for a work by an American artist—surpassing the previous record-holder, Andy Warhol. 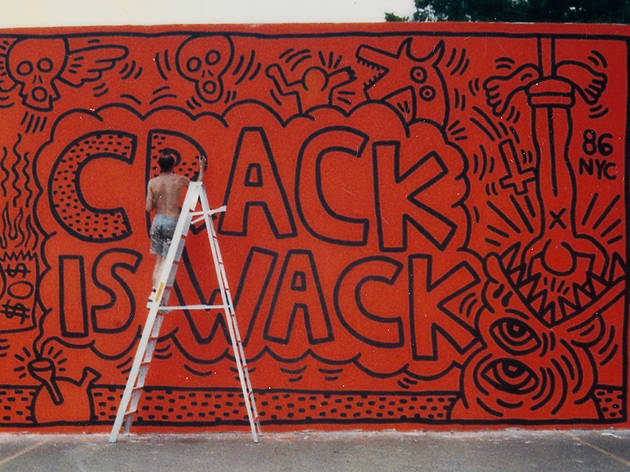 Another art superstar who started in the streets, Keith Haring was born in Reading, PA, but grew up in nearby Kuntztown. His father was an engineer and an amateur cartoonist, which likely inspired Haring’s career. Unlike most graffiti artists, Haring went to art school, moving to New York to study at the School of Visual Arts (SVA). Shortly thereafter, he started working in the subways. He began drawing in chalk inside the spaces reserved for ads in the stations; when empty, these areas were covered with sheets of black paper, which essentially became Haring’s canvases as he began to work out the pop iconography—radiant babies, dancing figures, flying saucers—that brought him fame. He died of AIDS in 1990 at 31. 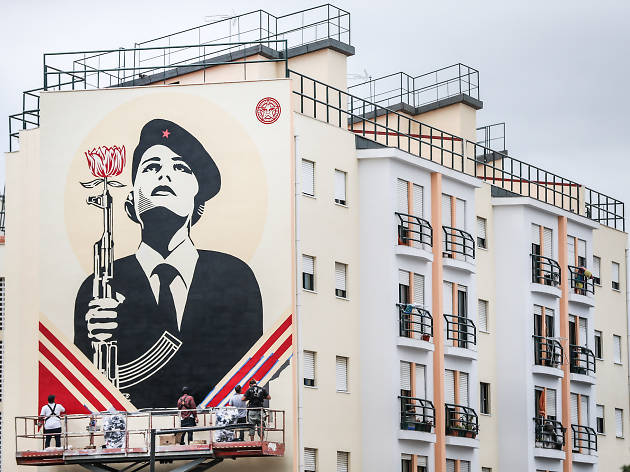 In 1989, a skateboarding enthusiast and Rhode Island School of Design student named Shepard Fairey started to post stickers featuring the face of the famed professional wrestler, André the Giant around NYC. “André the Giant Has a Posse,” it read, much to the bewilderment of passersby who saw it on the streets and in the subway. The message was soon simplified to “Obey Giant,” which found its way onto t-shirts and posters. Thus began the career of one of most famous and successful street artists in the world. Fairey has since created something of a street art empire, with a fashion line and major commissions for murals in the United States and abroad. Known for eye-grabbing imagery and typography, Fairey’s work is often political in nature, delivering his antiwar, pro-environment and pro-human rights agenda in a style that deliberately evokes propaganda—as in his most enduring claim to fame, the Barack Obama “Hope” poster Fairey created during the 2008 Presidential campaign. 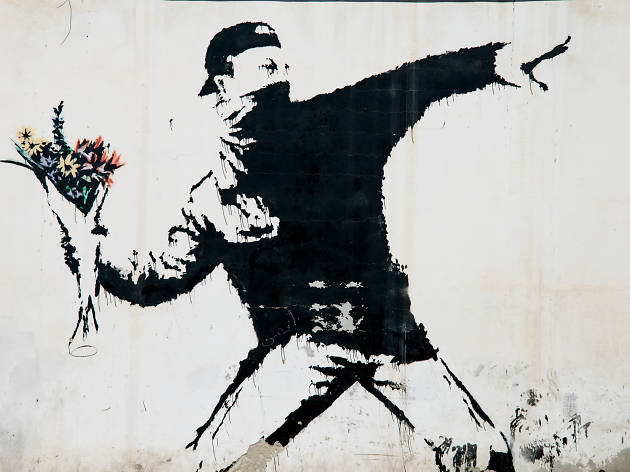 Though Shepard Fairey is world-famous, Banksy is arguably more so, which is remarkable given that he works anonymously (though his real name is rumored to be Robin Gunningham). The British artist, political activist and filmmaker emerged in Bristol as part of a underground art and music scene during the early- to mid-1990s. Toward the end of the decade, he began to spray paint stenciled images that mixed pop-cultural references and subversive political themes on walls and bridges around Bristol and London (he has since gone world-wide). In 2010, he directed the film, Exit Through the Gift Shop, the story of a French emigré obsessed with street art; in 2015, he opened an amusement-park/installation piece called Dismaland, which closed after a month. Needless to say, Banksy’s notoriety has served him well on the art market, where his work has sold in the high six-figures. This in turn has generated collector interest in other street artist—a phenomenon that has come to be known as the “Banksy effect.” 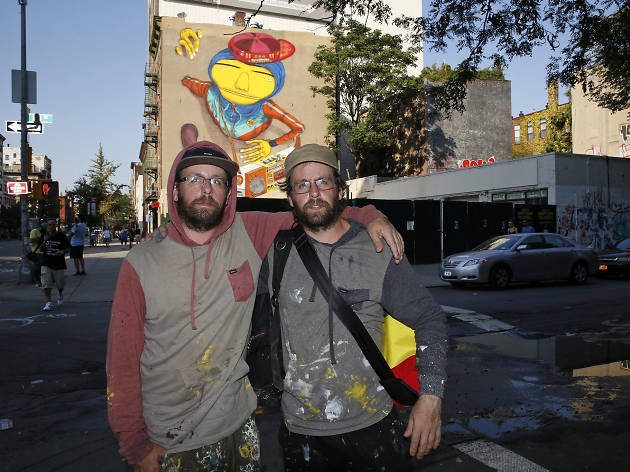 Os Gemeos, Portugese for “the twins,” is the name of brothers Brothers Gustavo and Otavio Pandolfo—who are, yes, identical twins. The Pandolfos, who hail from São Paulo, Brazil, started out break dancing in the São Paulo hip-hop scene before gravitating towards street art in the late 1980s. Their murals feature bold, cartoonish figures with yellowish faces (inspired, apparently, from the yellow tint that colors both brothers’ dreams. Os Gemeos also has a significant studio practice where they create paintings, sculptures and installations specifically for gallery exhibitions, though they make no distinctions between street or gallery art. 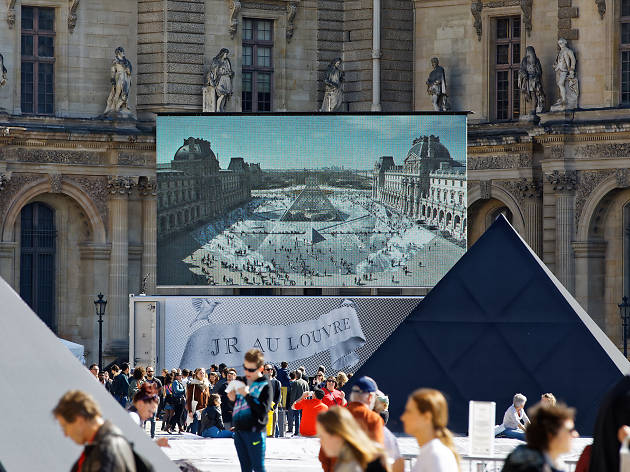 Starting out as a teenage tagger in Paris 20 years ago, the pseudonymous French artist JR has gone on to achieve global acclaim, winning the TED Prize in 2011 and appearing on 60 Minutes and the cover of the New York Times Magazine. His brand of socially conscious street art consists of posting mural-size photographic images on walls—sometimes with permission, sometimes without—around the world. His most notable efforts include putting portraits of Israelis and Palestinians on opposite sides of the Separation Barrier dividing Jewish settlements in the Occupied Territories from their Palestinian neighbors and printing self-portraits of thousands of people from around the world to post in their local communities. 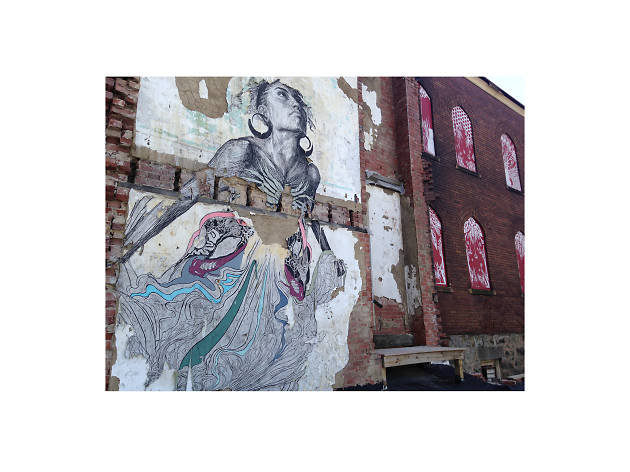 Swoon (neé Callie Curry) has exhibited her work in museums and galleries, but she is best known for large, intricately cut and pasted paper murals made from recycled newsprint which she began to create in 1999. Citing influences from German Expressionism to Indonesia shadow puppets, Swoon often depicts friends and family and prefers abandoned buildings, bridges, fire escapes, water towers and street signs as places to site her work. 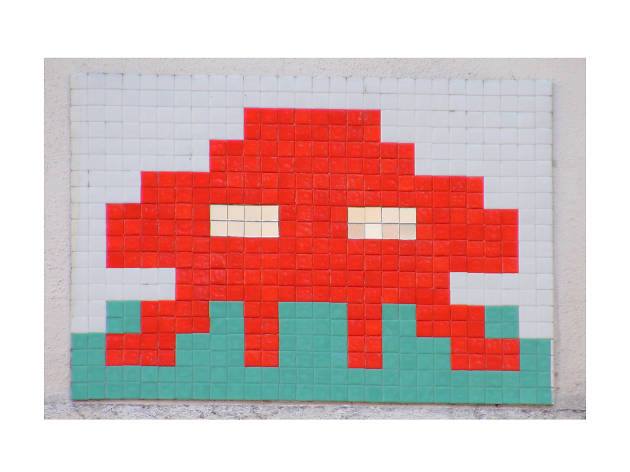 Although street art is usually associated with spray paint, the French artist working under the pseudonym Invader uses a very different material: Ceramic tile. Inspired by the video games he played as a youngster during the 1970s and ’80s, Invader creates mosaic images out of tiles to recall the eight-bit pixels of early computer graphics—most especially, his signature motif: The Pac-Man-like alien featured in the video game classic, Space Invaders (from which the artist also takes his name). Although Invader works incognito, it's known that his real name is Franck Slama and that he attended the École des Beaux-Arts in Paris. The French capital is also where he first began to mount his mosaics on the sides of building in the 1990s. Since then, he's taken his “invasions,” as he calls his street art forays, worldwide to cities such as Hong Kong, Los Angeles, Manchester, Bilbao and New York, where he created a six-foot-tall image of Joey Ramone in 2015. Invader has also created QR code mosaics out of black-and-like tiles that can be decoded with a smartphone app, (one such message read, “This is an invasion”). In addition to street art, Invader creates two- and three-dimensional works out of Rubik's Cubes in a style he calls Rubikcubism. 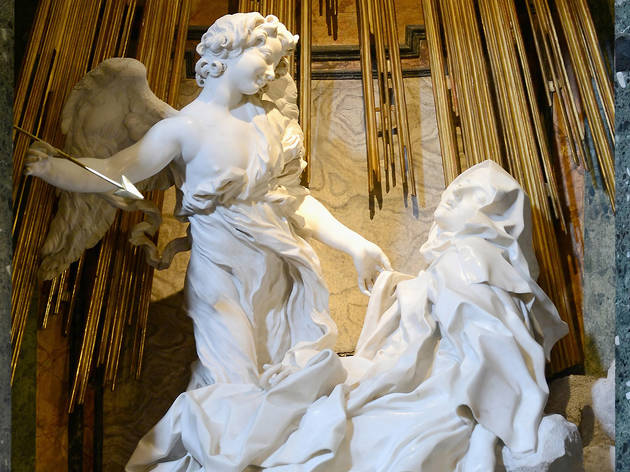 From pre-history and the Renaissance to 20th-century Modernism and the present, we rank the top sculptures of all time