Drag queens and bathrooms are central to many queer New Yorkers' nightlife experiences, so for Gay Pride month and Queen Elizabeth II's Diamond Jubilee, it almost made too much sense to pose some of our favorite drag queens in some of the city's quirkiest bathrooms. Almost, but not quite. So please enjoy these shots of Sharon Needles, Jiggly Caliente, Paige Turner, Linda Simpson, Sherry Vine and Peppermint in repose on the can. Plus: Find out where you can see these queens during Gay Pride season, hear their craziest bathroom tales (watching Debbie Harry pee in the hall!), and check out their advice for that other Queen as she enters the next phase of her reign (hint: less hats, more glamour). 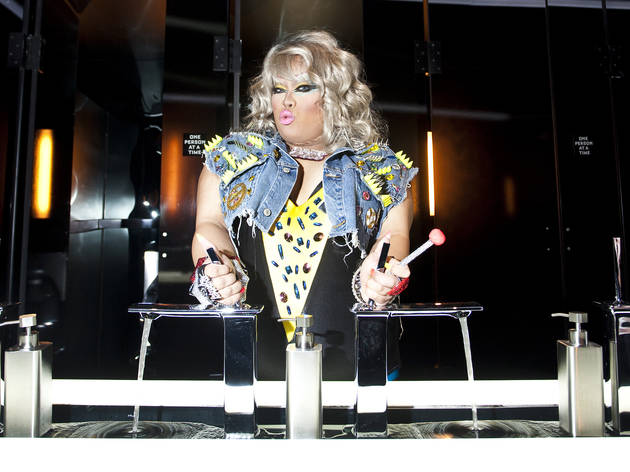 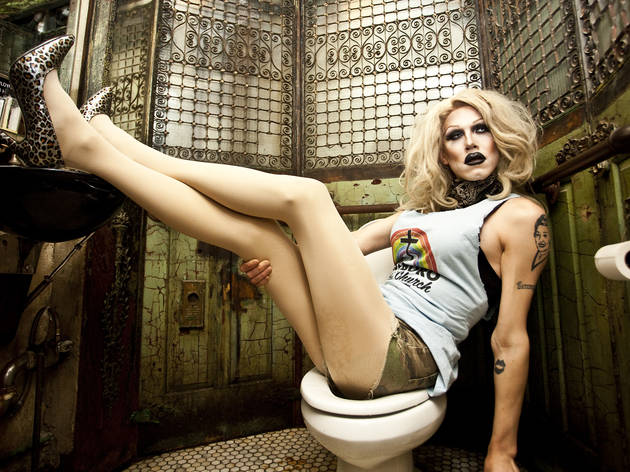 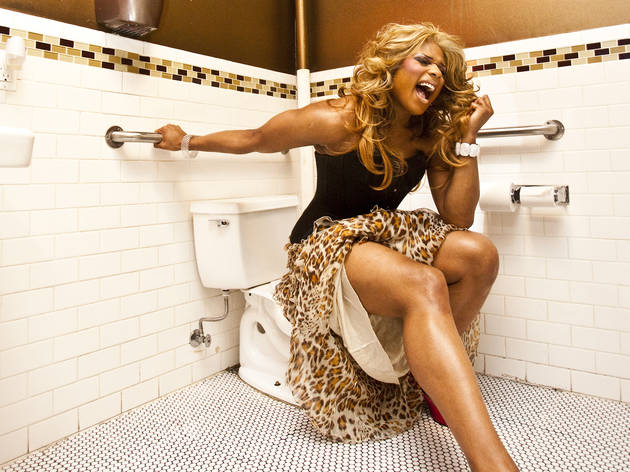 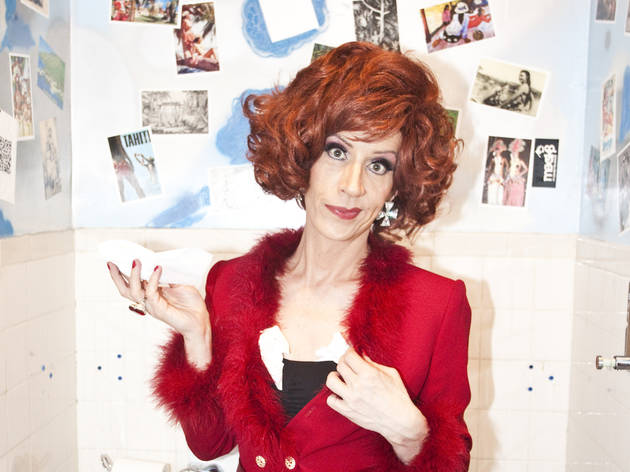 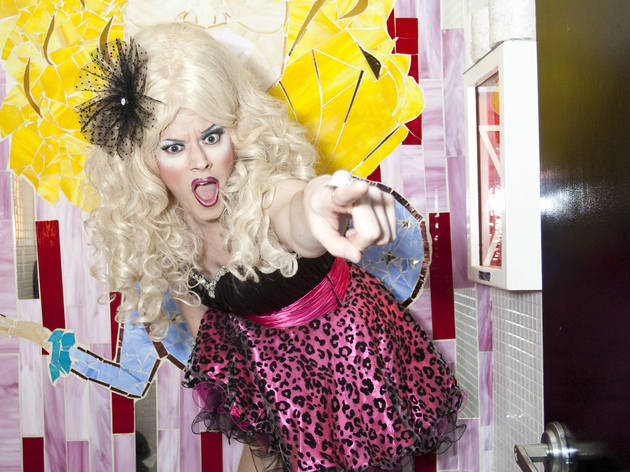 The “showbiz spitfire” visits the commode at Vinyl. 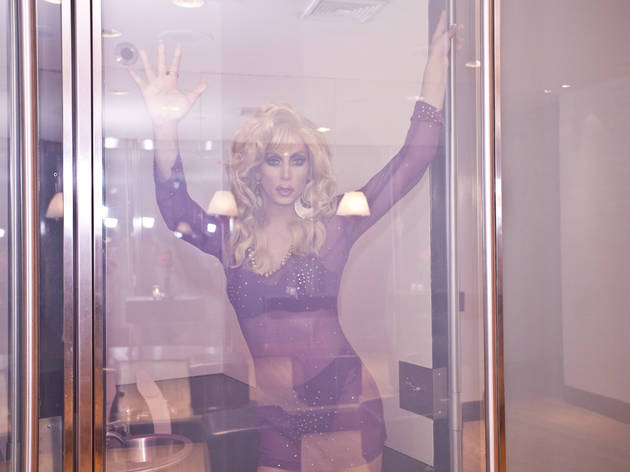 A downtown veteran gets playful in Bar 89's notorious stalls. 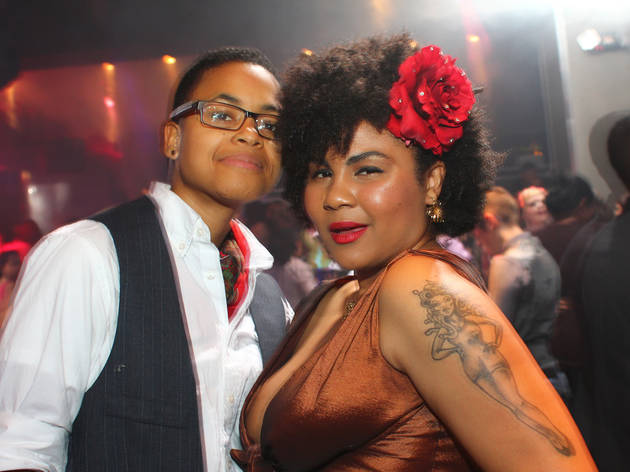 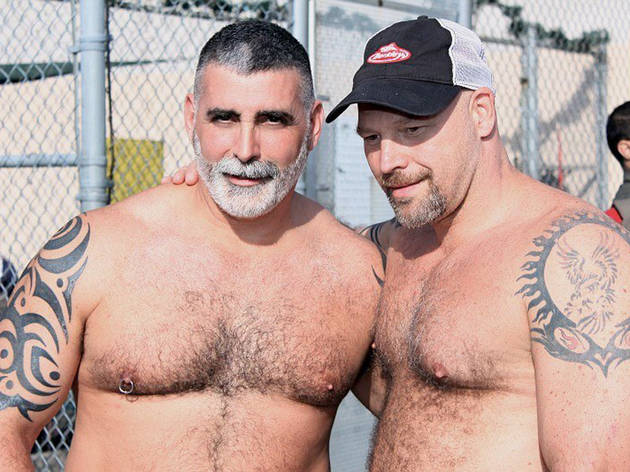 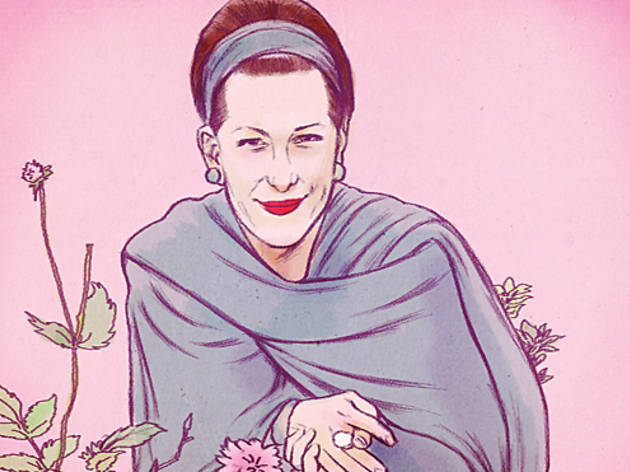 The downtown legend opens up in a new childhood memoir. You recently released your debut solo album, Dendrophile, and your book Tango is out this month. Were you surprised by how busy this summer turned out to be?It just kind of happened that way. Up until June, I was living in a loft above Mars Bar in a building that is now being demolished. But for the two-and-a-half years that I lived there, I had a lot of space, and my rent was really low. I organized my time so that I was very prolific. Why did you decide to write about your childhood?I'd had [a conversation] with my sister about this boy who'd been my lover. He was arrested for impersonating a DEA agent, and I realized he had all these problems. Also, I had just been diagnosed with ADD, so I was in the process of looking back at my childhood anyway. The book has a lot of poignant moments, but it's also very funny. Was it difficult to strike that balance?I guess that the things that happened were serious. I don't take things too seriously. I prefer to laugh than to cry. Usually. [Laughs] In the book, you talk about using humor to get your anger out as a kid. Is that something you still do?I do, to an extent. Part of [my reason for writing the book] was to let go of some resentment I had from [childhood]. It was kind of cathartic for me; I'm certainly a little bit less angry than I was two years ago. Earlier this year, you wrote a blog post about identifying as trans and adopting the pronoun V and title Mx. to describe yourself. Why did you decide to make that change?My record and my book were about to be released, and I'd been on an inward journey. I knew I was going to be doing publicity, so I naively put that blog up in order to simplify things for interviews. I was giving people a glossary of terms that would make their lives simpler. Evidently it's not that simple for some people. Would you encourage other people who identify as trans to use them too?I certainly don't want to put words in anybody's mouth. It seems that a lot of people like the prefix Mx., so I think that's fun that so many people are into that. I said what I wanted for myself, and anyone who wants to use those words is more than welcome to. I'm delighted that there's a larger conversation going on about that, and about trying to find the right terms. I think the binary words that we're used to using aren't really serving us anymore. There was some controversy after New York profiled you earlier this year and you posted about being offended by the piece on your blog. The response got picked up, and people were very supportive of what you were saying. Did you expect that?I was so gratified, because a lot of people reacted to that piece in the same way I did before I published my blog. It was a high-profile piece on me, and many people who I wouldn't say are ignorant, but who aren't that thoughtful and experienced, thought that the piece was just wonderful because they see a great, big photograph of you in New York magazine, and no one is saying that you are an asshole. They think, Fantastic, how great, how wonderful. And in that regard, it's true and I was grateful for the piece. But I felt an obligation to my community and to the people that [Carl Swanson, who wrote the piece] was comparing me to. It's not like I'm going to be a spokesmodel, but I felt the need to be responsible [and address] things that were really inaccurate and sensationalistic. Especially the hierarchies of transness that he felt that had some sort of keen observation on. I felt just terrible when I read that, thinking that people would be insulted. So I felt that I had to respond. You said you aren't putting yourself out there as a spokesperson. Do you see that possibly happening anyway, since you are very visible and open to talking about being trans and the issues surrounding it?Well, I don't mind being a catalyst and someone to stimulate conversation, that's for sure. But I certainly would never think of myself as a role model, although I am in a position where I tend to think about these things, and sometimes I feel obligated to share my thoughts. I don't want to be a role model, but I am definitely here to talk. When you were interviewed in 2008 for our New York 40 issue, you mentioned that NYC nightlife never recovered from Giuliani's policing—do you still feel that way?I think now it has more to do with the conservatism of the generation that goes to these places. In the old days, when people didn't have their phones—so they weren't documenting every moment—the behavior in nightclubs [was] a lot more illicit and dangerous, in the best sense of the word. People are still going out, but I don't think it's recovered to the point where it was before, because it's just not as much fun. And people get their sex off the Internet now. Tango (The Feminist Press, $16.95) is out now. Bond appears at Dixon Place on Thu 8 and Symphony Space on Wed 14. See more Hot seat 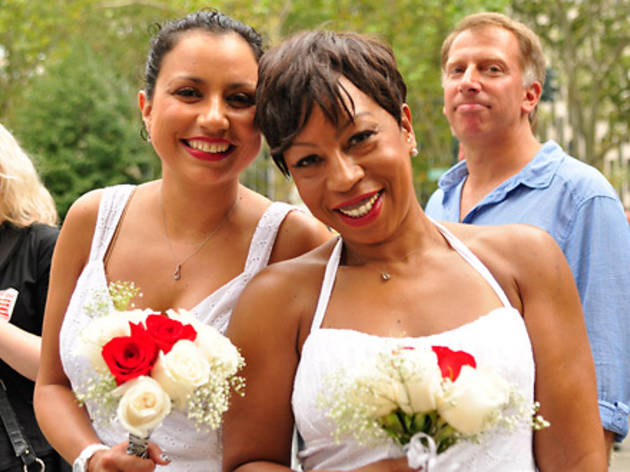 It was an extremely good year to be gay in New York. @TimeOutNYGay See more in Gay & Lesbian.