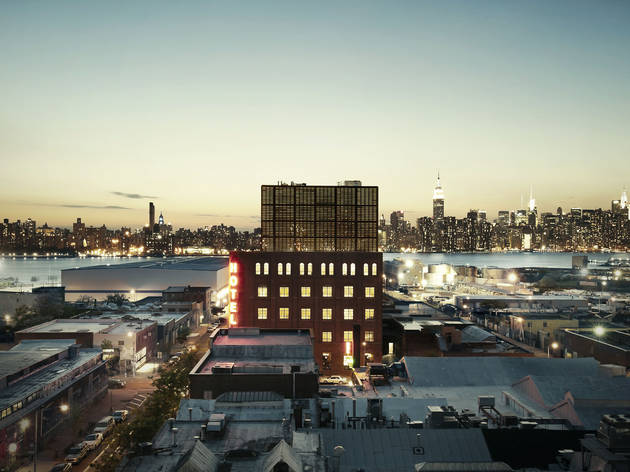 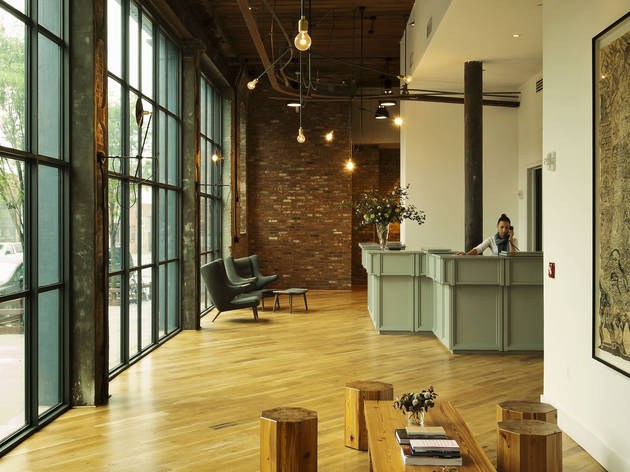 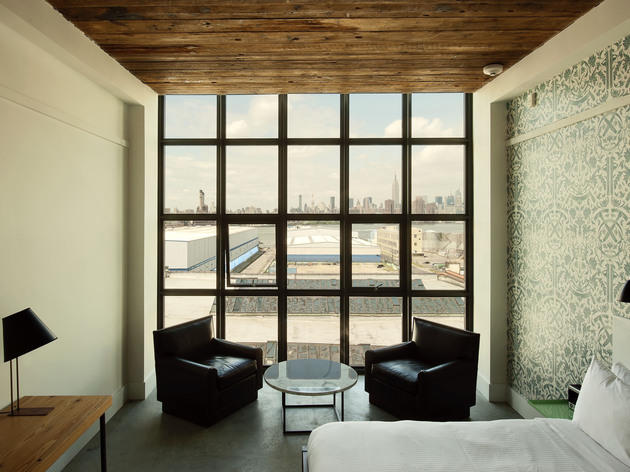 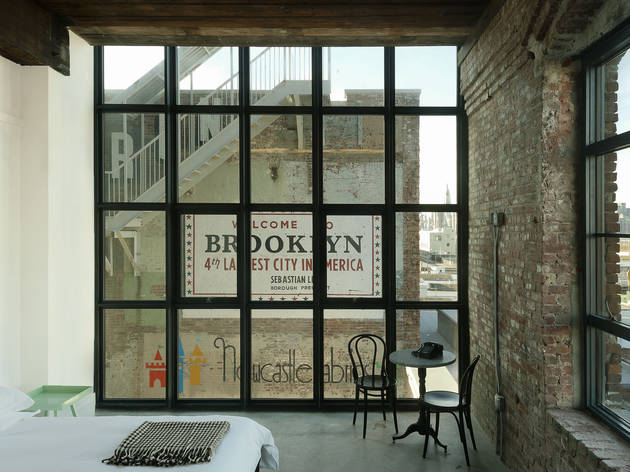 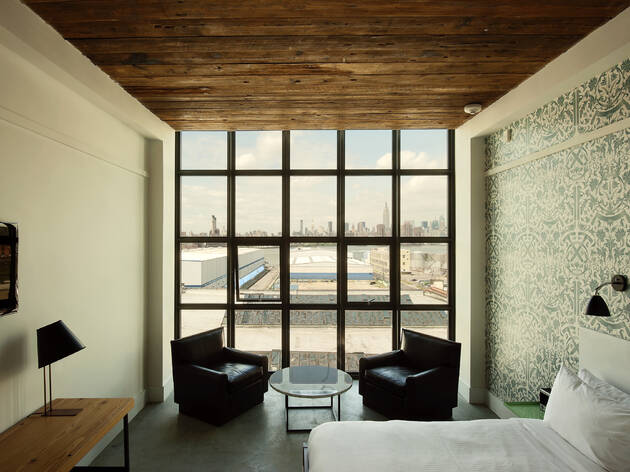 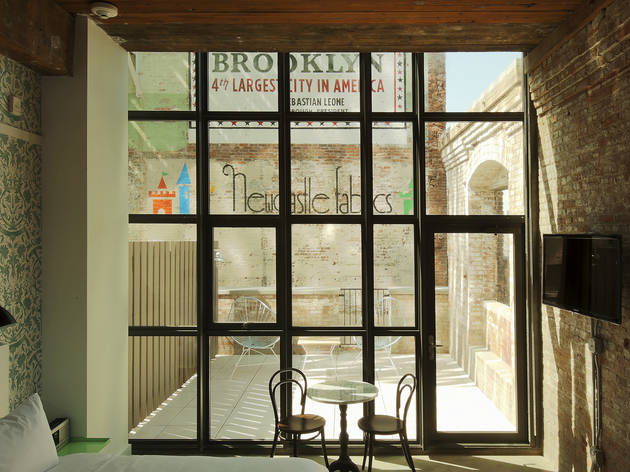 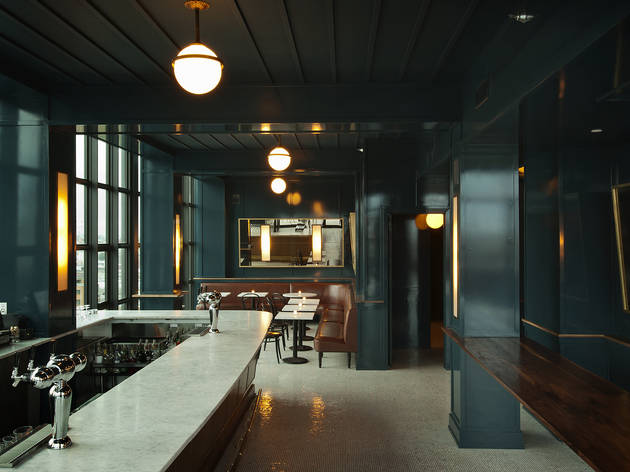 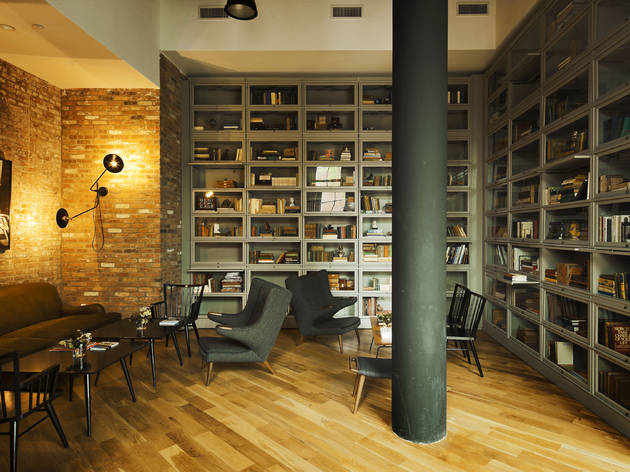 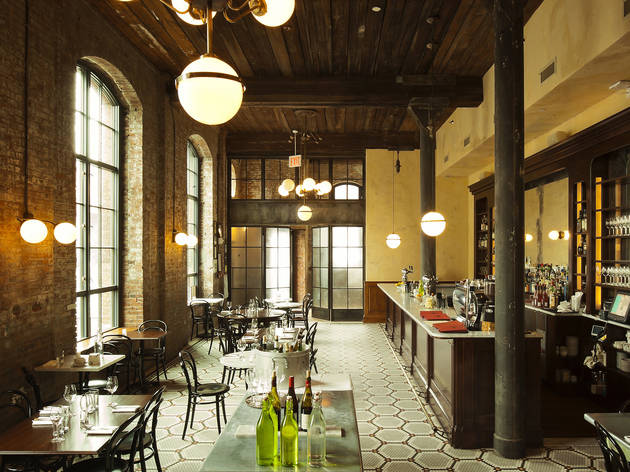 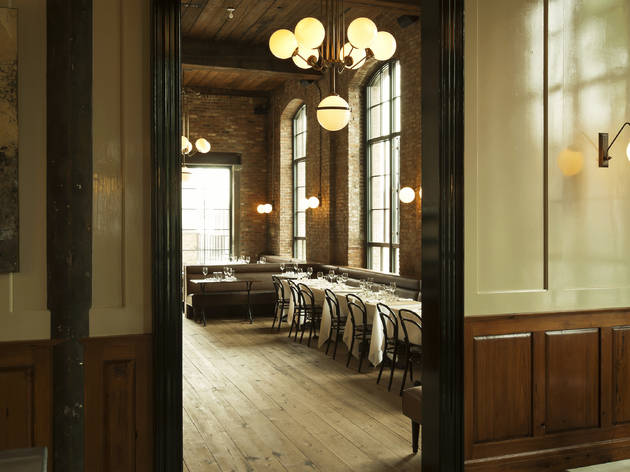 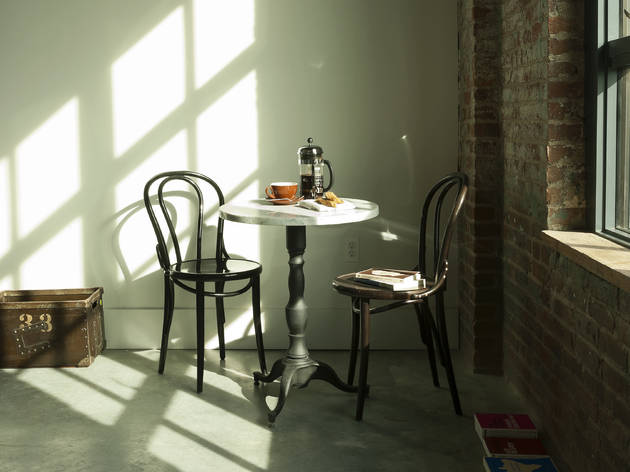 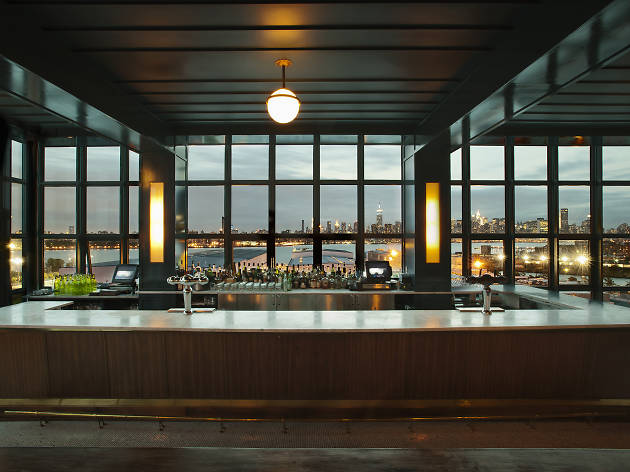 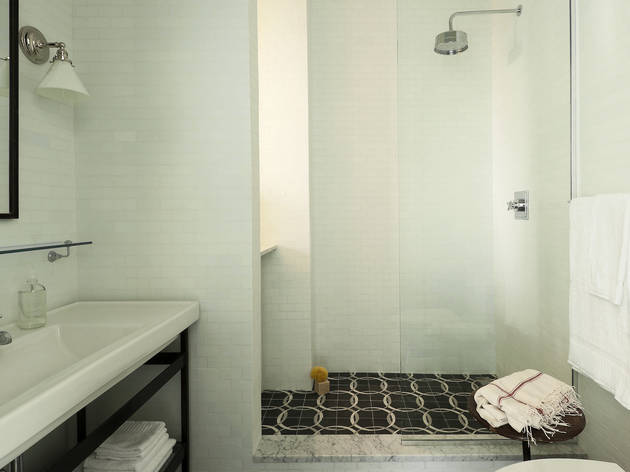 A factory built in 1901 gets a second life as a 70-room hotel with a beautifully designed bar and restaurant, retail space and lots of cool Brooklyn vibes

The Wythe may not be the first boutique hotel in Williamsburg, but it’s the first to capture the neighborhood’s elusive hip factor. A 1901 cooperage near the waterfront has been topped with a three-story glass-and-aluminum addition; on its facade, a 50-foot-tall "HOTEL" sign, created from salvaged tin signage by artist Tom Fruin (of Watertower fame), becomes a neon-lit beacon at night. In many of the guest rooms, floor-to-ceiling windows offer a panorama of the Manhattan skyline or face a cool Steve Powers graffiti mural that recreates vintage Brooklyn advertising. Heated concrete floors, exposed brick, reclaimed-timber beds and witty custom wallpaper (including the Wythe Toile, inspired by local street scenes) create a rustic-industrial vibe, offset by fully plugged-in technology: A cable by the bed turns your iPhone into a surround-sound music system. The utilitarian subway-tiled bathrooms are stocked with luxurious Turkish towels and eco-conscious Goldies products created by a former Diner staffer.

Neighborhood: The Wythe Hotel is nestled among plenty of hip Williamsburg hangouts including live music venues like Brooklyn Bowl, nightclubs like Output and vintage shops like Beacon’s Closet. The shops on Bedford Avenue are just a short walk away, as is McCarren Park.

Time Out tip: We’d be remiss not to mention one of the borough’s most popular theaters: Nitehawk Cinema, a dine-in cinema with a full bar that shows both new releases and retro favorites. Dinner and an indie film, anyone?

The Wythe is an absolute classic. Come here for the name, stay for the dreamy roof terrace, decent restaurant and effortless charm of  surrounding neighbourhood. The room was spacious, with great little touches like a four-station radio and well-stocked bar. Make sure to stop in at the Brooklyn Brewery too - it's just down the road!

Great rooftop to watch sunset behind the best city in the world. Get there early as there a line almost all the time & you can easily spend sunset on line to get in if you don't time accordingly. Nice selection of drinks to enjoy while you wait for sunset. Not summer?? Cozy on up as the rooftop is great all seasons. Grab a bite to eat downstairs. Can't go wrong with anything served on the menu. Bartenders were awesome & gave me a sample of the tap beers to help me select the proper beer. Totally can see why this is on list of must go to places of Brooklyn.

Always a stop off on my tour for out of towners. The perfect place for a sundowner cocktail watching the sun set behind one of the most iconic city skylines in the world. Just gorgeous all year round. In the Summer it's the perfect outdoor rooftop and in the Winter it has that great cosy vibe. If you're heading there in the Summer to catch the sunset though, make sure you head down there with a couple of hours to go until the sun sets as it can get really busy and over the weekends there's often a line outside to get in. Also beware of the frozen cocktails they serve in Summer - ridiculously tasty AND alcoholic. I did warn you....

Out of the few rooftop bars in the area, this one is likely the best. It's the only one with a real view of the Manhattan skyline (though a large portion of the rooftop deck looks out over Brooklyn, not the water) and is a great place for dates or parents. The bartenders know what they're doing and can mix you up anything you like, though I usually go with a simple gin gimlet. Great place to watch the sunset from either outside or from one of the several tables against the glass windows inside. At night a DJ gets the place bumping. It's a really popular spot and the lines start up around 5, so get there early or prepare for a long wait. Stop by the Brooklyn Brewery, just down the street, beforehand!

Got married here! Absolutely beautiful and amazing down to every detail. Whether going for a brunch or dinner at Reynards, going to a screening (in their private screening room), having drinks in their upstairs bar, or staying in one of their suites... definitely 5 stars +