Whether you're looking for the best jerk chicken or a refreshing Dark 'n' Stormy, Little Caribbean in Brooklyn tastes like a getaway to the islands.

Travel looks a lot different this year ever since the current crisis hit, but New Yorkers are still hungry to escape. And more often than not, especially these days, people are traveling because of food. While flying to Chiang Mai or Copenhagen isn’t yet possible, we still want to go apple picking upstate as the leaves change colors, and we’ll even plan a food-filled road trip.

But you don’t have to leave the five boroughs for a culinary adventure that could take you around the world just a subway ride away. At Time Out New York, we’ve launched our Food Vacation series that let’s you explore different countries and cultures through local businesses and the people behind them.

First up: Little Caribbean. Shelley Worrell, the founder and chief curator behind caribBEING, recently served as our guide to this section of Brooklyn on the corridors of Flatbush, Church, Nostrand and Utica Avenues. It’s an area known as one of the largest and most diverse Caribbean-American-Latinx communities outside of the West Indies.

Here’s a look at our culinary-themed vacation: 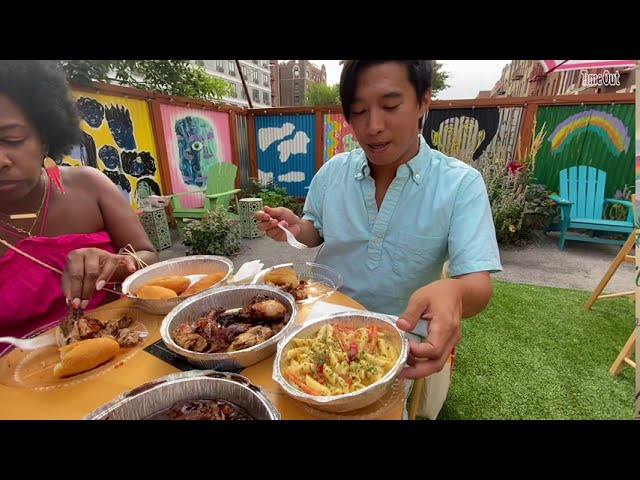 If you want to find out more about some of the spots we visited in Little Caribbean, here’s a rundown of some of the best spots:

This third generation, family-owned Caribbean bakery has been open for more than 50 years. One whiff of the sweet currant rolls, and we dare you to eat just one.

Peppa’s Jerk Chicken opened its original location in 2004 along Flatbush Avenue, where there are countless West Indian restaurants serving jerk chicken. But Gavin Hussey quickly stood out for his smokey, perfectly grilled poultry and became an institution (LL Cool J shot some scenes for his 2014 song “Hustler” here).

This fun rum bar has an inviting backyard garden and once you’ve parked yourself in a lawn chair or one of the socially-distanced tables, you’ll feel like you’re taking an island vacation as you sip the potent cocktails.