Tavern-style pizza in NYC by way of Chicago

The decades-old debate surrounding NYC pizza versus Chicago varieties continues into its nth decade with the recent opening of Emmett’s on Grove, a follow-up to Emmett Burke’s original eponymous deep-dish destination nearby.

In addition to knife-and-fork pies, the original Emmett’s brought Chicago-style hot dogs and Italian beef from the city by the lake to the West Village in 2013. Headlines flew film-noir style all the way from the Spring Street subway stop to Tribune Tower. “Midwesterner challenges the NYC slice,” our local tabs roared. “Its true,” the Second City’s venerable broadsheet shrugged. Nine years later, Emmett’s is counted among the best pizza places in the five boroughs. To this day, it has the city’s closest facsimile to deep-dish.

Burke's new venture aims to replicate that success with tavern-style pizza. Deep-dish’s diametric opposite, a tavern-style pie has a thin, brittle crust, leaves the sauce beneath the cheese, and gets sliced into manageable, hand-held squares versatile enough to serve as hors d'oeuvres or dinner.

Both the friend who recently joined me at Emmett’s on Grove and I have spent a lot of time eating deep-dish and tavern-style pizza in and around Chicago. Like Emmett’s before it, EoG's contribution to the latter category is the closest approximation we’ve seen in NYC.

Poised on a wire stand, the 14’’ pies (starting at $20) have geometric lines that are nostalgically identifiable to anyone who’s had a square around Chicagoland. Their taste and texture are ringers, too, with a snappy crust, slight chew and toppings like pepperoni, green peppers, giardiniera and especially on-the-nose sausage generously distributed from center to perimeter. Unlike the cumbersome, casserole-like layers of a deep dish pizza or more spaciously arranged add-ons that slide off some New York slices, Emmett’s on Grove’s tidy tavern pies balance flavors across each bite.

One pizza can reasonably satisfy two, but a few other mains are equally worth table space. The Chicken Parm ($28) is wonderfully comforting, served with lovely fresh pasta listed as spaghetti on the menu but more closely resembling linguini on the plate. (“It’s a thicker spaghetti that resembles more of a linguini,” Burke says through a rep. “Some might say bigoli!”) Its nicely-fried cutlet and gooey cheese warmly recall red-sauce specials in either city and beyond.

Ideally-executed baby back ribs ($27 for a half-rack, $35 for full and served with French fries or a baked potato in either case) are the new spot’s standout. They’re baked for five hours and smothered in tangy, house-made barbecue sauce. Try to pick one up by the bone and the meat slides clean off in a fashion many local BBQ spots have yet to perfect. The sauce is applied a tad too thick, but this can be easily remedied with a little DIY redistribution.

Emmett’s on Grove’s space—half below sidewalk-level with low-ceilings and an L-shaped bar up front, throwback wood paneling and a larger dining room with big booths in the back—seems best suited for pitchers of Budweiser. However, cocktails like the rummy mai tai, mezcal-based la cura and classic martini (each $16) are proficiently prepared punchier pairings. Beer and wine are also available.

The Vibe: A modern throwback with midwestern-adjacent menus and aesthetics that stop short of theme territory.

The Food: Tavern-style pizzas by way of Chicago get top billing, but mains like falling-off-the-bone baby back ribs threaten to steal the show.

Time Out Tip: Treat the thin, 14’’ pies like an app, follow ‘em with terrific baby back ribs or chicken Parm and you’ll likely have enough to take home.

Emmett’s on Grove is located at 39 Grove Street and is open Tuesday and Wednesday from 5pm-12am, Thursday and Friday from 5pm-1am, Saturday from 4pm-1am and Sunday from 4pm to 11am. 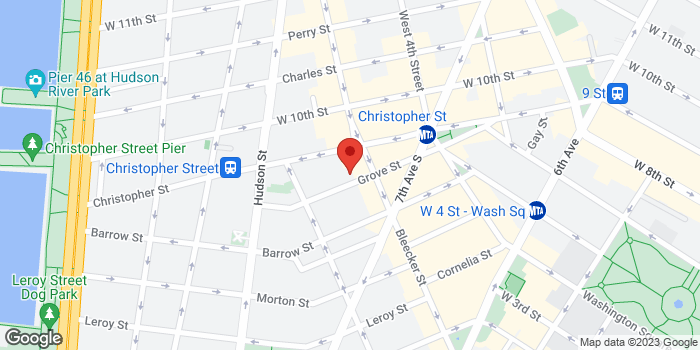