Time Out’s critics choose their favorite restaurants and bars of 2014, including a standout taco stall, a brainy gastropub and more

Our trusty critics put in their two cents on this year’s slate of restaurants and bars. On the menu are Jewish-meets-Japanese noodles in Hell’s Kitchen, stellar Vietnamese in grungy Ridgewood, Queens and a dessert hybrid that took over Soho and then the world. These are the restaurants and bars that wowed Time Out critics in 2014. 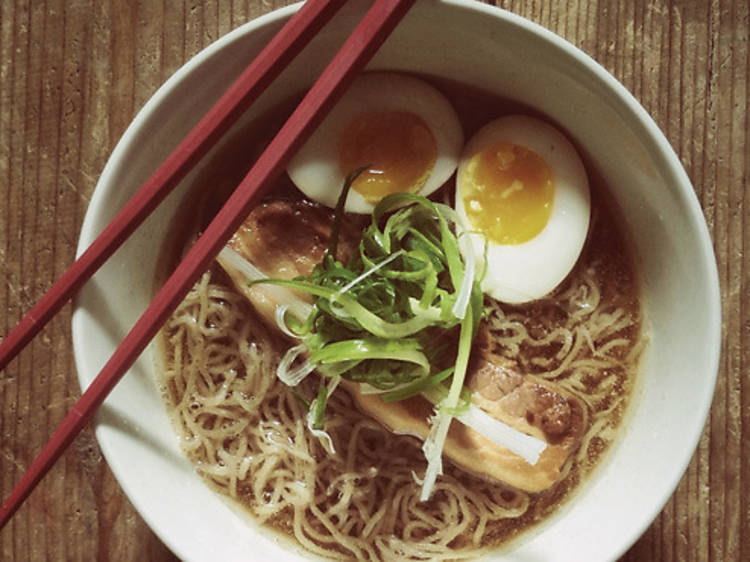 As much as Gothamites value their culinary icons—the square slice, the knish—there’s something inherently New York about flipping the bird to convention. So when word hit the blogosphere that a Long Island mensch had the chutzpah to untangle Japanese ramen in a Hell’s Kitchen food court, it wasn’t met with a raised eyebrow, but with deafening buzz. That’s because that noodle-slurping Syossetan is Ivan Orkin, a world-class Japanophile who’s served intoxicating chili-eggplant mazemen and smoky whitefish donburi in the city that knows noodles best: Tokyo. That ballsiness paid dividends abroad, launching an Orkin folklore that’s fully realized at his bustling Gotham West Market stall. There, Orkin checks off yet another remarkable feat: With those deep and deeply satisfying bowls, he’s turned a cramped cafeteria counter into the hottest seat in town—well, until his next spot opens.
Read more 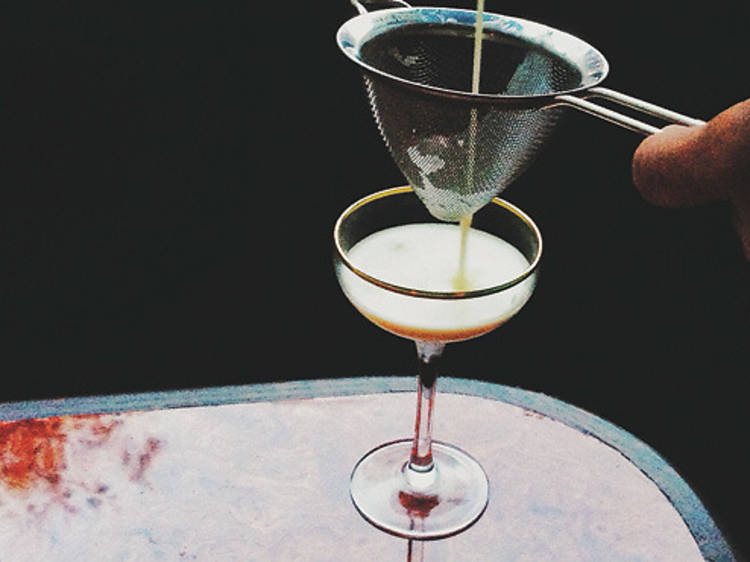 The past year has seen a move from the bouffant swing of the Mad Men era to gritty-glam American Hustle swagger, and no one benefited from that stylistic turn more than Greg Boehm, the Cocktail Kingdom barware geek behind this Galliano-drenched ’70s salvo. The splashy hang—attracting boozers too young to remember the era and those old enough to wish they didn’t—takes its cues from the decade’s feather-haired funk and the bad-rap drinks that remain largely spurned by cocktail savants. PDT vet Don Lee treats maligned concoctions like Harvey Wallbangers and Buttery Nipples with a reverence that rivals storied pre-Prohibition sips, bringing them up to code for today’s discerning drinkers without losing one ounce of that irresistible frivolity: Even with its enzyme-clarified orange juice, the Wallbanger is as approachably sweet and flamboyantly bright as it was when the Gibb brothers were topping the charts.
Read more
Advertising 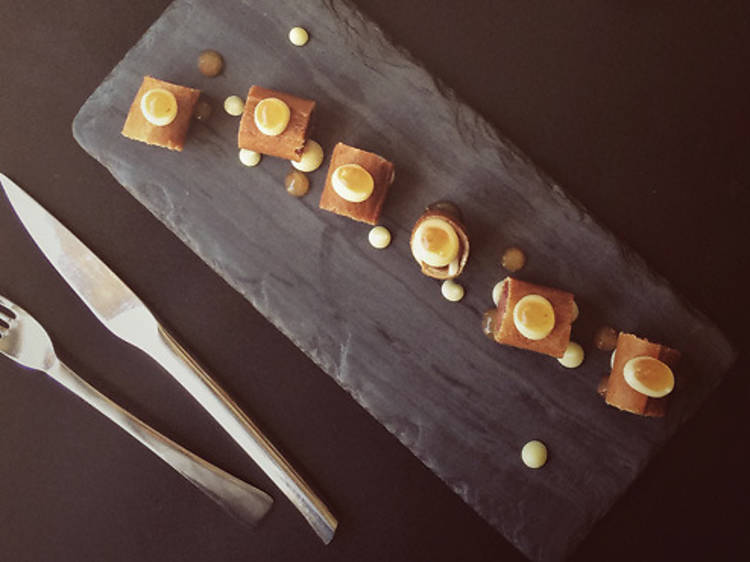 The mere phrase avant-garde can scare off your average-joe diner or wrest a sigh from a well-versed epicurean. But at this playful, pubby think tank—the smart-casual analogue to cutting-edge icon wd~50—Wylie Dufresne distills his kitchen chemistry for the everyman. Here, the chef performs mind-bending trickery with such sleight of hand, you won’t know it’s happening until the fork hits your lips. Gone is tweezer-food fussiness—you can have your clam chowder or pastrami-on-rye, but the soup comes studded with oyster crackers made of actual oysters. And the pastrami is transformed into jerky dust atop tangles of rye fettuccine for a bite as familiar as a Katz’s sandwich. But Dufresne’s best trick at Alder is pushing his geek wizardry out of its special-occasion confines, putting forth food you can—and want to—eat any day of the week.
Read more

Like a phoenix rising from the ashes, high-flying chef Ignacio Mattos—who flamed out Icarus-style with his weirdly brilliant plates at Isa—powered back onto the scene with Estela. Pulling a page from the downtown textbook, the fetching restaurant turned it out with silvery antiqued mirrors, a smooth marble bar and sultry globe lights. But that’s where the ruse ends: The kitchen’s still got a freak behind the stove. Mattos’s brand of bizarro food goes undercover in semi-familiar forms—a fish-sauce-smacked beef tartare tinted nutty with sunchoke chips, say, or petite slices of luscious rib eye ceding the plate to smoldering eggplant. Flush with good wine from Thomas Carter’s smartly toned list and soothed by gut-grabbing plates, you may not even notice that the food’s got kink. Mattos thrilled (and faltered) with his in-your-face edginess at Isa; at Estela he’s proved that sometimes the best line of attack is surprise.
Read more
Book online
Advertising 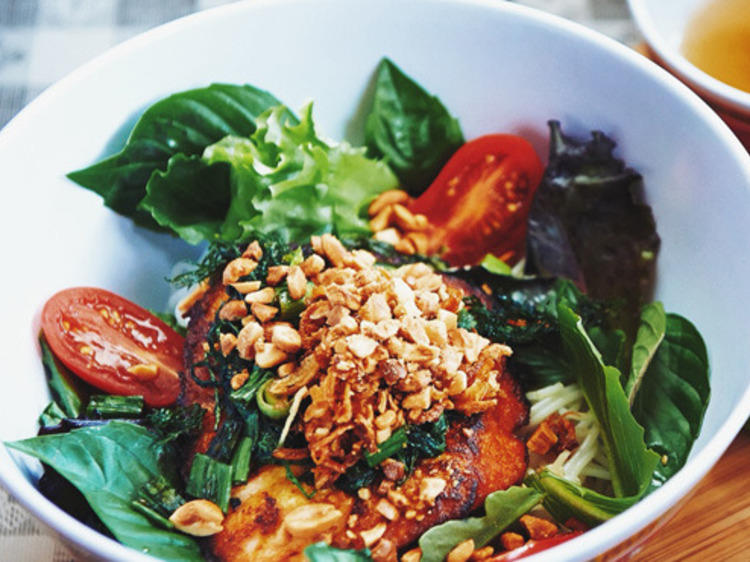 In ye olden days (you know, 2008) Bushwick was the rough-and-tumble restaurant frontier of NYC—but one trip to Ridgewood makes that hipster enclave look as snuggly-safe as Sesame Street. Bunker’s derelict block looks like a Law & Order crime scene, the last place you’d think to find an Eleven Madison Park alum whipping up the city’s most deliciously disarming Vietnamese, smoothing house-made pâté for a swine-lover’s banh mi, and wringing every last drop of flavor from a freshly killed free-range bird for the chicken curry. Jimmy Tu isn’t the first chef to bring fine-dining chops to street food, but no New York cook before him has bestowed Vietnamese with such cool-kid status and unmitigated respect. Bunker’s far-flung locale may have hyped up its rebel mystique, but for food this fly, we would’ve hopped a plane to Hanoi.
Read more 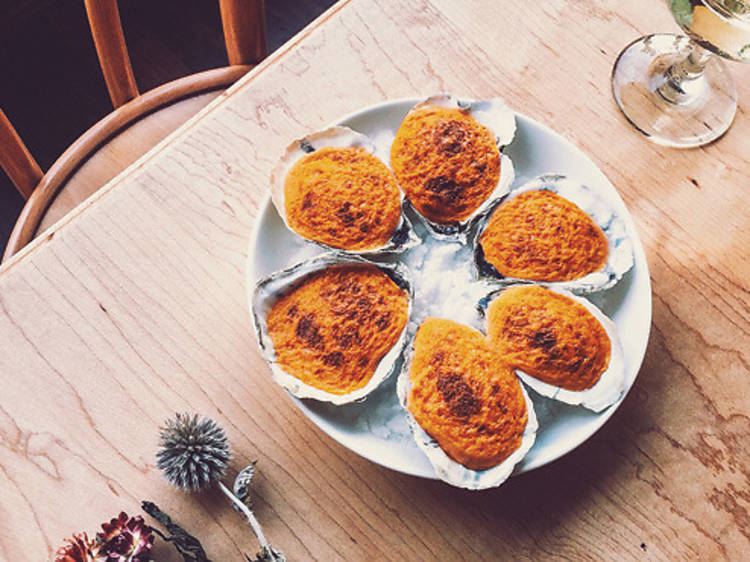 The beyond the kale award

After the locavore revolution rooted itself in Brooklyn, nothing in the borough was ever the same: Beets bleed red on cutting boards from Park Slope to Bushwick, and kale engulfs ’hoods like a renegade weed. In a time when any restaurant worth its weight in ramps sources locally, Dover is proof that merely hauling food from farm to table no longer cuts the artisanal mustard. Building on their pint-size hit Battersby—where, incidentally, they rock one of Kings County’s best kale salads—Walker Stern and Joe Ogrodnek have forged a seasonal spot that’s more polished sheen than three-day scruff, zooming in on the food instead of asinine mason-jar preciousness. And rightly so: The Ducasse-trained chefs turn out flavor bombs like fish-sauce-charred lamb ribs and luscious pork belly jolted with quince jus. On the crowded road from farm to table, Dover leaves the locavore pileup in the dust.
Read more
Advertising 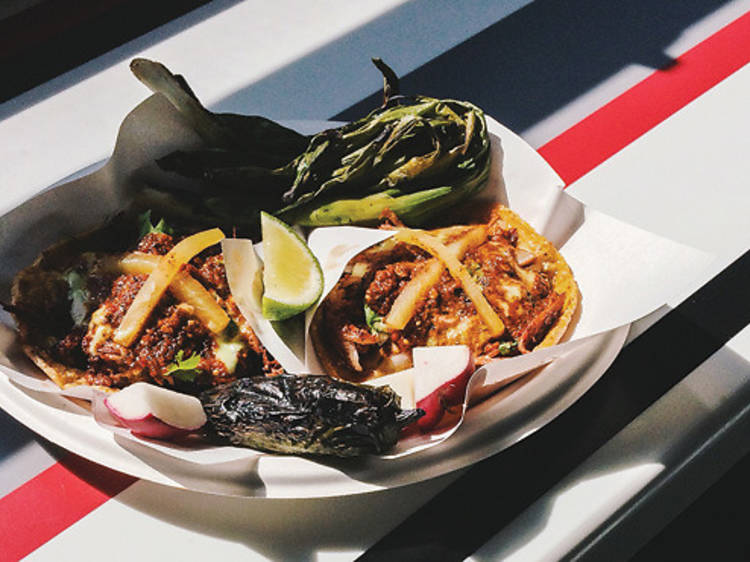 No one expected to find the city’s most legit new taqueria inside Chelsea Market, the antimall known more for artisanal olive oils and Anthropologie threads than real-deal street food. But Los Tacos No. 1 was the year’s great phantom punch, hitting the scene without preopening hype and stunning early lunch crowds with the type of mom-and-pop Mexican fare that’s kryptonite to smug Angelenos. The cheerful stand may lack the grit of a Tijuana street cart, but the flavors arrived todo intact, anchored by jugs of agua fresca and mounds of fresh masa pressed into small tortillas. The griddle-puffed stunners deliver meats amped up to the nth power, in tacos like the chili-marinated pork adobada, carved straight off a glistening spit with bright chunks of pineapple, and in the especial—a flash-fried quesadilla variant stuffed with beefy carne asada and oozing Monterey Jack. For Latin food this damn fresh, the standing-only counter is no problemo: After inhaling those gloriously sloppy packages upright, you’re back in line before even considering a seat.
Read more
Order delivery 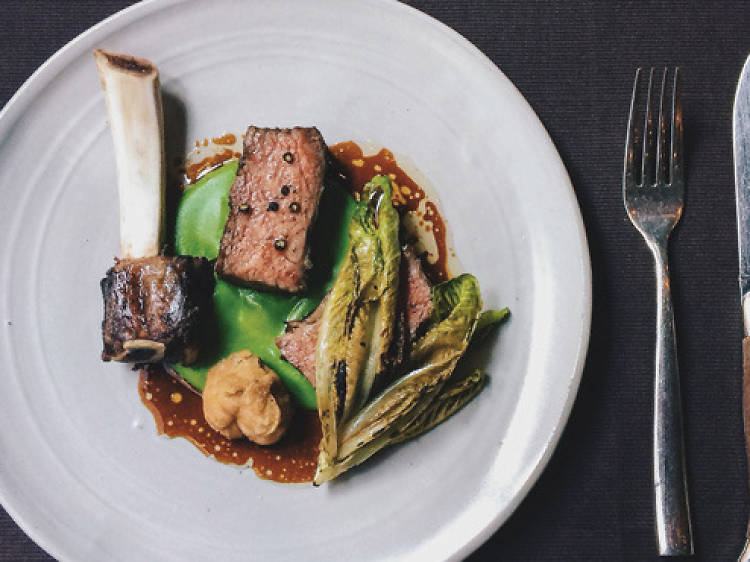 The best Russian rebuke since the Cold War

The desire to one-up Russia is in America’s DNA. So when hot Slavic mess Brasserie Pushkin tanked after just nine months, it was only a matter of time before a New American hero stepped up. With Betony, Eleven Madison Park trenchmates Bryce Shuman and Eamon Rockey installed a new regime in its old space. The cherub murals and crystal chandeliers as plentiful as shirtless Putin photos were wisely scrapped for a clipped-in elegance and suavely understated servers. But the most fundamental (and welcome) about-face is the food: Unlike Pushkin’s self-serious, pelmeni-kindled misfires, Shuman’s plates are sucker-punch good, marvels of military-precise technique and outright soul. Dishes such as an elegant canapé-like riff on the tuna melt showed off all-American winking humor, and others, like short ribs bathed in beef fat, are meant to be selfishly hoarded—leave sharing to the Eastern Bloc.
Read more
Advertising 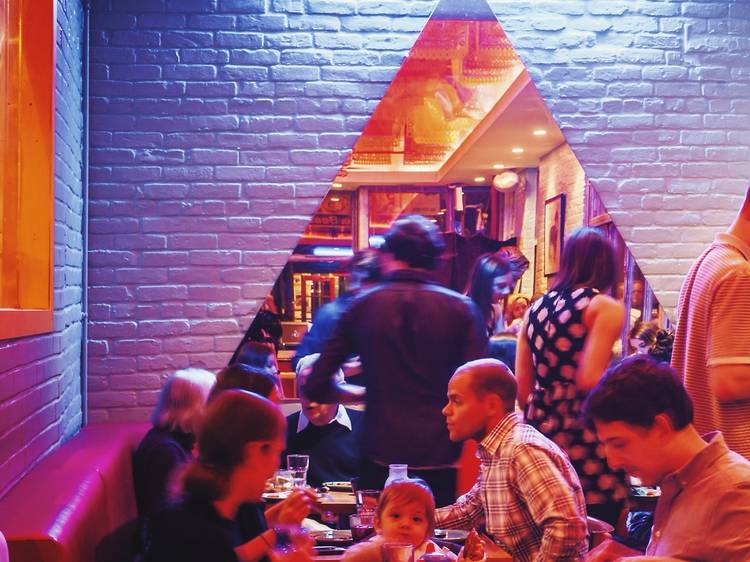 Danny Bowien had a good thing going at his jam-packed New York outpost of Mission Chinese Food, the sweaty Szechuan dive that racked up more celebrity fist bumps than the Church of Scientology. But you can’t put this iconoclast chef in a box—he is, after all, the dude who accepted a James Beard Award in Dries Van Noten and a pair of Jordan XIs. Telling him he can’t switch from Chinese to Mexican food is like telling Kanye he can’t design clothes. At Cantina, his South of the Border second act, the maverick chef has nimbly swapped Szechuan peppercorns for salsa while preserving the party vibe that’s become his tastemaker trademark. Food geeks came running for the San Francisco–style burritos, which hit the streets with as little warning as Beyoncé’s latest album. But Bowien’s Mexican ambitions run far deeper: Peek into the open kitchen and you’ll see the team nixtamalizing heirloom Anson Mills corn to make from-scratch tortillas, or supercharging fried wings with mole spices and splashes of crema. Lesson learned: When Bowien flips the script, get in early and often—you never know when he’ll be on to the next one.
Read more

In a year riddled with hokey Frankenfoods, none had the fresh singularity or profound reach of Dominique Ansel’s croissant-doughnut crossbreed. It was unquestionably the year of the Cronut, a sweet local oddity turned global phenomenon; a hoity-toity viennoiserie playfully repackaged for viral shareability. Within its first week of existence, the filled-and-glazed wonder had a trademarked name, a thriving black market and more impersonators than Lady Gaga at a Pride parade. Somewhere between the Glee shout-outs, legions of sugar-dusted devotees and the inevitable wave of food-snob haterade (first beloved, then backlashed—it’s the J-Law of pastries), that coveted gilded dessert box became a golden ticket, Ansel a modern-day Wonka and the Cronut the undisputed—and much-deserved—leader in the world’s dessert lexicon.
Read more
Order delivery