For fans of Comedy Central’s dearly departed Kroll Show, the duo of Gil Faizon (played by Nick Kroll) and George St. Geegland (John Mulaney) is as familiar as the towering sign outside Katz’s Delicatessen. As hosts of the public-access show Too Much Tuna, the crotchety turtlenecked Upper West Siders pranked their guests by presenting them with a sandwich piled high with—you guessed it—tuna. But the real comedic payoff came before and after the stunt, in the form of exquisite barbs attuned to the Ed Koch–era NYC of loudmouthed entitlement. (Take their segment with filmmaker Paul Feig, in which St. Geegland asks, almost bored, “Paul, you know when you peel off a yah-girt, there’s a little water on the top? Maybe that could be a movie.”)

Old friends who banter like a married couple, Kroll and Mulaney—both longtime New Yorkers—have known each other since their Georgetown University–undergrad days, moving through a parade of TV shows and stand-up gigs with the fluidity that marks their generation. (You probably recognize Kroll from The League and Parks and Recreation and Mulaney from Mulaney and Saturday Night Live.) Now, the oldest of New York traditions, Broadway theater, may have them settling down for a bit: Oh, Hello, a theatrical version of the act, settles in to the Lyceum Theatre this month after an Off Broadway run at Cherry Lane and a well-received national tour. It’s early when I meet them at French Roast in the Village, but their enthusiasm requires no coffee (we order it anyway).

So you’re doing your own original comedy show on Broadway. I can’t hide my being impressed.
Nick Kroll: Dude, we can’t either.
John Mulaney: We sometimes forget. Nick showed me a photo of the Lyceum with our photo up. It was like, Oh, my God. This is real. We’re actually doing this.
NK: It’s interesting because we’ve been living with this now for a while. I talk about it like we’ve got, like, lupus.
JM: We’re working with our doctor to find a solution. [Waitress arrives]
NK: I’m sorry to do this, guys, but I’ve gotta eat some food. I mean, I think I’m going to want to be adventurous, but in the end I’m going to have three eggs over easy, with bacon, please. And wheat toast.
JM: I will have the Irish oatmeal, please. And soda bread.

When did you decide to take Oh, Hello to the stage?
NK: We did the 92nd Street Y to promote Kroll Show, and it was so deeply fun, and people were like, “What’s next?”
JM: We’d done about seven minutes of preparation.
NK: And we were like, “We’re going to go to Broadway.”

You should start saying: “And there will be a movie.”
NK: This whole thing has felt to me, like, dead serious and a total joke.

Are you guys off book yet?
NK: John and Nick are off book; it’s George and Gil who have trouble remembering things.
JM: And the lines they can remember, they’re sick of and don’t want to say anymore.

“I can’t tell you how many times a week I get sent a cell-phone picture with people saying, ‘I saw George and Gil on the subway.’”—Kroll 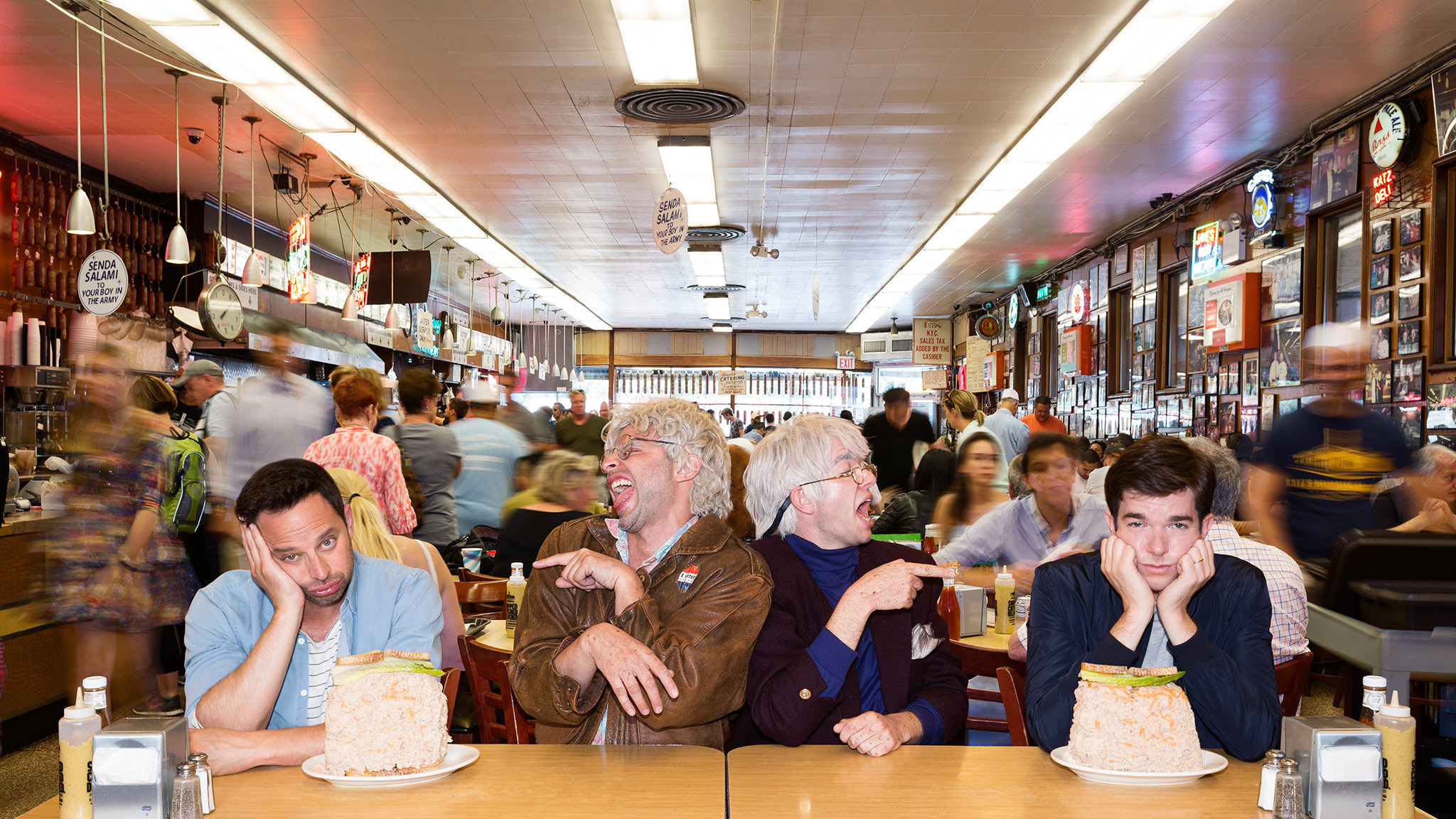 So it’s a precise way of getting at imprecision.
NK: Yes. For George and Gil, the show is really a “you’re welcome” to New York.
JM: It’s a victory lap.

You guys met in college. What did you see in each other?
JM: I saw that he was the director of the improv group, and I wanted to be in the improv group.
NK: But you thought I was Latino.
JM: I thought you were Latino.
NK: Which is the nicest thing anyone’s ever said to me.
JM: You had just spent a semester where?
NK: In Argentina.
JM: In Argentina, so he kept referring to Argentina.
NK: Was I really? JM: Yeah, and there’s his olive complexion.
NK: And I thought a 1920s street urchin had walked into the room and was mistakenly trying to audition.
JM: They thought that was my first character, but it was actually me.
NK: Very quickly, we realized there was a nice connection between us, comedically and friendship-wise, and by the end of that year, we were writing stuff together. Then I moved to New York, and John stayed in school.
JM: ’Cause you gotta stay in school.
NK: Yeah, Time Out New York readers, you gotta stay in school—at least until the end of your sophomore year. Then, honestly, you’re just wasting your parents’ money.
JM: But I would visit Nick up in New York, and he was already doing comedy at open mics. I got to piggyback on that and go, “Okay, it’s not amorphous: You get an apartment. There’s places where you can perform. You meet other people who perform. You form a little clique.”
NK: I’d been hosting a show with my friend Jessi Klein [Ed. note: now the head writer on Inside Amy Schumer]. We were having lunch with her, right here at French Roast.
JM: She got a salade niçoise with too much tuna on it, and we said, “Oh, no, no, no—that’s too much tuna.” It was the first time we joked about it. And then it was like: What if there were a talk show, and someone was like, “Too much tuna,” and everything grinded to a halt?

But these specific guys, Gil and George—where do they come from? Are they inspired by a particular source?
JM: We saw the template at the Strand Book Store. We saw these two guys, very much like George and Gil, in retrospect, maybe a little younger. Like in their late sixties but [wearing] turtlenecks and blazers. All their colors were Thanksgiving: brown and mustard and the occasional purple. And they were each buying a copy of Alan Alda’s Never Have Your Dog Stuffed.

Of course there’s more than one copy of that book at Strand.
NK: They’re not going to share one, even though they share a Murphy bed.
JM: They were clearly joined at the hip. So we followed them down the block. We heard them talk a little. They had that kind of cadence that became the Oh, Hello cadence. And we loved them. They rang a bell that was always in our heads: This type of guy who would have been a single eligible bachelor in Hannah and Her Sisters.
JM: There was a coffeeshop across from the Strand. They went in, and they each read their own copy.

That’s kind of adorable. It’s like a love story.
JM: It was very Bert and Ernie.
NK: Statler and Waldorf.

The concept is a lot more universal than the Upper West Side, right?
NK: I can’t tell you how many times a week I get sent a cell-phone picture with people saying, “I saw George and Gil on the subway,” “I saw George and Gil at the MoMA,” “I saw George and Gil at a coffeeshop.”
JM: But only those three places.
NK: On Twitter, people are always sending me a picture of two older men hanging out together.
JM: In linen and wool.
NK: That’s what was interesting about going on the road with the show: Everyone’s seen Woody Allen movies, everyone’s got a liberal, racist uncle. It’s kind of everywhere. We love—deeply love—these guys.

Does all of your comedy come from a place of affection?
NK: No.
JM: We’re not angry people.
NK: At least not right now. But to our therapists? I want to make that clear: Each of us has a team of therapists that we work with. Even when we’re not doing the show, we spend the majority of our time talking like these guys. I wouldn’t talk like someone if I didn’t love them and love being them.
JM: I feel like as we’ve gotten older, there’s more of us in them. With a few missteps, we could be them.

“I feel like as we’ve gotten older, there’s more of us in George and Gil. With a few missteps, we could be them.”—Mulaney 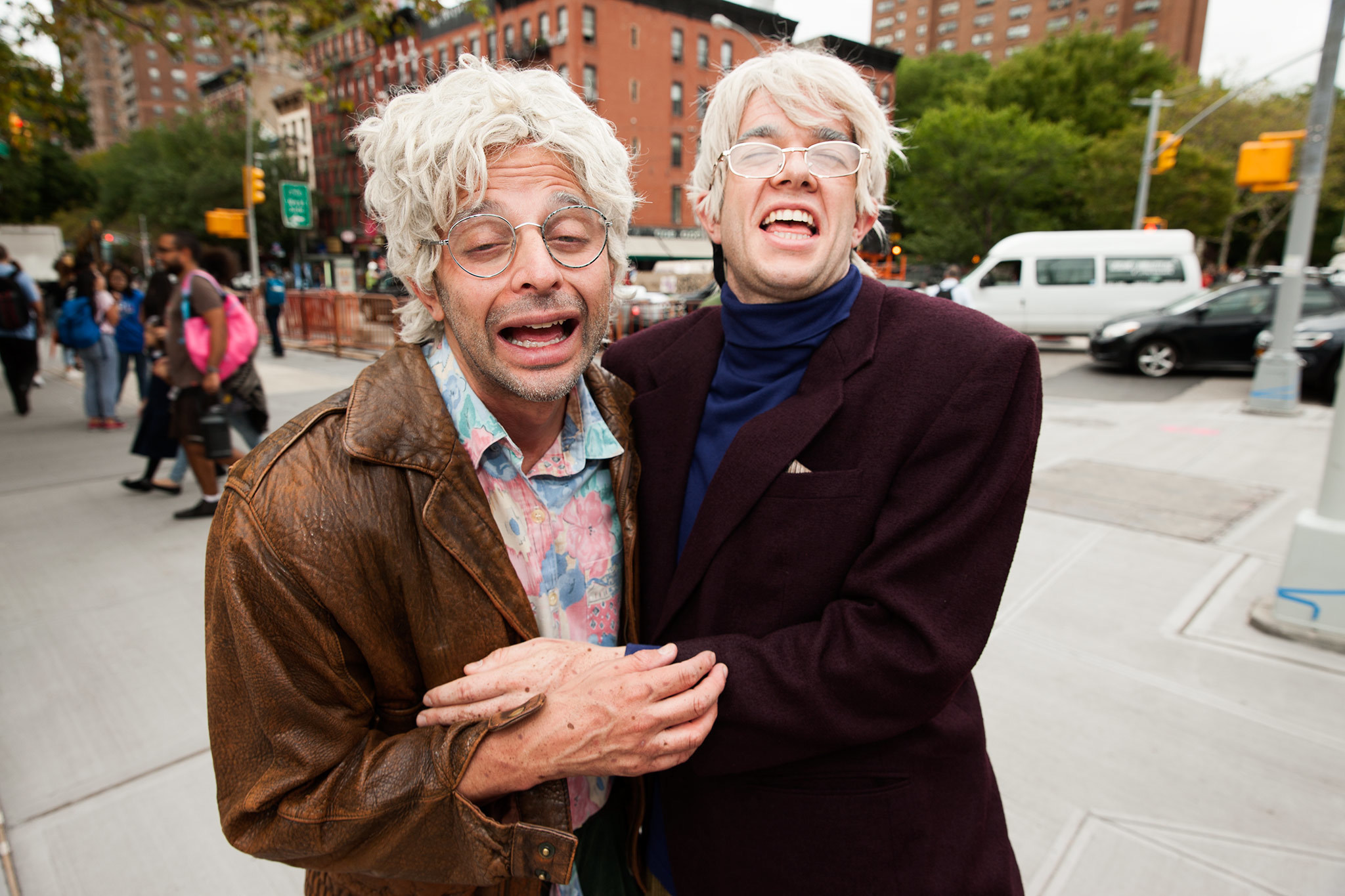 Is conversational kibitzing the kind of comedy you always wanted to do?
NK: Our goal was similar to what Mel Brooks and Carl Reiner did, or Mike Nichols and Elaine May. It’s like, here are two people who get a real kick out of each other. Nothing is more pleasing to me than listening to Reiner and Brooks make each other laugh in those recordings. You want to watch two people enjoy each other’s company. And John pays me a very nice salary to enjoy his company.
JM: And he sets up all my new iPads and stuff.

Do George and Gil ever get sick of each other?
NK: Constantly.
JM: There’s some underlying tension of: I could have done more without you. Which is not true. Neither of them would have done anything differently. And they’re each others’ greatest enablers. Gil should be as big as Richard Dreyfuss, and George should be as big as Philip Roth, and it’s just a typo that they’re not.
NK: As silly as it is, you’re watching two men who are deeply connected to each other. By the end of the show, the hope is that you’re like: I actually weirdly care about that groovy turtle and that mean old goat.

Do you think that Broadway is the best form of expression for this kind of relationship?
JM: For George and Gil, yes.
NK: Because that would be the artistic expression that those two men would do. They would go write and perform a play.
JM: I saw the revival of Company in 2006. The woman who took over the Elaine Stritch part, she was about to sing “The Ladies Who Lunch,” and this Oh, Hello–type guy sitting right in front of us turned around so everyone could hear and went: “Big shoes to fill.” It was like he had to get in his little comment, so we all knew that this was a revival. Which we all knew. 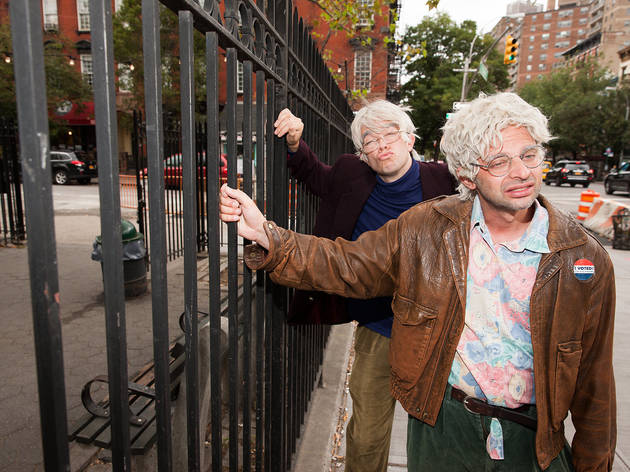