Take time out of your three-day weekend to honor the men and women who died serving our country during the Memorial Day Parade. NYC pays tribute to our fallen troops by hosting various commemorative services and processions. However, one of the largest and most historic marches is Brooklyn’s King County Memorial Day Parade. We have all the details you need to attend one of the best NYC events in May. Make sure to take advantage of all the awesome parties, BBQ hangouts and things to do during Fleet Week—the seven-day event which overlaps with Memorial Day weekend.

When is the Memorial Day Parade?

Memorial Day is on the last Monday in May every year, which means the parade falls on Monday, May 27, 2019.

What is the Memorial Day Parade?

Although there are multiple Memorial Day parades in New York (one in Queens, Staten Island, Bronx and two in Brooklyn), the Kings County Memorial Day Parade in Bay Ridge is the most iconic. In fact, it is one of the oldest traditions in Brooklyn now that it’s in its 152nd year. Catholic war veterans lead local service organizations in honor of fallen soldiers and their families at the parade, which is sponsored by the United Military Veterans of Kings County. Following the ceremony, there is a 21-gun salute by the U.S. Army at Fort Hamilton. The NYPD and FDNY also march, Brooklyn high-school bands perform, and antique fire trucks and autos are on display. This year, New York State Senator Marty Golden acts as Grand Marshal.

Where is the Memorial Day Parade?

Brooklyn’s 152nd Kings County Memorial Day Parade kicks off at 11am at 78th St and Third Ave, marching up to Fourth Ave and ends at John Paul Jones Park on 101st for the memorial service.

How do I get to the Memorial Day Parade?

What can I do nearby the Memorial Day Parade?

Bay Ridge is one of the coolest spots in Brooklyn that boasts a few hidden gems. Enjoy authentic Italian cuisine at Gino’s restaurant and take a lovely stroll through Narrows Botanical Gardens—which is near the American Veterans Memorial Pier—for stunning skyline views of Manhattan. 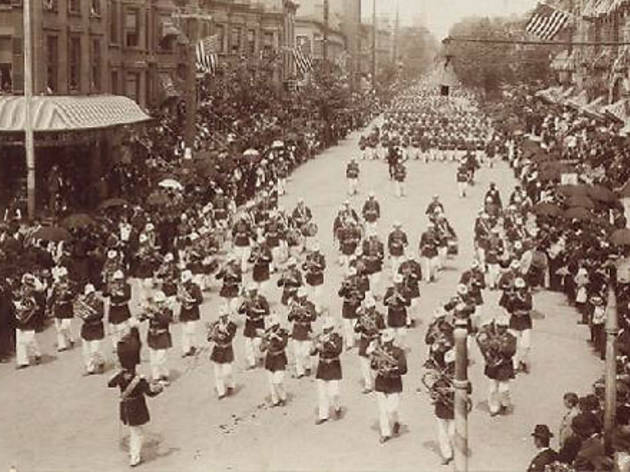 Photo of the day: Memorial Day Parade in 1895