‘Walk around a bit, have sex, eat’: Anthony Bourdain’s guide to Paris

The best places to eat, drink and stay in the City of Light, according to the legendary chef and traveller

Anthony Bourdain loved Paris. The chef, writer, presenter and indefatigable traveller first visited as a child, as he detailed in his book ‘Kitchen Confidential’. He made the first and 100th episodes of his TV travelogue ‘No Reservations’ there, along with an episode of ‘The Layover’. And he was emphatic about converting the sceptical. His posthumous book ‘World Travel: An Irreverent Guide’ has been created by his long-time editor Laurie Woolever, building on his previous writings and an hour-long interview before his death. In this extract, Bourdain offers a whistle-stop tour of his favourite spots in Paris – and what drew him back, again and again, to the people, culture and food of the French capital.

He was especially keen to dispel the fears of the reluctant. Urging visitors to avoid the obvious, he stressed that ‘the absolute worst thing to do when you come to Paris is plan too much’. The Eiffel Tower, Notre-Dame and Arc de Triomphe were not on his list; instead, he suggests an altogether more relaxed trip. ‘Walk a little, get lost a bit, eat, catch a breakfast buzz, have a nap, try and have sex if you can, just not with a mime. Eat again.’ Yes, please.

Bourdain wasn’t, however, immune to the romance of the place. He was as gushing about the city as any other artistic type, admiring locals’ appreciation for the good things in life. ‘To some extent, the stereotypes are true,’ he said, recognising the city’s ‘un-American propensity for high quality of life’. A lifelong devotee of excess, the chef delighted in ‘fabulously oozing cheeses, rich sauces, historic wines, the kind of thing that tends to pigeonhole a culture, make you think it’s all luxury and sodomy’.

His love affair with Paris was an enduring one. Bourdain thought it was ‘one of the greatest, most beautiful, most magical cities in the world,’ and his recommendations – spanning cafés, restaurants and hotels – are enlightening and intriguing in equal measure. Read on to discover his ultimate guide to the city. 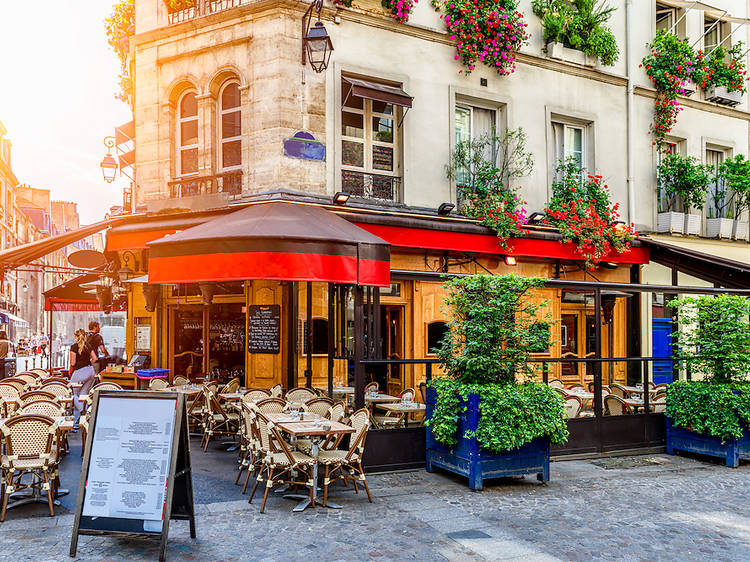 ‘Ah, Paris, city of light, city of love, city of… breakfast? Yes, please. The most important thing to do the instant you arrive in Paris is stop. Find someplace inviting, and slip comfortably into the Parisian pace of life. It’s no accident that the café is so closely associated with the French. And what do we have here? We have a cup of coffee and a ham sandwich, a row of chairs all pointing in one direction, a little table staring out into the street… the simplest of life’s pleasures, and yet for many Parisians, this can be an afternoon’s entertainment.

‘And I think this gets right to the kernel of what distinguishes the French. Once you allow your senses to guide you, you may begin to find pleasure in many things you would ordinarily overlook. You are now ready to begin to graze through the wondrous, sensual feasts that elude so many of us when we take trips here.’ 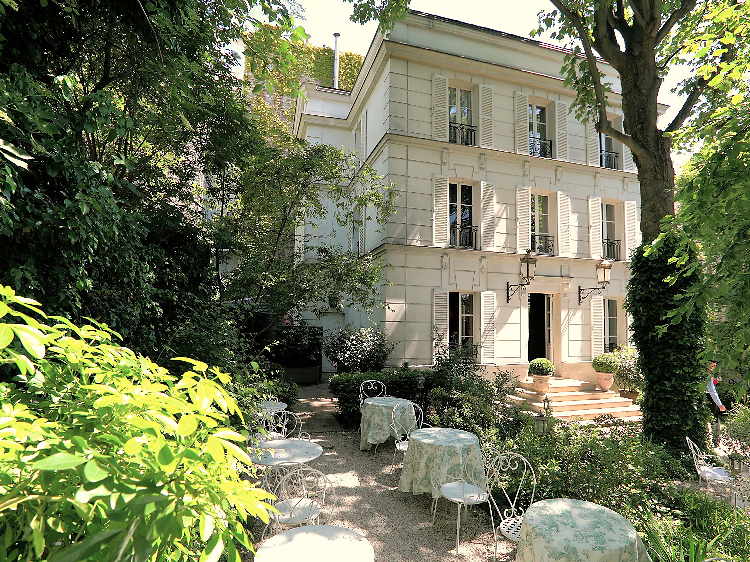 On his favourite Parisian hotels

‘Now, here’s the thing about hotels in Paris: you can go the Henry Miller route and wallow romantically in squalor, or live it up big time. For a luxurious, high-end option, there’s the elegantly discreet Hôtel Particulier, located in the heart of the historic Montmartre, nestled in a secret alleyway known as the Witch’s Rock Passage.

‘Me, I always stay at L’Hôtel in Saint-Germain-des-Prés. A very discreet joint known for being a love shack to the tragically hip for ages. Even more important, it has the necessary distinction of having had famous people die there. In 1900, the author Oscar Wilde kicked the bucket in room 16. This was his last base of operations for a legendary three-year bender that ended badly.’ 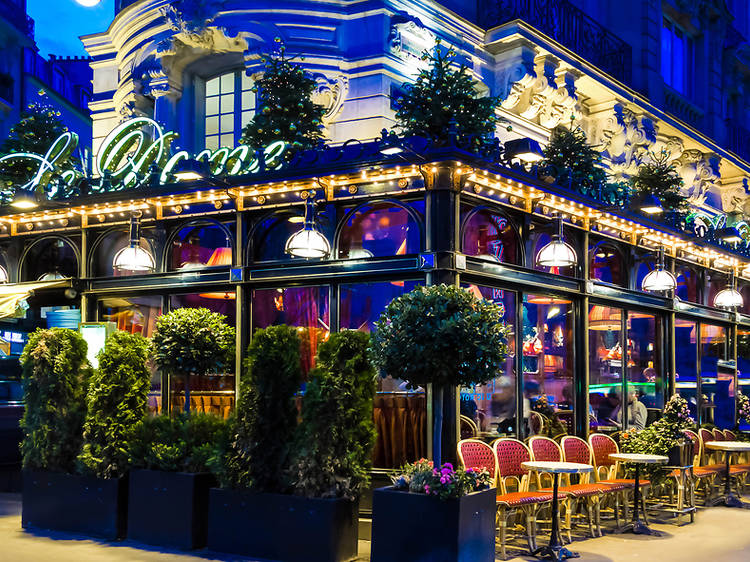 On his favourite Paris restaurants

‘In the English-speaking world, there has always been a certain ambivalence about taking pleasure at the table. There has been this notion that if you take too much pleasure in your food, then it might somehow lead to bad character. It might lead to harder stuff, like sex, for instance. I think the French have always understood that, yeah, hell yeah, it does lead to sex, and it should. That residual sense of food being good, food being important, food being worth waiting for, and food being worth spending time with: eating is, and should be, a joyous occasion.’

‘About the classic French bistro, I am a sentimental fool. To my way of thinking, there is no greater culinary institution in France than the old-school dino-style, unchanged-by-time classic Parisian bistro. And this place, Bistrot Paul Bert in the 11th [Arrondissement], is one of the best. However people are cooking one hundred years from now, whoever is cooking, will always, and must always, love and respect this.’

‘Dark street, no big sign, curtains drawn out in front. Step inside, you’re in another world. I mean, this is the way to eat. It’s about food. Sometimes you see the uninviting door and just have to go through it. Chefs play this game where they ask each other, ‘What would be your last meal on death row?’ Almost always, the answer is something simple and hearty that mom made. Well, here, they serve what little French boys wanted for dinner: boudin noir, fromage de tête, côte de boeuf with a little sel gris.’

‘One of the great meals in memory. It looks like a noisy, minimally decorated pub. Not formally trained and personally, along with only a couple of other cooks, manning the ridiculously tiny kitchen, chef Iñaki Aizpitarte has a single prix-fixe menu a day. In order to be a true revolutionary, you have to be willing to completely destroy the old. And I don’t think any of these guys is interested in doing that. I think they clearly love the old.’

‘The hardest reservation in Paris, they say, is not at some ultraexpensive temple of gastronomy. It’s at this place, Le Comptoir, what Eric [Ripert] has called the perfect bistro. He’s also very good friends with the elusive chef-owner of Le Comptoir, Yves Camdeborde, [who] used to run a more haute cuisine kitchen, but after 12 years, decided he’d had enough, and wanted to open a more casual place. Right next door, there’s L’Avant Comptoir, a tiny, standing-room-only French small plate and wine bar. I jam myself in there with a bunch of other people who are getting loose before they sit down for dinner, or waiting for a table, or just, like, munching on small plates of some tasty, tasty shit. Notice the communal bread and stick of butter. Just squeeze in and grab and smear.’

‘If there’s two things you do in Paris, this would be one. It’s an old classic, and I mean classic with a capital C, brasserie in the Montparnasse district. After the mime incident, I feel my producer is unlikely to protest when I get a really fucking expensive bottle of wine and the royal deluxe version of the best shellfish tower in Paris: oysters, clams, shrimp, big fucking crabs and also the classic langoustine, periwinkle and whelks. You’re going to get your hands dirty doing this, by the way, okay? There ain’t no way around it. They give you all the tools, but ultimately, you have to dig in, crack, skewer and suck your way through this thing.’

‘There were some places in Paris that were way ahead of the others – early adopters of young, biodynamic wines, and the sort of my-way-or-the-highway menus that are popular now. Although it’s been in business for 30 years, the owners of Le Baratin have always been using biodynamic, young wines since the beginning. And chef Raquel Carena’s cooking is generally considered to be some of the very best in Paris.’

‘World Travel: An Irreverent Guide’ is published by Bloomsbury (UK) and HarperCollins (USA).