It's high (tea) time that Singapore's new breed of tea brands are stepping up. Coffee drinkers may be rampant, but we'll always love the calm and class that comes with tea drinking. Dropping a touch of modernity into this afternoon delight, here is a list of local tea brands and blends to try. 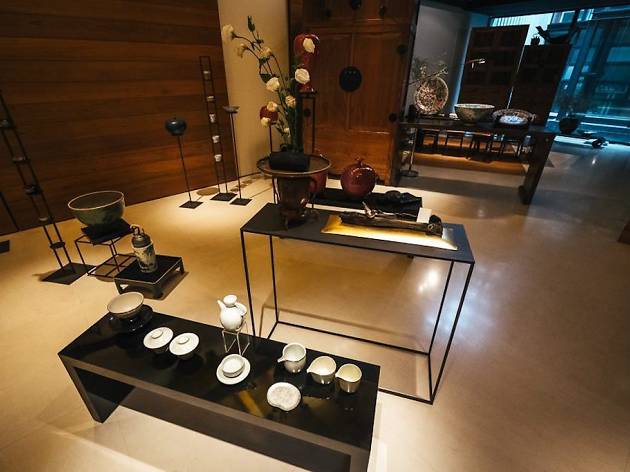 A tea experience at Tea Bone Zen Mind is a must-do, especially if you've got a love for tea culture. The two three-storey tea room beautifully marries old-world charm with modern aesthetics, familiar tastes with new aromas, and gourmet nosh with street eats. Founder Carrie Chen has traversed the globe for fine quality Chinese, Japanese and English teas and artisanal teaware, even creating her very own blends. Sample some teas like lychee oolong, pu er san cha, kukicha and more. Best part – you can also shop and bring home the blends you like to prolong the tea-drinking experience. 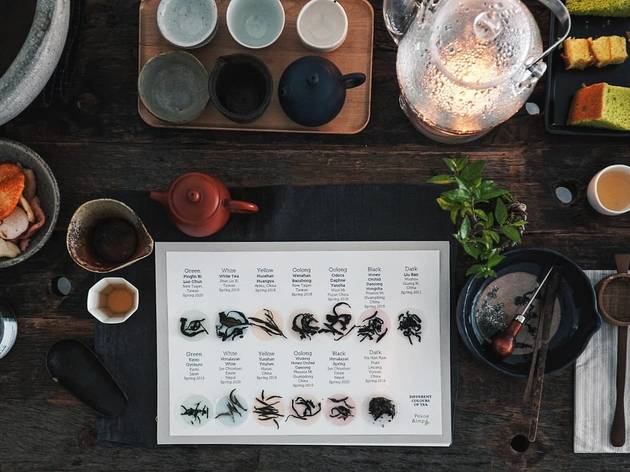 Started by passionate tea drinkers, Pekoe & Imp is an online tea store that specialises in specialty single-origin full leaf teas. Shop from its variety of green, white, oolong, black and fermented teas. The oolong selection is something to check out if you're keen to explore the different types and flavours of oolong – its oolong is also used in the artisan chocolate bars by local brand Fossa Chocolate. 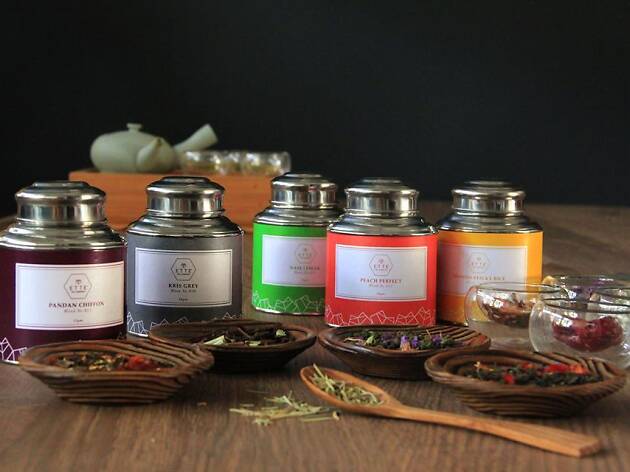 Nasi lemak, spicy fortune cookies and silver dust aren't usually the words you find on a packet of tea, but ETTE's blends are daring enough to bring these flavours to its brews. Its loose-leaf-and-bits tea are packed in pretty caddies and sachets and come in a variety of intriguing flavours like Pandan Chiffon and Kris Grey. The Pandan Chiffon evokes memories of the childhood snack, while the Kris Grey spikes Earl Grey with South-East Asian ingredients, and the flavour dubbed ‘The Moon Represents My Heart’ brings together milk oolong, coconut, lotus stamen and bergamot. All tea blends cost $28 for 50g. 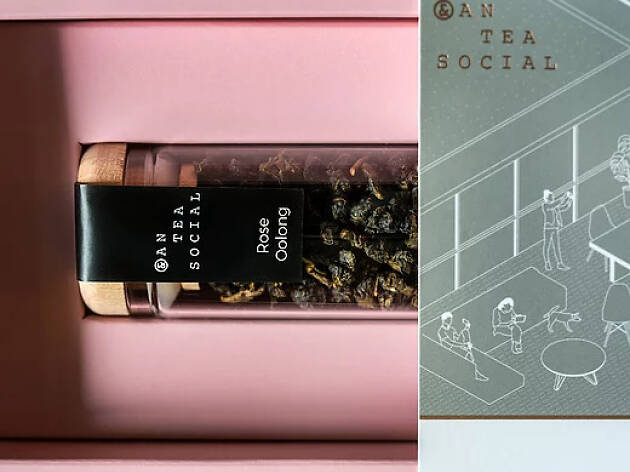 While Antea Social's range is simple – it mostly offers flavoured oolong teas – it takes great care in making sure each batch is perfect. The tea leaves are sourced directly from the producer whenever possible and baked with essential oils for 12 hours. The tea leaves and oils then remain in the oven for up to a week, but this time-consuming process produces a batch of tea that can be re-steeped multiple times without losing flavour. Currently, the oolong range includes flavours like rose, vanilla, mint, peach and more ($10 each). The leaves come packed in an airtight glass bottle that's perfect for gifting or admiring as it sits pretty in your pantry. Look out for its tea room that's opening soon. 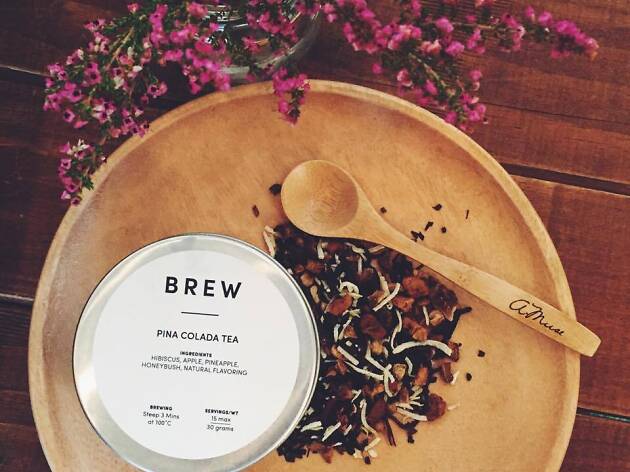 This homegrown brand by Angela Phua first came to prominence with the artisanal food movement that swept through local pantries and stocks a 40-strong inventory of single-estate and blended teas in gorgeous packaging. Phua has made it possible to pick up prime Fujian Silver Needle ($11-$29), organic Gyokuro ($11-$29) and Taiwanese Formosa Oriental Beauty ($10-$26) in sampler sizes, but her wine-inspired blends make living through dry months easier to bear. Plus, the kitchen swag hoarders in us can't resist A.Muse Projects' branded tea hook infusers ($18) and wood-lidded, double-walled glass bottles ($42.90) for on-the-go drinking. 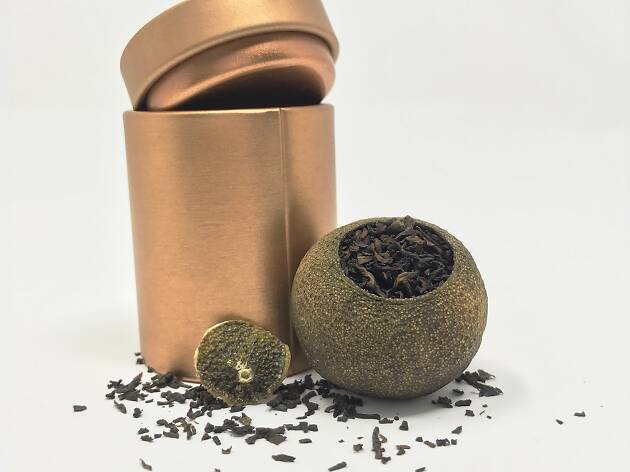 Infusion-de-vie's speciality is organic teas. Its tea leaves are sourced from organic farms, mixed with herbal ingredients, and free from all additives. Popular blends include the honeysuckle, red date and snow fungus ($24) and the sencha and golden osmanthus ($24). The standout product at Infusion-de-vie, however, is definitely the premium raw green chenpi Puer, aged 5 years ($8). The raw green chenpi (mandarin peel) is harvested from Xinhui, famous for its special breed of trees that cannot be found anywhere else. The trees date back to the Song dynasty, and the peel is aged for 5 years together with palace-grade puer from Yunnan. Infusion-de-vie also carries a version aged with ripe, red chenpi ($32). 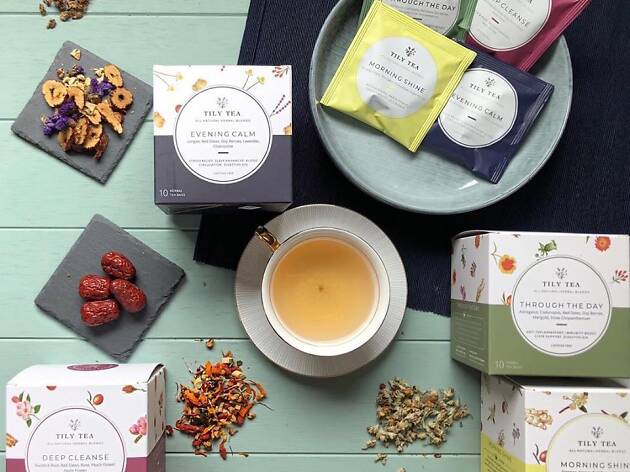 Tily's tea blends are a unique marriage of East and West. Delicate florals like chamomile, lavender, and marigold are mixed with herbal roots like ginseng, burdock and codonopsis to create a range of vegan-friendly, caffeine-free tonic teas. Their current range stocks four different blends, and each blend comes in pyramid-shaped tea bags for easy brewing ($16.90 each). Offering an alternative to coffee, the Morning Shine is made with a blend of ginseng and ginger root, and naturally sweetened with red dates. Their website also stocks stainless steel tumblers ($29) and a teapot and ceramic warmer set ($48) for all your home-brewing needs. tilytea.com 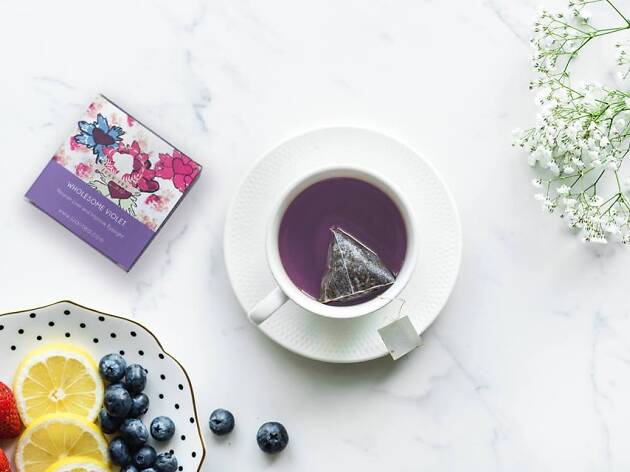 Juan Tea derives its name from Madame Juan, a mother of three and homemaker who was inspired to create her own blends to improve her family's health. While florals are used here as with most other tea brands, lesser-seen ingredients like the loquat leaf, monk fruit flower and black wolfberries are also incorporated. The result is a range of interesting blends like the wholesome violet ($12) – a mix of chrysanthemum, peppermint and black wolfberries, and the fruity indigo ($16), made with butterfly pea flower, pineapple, apple, roselle and rose hip. Both teas are, as their names suggest, tinted a pleasing shade of purple, and like the rest of the range, come in loose leaf and tea bag options. 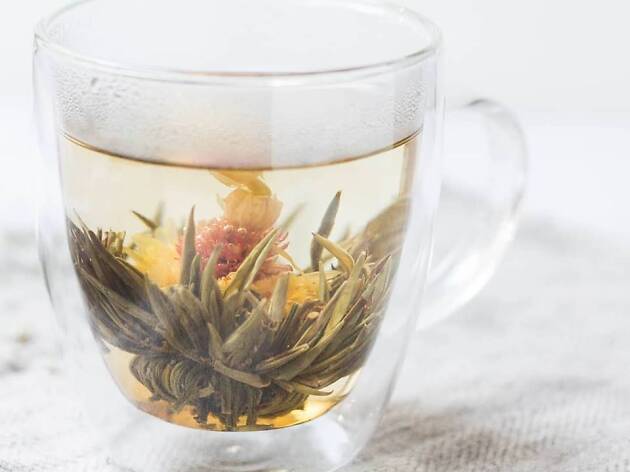 At Pétale, even the act of preparing tea is an experience. The brand has created a handsewn tea ball that blooms when submerged in hot water, making tea drinking a spectacle to be enjoyed. Each tea ball is made with organic Maofeng green tea and dried flowers that are sewn together with cotton thread. Its signature blend, Antoinette's Love, is made with gomphrena, jasmine and marigold ($28 for six tea balls). Each blend can be re-steeped up to three times. 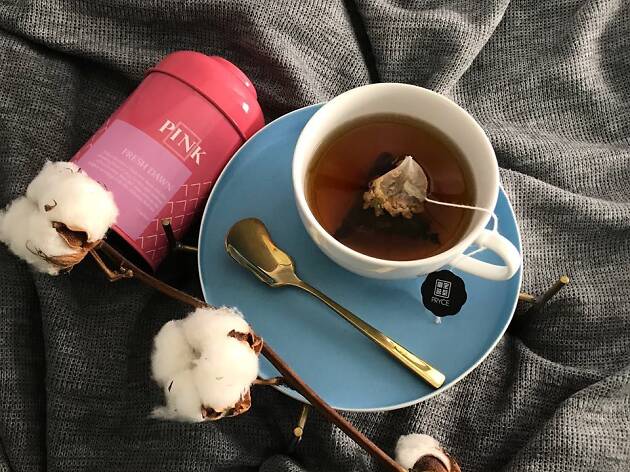 Lim Tian Peng, heir to historic homegrown tea company Lim Lam Thye – and brother of the founder of Gryphon Tea – set up this brand to throw a glam spotlight on Chinese tea while keeping it affordable. Its wood-boxed Majestic Treasures collection, at $26, packs leaves from major tea-growing regions in China, like Yunnan, Jiangsu and Anxi, as well as Nantou in Taiwan. Its Shanghai Tisanes ($15) blend is caffeine-free and great for late-night sipping. The brand also one-ups the competition by earning a Good Taste badge from the UK for its Pandan Chiffon, Singapore Sling, Straits Spice and Vanda Miss Joaquim (all $20) blends. Pryce's tea blends are available at selected Fairprice Finest and Fairprice X'tra outlets around the island. 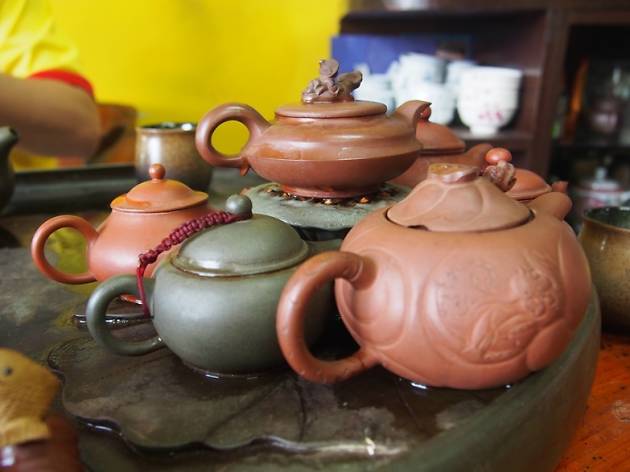 As one of Singapore’s oldest tea merchants, Pek Sin Choon has survived multiple redevelopments, relocations and even a war since its establishment in 1925. The brand now supplies its tea leaves to almost 80 percent of all bak kut teh shops in Singapore as well as some Chinese restaurants, most notably Din Tai Fung. Helmed by fourth-generation owner Kenry Peh, the tea shop maintains many traditional practices. Every day, up to 120 kilograms of tea leaves are blended and roasted with a woven basket and made-in-Singapore oven, the former of which is as old as the brand itself. The women of the family will then perch around a table, wrapping tea leaves in pink paper used by Chinese medical halls – one pack at a time, like how it was done in the past. Sometimes, if you’re lucky (and curious), Peh, who’s quite the storyteller, will be around to impart his knowledge about the local tea culture while you sip on freshly brewed tea. You’d think that only the older generation will stop by, but the 47-year-old says he’s seeing more young folks pick up the habit after learning about the health benefits of tea. The most famous of Pek Sin Choon’s offerings is Unknown Fragrance ($52.50/tin), a top-secret blend of oolong tea varietals. Quality is of utmost importance to the store; all its tea comprises full leaves, even the affordable White Fur Monkey tea ($8/tin), which is also used in religious rituals. 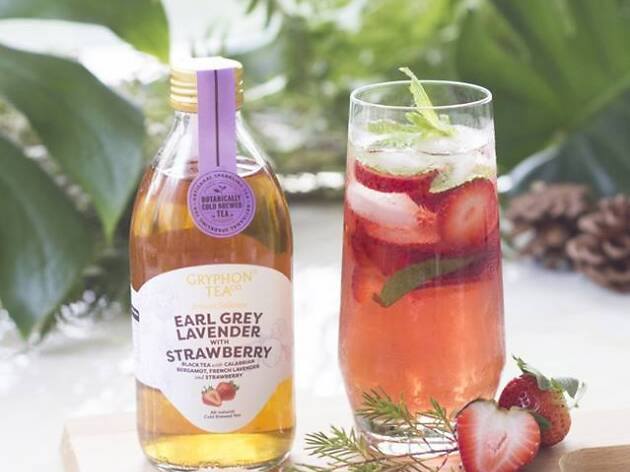 Gryphon Tea's founder, Lim Tian Wei, founded the brand in 2006, but his roots can be traced back to a local, family-owned tea importer that began its business a hundred years ago. The brand's products are wide-ranging, from herbal and fruit tisanes to tea lattes and coconut jams. In 2017, Gryphon created a range of sparkling teas that quickly became one of its best-selling products, setting it apart from other brands. The sparkling teas are cold brewed for 12 hours, sweetened with fruit juices, then carbonated and stored in glass bottles. Currently, three flavours are available: Osmanthus sencha with passionfruit, Earl Grey lavender with strawberry, and Pearl of the Orient with lychee ($55.20 for 12 bottles). The sparkling teas are also retailed in individual bottles at select supermarkets around the island. 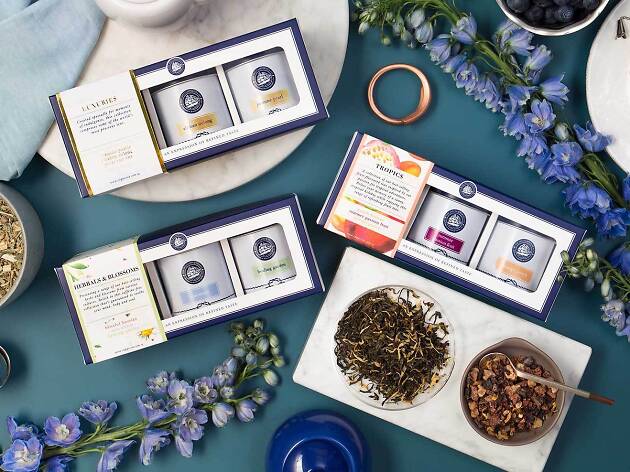 Homegrown brand The 1872 Clipper Tea Co mints a presence in the shopping belt with a flagship store in ION. At its tea bar, sample teas from the essential English breakfast to the unique Yunnan silver tips ($4.50-$6.50), and have some tea-infused pastries and desserts while you're at it. Signature drinks include the cold-brew black tea with apple slices and cinnamon syrup ($6.50) and tea latte sweetened with gula melaka ($6.50). Its pastry case displays treats like colourful tea puffs ($3.20 each), soft chiffon cakes ($6.80 each) and the requisite scones ($6 for 2). If you're a tea aficionado, check out the Alpha Dominche Steampunk machine, which claims to brew a perfect cup of tea every time. 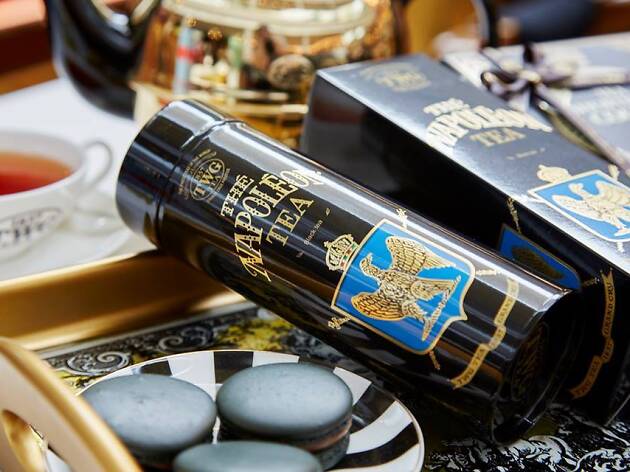 How could we not have them on the list? The luxury tea brand may have a global presence but it all started in Singapore in 2008. With a huge collection of over 1,000 single-estate, fine harvest teas and exclusive blends (new flavours get added every year), it's clear that the people behind TWG are clearly passionate and innovative when it comes to tea. While at it, the brand is also known for its tea pâtisseries, tea-infused delicacies and other tea-making paraphernalia.

Quench your thirst at these other places 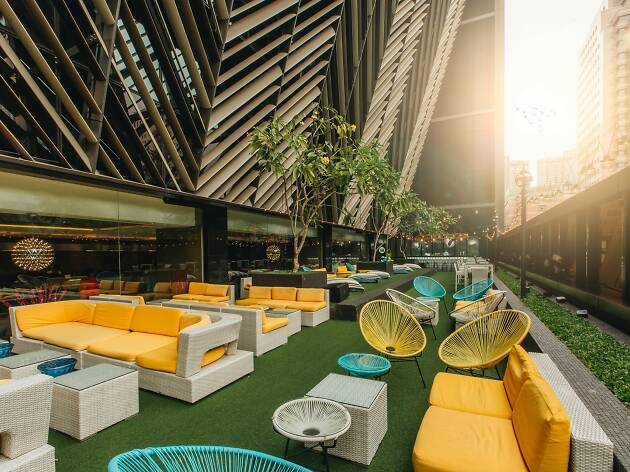 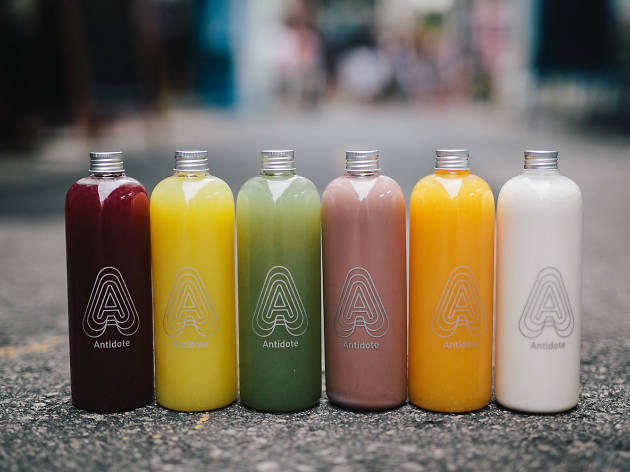 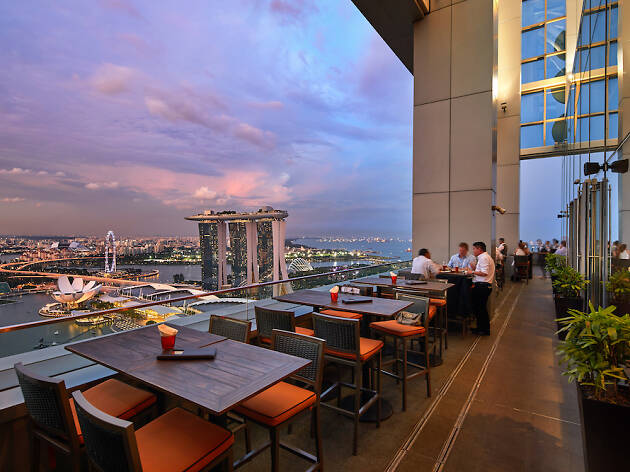