You gotta have faith: Paul Mac resurrects Saint George for the stage

The personal, public and political true story is realised through song at Sydney Festival

A story about a very gay mural and the power of people, at their ugliest and most wonderful, is coming home to Sydney for the all-homegrown line-up of Sydney Festival 2021. The Rise and Fall of Saint George first appeared on stage for Sydney Mardi Gras in 2019 in its workshopping stage, before heading to Melbourne for Midsumma. However, the story has been living in a community's subconscious since before then.

For just shy of a year, anyone taking the Erskineville train line through Newtown would catch a winking glance from a saintly George Michael. The English pop star and gay heartthrob was depicted in a mural on the side of a residential house wearing a rainbow stole, ringed by a halo, a joint in one hand, a cheeky bottle of amyl in the other. Musicians and electronic pop forefathers Paul Mac and Jonny Seymour commissioned street artist Scott Marsh to create the work on the side of their home as a tribute to George, a personal friend, after his untimely passing in 2016.

This whimsical and irreverent work of public art became a local landmark and an eye-popping surprise for passers-by. However, shortly after the nation said ‘Yes’ to the postal plebiscite on marriage equality, it was destroyed by a young man claiming that he was defending his religion. Spurred on by an extremist Christian Facebook group, attackers continued targeting the house for days, in what Mac looks back on as a “terrifying time”.

The community support that rallied around his home and the destroyed tribute to his mate was nothing short of inspiring to Mac, and motivated by this, the producer turned his skills to creating a body of work like nothing he’d ever attempted before. He collaborated with playwright Lachlan Philpott to create a modern song cycle, an electro opera of sorts, telling the story of what happened to the mural and the wider context of the battle of morals happening in Australia at the time, that continues to this day.

Directed for Sydney Festival by Kate Champion and produced by Performing Lines, The Rise and Fall of Saint George is performed with a spectacular live chorus and seven soloists with whom Mac developed the songs: future soul singer-songwriter Ngaiire, pop prince Brendan Maclean, hip-hop personality Joyride, cabaret gem Andrew Bukenya, brooding electronica artist Handsome, operatic soprano Jacqueline Dark (whom Mac just had to work with after seeing her turn as Mother Superior in The Sound of Music), and Marcus Whale, a musician and performer who is no stranger to exploring the camp theatricality of Christian liturgy and mythology. The show also draws on recordings of speeches given on the marriage equality debate from the likes of Magda Suzbanski, Jenny Leong and Tony Abbott, as well as a confrontation with the vandals caught defacing Saint George. 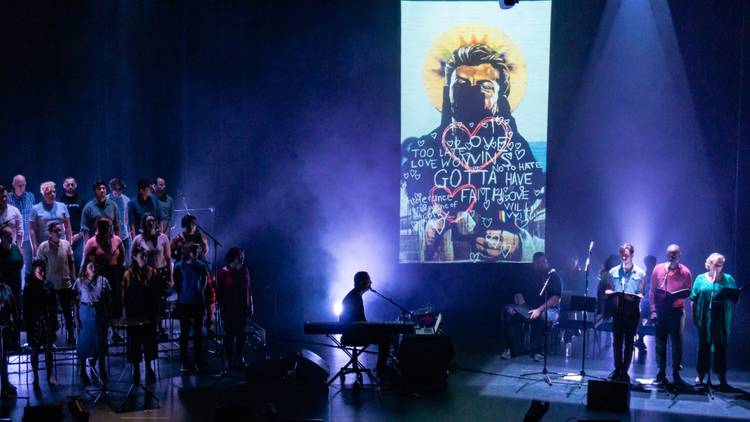 “I think it means a lot to the queer community in that it was such a shitty time living through that. A lot of people felt attacked and unsafe, and vilified. And I think this story just hit on one part of that whole experience,” Mac says.

When the opportunity arose to stage it for Sydney Festival – Saint George’s first appearance outside of a LGBTQI+ focused event – Mac debated whether it was even a good idea to bring back this story after the year we’ve had.

“[Saint George serves] to document that struggle, so we don't forget it, and to celebrate the people that were active in supporting the rights of queer people.”

His decision was also solidified by a chance opportunity, when a friend had a spare ticket to see the Australian Chamber Orchestra play at City Recital Hall, one of the first post-lockdown music events to take place in Sydney. “Within about two bars, I was crying. It was just so beautiful to have a bunch of people in a room sharing live music together, and it made me feel really joyous.” Mac realised he had the chance to bring something similarly important to the people of Sydney.

I hope it will be able to provide some joy to the city, to be honest

The contentious religious element of the work also comes into new light, with bills against conversion therapy currently moving through state parliaments around Australia, provoking a lot of opposition from conservatives. Raised Catholic, Mac was told that his queerness meant he’d “burn in Hell forever”. The tribute he had painted on his house nods to the historical outsider culture of people who reject the imposed rules of religion and society to embrace their own truth instead. “Part of me still enjoys the outsiderness of queer culture, but at the same time, I want to feel legally safe.

“To be honest, I can't see myself ever getting married. I don't really buy into it. But I do believe in the right to it. The ‘Yes’ vote was like a threshold that we needed to pass through in order to hit some kind of level of equality. So it was a really important time. And I think that's why it hit the queer community’s heart quite closely, because it meant a lot to so many people in so many different ways.”

So what of the future of the mural? Mac says he’s been talking with Marsh about what will replace it, but he can’t put himself through the stress of the potential backlash from erecting the original again – it lives on in another way. While the artwork may have sainted George Michael, the stage show cements the scriptures of a story that went from personal to political, from hateful to hopeful. Bring some tissues, and have some faith.

The Rise and Fall of Saint George comes to the Sydney Festival stage at Barangaroo Reserve in January 2021. Find out more about it here and see our festival guide here.

What else to see at Syd Fest? 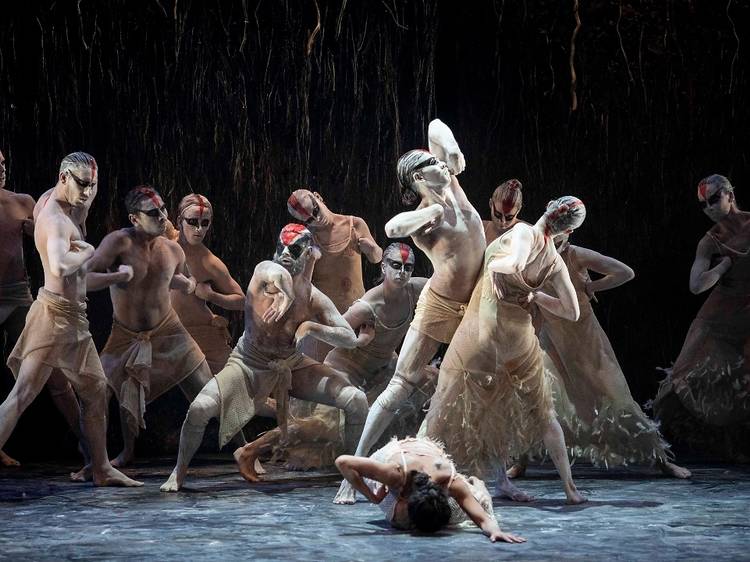 Just some of the highlights of what’s sure to be an incredible festival this summer.