21 things we miss in Sydney

Time Out has celebrated our 11th birthday in Sydney (in London we’re a ripe old 50), and in over a decade of singing the praises of this amazing city, change has been the only constant. Sure, some things have remained the same (Pancakes on the Rocks is still doing those 2am stacks), but a whole lot has changed in a pretty short span of time. We’ve seen a lot of things come and go, but these are the things we miss most.

1. Goodgod Small Club (2010-2015)
It looked like a party bar from the Flintstones, the drinks were brightly coloured, there were hot dogs on the menu, and out the back the band room hosted some of the most varied and exciting parties in Sydney. It’s where you’d go for some late night Dutty Dancing, a Beyoncé dance class, quality pop culture trivia and unforgettable live gigs.

2. Q Bar (1993-2015)
The giant Exchange Hotel venue sprawled along Oxford Street, with Spectrum, Nevada, 34B, and Q Bar all providing a perch for every kind of night owl that existed. But it’s the raging nights at Q Bar we miss the most.

3. The Monorail (1988-2013)
Look, it might not have been the most practical form of transport, but we miss the quiet train looping above the city like a silver snake constantly chasing its own tail from Darling Harbour up to the CBD and back again.

4. Purple Sneakers at the Abercrombie Hotel (2006-2010)
The party that united indie kids across the city, when Bloc Party and Interpol were on high rotation and Jägerbombs were the order of the day. That sticky carpet and amazing beer garden are part of our mythology now.

5. $5 steaks at the Lansdowne (1926-2015)
The new Lansdowne is better in every single way, but there was something comforting about the fact that the cash poor could always up their iron stores for a fiver, and only about one in four steaks were pure gristle.

6. Betty's soup kitchen (1990-2011)
The vintage-styled dining room on Oxford Street was a mainstay for cut-price dining in the rainbow district. For less than $10 you got a hearty soup, but it was the community living room vibes people stayed for.

7. The Annandale Band Room (1980s-2014)
It was one of the truly great rock’n’roll band rooms. Australian music royalty like Tim Rogers, the Drones, Front End Loader, Regurgitator, Dandy Warholes, the Living End, You Am I, Shihad, Spiderbait, and Jezabels have all graced the stage.

8. Wonderland (1985-2004)
Did you go straight for the Bush Beast roller coaster? Or were you all about getting soaked on the Snowy River Rampage? The HMAS Endeavour was the best way to bring up all the fairy floss you’d eaten, but for thrills nothing beat the Space Probe, which would count down but drop you at random. Amazing.

9. 50s Fair at Rose Seidler House (1995-2016)
It was like a portal back in time, when skirts were circular, jewellery was bakelite and your hair wasn't neat unless it shined with pomade like buffed glass. Every year all the retro fiends in Sydney would head into the leafy North Shore enclave of Wahroonga to dance up a storm, shop vintage threads and pretend they were in their own version of Happy Days. Fun didn't get much more wholesome than the 50s Fair.

10. Mag Nation (2009-2014)
Remember when you looked forward to the release of a new issue from your favourite niche print product? This magazine shop next to the Marlborough Hotel was a place where all interests were catered to, especially if it meant airfreighting in something from the US or Europe. It was a cave of knowledge and discovery.

11. The Old Clare (1939-2013)
The story goes that sometime in the 2000s, the Old Clare was renovated and everyone stopped going there, so they bought back the sagging couches, the cracked tiles and ricketty bar stools for a few more good years of Brit Pop parties before the whole Carlton Brewery site was redeveloped.

12. Dean’s Café (1976-2011)
It was a fusty licensed café in the Cross that served you chocolate thickshakes while you sat back in antique chairs. It was also a great Oasis for when the dancing spirit wasn’t with you.

13. The Hopetoun Hotel (1839-2009)
You probably had never heard of any of the bands on the line-ups, but this Surry Hills pub was always the best bet for a night of cheap live music, and later you’d inevitably be able to say “I saw them when they were still playing the Hoey”.

14. Lan Franchi's (2002-2007)
It was a warehouse named for a notorious murder in the alley behind it, and inside you’d find a mind-bending series of exhibitions, parties, screenings and meetings run by artists.

15. Homebake (1996-2011)
This festival of homegrown talent was always the cheaper alternative to Big Day Out, and was a killer time down in the Domain. Other hat tips go to Good Vibrations, V Fest, Harvest Festival, Peats Ridge, Playground Weekender, Future Music, Big Day Out, Come Together.

17. Sydney Festival First Night (2008-2013)
It was a short-lived but beautiful time when Sydney exploded with summer festival spirit to such a great degree that they ran a festival within a festival, with their First Night extravaganza. This was a time when you could see Brian Wilson, Paul Kelly and Spank Rock in the same night as long as you possessed the determination to negotiate your way through the crowds.

18. The Basement (1973-2018)
Our mums used to love the Basement, both because you could sit down as long as you booked the dinner tables, but also because it championed a softer, more international line-up that often starred talented singer songwriters, cabaret stars, acoustic performers and virtuoso instrumentalists. 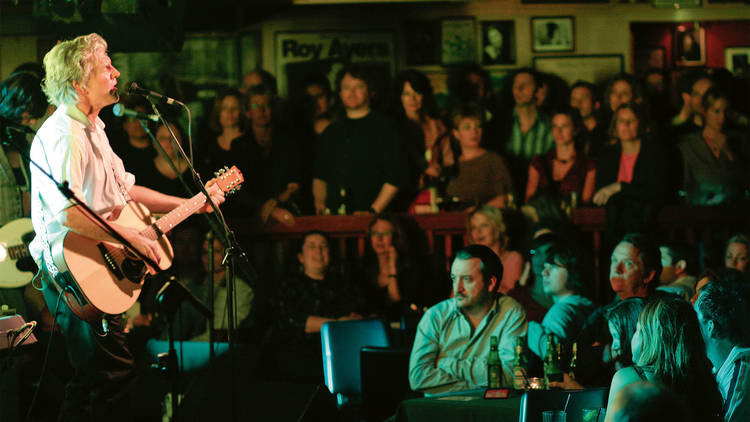 19. Serial Space (2007-2012)
Before Central Park was a blooming monolith it was an empty lot for yonkers. Tucked up Wellington Street alongside this was an unassuming warehouse space that hosted some of the most interesting experimental art and performance in Sydney. Run by a small (and largely residential) board, Serial Space hosted lively debates, robot wars, hedonistic raves, quiet and weird live music, memorable bodily performances, and so much more.

20. Titanic - The Experience at Fox Studios (1999-2001)
You had to be quick to catch this extravagant walk-through exhibition at Fox Studios. You could choose to be a first class passenger (and live) or be in steerage (and die), and the experience was designed to show you what it was like to be an extra in the film. Walls buckled, pianos rolled across the room, and water gushed in the portholes. First class passengers were taken out holes in the hull to life rafts adrift on real water in a super chilled room. Steerage passengers ended their journey in the fiery depths of the boiler room (we were only ten but knew this ain't where the lifeboats are kept), and after a grimey boiler-man ran around the crowd twiddling some knobs yelling the lights suddenly go off. "You're now dead," he said before doors split open and a hologram of the necklace drifted down through an aquarium, followed by being shuffled on to a staircase for a photo.

21. The Square (2011-2014)
The little music venue was so brazenly out of place next to the escalators to a Chinatown sticker-booth food court area and adjacent to a Harry’s Café de Wheels it hurt. It hurt real good in the way only hidden punk venues with an unchecked sense of wildness can. The tiny room and even tinier stage meant shows often turned in to one giant mosh, a notorious Low Life show ended in literal tatters when punters started ripping the place apart. Those were the days.

On the plus side, here are 18 tourist attractions that don't suck.