How the Giant Dwarf Theatre was reborn during lockdown

When the Giant Dwarf Theatre announced in February that it was being forced from its home of six years in Redfern, a pang of grief rippled across Sydney’s arts community and the city's live show-loving punters. In just six years, the venue at 199 Cleveland Street had become one of our city's most trusted comedy and music institutions.

While the Dwarf’s founders, Nikita Agzarian and The Chaser’s Julian Morrow, promised that the legacy would continue after a rent hike made their previous location unviable, nothing is ever certain in Sydney or indeed, in 2020. To much excitement and relief, a new home for the Dwarf was announced early in March, just a few minutes up the road towards the Surry Hills end of Cleveland Street.

The grand opening of the new Giant Dwarf was postponed, however, with official government lockdowns being confirmed just a day before the first event was due to kick things off on March 20. The doors opened for real at the start of July and the team has wasted no time pumping out physically distanced shows covering broad strokes from comedy to music, storytelling nights, burlesque, drag king showcases and more. We caught up with the dream team behind the scenes – managing director Bec Annetts, program producer Moira Kennedy, and producer Jess Gordon – to find out how they’ve managed to rebirth a beloved venue and creative development hub in trying times. 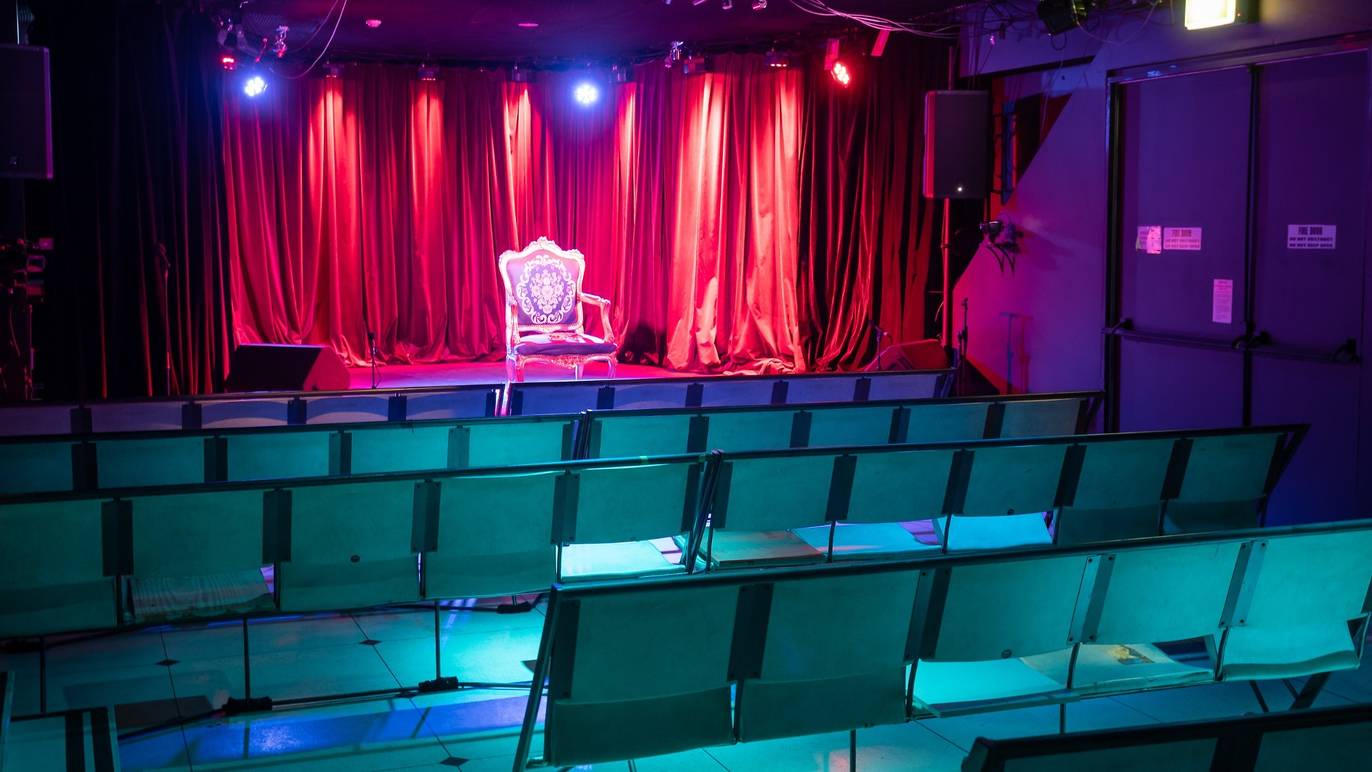 “We're settling in well. It's been great to see the encouragement from our audiences in our first few weeks. People have been really excited and kind,” says Moira. “We're really enjoying all of our shows at the moment, so we're just wanting to share them with more people. That's why we've now got a killer livestream setup; four cameras, switches and fades. Definitely very handy to have a crew with TV skills.”

At the new digs, they’ve essentially poured the essence of the Giant Dwarf into a comedy club-style setting, transferring those red velvet curtains and vintage furnishings to carry through some of that rough-around-the-edges art deco feel. Aesthetics aside, they’re hanging on to the other elements that have made them popular – including accessible ticket prices and putting diverse talents on the stage.

280 Cleveland Street has had some rich former lives. Most recently it was jazz bar Venue 505, and at one time it was a strip club. At the moment the new Dwarf is averaging three shows a week, each with double sessions to make the most of capacity restrictions. The venue, which has a capacity of 160 compared to the previous venue’s 290, is operating at a third of that right now. In August the program is due to kick up a notch, with old favourites coming back like Ben Jenkins and Zoë Norton Lodge's podcasted storytelling night Story Club, Maeve Marsden's popular queer counterpart Queerstories, improv shows, and new hits like Giant Comedy, The Kings: A Night of Drag, Two Queers Walk into a Bar, and The Burlesk of the Bizarre.

“It’s incredible to get bums in seats again, it’s a really nice venue to run,” says Bec. While the former venue was charming, it was makeshift. Although smaller, the new place has perks like a properly set up bar with a cool room and nicer bathrooms (with plans to make them even nicer). Some grand plans for 280 Cleveland have been delayed due to current restrictions and uncertainties. For now they’re just happy to be open, but down the line, there’ll be renovations, tech improvements, a food partner to take over the dormant kitchen (with some antipasto style nibbles coming soon), and cocktails and more non-alcoholic drinks available at the bar. Plans have also been drawn up and a grant received to make the space fully accessible for wheelchair users and people with limited mobility. 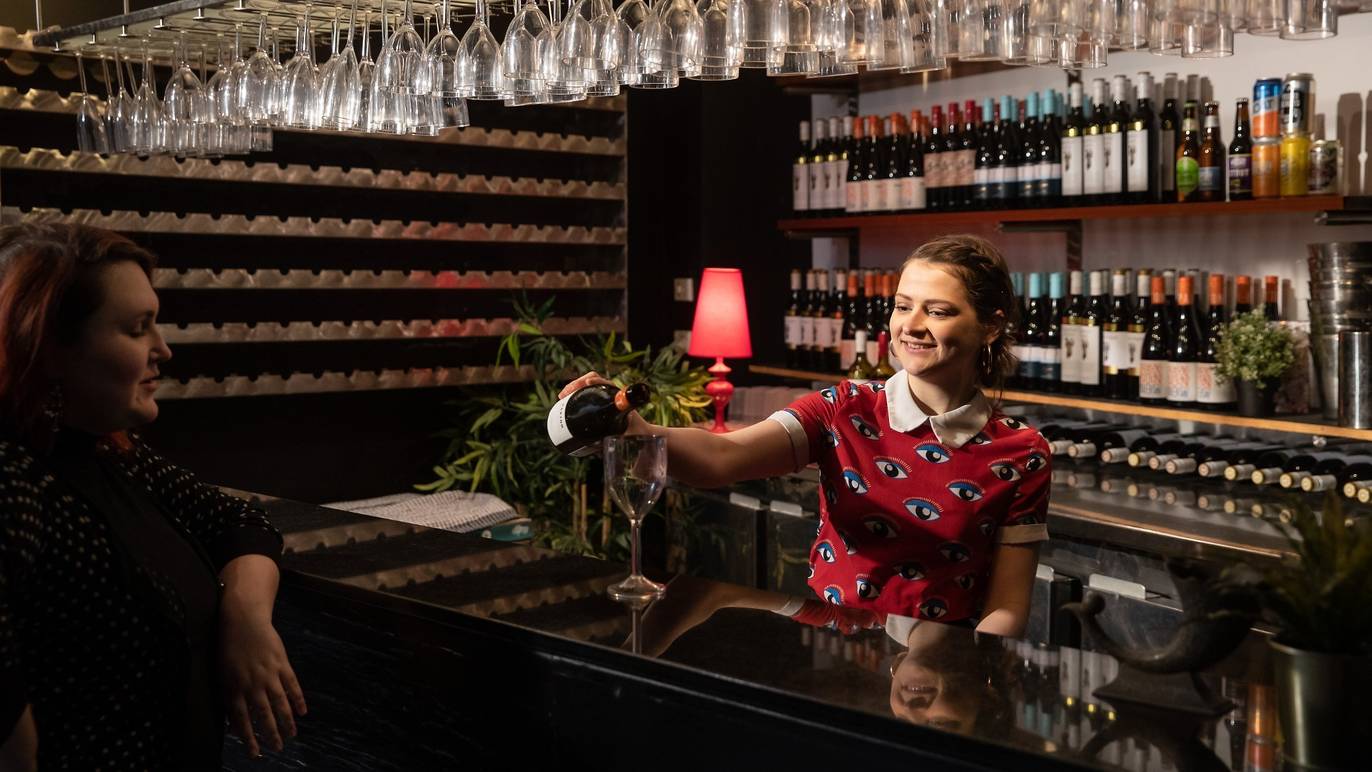 In the meantime, you can enjoy a downsized yet fairly classic Giant Dwarf experience under the current rules. The venue is registered as CovidSafe, with precautions including all staff wearing masks, temperature checks at the door, all surfaces being disinfected before and after shows, and cashless payments. You can grab a drink at the bar, and if your stomach's grumbling, there are a few kebab shops within spitting distance. If you’d rather stay home, many of the shows are livestreamed.

The team is taking the move as an opportunity to launch the Giant Dwarf into its “next generation” and further their work with platforming up-and-coming talent along with premium offerings. Their new, philanthropist-backed program Giant Developments is aimed at developing art from marginalised and minority groups and putting it on in the theatre. They’ve already started receiving submissions, with new works in development across different formats.

“At this point, our main hope is not to be shut down again,” Julian Morrow said in a statement provided to Time Out. “Beyond that, we want Giant Dwarf to have Sydney's most entertaining, interesting and eclectic program of events. [To be] the place you see exciting comedians and performers of all shapes and sizes before they're massive hits playing bigger venues. And the place those performers still come back to when they're famous, ‘cos they love the vibe at Giant Dwarf as much as our audiences do. But we'd also settle for solvent.”

Head to giantdwarf.com.au to see what’s coming up.