‘RuPaul’s Drag Race Down Under’ S1E4 Recap: Let them be shooketh

We’re almost halfway through the Down Under edition of the international drag reality show, and we’re reaching a point where many fans are threatening to abandon the outpost altogether. But oh darling, they might just have us hook, line and sinker with the bait dangled in front of us this week.

Plot points this episode largely circle around the tensions between New Zealand queen Elektra Shock and the tension between her and the other queens, plus her inner saboteur as she reckons with falling into the bottom two for two weeks running (and fallen into many jump-splits while winning lip syncs as a result). Scarlet Adams and Etcetera Etcetera’s comments are blunt, but not incorrect – the judges main critiques are about her taste level.

Well, just as I thought – trash

RuPaul soon joins the queens in the werkroom and is swiftly followed by the pit crew peddling in a large pink dumpster filled with rescued materials – but the promise of a rough and ready design challenge isn’t the biggest entrance this episode – none other than Art Simone emerges from the pile, and Ru announces she’ll be re-entering the competition, officially. This is huge. Art’s shock elimination in Episode 2 was a big deal for anyone who’s been referring to this season as “Art Simone’s Drag Race” ever since the cast was first leaked. One of the most prolific drag queens in Australia, she already starred in her own online series from the producers of Drag Race.

A welcome return, it can’t help but feel like lazy storytelling. Why was Art given the opportunity to come back but not the other eliminated queens, Coco Jumbo and Jojo Zaho, who were incidentally the only POC representation in the cast? Was Art’s elimination designed to be the gag of all gags all along? Again, it’s wonderful to have Art back, but a bummer we’ve gone from having an overwhelmingly white top seven, to an overwhelmingly white top eight. Maybe the disparity of the local drag scenes has something to do with that. 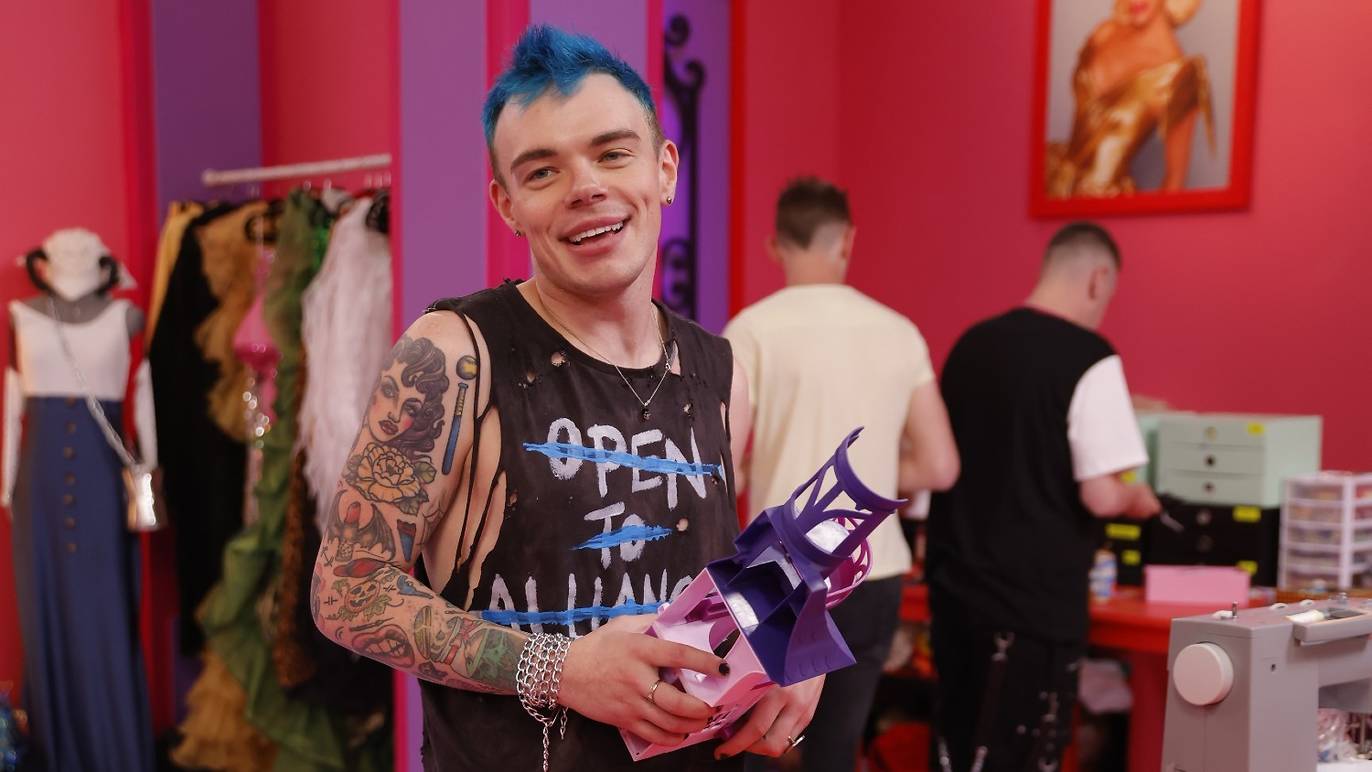 We’ve gone from a hop-scotching break-neck speed to throwing away the mini challenge altogether this week. Maybe they thought the queens getting their head around Art’s reentry was enough. This gives us a lot more time in the werkroom, and plenty of room to goss and get to know the queens better. Anita’s revelation about being a serving member of the Royal New Zealand Navy would definitely hit differently for American viewers, where ‘Don’t ask, don’t tell’ laws were only recently revoked.

The queens get into some interesting discussions about what it is like to move through the world as a drag queen, and how uncomfortable it can be when people are disappointed to meet them out of drag. Etcetera takes this one step further by talking about their experiences as a nonbinary person, and how people sometimes confuse their drag with their feminine presentation outside of performing, plus the hurtful, unsolicited opinions they receive from people uncomfortable with the ‘grey area’ of gender. Their comments give more context to the abstract nude illusion look they served in Episode 1.

Drag Race is at its best when it is used as a conduit for bringing conversations about minority experiences and big issues into people’s living rooms. Despite the welcome change of pace, the editing still feels awkward this episode. Campiness and tomfoolery are in the DNA of Drag Race, but the editors are really getting trigger happy with the sound effects.

This week’s guest judge, Elz Carrad, doesn’t bring the same star appeal you might expect, but it was a nice change to have a celeb guest judge IRL, not on Zoom. It’s also amazing to see the show platforming the star of Rurangi, a gorgeous highlight of the recent Mardi Gras Film Festival that foregrounds the trans experience.

Have your Art, and eat it too

It's always exciting to see a runway where the queens are challenged to make something completely new and not rely on pre-prepared costumes, but the mixed recyclables led to a mixed bag of outcomes.

Art Simone’s fluro pink tribute to French aristocracy is a stand out and a strong return.. Etcetera’s soft and flowy lavender number is beautiful, but even her ruched sleeve construction wasn’t a synch to save her from the bottom. The judges found her callback to 1920s art not enough of a hook, which is interesting considering that Kita’s budget ballpit look with its visible cable ties and prolific wig line saw her safe. Maxi Shield’s Vivienne Westwood inspired ‘drag bag’ look was a big middle finger to everyone who doubted her inflexible fabric choice. Scarlet ultimately wins the challenge with her pretty and “glamdiculous” plaid picnic look.

Anita and Karen must lip synch for their lives. Karen serving her backup Snatch Game character Schapelle Corby is odd, giving us little more than costume party. Ru had no idea who the drug smuggling siren of Aussie folklore even is. Maybe she was shook by Art’s return, with her biggest competition back in the room – but at least it blessed us with Ru’s confused phrasing: “Chavelle Corgi”? Anita’s “media” look constructed from books and video tapes doesn’t look as bad as the judges’ critiques would have you think. But as they say, they’ve seen the look done on the Drag Race runway before, and better.

I couldn’t help but Begin to Wonder...

Dannii Minogue’s ‘I Begin to Wonder’ marks the battle. This would have been a better fit for when the Minogue’s appeared in the previous episode, this song isn’t even memorable as a Blue Light Disco bop. But apparently it topped the club charts in the UK in 2003? (Thanks, Wikipedia.)

Photograph: Supplied/Stan | This was really the last place Schapelle expected to find herself...

A close call, no one is going quite hard enough. Anita serves a very character driven performance with interestingly grotesque face movements, highlighted by the black lippy and fantastic front bumps. Karen narrowly wins with some classical white lady moves (she’s a Karen, after all). It’s hard to see someone who slayed the Snatch Game – with an impression of Her Royal Highness so smutty it prompted censorship from the BBC, no less – leave so soon. Karen better bring it next week. Without Anita’s children’s-presenter-on-crack energy, the average bitchiness scale of the group is rising. The overall shadiness is ricocheting between being fun and being straight-up mean, and maybe it can’t all be blamed on larrikin humour. The teasers for next week indicate that we’re in for some drama, and we’ll have the popcorn ready.

RuPaul’s Drag Race Down Under streams on Stan every Saturday from 4pm AEST. Watch the show under the most fabulous circumstances at the best viewing parties in Sydney.