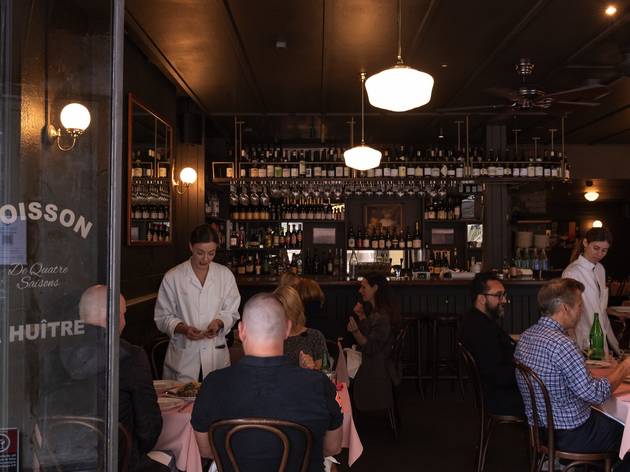 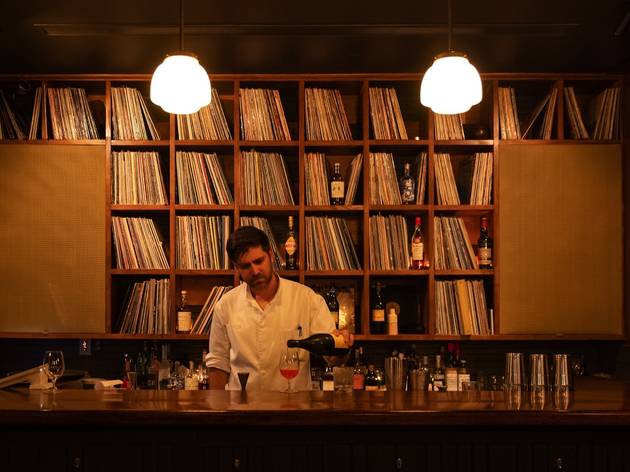 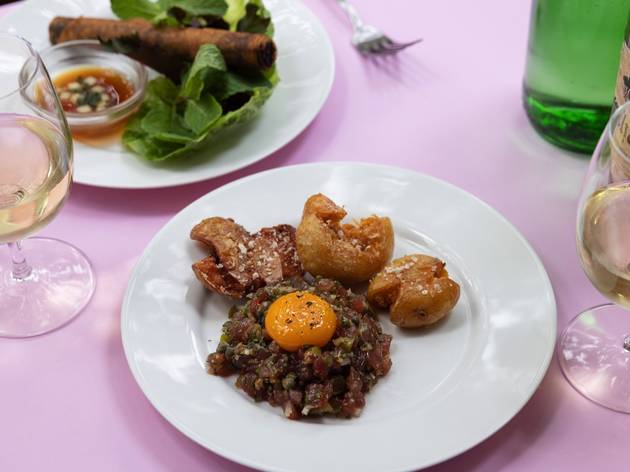 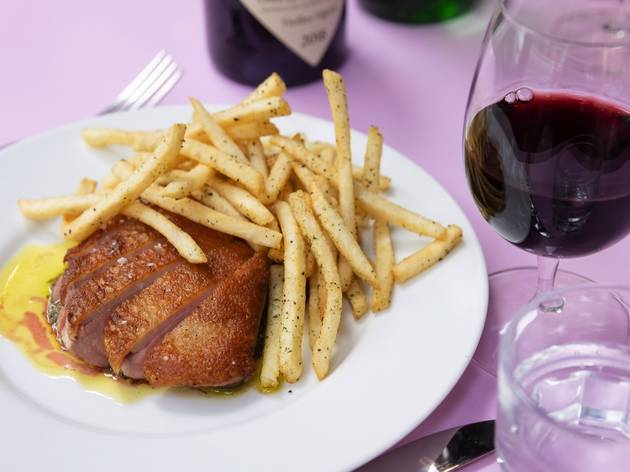 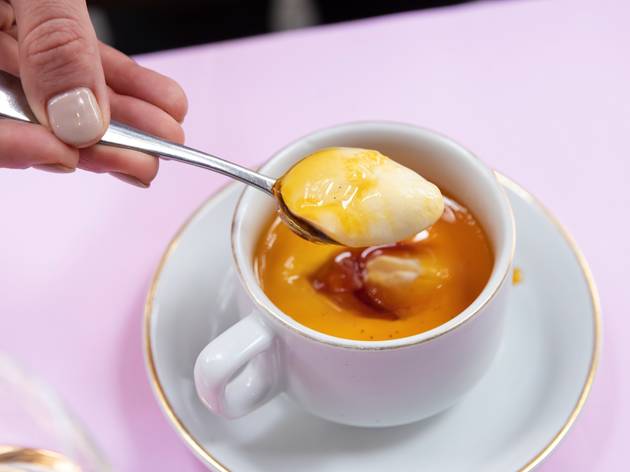 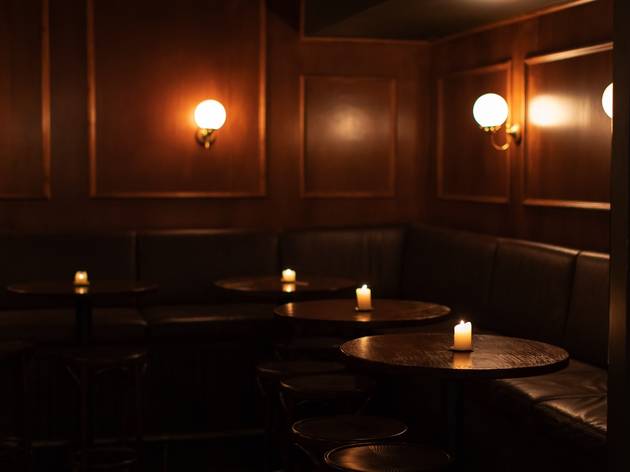 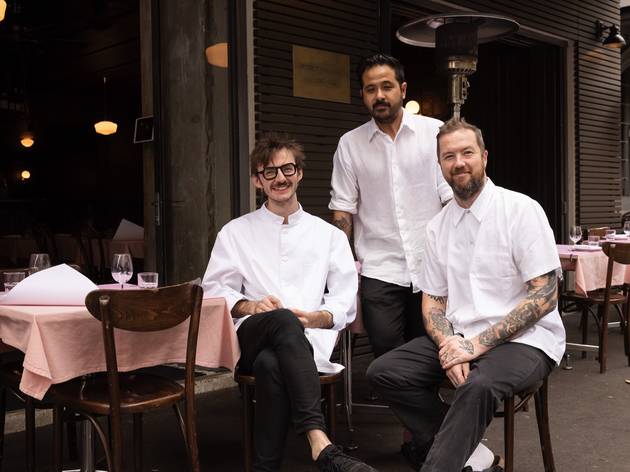 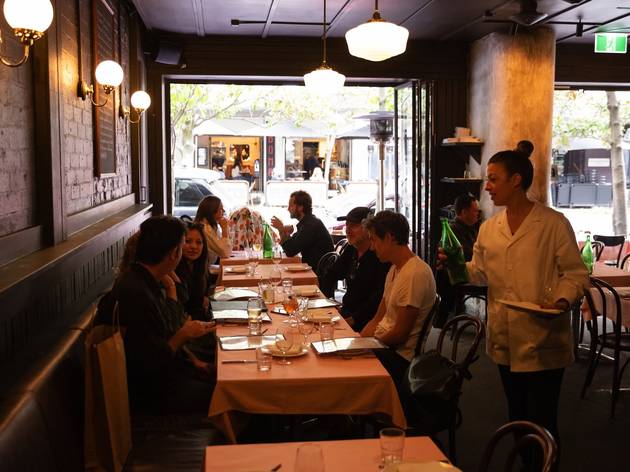 Swing by this confident crack at freshening up old-fashioned French fare, brought to you by a winning chef-and-somm tag team

You've probably had at least one 'a-ha' moment with Dan Pepperell’s cooking. The pretzel with whipped bottarga that may never leave 10 William Street’s menu, perhaps? Or was it the triumphant chicken fricassée or gutsy kimchi gratin at Restaurant Hubert? Or even that unforgettable butter-chicken-esque trippa alla Romana from his most recent stint at Alberto’s Lounge?

Odds are, you're likely to have another one at his latest venture, Bistrot 916, which opened in early 2021. Especially if you order the duck frites. It’s not the most elaborate dish you’ll ever see, but it doesn’t have to be – not when the fat underneath the dry-aged bird’s rugged skin is so carefully rendered; the breast meat itself both rosy and preposterously juicy; the just-crisp shoestring chips seasoned to a tee. Then there’s the sauce: a mustardy, herb-heavy butter emulsion with walnuts, Worcestershire and anchovies that puts the red wine jus you might have expected to shame.

This is not your everyday neighbourhood bistro. We’re talking about Potts Point here, so you'll find tablecloths the palest shade of pink, lobster frites for an eye-watering ‘market price’ and young fashionistas rubbing elbows with the local sweater-over-the-shoulders set. The former Lotus space now feels like a basement brasserie seen through the eyes of Wes Anderson (even though it's on street level), rendered eternally dark by an all-encompassing coat of black paint.

So dark, that without the faint wattage in the vintage fixtures overhead and tabletop tea lights, you wouldn’t be able to see much at all. In fact, were it a little gloomier, you might have a tough time believing that what looks like a classic tartare of beef – with a riot of minced eschallots, gherkins, capers and a radiant egg yolk – is actually yellowfin tuna. Fall-apart soft potatoes fried in beef fat join the party on the side, and the result is a bait-and-switch field day of textures and temperatures.

The tricks don’t stop there. Garlicky escargots get a punny glow-up, prised from their shells and tossed through tarragon-and-parsley-soaked shells of al dente pasta known as ‘lumache’ – or snail, in Italian. Ba dum tssss! Come dessert, a barely set custard enriched with fascinatingly complex and custardy ‘Quarts de Chaume’, an 18-year-old dessert wine from the Loire Valley, arrives in a gold-rimmed cup on its matching saucer, looking like a long black with a glossy crema in the shimmering candlelight.

Pepperell and his co-pilot, Fat Duck and Rockpool Group alum Michael Clift, manage to pack plenty of points of reference, in-jokes, winks and nudges onto the single-page carte, but fortunately things never go the way of straight-up gimmickry. A clever nod to Vietnam’s French colonial history re-contextualises the deep-fried spring roll by wrapping brittle sheets of brik pastry around soft and sweetly spiced boudin noir, providing fragrant shiso and mint leaves for you to tear and swipe through perky cider vinegar sauce. Hunks of beetroot, meanwhile, find favour alongside zesty orange cream and briny orbs of trout roe in an entrée that’s unafraid of letting a trio of big coherent flavours just do their thing.

The other cog in the polished wheel of Bistrot 916 is Andy Tyson, the powerhouse young sommelier responsible for establishing the expansive wine programs at Restaurant Hubert and Alberto’s Lounge. He understands the food and clientele well, and has enough sense to price a glass of new-wave, unoaked Bordeaux at a reasonable $15 and stick it on the same sharp and mostly French list as a $320 bottle of premier cru Chassagne-Montrachet.

He also curates an extensive vinyl collection, which is proudly on display in the immaculately styled, Tokyo-inspired record bar lurking in the very back of the restaurant. Enquire further, and he’ll tell you it consists of “mostly jazz, Afrobeat, ’70s, ’80s,” and what he calls “some inappropriate techno that may never get played.”

Given this talented triad’s track record and intelligently irreverent approach, it’s little wonder that primetime bookings are elusive. If the prospect of dinner at 5 or 9.30pm holds no appeal, it’s worth noting the full menu is served at high tables in the bar, and that popping in for a quick drink is kosher, too. And hey, while there may not be techno, there is excellent duck frites.