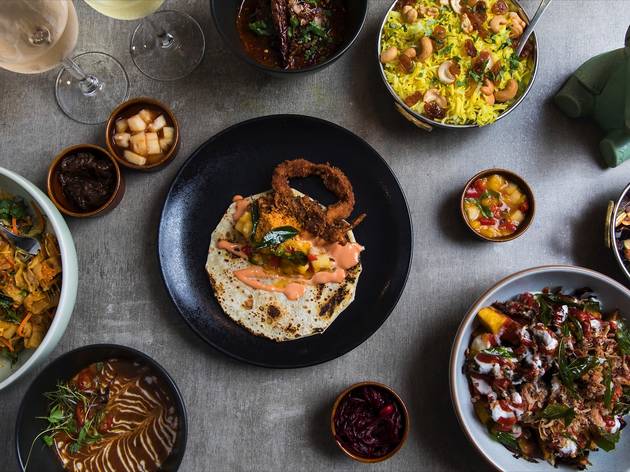 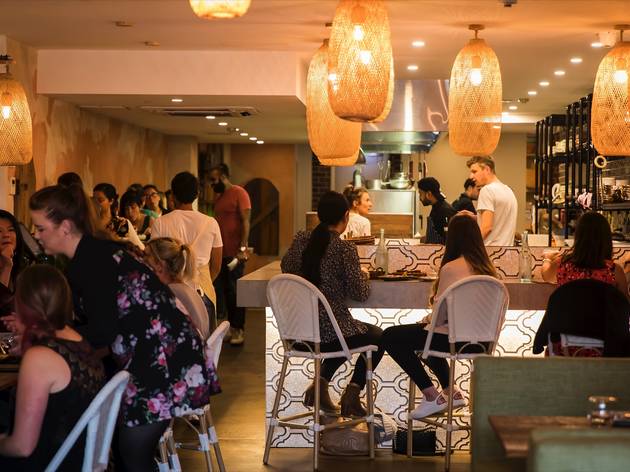 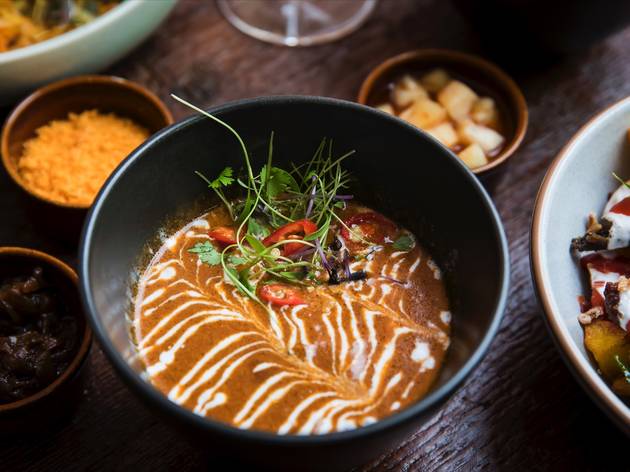 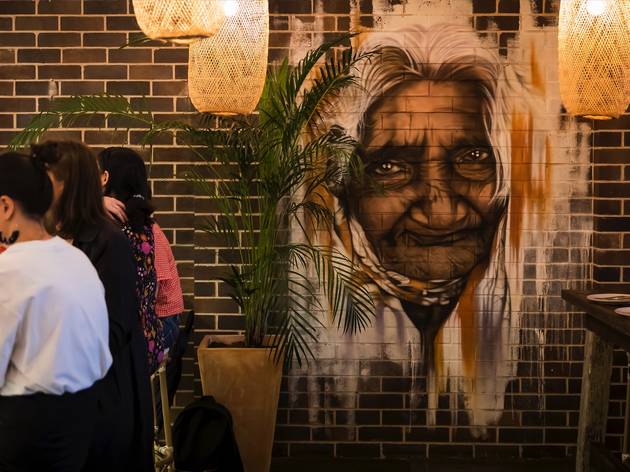 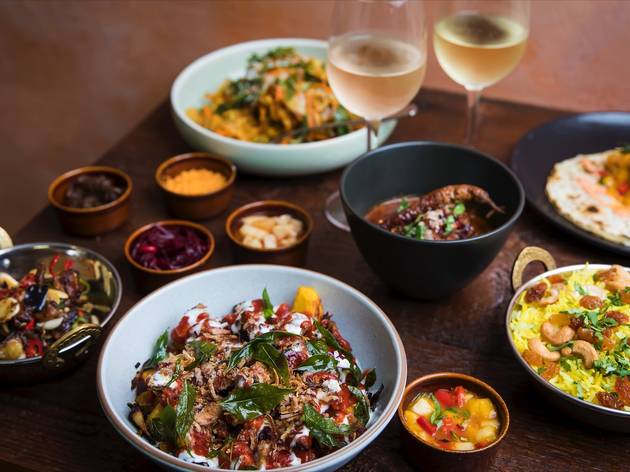 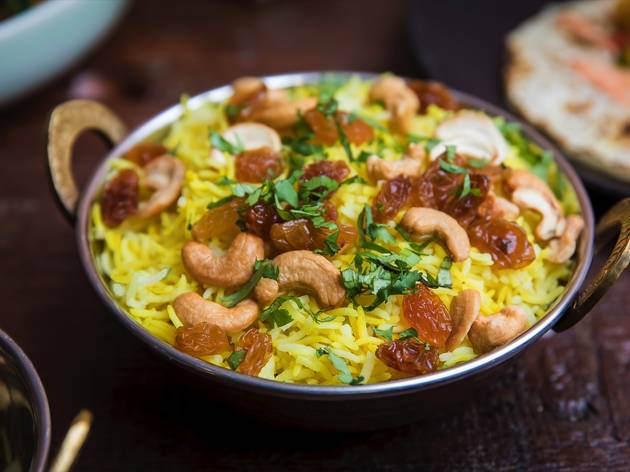 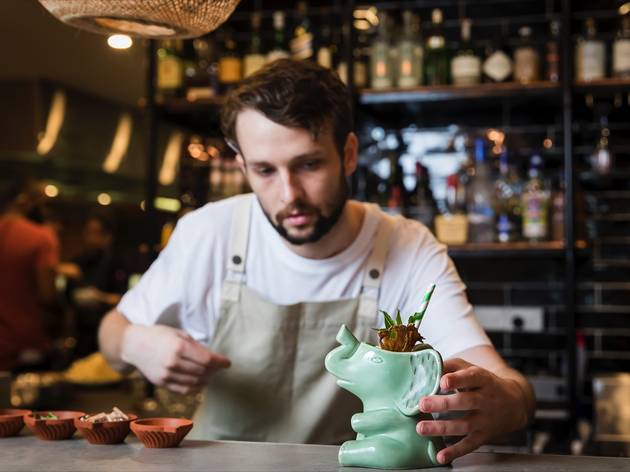 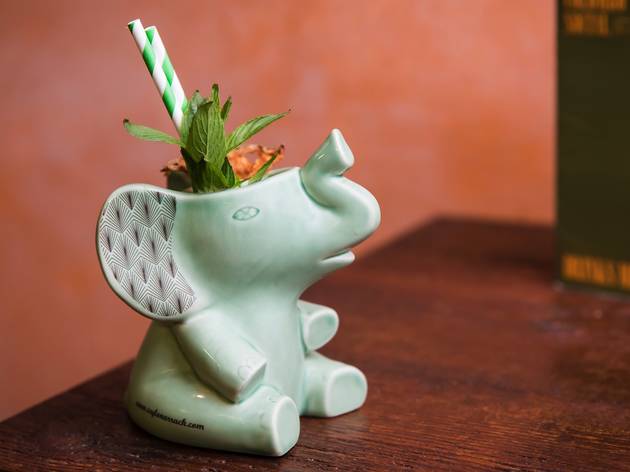 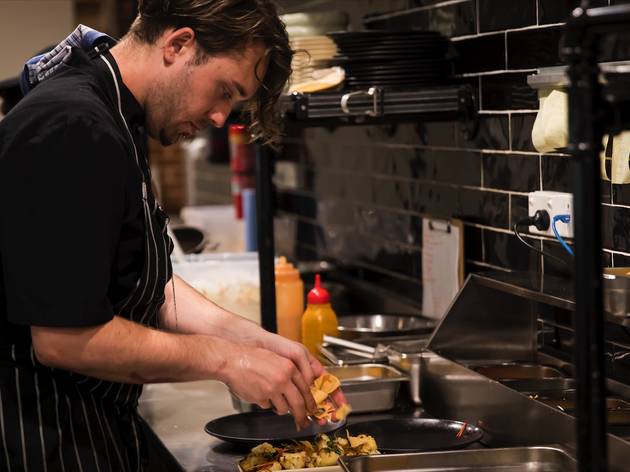 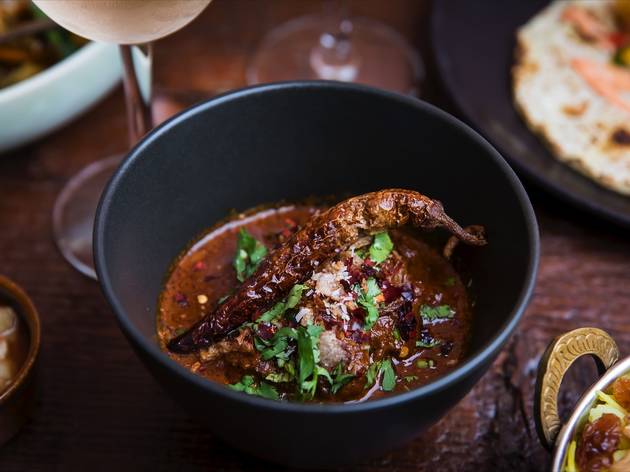 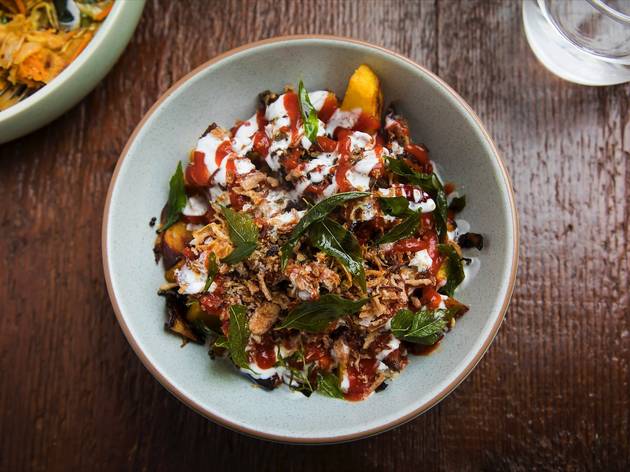 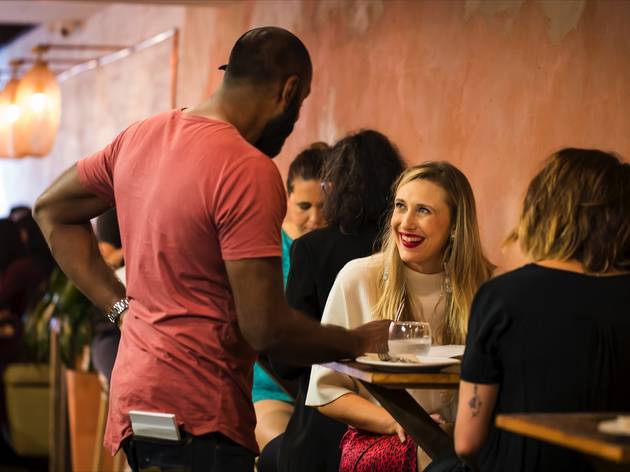 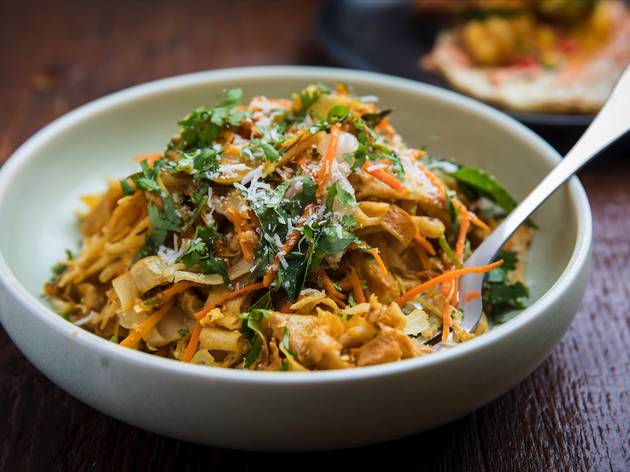 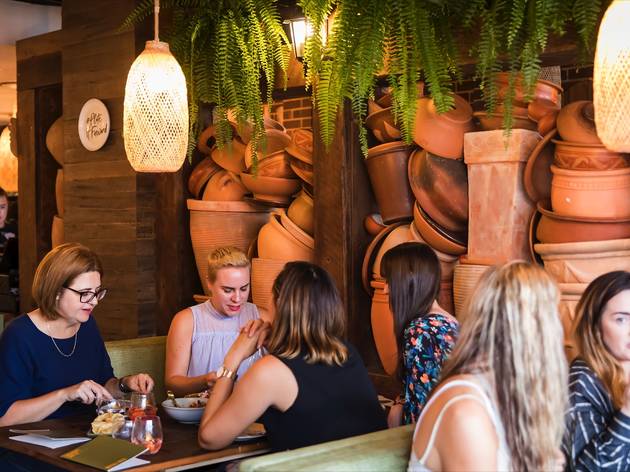 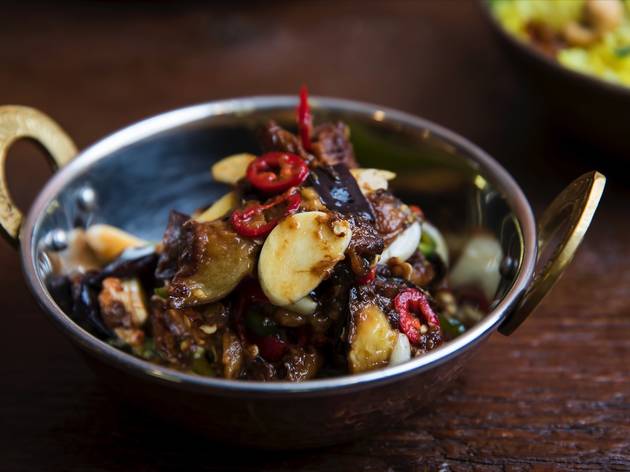 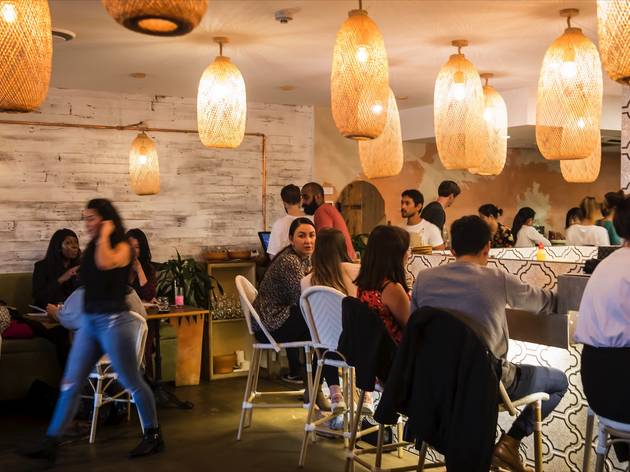 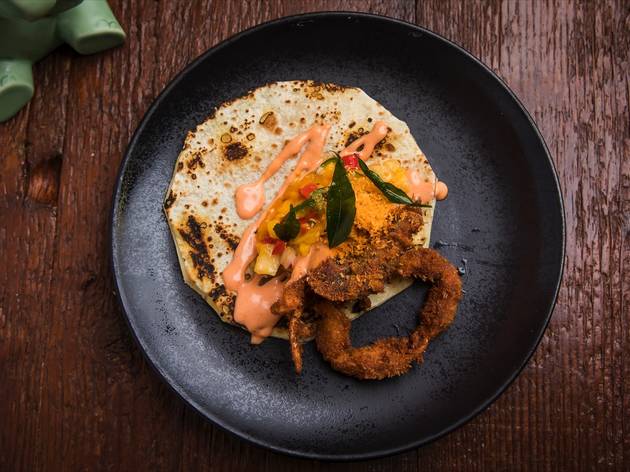 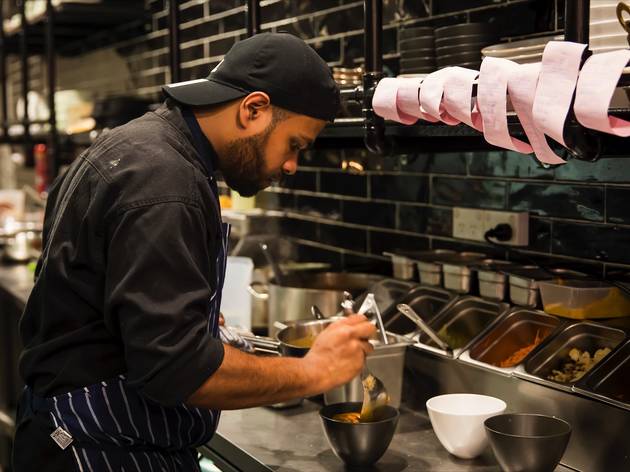 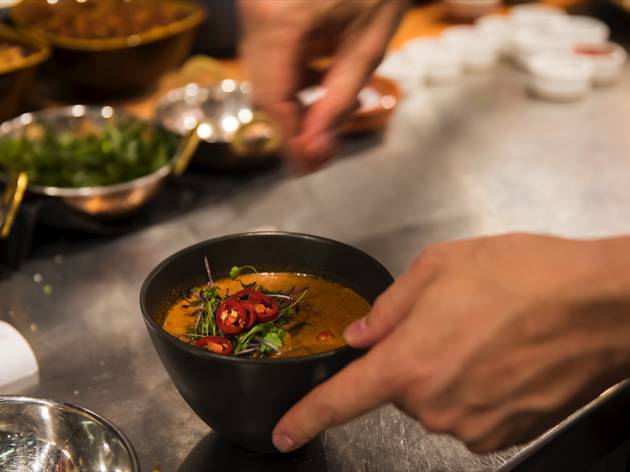 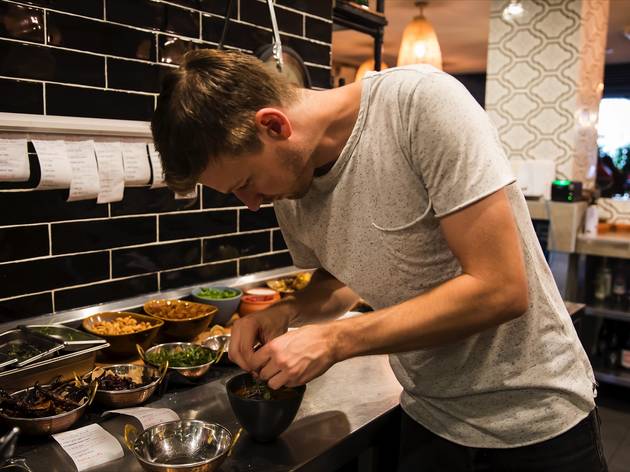 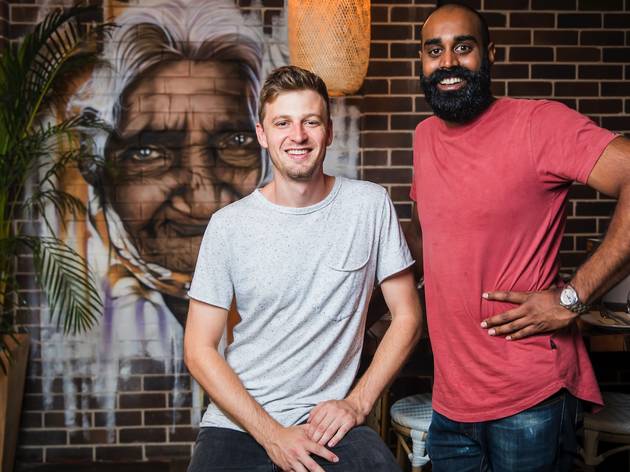 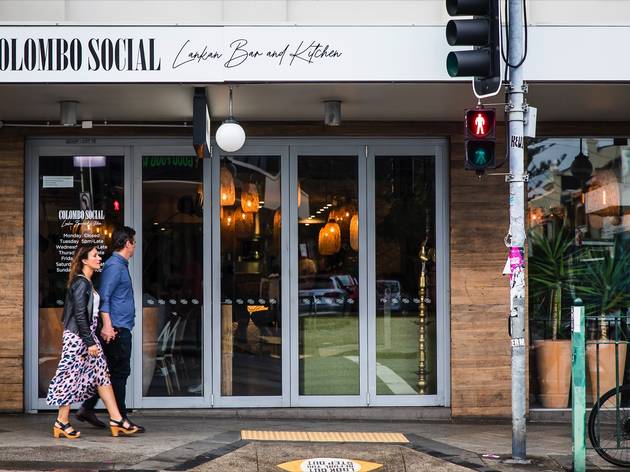 It’s easy to boil sustainable practices in restaurants down to scrapping single-use plastics and pounding pesto from leftover carrot tops – and those are important things. But what about the social, human element? What about creating an inclusive, empowering workplace that promotes personal and professional development and also contributes to the community at large?

These are big, often overlooked questions, but they’re questions that schoolmates Peter Jones-Best and Shaun Christie-David are tackling headfirst at Colombo Social, the contemporary Sri Lankan diner they opened on Enmore Road at the end of 2019. With the help of Settlement Services International and Newtown’s Asylum Seeker Centre, the duo is recruiting refugees and asylum seekers in the hope of providing stability, support and the potential for a successful future in Australia.

That might explain why almost everyone in the long, bright, buzzy room appears to be smiling. But perhaps it’s just the pervasive, heady scent of what must be a whole spice cupboard toasting slowly in a pan. Or maybe it’s the roti tacos – the first of a series of street-food snacks on the menu known as ‘short eats’, which toy with global influences without straying from the essence of Sri Lankan cooking. The stretchy, buttery flatbread not only withstands the weight of a whole deep-fried soft-shell crab better than a corn tortilla ever could, but also feels right at home in the company of diced mango, spicy mayo, crisp curry leaves and a scatter of coconutty pol sambol. A very strong start.

Colombo-born executive chef Chamara Pathiranage isn’t tied to his roots. He puts a subcontinental spin on a halal snack pack by swapping chips for devilled potatoes, shredding ultra-gamy lamb over the top, and stuffs breaded pan rolls like Gwyneth Paltrow might, with a superfood smash-up of kale, peas and sweet potato. They’re fun, snappy tweaks that aren’t too tricky, but as the portion size increases, creativity takes a back seat and gives way to classic dishes that define the island nation.

A giant bowl of kottu roti comes highly recommended, but the frantically chopped and stir-fried symphony of flaky roti, vegetables and egg loosely bound by a mild curry gravy titillates more due to texture than taste. Focus your attention on the five curries instead, which are made from Christie-David’s mother’s recipes (she, too, is Sri Lankan). They possess that unapologetic, rustic intensity so specific to memorable home cooking and give you an excuse to pile your plate with sambols (thumbs up for the sweet seeni) and hoppers – the lacy, fermented, bowl-shaped pancakes with a spongy bottom, manufactured for scooping and mopping.

Ask for the Jaffna-style goat curry, and you’ll get asked whether you like chilli. It’s more of a dare than a question; the thing’s deliriously spicy, hot enough to make you dread the thought of sharing a bed with someone on a summer night, but the meat is meltingly tender, and you won’t be able to stop eating it if you measure excitement in Scoville units. Creamy, turmeric-stained fish curry is a far milder proposition, but equally satisfying, especially when spooned over saffron-gold basmati rice with cashews and sultanas.

Colombo Social’s good conscience lingers long after the burn tapers off. Whether it’s the act of donating a meal to an asylum seeker for every Amma’s Table banquet menu sold as part of the #PlateItForward initiative, or the support of like-minded suppliers such as RAW straws, Thankyou soaps and Who Gives a Crap toilet roll – this is clearly a restaurant that cares, with a tale to tell. “This is an unbelievable way to own the story of someone who grew up in Australia with Sri Lankan parents but didn’t know where he sat,” says Christie-David. “This is my upbringing on a plate. This is as real as it gets.”