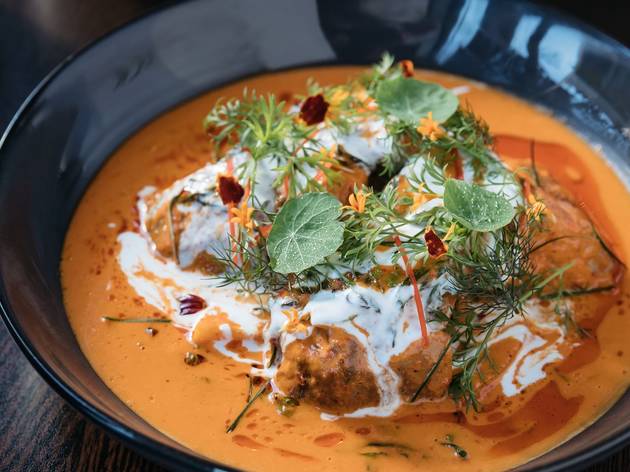 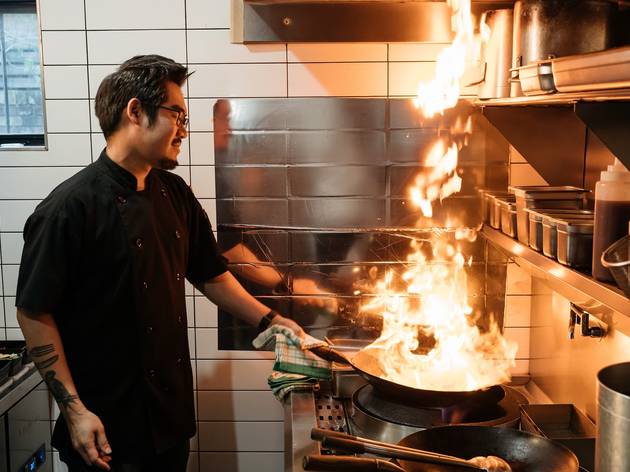 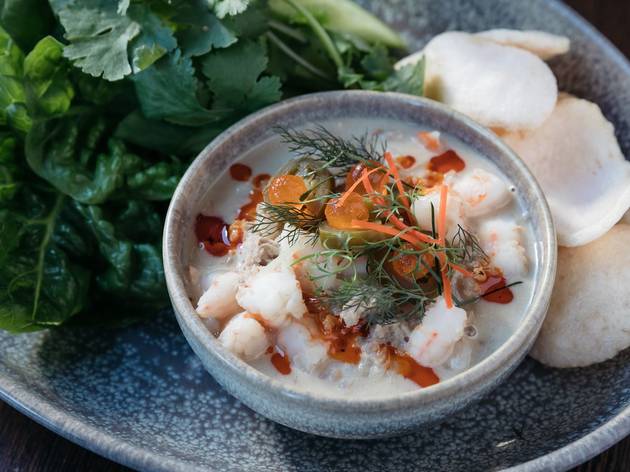 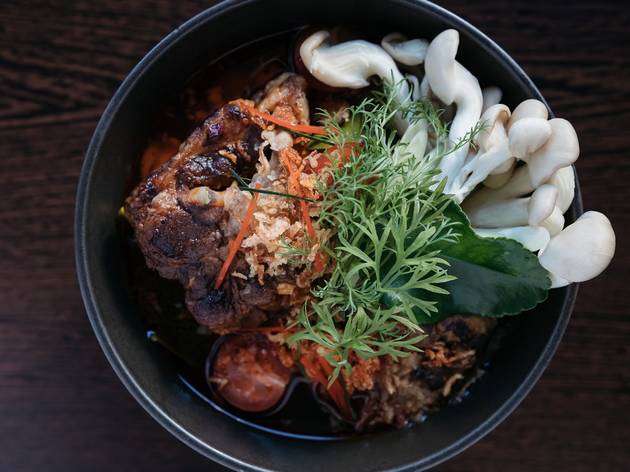 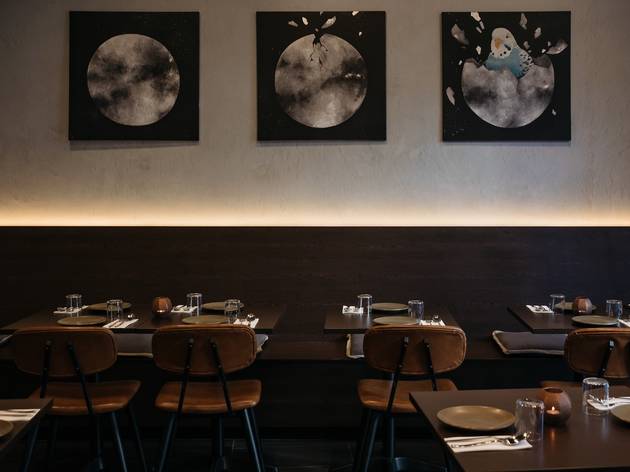 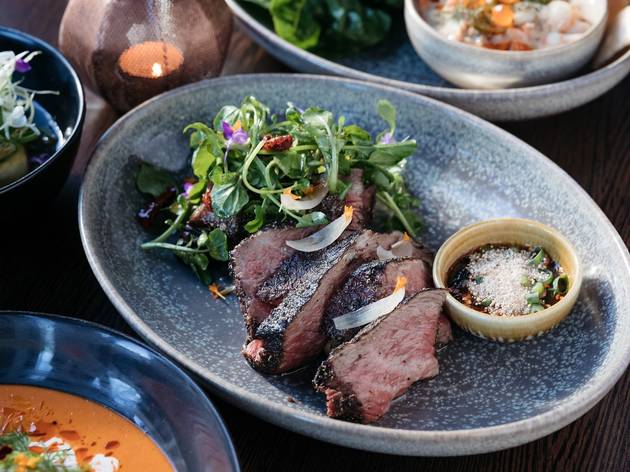 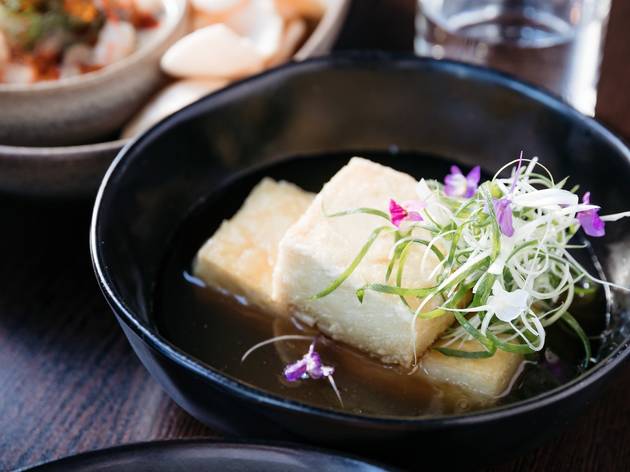 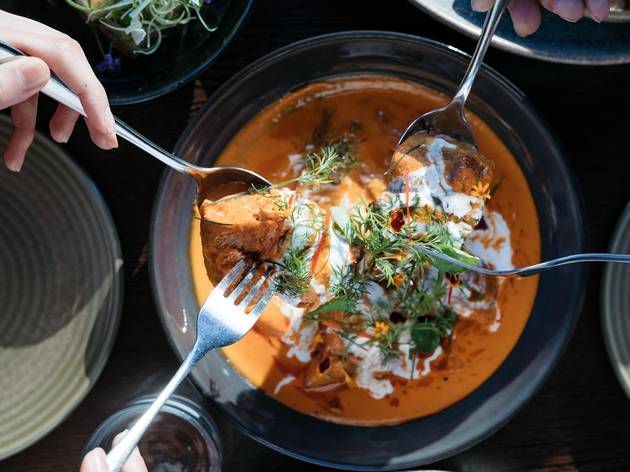 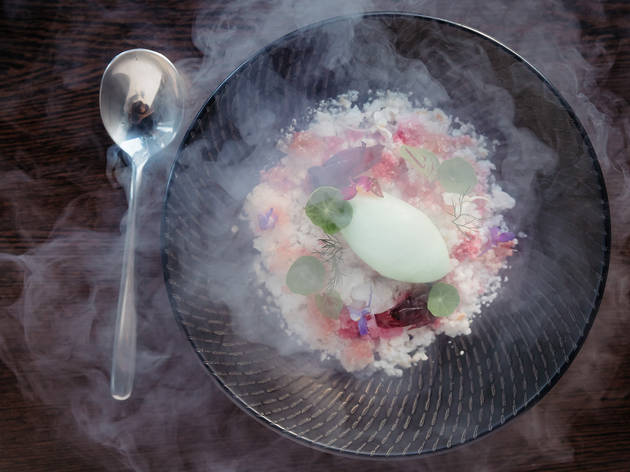 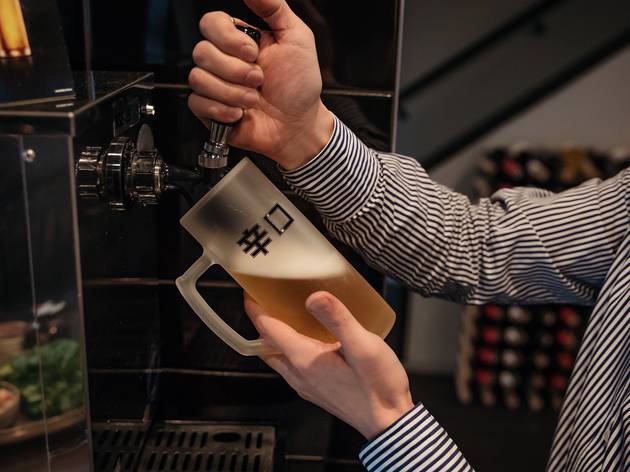 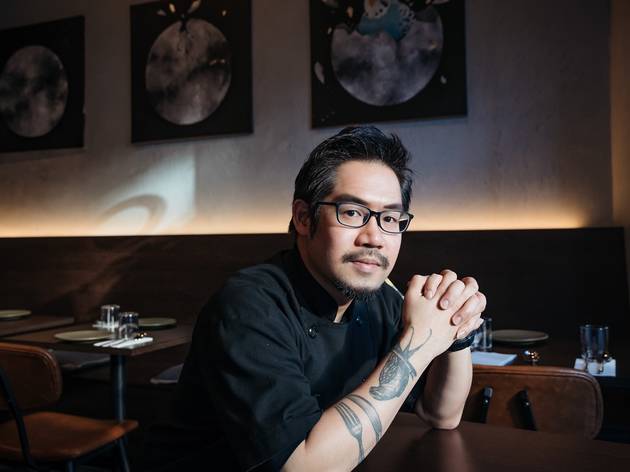 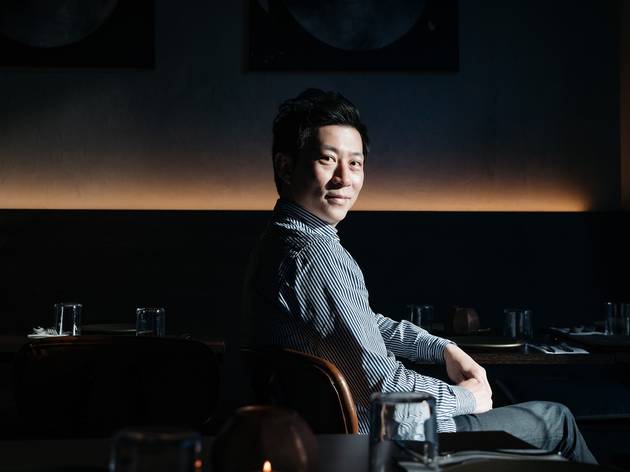 A Longrain alum heads up this innovative Thai restaurant on Liverpool Street, and we can’t help being drawn into its orbit

How do you convince a town whose bachelor degrees are powered by six-dollar Thai that they should pay $36 for a Panang curry? Serving it inside a room that looks to be moonlighting as a European wine bar is a good start. Elegant restraint is the design brief here, in the former Onde building opposite the original Darlo Bills, but the bar sends the clearest message about the intentions of this upscale riff on Thai dining. Blue velvet and brass stools, gleaming Champagne flutes, orchids, and an ice bucket full of unshucked Sydney rock oysters tell you that we definitely aren’t on King Street.

Sure, they’ve saved space on the menu for noodle hall of famers –­ pad Thai, pad kee mao and pad see ew – but at Moon, a panang duck curry is not so much a twist as it is a classic dressed up in dining finery. It’s smooth, warm, and enveloping, like a velour bathrobe, and the seam of soft roast pumpkin under the confit duck is pulling a Jedi mind trick that lets it become one with the creamy, salty and slightly sweet sauce.

Have you been searching for the soup equivalent of a flu shot? Medical science should study the revitalising effects of chef Aum’s oxtail soup, which is several time zones and multiple border crossings away from its European roots. Imagine a tom yum with the sour citrus hit turned up to maximum wattage, 12-hour beef falling off the bone, broth-blushed mushrooms and lemongrass for days.

Larb is reimagined with pork mince and nubs of prawn swimming about in a warm, coconut creamy sauce spiked with ginger, lemongrass and galangal. Scoop it up onto prawn crackers and slices of fresh cucumber or pile it into lettuce leaves and marvel at a dish from the tropics making such a convincing case for the comfort food crown.

Things get less traditional and a whole lot less Thai as you progress, and that’s the key difference at Moon. A Jack’s Creek beef rib is cooked on low for 72 hours and the blackened bark would impress a Texan pitmaster. It’s a fatty, flavoursome cut of meat in its own right, but its full potential is capped by a restrained hand on the seasoning. This is a job for salt bae.

A side of deep-fried tofu in soy broth is staking a claim further north in Asia, and the Asahi dispenser behind the bar is yet more supporting evidence of a subtle Japanese accent – or maybe it’s just because nothing goes with fragrant, spicy food like a big frosty beer. Either way, those tall beer mugs with handles are as popular an order as anything from the wine list – maybe they are just working up to the grassy, crunchy Snake and Herring WA chardonnay that’s as smooth as cold marble on your palate, or a  dramatically cloudy orange wine from Whistler in the Barossa that tastes not unlike a farmhouse scrumpy promoted a few dining classes.

The portions here are generous but more fool the person who fails to reserve stomach real estate for a quenelle of green apple sorbet on a lychee granita – a dish so fresh, clean and light it makes you feel like you could do it all again. More importantly, you’ll want to.