Who is Bernie Dieter? Meet the punk-cabaret queen seducing Sydney

She has been described as “an electrifying cross between Lady Gaga, Marlene Dietrich and Frank-N-Furter in sequins”. And it appears that the gin-soaked siren call of the mischievous German queen of punk-cabaret, Bernie Dieter, is exactly the tonic to heal what ails Sydney at the critical juncture of 2022. I haven’t met a person yet who has left her show without having been utterly entertained. But what is that makes this mercurial, mysterious mistress of mirth so seductive for the inhabitants of the Harbour City?

“What I love to do is just really live in that moment in the show, and that beautiful connection that you can only get with live entertainment, live music, live theatre,” she says. “That kind of magic electricity that comes from people being close together in a room and experiencing live art together. That's the magic of cabaret and of what we do.”

On the afternoon I speak to Dieter over the phone, her voice carries a velvety charm. Every other sentence is punctuated with a distinctly German “you know?”. I’m not sure where the stage persona ends and the real person begins – and I don’t think that I want to know.

“You can never drink too much gin,” is her advice. I can imagine that she’s sipping on the juniper spirit throughout our chat. 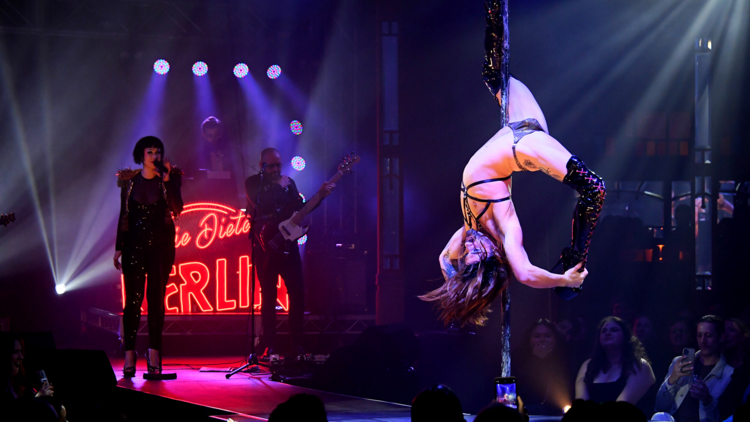 After pitching up by Circular Quay earlier this year, her Spiegeltent spectacular Bernie Dieter's Club Kabarett (until Sep 25, 2022) is currently on round two in Sydney, the jewel in the crown of a supersized Sydney Fringe season. With a bombastic troupe of sideshow performers in tow, Bernie is the hostess with the mostest, performing dangerously funny original songs and creative covers, all set to the soundtrack of a live Weimar-punk jazz haus band.

With some performers from her earlier Sydney visit returning for this encore season, plus some deliciously risqué newcomers, Dieter’s crew serve up gender-bending aerial and pole dance, boundary-breaking burlesque, intergalactic sword swallowing, full-frontal nudity, and even the rarely seen art of hair hanging.

“I mean, I'm very lucky and I have a lot of talented friends from all over the world. It's always an adventure. You never know who you're gonna meet in a little dive bar on the back alleys of Berlin or London or Australia,” she says of her troupe. “I always choose to perform in Spiegeltents when I can, because they’re such an original atmosphere, you know? And there's just something so intimate about this beautiful mirrored tent that has this old soul.”

I’m a bit more out there probably than what people have seen before. But it's all done with love

It seems that Dieter was destined to be a ringleader in a tent, the sideshow life runs in the family: “My Oma has always been a big part of my story. She and her family owned a circus in Germany back long, long before the Berlin Wall came down. And as a little girl, she was actually smuggled from East to West Germany, hiding in a circus caravan.”

Dieter grew up in Koln, Germany, and her Wikipedia page would have us believe that she ran away from home as a 16 year old to live above a drag club in Berlin.

“She was an incredible woman [my Oma]. She really inspired me in a lot of ways, with some of her stories from back in the day when she was growing up in the circus. But then you've also got some amazing performers currently doing incredible things as well, the world of music and cabaret. I mean, The Rocky Horror Picture Show was also an incredible inspiration. I watched it when I was about eight years old and my parents actually stopped it before the orgy scene. I thought it ended there until I was about 12 – and then I saw the actual ending and my mind was completely blown! Another film that hugely inspired me was Hedwig and the Angry Inch. Just people celebrating their stories and celebrating difference.” 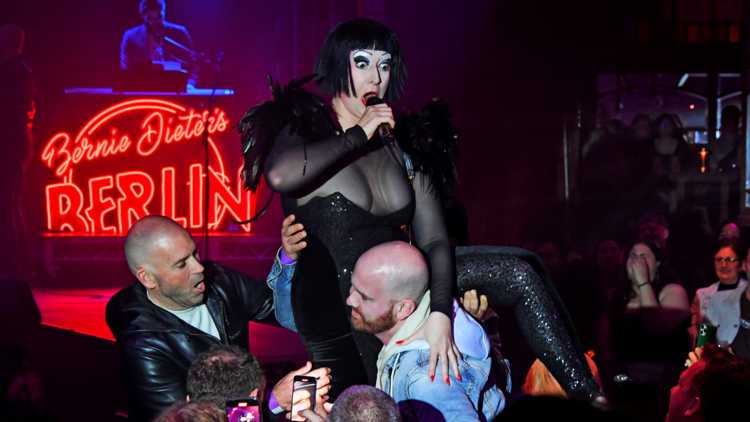 If you've ever seen Cabaret (the stage musical, or the 1972 film adaptation starring Liza Minnelli) you’ll also notice that Dieter’s style also has a distinct flavour plucked from the underground cabaret movement of 1920s Weimar Era Berlin. In her opinion, it is no coincidence that movements from the roaring ’20s are resonating today.

“Well, it's a really interesting time right now, because the Weimar Era actually came about after the [First] World War and also the Spanish flu pandemic… people were just desperate to get back out into the world and connect with other humans. It was the first time that the outsider became the insider.

“A lot of people had fled and escaped the war in different countries and ended up in Berlin. It was, you know, poets and artists and kind of this real underground party vibe. Everyone was just celebrating that they were still alive, and difference actually became something that people aspired to… queer culture. There were women dressing as men and going to bars and obviously, men dressing as women as well, you know, drag kings and queens and all kinds of gender fluid artists being celebrated for the first time.”

The Weimar Republic was established by Jews, socialists and liberals. During its so-called Golden Age, the period between 1925 and 1929, celebration and decadence went hand in hand with progressive movements.

“I think that really embracing that diversity is something that we are on the cusp of right now, as well. What we've been through in the last several years, not only with the pandemic, but also politically, there's this real resurgence of right wing, conservative politics. So I guess, we are kind of fighting against that in the same way that they were then. I feel like there's a real strong connection between the two times, and that's what we are trying to do in our show, to really bring that celebration of humanity. It's our differences that make us all beautiful and unique and human. That's really what we're kind of trying to recreate, that theory of the outsider becoming the insider.” 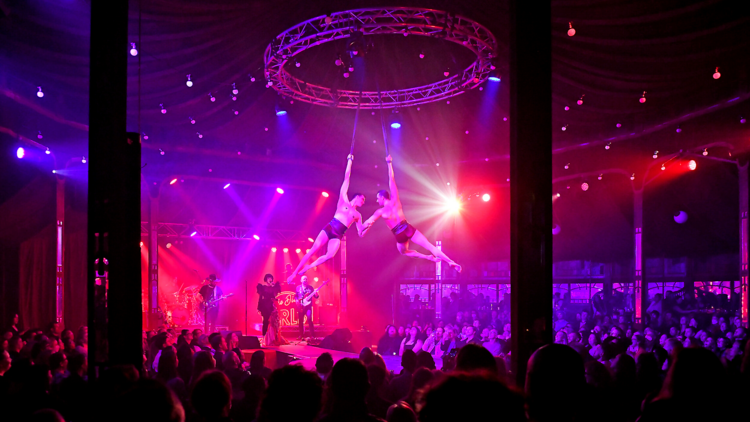 When Dieter is commanding the Spiegeltent, everyone in the audience is welcomed into the club, from accountants to off-duty drag queens. Don’t expect the kind of audience interaction that leans into ridicule and bullying – but if you’re a large man with a beard, you can expect that you might catch her eye and be dragged on stage.

“I’m a bit more out there probably than what people have seen before. But it's all done with love, you know, and I feel like they feel safe with me. That's always my mission, to make people feel safe. We're not attacking anyone, we are not trying to marginalise anyone, we are creating an inclusive space where we feel that we can celebrate difference, and hopefully, they feel that too.”

And that, dear reader, is an experience that you can only get at this kind of live show. Dieter elaborates: “You know, the screen is amazing for so many different things, but there's something about the wonder of actually being so close, especially in the Spiegeltent, so close to these acrobats and sideshow artists who are doing really dangerous shit, you know, putting their life on the line.”

Bernie Dieter’s Club Kabarett is the star attraction at Runaway Gardens, a pop-up festival village at First Fleet Park, Circular Quay, as part of the 2022 Sydney Fringe. It runs until September 25, and extra late-night weekend shows have been added due to popular demand. Find out more here.