What’s better than a pint? How about a pint drunk in the company of a vengeful spirit from beyond our physical realm?

Londoners love a ghost, don’t they? Maybe it’s the sheer amount of war, plague, violence and drama the city’s undergone. This place must be crawling with hundreds of spectral denizens. And with some of London’s best boozers dating back to the 1600s, it’s inevitable that many of the capital’s oldest pubs will be hotbeds of paranormal activity. That’s just a fact.

Ghosts and ghouls are reported in some of London’s oldest and most-loved pubs, many of them with fascinating tales behind them. Whether you’re in the market for a spooky pint this Halloween or just genuinely curious to know why people still leave dollar bills out for an old foot soldier named Cedric, take a look at our round-up of London’s most haunted pubs. 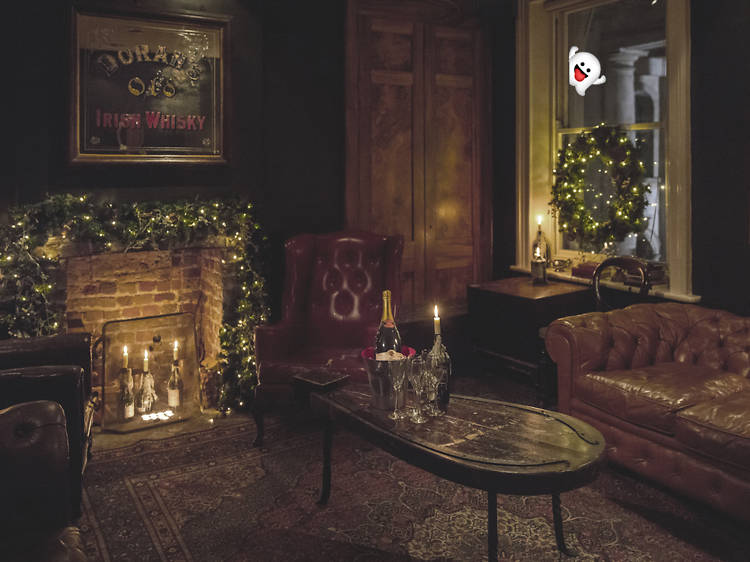 Many people attribute the spooky vibe at this Spitalfields pub to its entanglement in Jack the Ripper’s story. But sightings of spectres haven’t been as Ripper-related as you might expect. One of the pub’s Victorian landlords George Roberts was murdered with an axe and his apparition is said to have terrorised staff who stayed on the pub’s upper floors. There are also some gruesome tales of the murder of a baby that have so scared the bejesus out of mediums, they refuse to enter the rooms upstairs. You’re probably better off with pints on ground level. 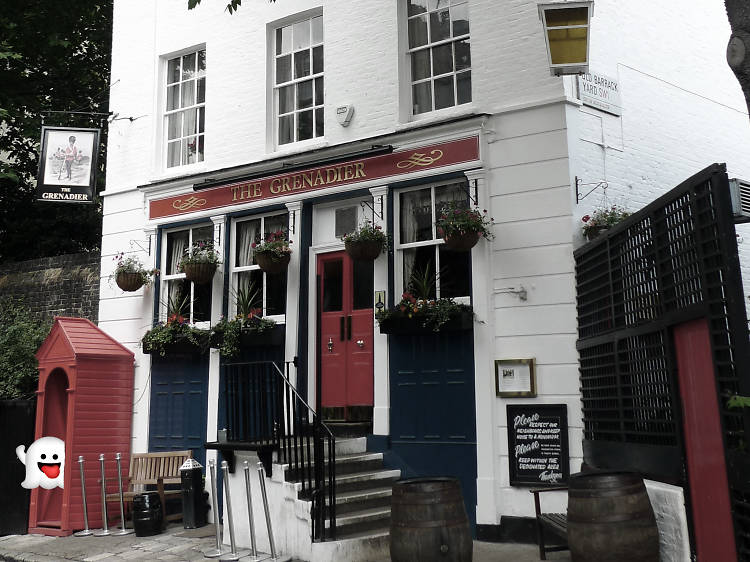 Step into this former officer’s mess to meet poor old Cedric, a junior soldier who met his fate when his comrades bludgeoned him to death after he failed to pay his gambling debt. You’ll now find the ceiling covered in dollar bills, tourists and ghost hunters keen to help Cedric pay off what was owed. Other guests have talked of the chill in the air, while staff have reported the feeling of a presence in the cellar, hearing footsteps and sighs emanating from down there. Clippings from newspapers are framed on the walls and tell of other spooky sightings from over the years. 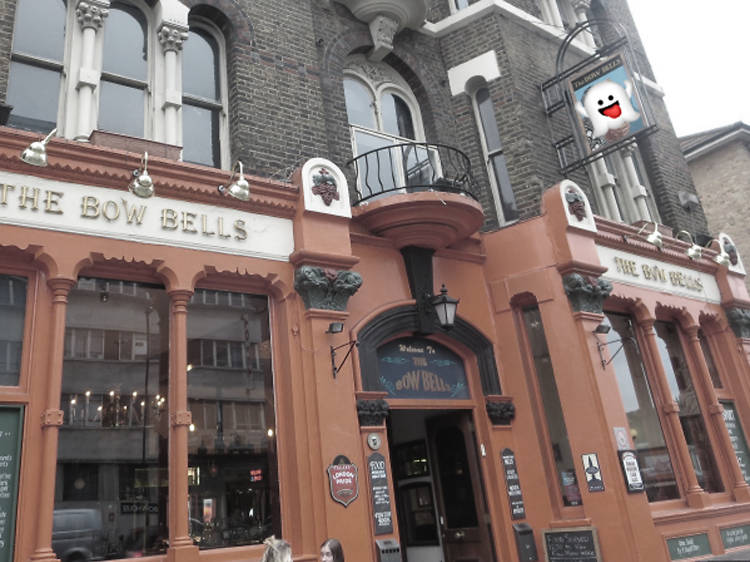 The haunting at this East End pub sounds more like a maintenance issue to us, with a phantom flusher said to menace the ladies’ toilets. Over the years, the toilets have said to mysteriously flush while bottoms were perched upon seats. So far, not pants-wetting material – but in 1974, The Bow Bells team decided enough was enough, conducting a séance in the lavs. When the phantom flusher was asked to make itself known, a toilet door slammed open with such force that it broke one of the pub’s mirrors. 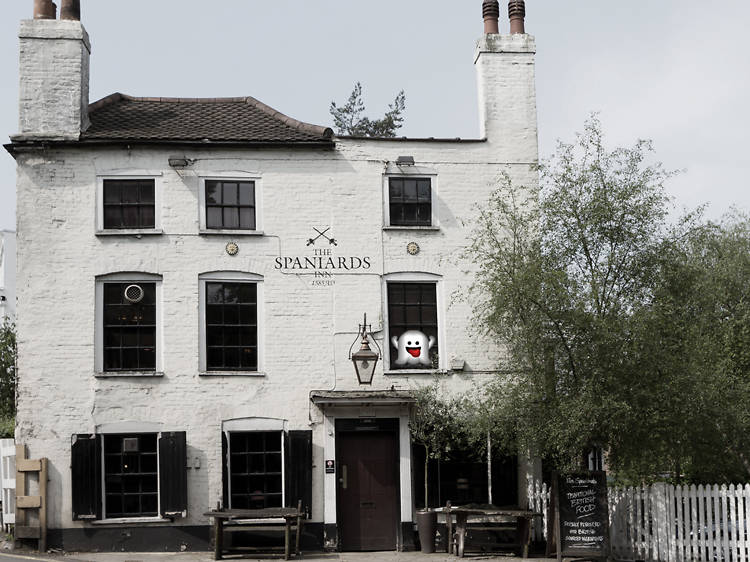 The former coaching inn on the foot of Hampstead Heath attracted its fair share of Romantic writers for overnight stays in the late 1700s/early 1800s, somewhat cementing its gothic status. Sure enough, the Spaniards hasn’t been short on spooky sightings, from the spectre of a Spaniard who lost his life in a duel of love to the presence of a woman in white seen hanging out in the beer garden. Most famous is a ghostly version of highwayman Dick Turpin who is said to haunt the street at the front of the pub. Supposedly, he was once a regular at the pub, when not forcing locals to ‘stand and deliver’. 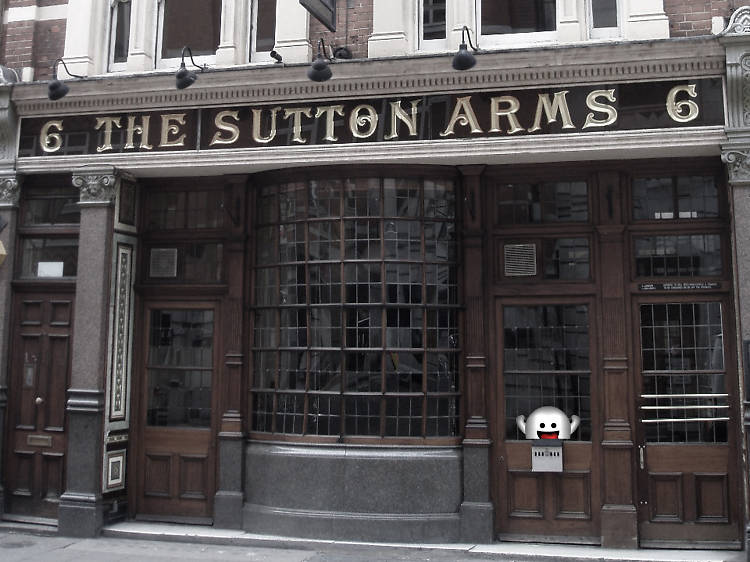 We’re not sure this tale is all that blood-curdling, but we like it. The Sutton Arms is said to be haunted by a red-haired gentleman called Charlie, whose apparition stops by certain corners of the old Smithfield boozer. Charlie the ginger ghost (no, not your Tinder ex) is said to flash a cheeky smile at those who’ve had the pleasure of making his acquaintance, before disappearing into thin air. He once popped up between a pair of ladies while they were enjoying a lunchtime tipple, flashing that famous grin before buggering off again. Charmed. 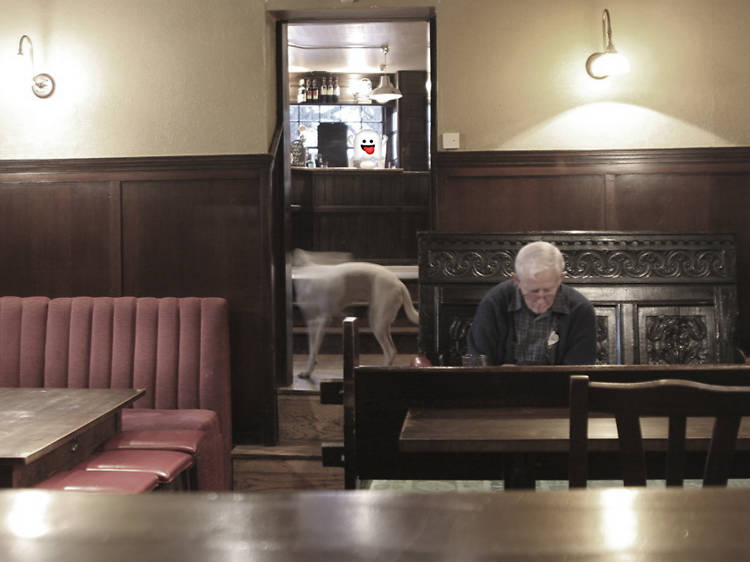 As one of London’s oldest pubs and with its chilly, cave-like rear rooms, it’s no surprise that The Flask has spooked a fair few punters. The story goes that a Spanish barmaid hung herself after discovering her landlord boyfriend was the 18th century equivalent of a fuckboy. Staff and visitors have since reported reflections that shouldn’t be there or a strange sense of foreboding that not even that last round of jägerbombs could account for. 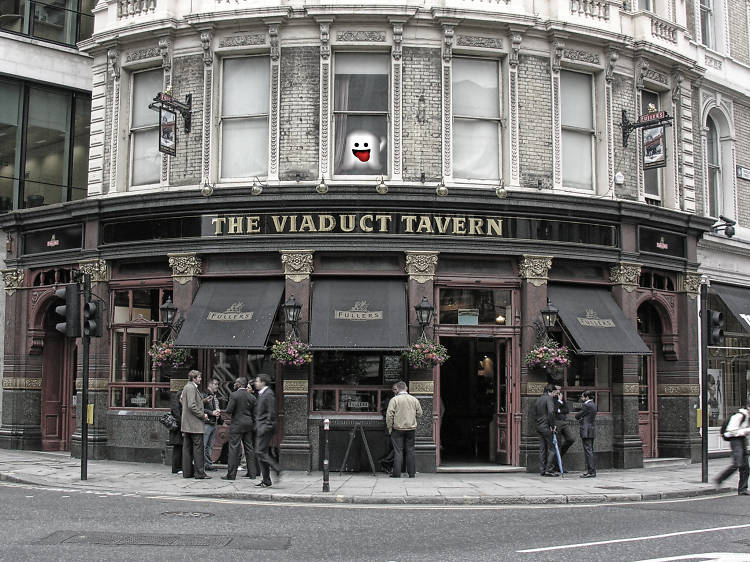 Many people visit the Viaduct Tavern because of its claim as one of the capital’s original Victorian gin palaces, blissfully unaware of past paranormal activity on the premises. The space below ground at the Viaduct Tavern was once used as prison cells, and its former inmates have been giving pub staff a hard time ever since. In the ’90s, a manager claims a cellar door slammed shut on him and the lights went out, and that he wasn’t freed until his wife heard his screams. Upstairs, a pair of handymen claim to have seen a rolled-up carpet floating mid-air as if it were magic. 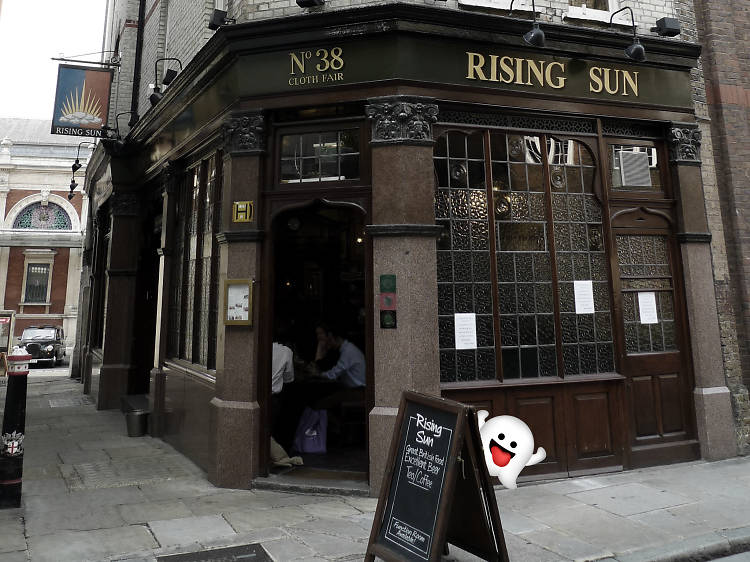 The Rising Sun sits near St Bartholomew’s Hospital and it’s said to have attracted a band of body snatchers through its doors in the 19th Century. The story goes that these bandits would drug and murder the pub’s innocent punters and then sell their bodies to the hospital for medical research. Pretty gruesome. As such, it’s no surprise that supernatural happenings have since been reported. Most notable is the time a pair of barmaids living above the pub were terrorised by a bedsheet-removing ghoul, or the time a recent landlady was disturbed in the shower by the feeling of an icy hand running down her back. Eugh, there’s nothing worse than a pub perve.