My Account My Profile Sign out
My Account
Search
Worldwide Europe United Kingdom England London Face masks, one-way systems and snob screens: is this the future of London’s bars?

A standard, misguided weeknight session used to go a bit like this: you’d squeeze into a narrow gap at the bar and feel incredibly smug, exchanging a knowing glance with a bartender. You’d find your mates perched on the edge of a table shared with strangers (navigating walls of elbows to make it through, of course). After a few rounds (who’s counting?) some of you would move on to another bar ‘on the way home’ – cocktails and shots might have been involved, and maybe even a dancefloor. Then, the hangover from hell.

As lockdown lifts and as hospitality venues around the world begin to welcome back regulars, it’s starting to feel like nights like this are tantalisingly just around the corner. The truth, though, is much more complicated. The near future of drinking in London probably won’t look anything like we’ve seen it before. But how different will it be?

‘Here in Asia, we’re okay with wearing a mask’

The first clues come from around the world, but in true fashion, no two cities are the same. ‘Not only is it a different governmental approach, but each [cities] have had very different cultural approaches to them as well,’ says Ryan Chetiyawardana (aka Mr Lyan). He’s one of the world’s best bartenders and owns Lyaness bar here in London, Amsterdam’s Super Lyan and the newly launched and immediately closed Silver Lyan in Washington DC, so he’s been following global trends especially closely.

In Hong Kong, for example, which reopened its bars on May 8, venues can only operate at half capacity, administering temperature checks to punters on the door and seating groups no larger than four. Many now operate a booking system so that they can stagger visits during opening hours. Staff are required to wear masks, and facilities are subject to regular disinfection.

Other countries, like Italy and Australia, seem a bit more relaxed, but are maintaining social distancing and making the most of outdoor spaces. Across the board, it’s definitely a case of safety over spontaneity – which is something we can all appreciate right now. But measures like these feel strange for a good-time city like London; drinking suddenly doesn’t sound like a whole lot of fun.

‘A friend in Singapore was saying that, if they have to do temperature checks at the door, it’s an odd thing and it breaks the experience aspect that we all try to build for our venues,’ says Chetiyawardana. ‘But then he was like, “How’s it going to be for you guys? Here in Asia we’re okay with wearing a mask, it’s something that people do consciously when they have a cold.” I think it’s going to feel very weird for us here.’

He’s got a point: PPE seems to come less naturally to us Brits. But Chetiyawardana sees face masks as a ‘crucial’ move in giving confidence to customers, and adds that bar staff are already au fait with strict health and safety procedures. It’s something BrewDog is fully embracing for its return, too. The Aberdeenshire brewer and beer bar behemoth has already shared a preliminary ten-step plan for the life of its venues after lockdown, using intel from the reopening of its other bars around the world. It sees all staff wearing masks and gloves among the measures.

Even London’s more immersive places are thinking about how to integrate protective gear into the experience. Tristan Scutt, the owner of Little Nan’s Bar – a bone fide party spot – has come to terms with that fact: ‘We’ll just have to get on with it, and think of new ways of how we can make the experience the best that it can be.’ One of his novel approaches? Leopard print face masks for staff.

‘If you’re reducing by 70 percent, it’s very hard to make a business viable’

If government guidance is anything to go on, additional PPE will be joined by strict social distancing enforced by one-way systems, table service and perhaps even the use of snob screens – made from perspex, rather than a delightful throwback to Victorian times – which Oakman Inns is championing in a blueprint it’s shared with the government for its UK pubs.

And another icon from the great British boozer could see its moment in the spotlight: the beer garden could well have a surge in usage this summer, with less fear around socialising in outdoor spaces. ‘Amsterdam is starting to unfold and it’s mainly on outdoor spaces, so we’re looking at how that’s worked,’ says Chetiyawardana. And Emma McClarkin, the CEO of the British Beer and Pub Association (BBPA) thinks it’s only a matter of time until beer gardens open up. ‘We want to be maximising the safest parts of our pubs where we can implement those restrictions – and outdoors is the obvious one. So I would absolutely love to see our government unlocking our outdoor spaces sooner,’ she says.

But London venues, especially those without lush outdoor spaces, say that social distancing will be near impossible to adhere to. The government has warned that, ‘some venues which are, by design, crowded and where it may prove difficult to enact distancing may still not be able to reopen safely at this point.’ As such, a group of trade bodies – including UK Hospitality, the British Institute of Innkeeping (BII) and the BBPA – is now working with them to try and improve what might seem like a gloomy outlook for London’s venues under social distancing. One thing they’re banking on is a loosening of the two-metre rule.

‘You’re talking about 30 percent of pubs that are going to be able to open with an increment of a two-metre radius. Why? Because we’ve got different characteristics, different layouts, nooks and crannies, Grade II-listed buildings and other things that make it difficult for us to implement the two metres,’ says McClarkin. She believes a much more buoyant 80 to 90 percent of bars and pubs in the UK could reopen with a distance of one metre in play.

And while larger UK pub chains like Oakman Inns, JD Wetherspoon and BrewDog can anticipate a return for their roomy boozers – reassuring testing grounds for socially-distanced service – and can better afford to integrate technology and added PPE to their processes, it’s harder for London’s small bars and pubs to afford.

Indeed, Chetiyawardana worries that, from his conversations, 30 percent of London’s bars and pubs won’t have the funds to survive the current closure period that social venues have had to endure. And McClarkin fears that social-distancing measures could also prove financially unviable: ‘We already know if you open up a pub at the moment with two-metre restrictions, the average for pubs is they’d reduce their capacity by 70 percent. So if you’re reducing already by 70 percent, it’s very hard to make a business viable on 30 percent of trade.’

Ordering your pint from a bartender in a face mask is a freedom far greater than what we’ve known these last months – a temporary lull infinitely worth it if it means getting the industry back on its feet and the survival of our much-loved London venues. Londoners are doing a duty by embracing whatever new measures they’re faced with when the bar opens again. Even if drinking down the pub has become a bit like a scene from a weird sci-fi movie, it’s paving the way for a faster return to a normality we might still recognise. Plus, Lyaness’s owner acknowledges that right now people are craving the social interaction you get from being in a bar, and says that if the fun is a bit absent, it will only be a temporary means to an end. ‘The priority with everything is obviously safety. As soon as we can balance that into the equation we can find ways to get the fun back into the mix.’

When will we see our bars and pubs again? 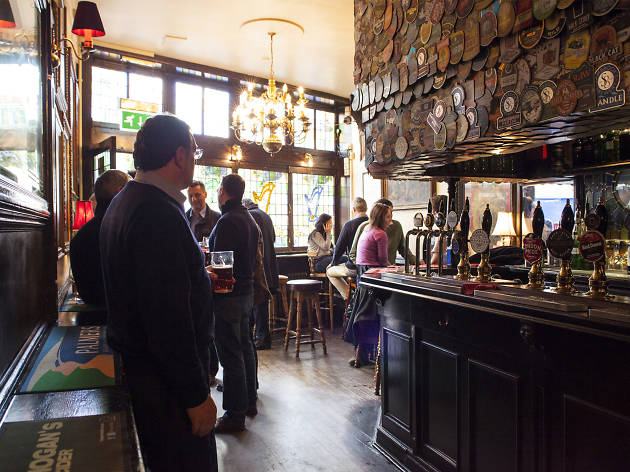 While London’s road out of lockdown feels a little long and winding right now, and while a lot of the capital’s future freedoms ride on how the current easing of restrictions pans out, we do know a bit more about when you might be necking a pint at your favourite London pub.