It’s midday on a Saturday and 12 strangers are strutting around Dalston’s Arcola Theatre as if they have massive cocks. We are taking part in a ‘mansformation’ workshop.

Just to be clear, this isn’t about becoming some buff male ideal. Instead, it’s an introduction to the art of drag. And, surprisingly, it’s not all about packing socks in your knickers and strapping down boobs. Well, not completely.

The session is delivered by two women from the drag king collective Pecs, whose recent sell-out show at The Glory included a Black Lives Matter piece, a three-ages-of-Prince tribute and a brilliant group lipsync to Bel Biv Devoe’s ’90s classic ‘Poison’.

It’s quite far from the runway struts and death drops of the sparkling contestants on RuPaul’s Drag Race. Women and non-binary people are redefining the scene.

The number of dedicated king nights has exploded across London in the past few years – it is definitely the golden age of the king.

‘We’ve had bras thrown on stage. It will be knickers next’

Temi Wilkey and Isabel Adomakoh-Young have been ‘kinging’ for four years. They talk about their ‘men’ with tenderness and a fair amount of lust. ‘We love our men,’ says Wilkey, whose drag persona is the brilliantly named ‘Drag King Cole’. ‘It’s not a parody. You sometimes embody what you find attractive in masculinity and that can inform how sexy you feel.’

That sexual charge often spills out from the stage, with many of the Pecs boys being propositioned post-show. And mid-show. ‘I’ve had people tell me they feel sexually confused after a show or have a man crush – I love that! We’ve had bras thrown on stage, and had to return them – they were good bras, too. Hopefully it will be knickers next.’

Director Celine Lowenthal leads us through a walking workshop, and yes, at first we do just practise putting one foot in front of the other but it gets harder. She asks us to exaggerate the more masculine aspects; the result is either sweeping Liam Gallagher-style swaggers or ridiculous roadman bops. It’s a smart way to expose how limited our concepts of gender can be.

‘Men in the audience often talk about how they didn’t realise that masculinity can be performed. We heard that a lot in the beginning. People would ask “so you’re just going to wear men’s clothes?” but it’s more than that. It comes from physicality and posturing.’

But it was when we read aloud the lyrics of Leonard Cohen’s ‘I’m Your Man’ that the politics of drag became clear. First in a more masculine voice, then more feminine. The lyrics ‘If you want a partner take my hand, or if you want to strike me down in anger, here I stand, I’m your man’ take on very different meanings depending on the pitch of your voice. Try it, it’s pretty creepy.

Pecs move beyond that initial political statement of women dressing up as men. Wilkey has a piece where Drag King Cole lipsyncs to Kendrick Lamar, Malcolm X, Tupac, Public Enemy and Tottenham riot newsreels. ‘We’ve always seen our work as a form of protest against gender binaries. But in the last year we’ve been pushing our politics more and more.’

Temi and Isabel whip through make-up, binding and packing. We learn to reverse all contouring tips and to avoid gaffer tape for binding – it’s rough on nipples. And we’re advised to only use rolled-up lacrosse socks if your man is packing a hefty piece. And with that, a dozen new drag princes were born.

Bar Wotever
A supportive and gregarious weekly night of queer performances at the Royal Vauxhall Tavern.

Boi Box
Themed monthly nights at both The Glory and She Soho hosted by couple Adam All and Apple Derrieres. Drag kings and first-time princes can take to the stage between tunes from the Mr Mix.

The Cocoa Butter Club
A monthly showcase at Her Upstairs for performers of colour that often includes drag kings alongside spoken word artists, vogueing and live music.
Her Upstairs.

Man Up
This annual competition at The Glory is a key fixture in the king calendar. The heats for 2017 begin on May 31 with the grand final on June 28. The crowned king pockets a sweet £1,000 cash prize.

The best drag shows and nights in London 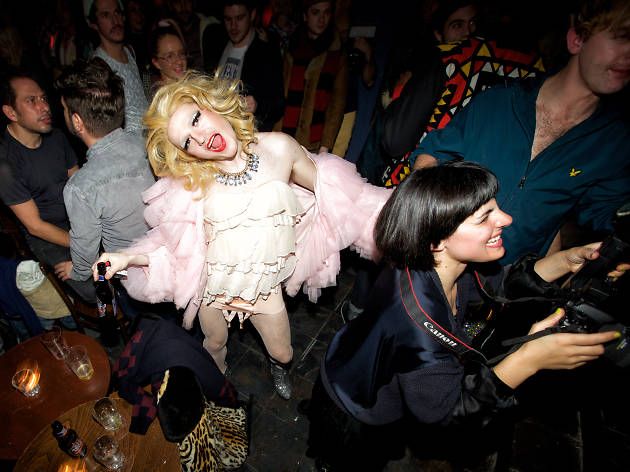 London has an abundance of gay bars and queer clubs, but where’s the best place to party with drag queens and kings?