Once upon a time going out for Christmas dinner with your pals was tricky if you were a vegan in London. (Hello, sprouts!) That's changed recently though. Creative vegan options are popping up at restaurants across the city this festive period, but are they any good? We got Rose (a vegan, whose ideal meal is a falafel wrap) and Dave (a steak and chips lover) to try out some of the weirdest and most wonderful. From no-egg-nog to 'turkey' ice cream, find out what they loved (and what they weren't so sure about). 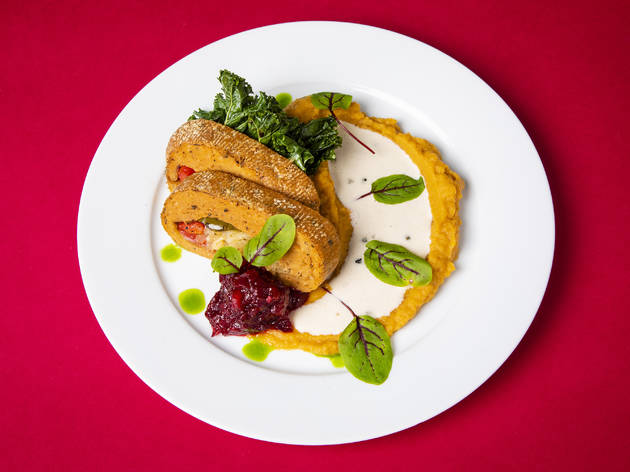 Dave ‘It does look good. It’s got a bit of a Mexican flavour – it’s a nice heat. This is good.’

Rose ‘I’m really enjoying this. If you were a vegan looking for a substitute for a traditional Christmas dinner, this would be the one. It’s got the comforting nostalgia factor.’

Dave ‘If you were going to a Christmas party with a couple of vegans in tow, you’d have a great time with this. Club Mexicana have outdone themselves here. I’ve eaten the whole thing.’

Rose ‘I’m a huge fan. The Mexican spices give it a lot of kick, but there’s also enough of the traditional fare so that you feel like you’re having an amazing Christmas meal.’

Available until Dec 23. Part of the Christmas set menu, £30 per person. 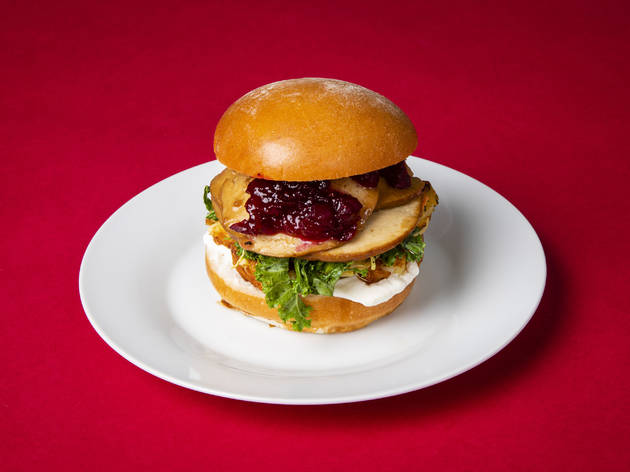 Dave ‘This is the one I was looking forward to… then they go and stick curly kale in there.’

Rose ‘Just for some extra health, my friend!’

Dave ‘There are raw brussels sprouts in here! If somebody gave me raw vegetables on Christmas Day, there’d be a riot!’

Rose ‘The raw vegetables are a bit weird, but otherwise I think it’s really good. It makes me think of my grandma’s Christmas dinners when I was a kid, before I stopped eating meat. It’s the first taste of Christmas dinner that I’ve had in a long time.’

Dave ‘That is not a Christmas dinner. Just try that turkey stuff – it’s like eating a shoe.’

Rose ‘No, it’s not! Vegan meat can be like cardboard, but this is moist and has texture. I’m really impressed. Aren’t you impressed?’ 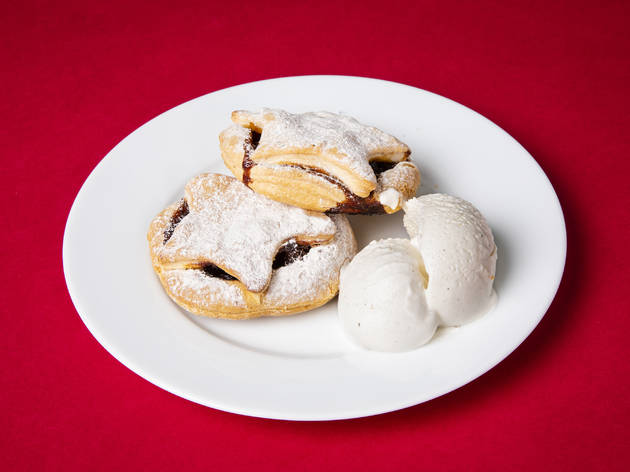 Dave ‘I like this. If this turned up on my Christmas table for pudding, there’d be no fight at all. It’s very good. Wow!’

Rose ‘It’s especially impressive because it isn’t easy to achieve a pastry that’s so crispy and flaky without dairy. Mince pies aren’t traditionally vegetarian or vegan because of the suet. But you don’t need that. It’s a cruelty-free delight.’

Dave ‘You wouldn’t know any different. I think that’s one of the best mince pies I’ve ever had. It’s fruity, has great flavour, and the pastry’s tasty.’

Rose ‘It’s not too stodgy.’

Dave ‘Exactly. I would go out of my way to
find this again. It’s a top-quality mince pie.’ 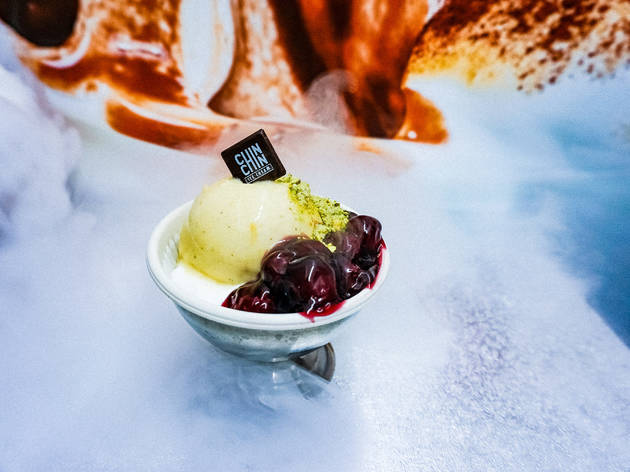 Apple purée and vegan custard infused with vegan ‘turkey’ stuffing and blitzed with sage and thyme.

Rose ‘Whoa… there’s so much going on in my mouth right now.’

Dave ‘There’s a definite custard taste. I’m a fan of a good, creamy custard. And this is one of them.’

Rose ‘It has a creaminess you don’t often get in vegan ice creams. Sometimes vegan desserts have more sugar to make up for a lack of depth. But this doesn’t need to do that.’

Rose ‘You can taste the apple. This is what vegan cooking should be – using fresh ingredients, not trying to fake things. I’m loving this.’

Dave ‘I like it, but it’s quite rich. I wouldn’t want too much of it.’

Rose ‘It is quite intense. But in a good way. Christmas is about indulgent food. I’m considering getting this for my Christmas dinner.’

Available until Dec 24. £4.45 including a topping of your choice. 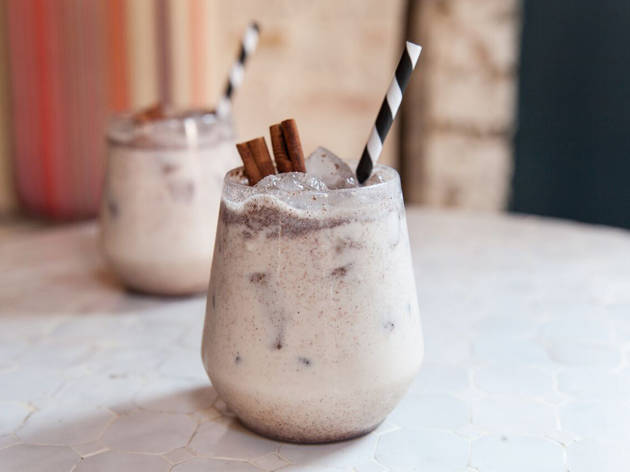 House blend half and half made with almond milk, cashew milk, rum, holiday spices and cinnamon.

Rose ‘Oh my God. It’s very alcoholic! I’m getting that real alcohol burn. I love a boozy drink, but you can’t really taste anything else.’

Rose ‘There’s too much rum and the milk alternatives aren’t creamy enough, so you don’t get that warming, creamy, comforting flavour.’

Dave ‘It doesn’t get much better on a second sip.’

Rose ‘I think they’ve leaned too hard on the rum.’

Dave ‘It’s not comforting. You need thickness, but there’s none of that.’

Rose ‘I think soy milk could’ve been better in there because soy is thicker and a little sweeter.’ 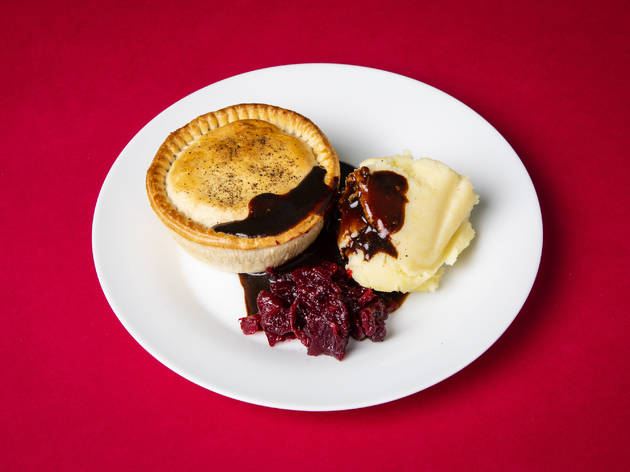 Rose ‘Some pubs don’t have veggie gravy, so I’m already feeling good that the gravy is edible for me.’

Dave ‘This looks good! I like the cranberry sauce. The pie is a bit mushy inside. I’m getting a bit of stuffing flavour, though.’

Rose ‘To be honest, the texture of the meat is a bit weird.’

Rose ‘It needs more structural integrity. I like the crust, though. People think you can’t do vegan pastry, but you definitely can. This pastry is very good – it’s got a nice golden crust.’

Dave ‘I’m learning stuff about vegans all the time. Yesterday I found out you can’t have chocolate. I mean, what the bloody hell’s going on there? And it’s all to make your mark on the… What is it?’ 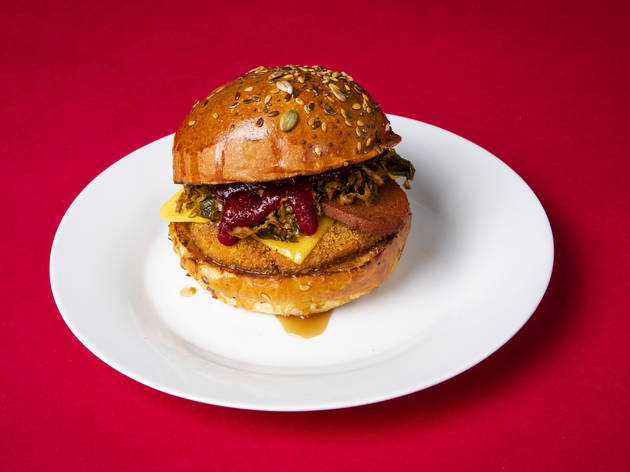 Dave ‘This is all right, actually. I’ve never had jackfruit before; it reminds me of pulled pork. It’s got a good flavour. I wouldn’t suspect it was vegan. I think I’ll go in for another bite!’

Rose ‘As someone who’s never eaten pulled pork, I don’t want to say it tastes as good as pulled pork because I feel that shouldn’t be the metric of how we talk about it… but it’s very delicious.’

Dave ‘Hold on, what’s this “bacun”? It’s good. I’d have that in a sandwich with a bit of brown sauce. Do you have brown sauce, your mob?’

Rose ‘We do. We have various kinds of sauce. One of the hardest things in vegan cooking is to nail the cheese. This one is in the middle of the spectrum between terrible and amazing. But that’s okay because the rest of it is very good.’ 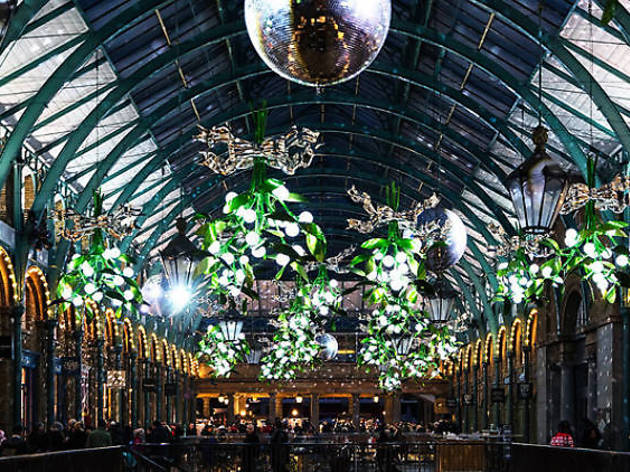 Feeling festive? With our guide to Christmas events, activities, winter markets and cosy pop-ups in London, you’ll have a holiday so jolly that it’ll make Santa jealous