We're all fans of London. There's heaps of great things going on, world-famous museums and attractions and a whole host of unusual things to do that make our city the best place on Earth. But these four Time Out readers have gone one step further and had their tributes to London permanently etched onto their bodies. With the annual celebration of body art - London Tattoo Convention (Fri Sep 25–Sun Sep 27) - heading for Tobacco Dock this September, we asked them to share the stories behind their London-inspired tatts.

I was born in east London and brought up in south-east London. I've always been a proud Londoner, and on a trip to Thailand about ten years back, I decided to get a tattoo that reflects this (I guess three months in a far-away country brought it to the surface). I didn't want anything too obvious so I decided to get the Latin motto from [the City of] London's coat of arms. It reads 'Domine dirige nos', which translates as 'Lord direct us'. I would never get my London tattoo changed. It reflects who I am and where I'm from.

I got a very simple tattoo of the Thames on my ribs when I was 20. The idea was for it to represent London, which was and is my home. That way it would never be something I'd regret, because even if I moved away it would remind me of my roots. I like the fact that it looks a little bit like a blue vein, so for me it has connotations of the life of the city, and my life too. When people see it they often think it might be a snake or something, because it's basically just a blue wiggly line, but if you look closely the Isle of Dogs gives it away. Its only drawback is that sometimes people start humming the 'EastEnders' theme tune when they see it.

I was walking in Victoria and I saw a woman kicking something out of a cafe. When I looked closer I saw that it was a baby pigeon. I went in and asked the woman why she had just kicked it on to the sidewalk and she said that it was just a pigeon, and that if it had been anything else she would have helped it. I feel like London is full of pigeons (not just of the flying variety), and think that they deserve not to be left to die on the street. I love London and pigeons remind me of it. They are grubby, there are so many of them that they can be annoying, but they are very hardy and determined to survive.

I started with a cutlery design that I got done in New York, and they referred me to Henry Hate, an artist in Shoreditch who's designed loads of London tattoos - Amy Winehouse was one of his clients. I'm a 'sarf' London boy and this is my whole life on one arm. The royal flush at the top is because I'm one of five brothers. I'm a Chelsea season-ticket-holder but I wanted a non-branded football tribute so went for the Stamford Bridge sign and 'Carefree' chant lyric. The bone marrow, pig's head and other food designs represent my work, Battersea Power Station my home, and Big Ben just is London.

Check out the London Tattoo Convention 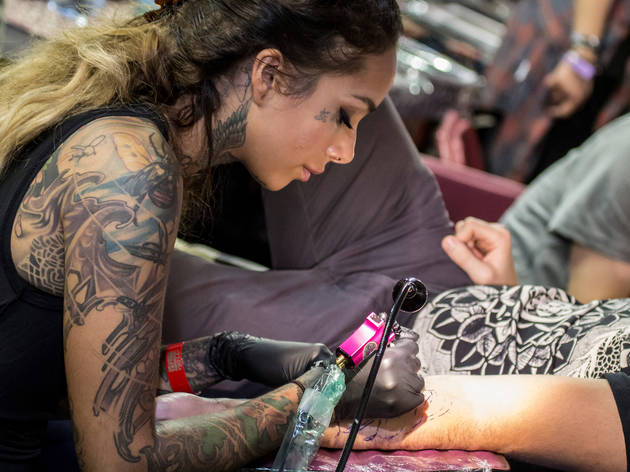 An annual body art festival packed with the best in the business, the London Tattoo Convention is back for an eleventh year in 2015, with more than 400 of the world's most talented tattoo artists confirmed to attend.