My Account My Profile Sign out
My Account
Search
Worldwide Europe United Kingdom England London Oi Sadiq! Has it been a good or bad decade for London?

This year, we’ve been giving some of our favourite Londoners the chance to put one big question to the Mayor. Now it’s our turn: Time Out’s James Manning wants to know whether Sadiq Khan feels that the last ten years have been kind to our city.

James ‘Oi, Sadiq! Like you, I’m a proud, born-and-bred Londoner – but I don’t feel it’s necessarily been the greatest of decades for the capital. What about you? Do you think our city has got better or worse since 2010?’

Sadiq ‘Well, we’ve had a decade of austerity. Since 2010 we’ve had record cuts in policing, schools and the NHS, and we’ve seen the consequences. But notwithstanding that, look at the great things which have happened in the last ten years. We had a great Olympics, becoming the sporting capital of the world. We’re also the cultural capital of the world: from major films made in our city to Stormzy to Adele in music to fashion and culture. We should be really proud of punching well above our weight.’

James ‘But it does sometimes feel a bit hopeless being a Londoner when we’re surrounded by so much bad news for the city.’

Sadiq ‘Look at the history of our city. In the face of adversity, we stand up – we don’t cower or become intimidated. One of our strengths is our diversity. Over the last ten years, we have become more diverse. I genuinely think if you’d asked people in 2010, “Is London a great city?”, they might not have said yes. Ask them in 2020 and they’ll say it’s the greatest city in the world.’

Learn more about London's past 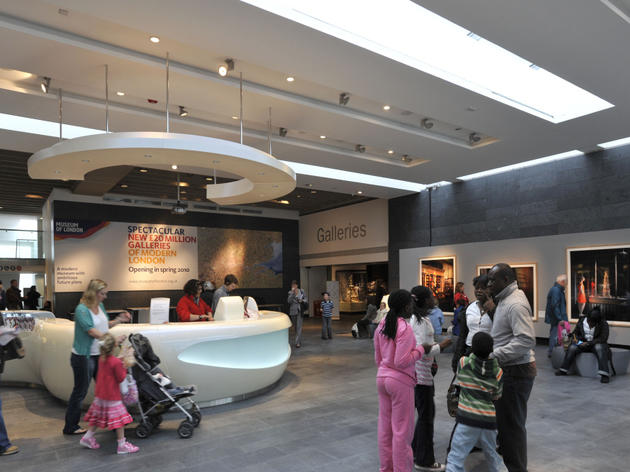 The history of London, from prehistoric times to the present is told in the Museum of London through reconstructed interiors and street scenes, alongside displays of original artefacts found during the museum's archaeological digs. Check the website before your visit as a packed programme of temporary exhibitions, talks, walks and children's events is central to the life of the Museum of London. 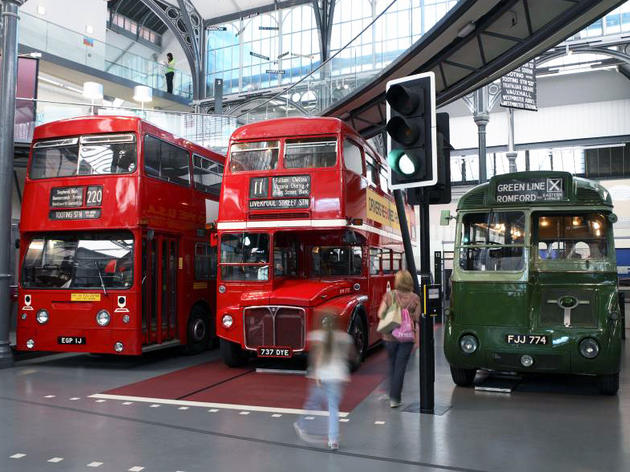 Among the vehicles on display at the London Transport Museum is the first underground electric train, which had no windows because there was nothing to see underground. The trouble was that no one could tell which stop they were at, a glitch resolved by employing an athletic announcer who ran to each carriage at every station, shouting out the stops. Dating from 1890, this is one of several museum exhibits you can board. The design gallery is a tribute to Frank Pick, the man responsible for rolling out the London Underground brand and giving each line its own character. For children, the London Transport Museum has an under-fives play area decorated with Steven Appleby illustrations and the chance to sit in the driver's cab of a red bus and guide a Northern Line simulator through tunnels and up to platforms – (truth be told, it's fun for adults, too). 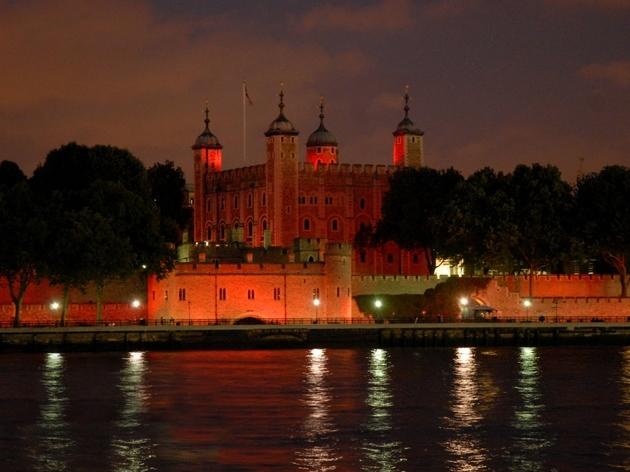 Despite the exhausting crowds and long climbs up stairways, this is one of Britain's finest historical attractions. Who would not be fascinated by a close-up look at the crown of Queen Victoria or the armour (and prodigious codpiece) of King Henry VIII? The buildings of the Tower span 900 years of history and the bastions and battlements house a series of interactive displays on the lives of British monarchs, and the often excruciatingly painful deaths of traitors. There's easily enough to do here to fill a whole day, and it's worth joining one of the highly recommended and entertaining free tours led by the Yeoman Warders (or Beefeaters). Make the Crown Jewels your first stop, and as early in the day as you possibly can: if you wait until you've pottered around a few other things and generally got your bearings, the queues are usually immense. The other big draw to the tower is the Royal Armoury in the White Tower, with its swords, armour, poleaxes, halberds, morning stars (spiky maces) and other gruesome tools for separating human beings from their body parts. Kids are entertained by swordsmanship games, coin-minting activities and even a child-sized long bow. The garderobes (medieval toilets) also seem to appeal. 'Fit for a King' is a showcase for royal arms and armour, including armour created for King Henry VIII on his marriage to Katherine of Aragon. 'Royal Beasts' explores the history of the Tower of London's Royal Menagerie, which was founded during the reign of King 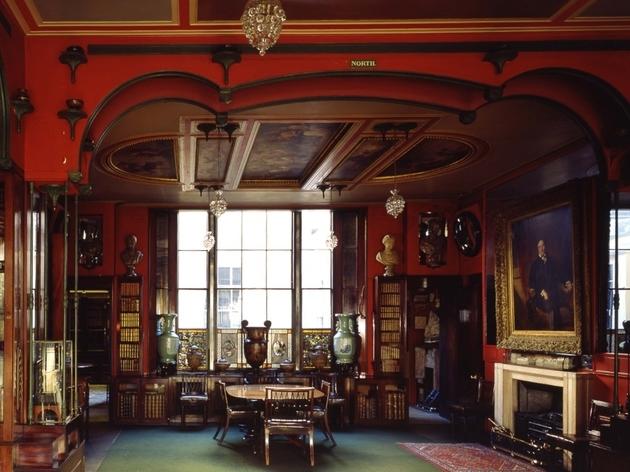 Designed by architect Sir John Soane to house his own collection of paintings and architectural salvage, the museum is a tranquil place full of unexpected treasures, with a wealth of intriguing natural lighting effects best viewed on a bright day. A leading architect of his day, Soane is responsible for the building that housed the Bank of England (only the perimeter remains now). Much of Sir John Soane's Museum's appeal derives from the domestic setting – the Breakfast Room has a much-imitated domed ceiling, inset with convex mirrors, for instance. On the first Tuesday of each month, Sir John Soane's Museum opens late and some parts are lit by candlelight. During the holidays, drop-off children's workshops exploring the house take place. Visitors can now see the Picture Room rehung according to Soane's original arrangement, featuring works by Canaletto and others. The rehang is part of 'Opening Up The Soane', a three-year project to open up areas and aspects of Soane's collection and improve visitor facilities. The first completed phase of 'Opening Up the Soane' is revealed on July 6, 2012, when a restored, Soane-designed house, built and decorated by John and Eliza Soane for their own use in 1792, is opened to the public. The house, Number 12 Lincoln's Inn Fields, is a neoclassical townhouse with elaborate decorations including a 'geometric' staircase, with walls painted to resemble the sooty masonry of a Roman catacomb, two Pompeian-red rooms, one with a ceiling painted li 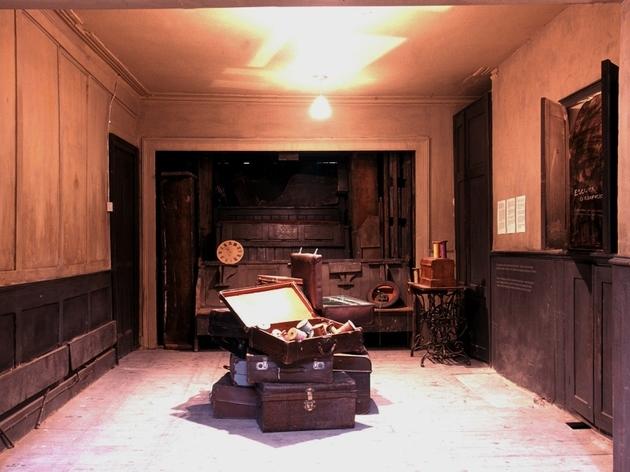 Housed in a Grade II* listed building, an unrestored 1719 Huguenot silk merchant’s home which also contains a concealed synagogue dating from 1869, 19 Princelet Street (also known as the Museum of Immigration and Diversity) is London’s ‘museum of conscience’. ‘Leave to Remain’ is an exhibition of work looking at asylum in Britain, by three contemporary refugee artists. The museum is family-friendly and provides an activity trail for children. ‘Suitcases and Sanctuary’, an exhibition made by children, explores the refugee experience in Spitalfields, from French Huguenot, Irish, Jewish, Afro-Caribbean, Somali and Bangladeshi viewpoints. 19 Princelet Street is only open to the public a few times a year, although it’s sometimes possible to arrange group visits one month in advance. 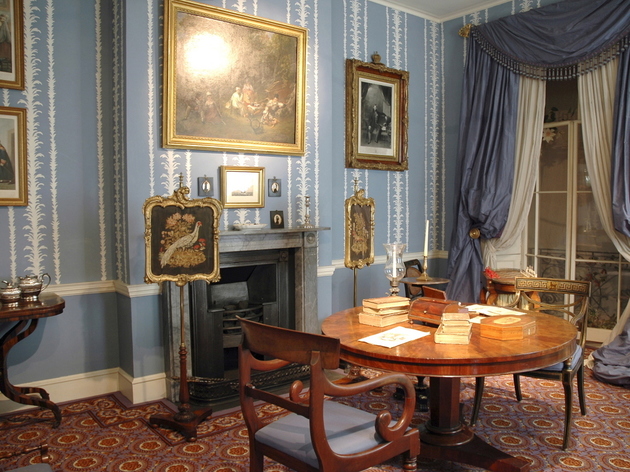 Housed in a set of 18th-century almshouses, the Geffrye Museum offers a vivid physical history of the English interior. Displaying original furniture, textiles and decorative arts, the museum recreates a sequence of typical middle-class living rooms from 1600 to the present. It is a fascinating way to take in domestic history. The Geffrye Museum also has an airy restaurant overlooking the gardens, which include a herb garden and a series of period garden 'rooms' with period seating (open Apr 1 to Oct 31, during museum opening hours). Tours of the restored almshouses take place regularly, as do children's activities and workshops (see the website for details). 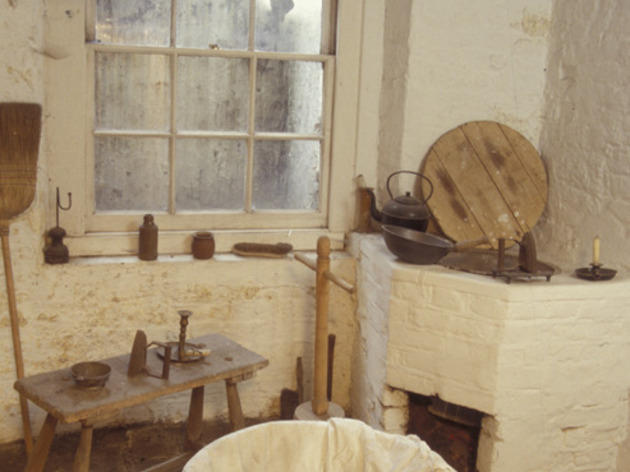 The museum, library and headquarters of the Dickens Fellowship – and the house where Dickens lived from 1837-39 re-opens on December 10, 2012. A mixture of reconstructed rooms and gallery space, the transformed and expanded museum features original Victorian furniture and fittings, newly-opened attics and kitchens and a brand new education centre at 49 Doughty Street. Visitors are taken back in time as they explore and discover Dickens's life through displays of his personal belongings, paintings and his writing. 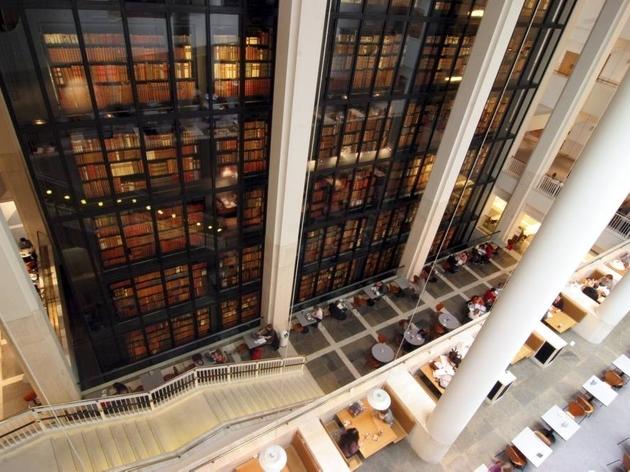 The John Ritblat Gallery houses some of the most famous written and printed items in the world: the Lindisfarne Gospels, Shakespeare’s first Folio, Handel’s Messiah, the Gutenberg Bible, drafts of the Magna Carta and the Beatles’ manuscripts. The Workshop of Words, Sound and Images is a hands-on gallery that traces the story of book production from the earliest written documents through medieval manuscripts and printing to modern industrial processing and the digital revolution. Two CD jukeboxes in the entrance hall enable visitors to listen on headphones to a selection of items from the library’s sound archive, including extracts from Nelson Mandela’s ‘Rivonia’ trial speech in 1964, which led to his imprisonment for 27 years. 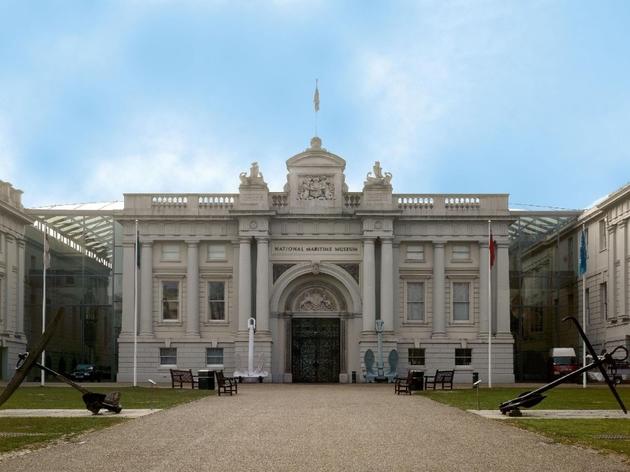 On this Greenwich Park site you'll find the National Maritime Museum, the Queen's House, which was designed in 1616 by Inigo Jones but not completed until 1638, and the Royal Observatory, founded in 1675 by Charles II. The museum's Maritime London gallery is a permanent exhibition exploring the importance of London's maritime heritage and its impact on world trade. Exhibits include wreckage from a Zeppelin shot down over the Thames estuary in 1916, the original model for Nelson's Column and early 19th-century plans for the Rotherhithe Tunnel. Exhibits in the museum's Your Ocean gallery, which is aimed at families and teenagers, examine current issues affecting marine conservation, including global warming, over-fishing and pollution. The Time Galleries in the Observatory map the quest of astronomers, horologists who attempted to pin down the elusive concept of time. The Cradle of the Navy: The Royal Hospital School at Greenwich is a permanent display in the Queen's House on the school's origins and life at Greenwich, where it occupied the building now used by the museum from 1806 to 1933. The £15 million extension features six astronomy galleries, a science and astronomy education centre, and a working horology centre. The centrepiece of the project, which almost doubles in size the Observatory areas open to the public, is the 120-seat Peter Harrison Planetarium – the only public planetarium in the UK, it features daily shows (admission charge applies), including 'Sky tonight