London is a brilliant, invigorating, ever-changing place... but sometimes you really need a breather. When the villagey vibes of Barnes or Hampstead just won’t cut it, it might be time for a day trip to one of the many picture-perfect English villages located in the Home Counties and beyond. Here are ten of the prettiest ones we could find, taken from the book 'Escape London' by Yolanda Zappaterra. You may have experienced their period charm in a film or TV show, but nothing beats a leisurely stroll through their winding streets followed by a well-earned (ahem) pint in a proper village pub. 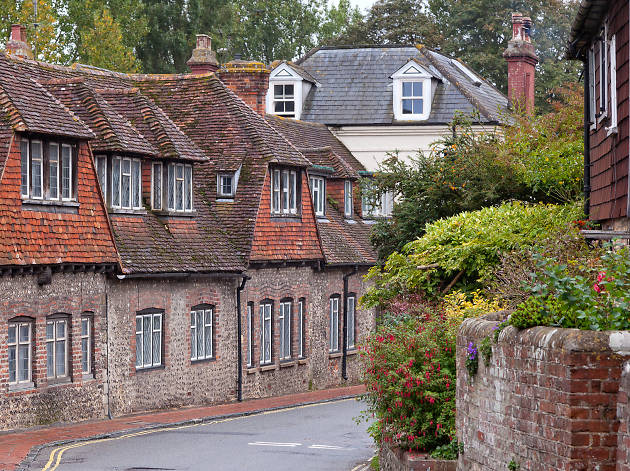 Alfriston is a real walkers’ delight, set as it is in the beautiful Cuckmere River valley and with the South Downs Way going through it. But you could do no more than walk around the village and still have a great day out; highlights include the fourteenth-century thatch-and-timber Clergy House (the National Trust’s first purchase, in 1896), the lovely St Andrew’s church, from the same period, and the village green it’s set on (the Tye) – perfect for a picnic. End your day with a pint or two at the obligatory Tudor-style inn, the Star. Back in the early Twentieth-Century, Alfriston so captivated author Eleanor Farjeon that she wrote the classic hymn 'Morning Has Broken' (later recorded by Cat Stevens) while staying here.

Get there: Trains run from London to Polegate or Lewes, taking about 1hr 15mins. From both, the 125 bus reaches Alfriston in about 15 minutes. By car, it’s 80 miles from central London. 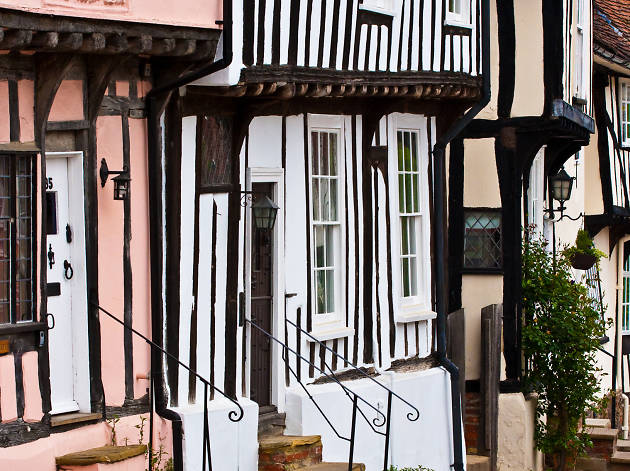 A visit to this Suffolk village, which gained its market charter from Henry III in 1257, offers a perfect picture of prosperous medieval England, thanks to its high street of half-timbered houses and more than 340 listed buildings. The lime-washed and brightly coloured buildings are a delight, with standouts including Corpus Christi Guildhall and the De Vere House, which starred in ‘Harry Potter and the Deathly Hallows’. The richly decorated fifteenth and sixteenth-century St Peter & St Paul Church dominates the village with its soaring 141ft tower.

Get there: Trains run from Liverpool St to Sudbury, seven miles away, taking about 1hr 20mins. From there, the 753 bus runs to Lavenham. By car, it’s 76 miles from central London. 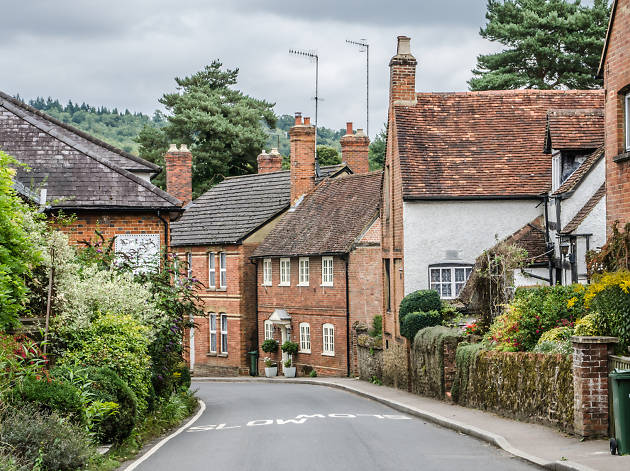 Surrey has a ridiculous number of swoonsome villages to choose from, but we’ve plumped for Shere because, with its riverside setting and super-cute cottages, it’s as quintessentially English as a bulldog in a bowler hat. Its churches (St James’s Church), manor houses (Manor House Lodge, designed by Edwin Lutyens), pubs (the fifteenth-century White Horse) and general chocolate box loveliness have starred in heaps of British movies, including ‘A Matter of Life and Death’, ‘Bridget Jones – the Edge of Reason’, and ‘Four Weddings and a Funeral’ – so watch out for lighting rigs and A-list actors as you go about your strolling.

Get there: Trains run from Waterloo to Gomshall, with a change at Guildford, taking about an hour. From there, it’s a 30-minute walk to Shere. By car, it’s 35 miles from central London.

Humans and animals alike are drawn to this idyllic spot. On any given day you might catch a wild pony wandering down Brookley Road, or glimpse a deer in the woodland, or see donkeys grazing on the green, and if it’s been raining heavily, even find your route blocked by cows wandering through the flooded streets of the village. Plus, where else would you find a beach in the heart of a forest? Just out of town outside the Balmer Lawn Hotel, the small sandy Brockenhurst Beach, on the banks of the stream that runs through the heart of the village, is perfect Cornetto-scoffing territory. Neighbouring Beaulieu is an equally pretty spot which is home to Palace House, an imposing Thirteenth-Century pile, and the National Motor Museum.

Get there: Trains run frequently from Waterloo to Brockenhurst, taking about 90 minutes. By car, it’s 90 miles from central London. 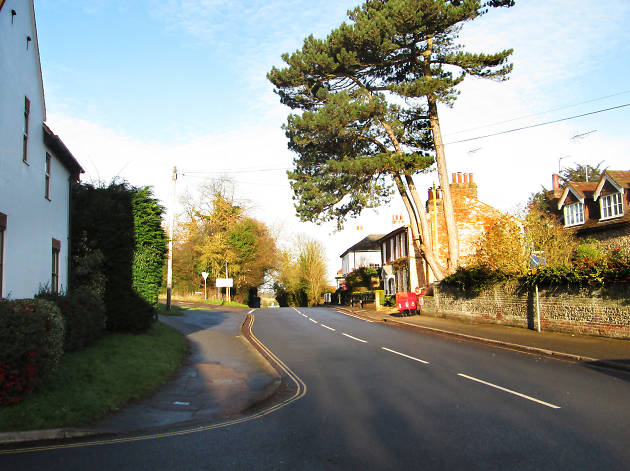 The home and workplace of Roald Dahl has changed little since the storyteller’s arrival here 70 years ago, its cobbled alleys and handsome high street still taking in Gipsy House, where he lived, and many of the sites that inspired his stories. The easy charm of the large village, established in the late Middle Ages as a major stop on the coaching route between London and the Midlands, coupled with its setting in the pretty Misbourne river valley, makes it hugely appealing whatever your age. Great Missenden's good looks have been heavily featured in ITV's 'Midsomer Murders' over the years, though in real life it's obviously a perfectly safe place to stroll around and explore.

Get there: Trains runs from London Marylebone to Great Missenden, taking about 45 minutes. By car, it’s 38 miles from central London. 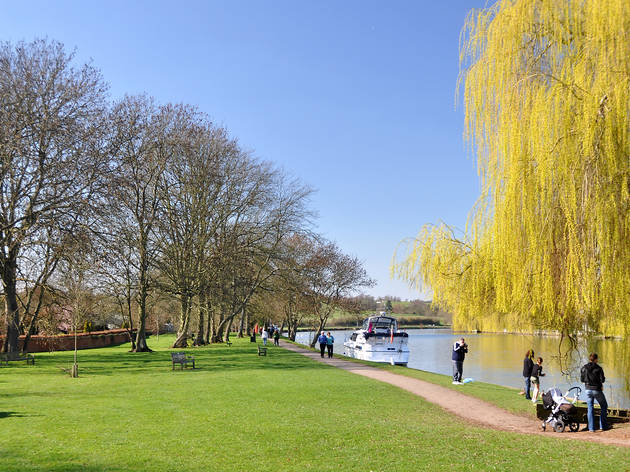 Exploring the places that inspired an artist is always interesting, and doing it in as pretty a spot as Cookham is a rare delight. Sir Stanley Spencer lived here for most of his life, and painted many of the village’s features. It’s easy to see why. Cookham has lots to offer, including the church of the Holy Trinity, where Norman features are still visible and the cherry orchards at Cookham Dean, which was once home Wind in the Willows author Kenneth Grahame. Further afield, Enid Blyton’s childhood home at Bourne End makes a nice three-mile round walk from the village; Bray, home to Heston Blumenthal's world-famous restaurant The Fat Duck, is just four miles away.

Get here: Trains run from Paddington to Cookham, with a change at Maidenhead, taking about an hour. By car, it’s 30 miles from central London. 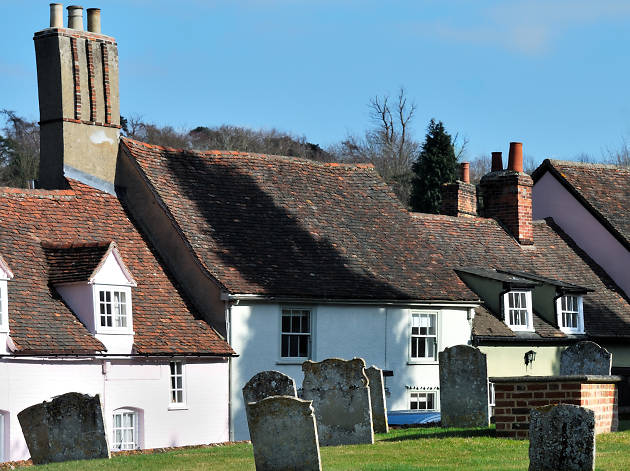 Close to the more famous Constable Country in the equally lovely Colne Valley, pretty Castle Hedingham has far fewer tourists and something just as winsomely picturesque in the 150-year-old Colne Valley Railway, which, at just one mile, must surely qualify as one of the shortest lines in Britain. So if you like your half-timbered coaching inns and high streets backed by steam trains puffing through green fields in the distance, this is the place for you. Oh, and the Norman church and castle are pretty special too.

Get there: Trains run from Liverpool St to Braintree, eight miles away, taking about an hour. From there, the 89 bus runs to Castle Hedingham. By car, it’s 64 miles from central London. 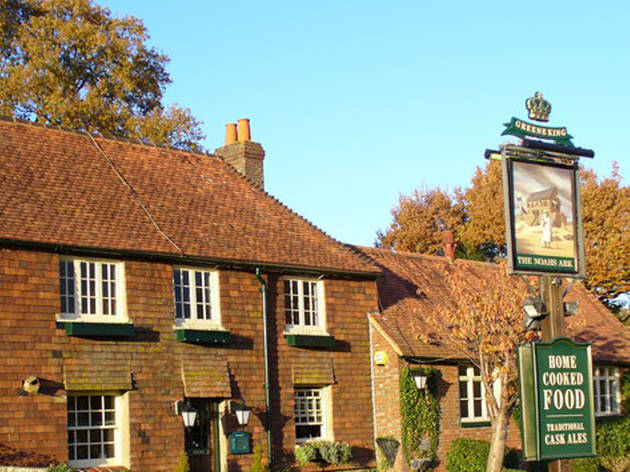 On a summer’s day, the thwack of willow on leather on Lurgashall village green makes a fine accompaniment to a pint outside the sixteenth-century Noah’s Ark inn, but there are plenty of other pleasures here. Wander at will and you’ll come across picturesque half-beamed cottages, a watermill, a beautiful row of village green cottages, and, a 15-minute walk west along Dial Green Lane, even a winery selling mead, honey, gin and raspberry liqueur.

Get there: Trains run from Waterloo station to Haslemere, taking about an hour. From there, it’s two buses or a short taxi ride to Lurgashall. By car, it’s 50 miles from central London. 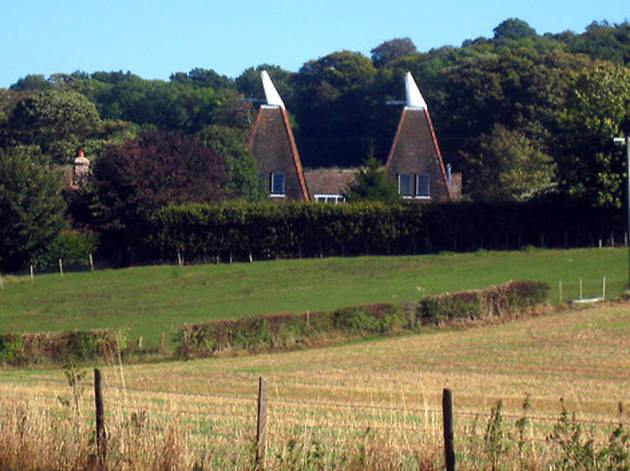 Overlooking a bend on the chalk downs above the river Stour, the village of Chilham is as pretty as they come. Much of its architecture dates back to medieval times, with the best of it to be found around the elegant village square. Standouts include the beautiful fifteenth-century timber-framed houses on its north side, St Mary’s church (whose tower offers great views of the surrounding countryside and Canterbury Cathedral, six miles away) on its east side, and the entrance to the grounds of Chilham castle on its west side. White picket fences, perfectly clipped cottage gardens and quaint tearooms and pubs complete the picture-postcard appeal.

Get there: Trains runs from St Pancras to Chilham, with a change at Ashford, taking about 1hr 30 mins.  By car, it’s 60 miles from central London. 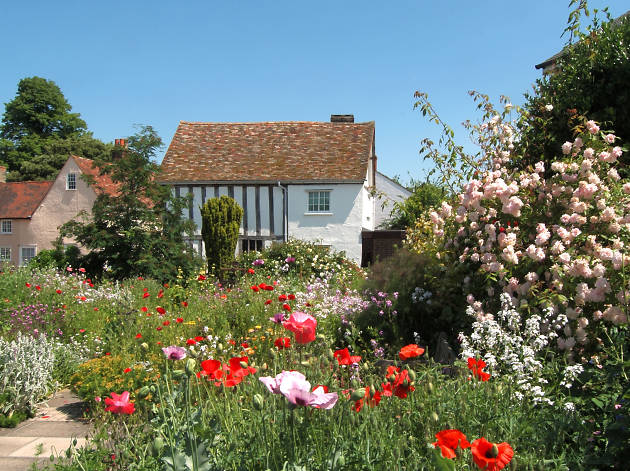 Human habitation can be traced back 4,000 years in Ashwell, proving that Bronze Age man was just as adept at finding a top slice of country life as commuter-belt man. Ashwell Springs makes a great picnic spot, but before you break out the wicker basket, make sure to explore the fourteenth- and fifteenth-century Forester Cottages on the high street and the sixteenth-century timber-framed cottages at the junctions of Rollys Lane and Mill Street. For more modern architecture fans, Victorian residence the Bury, designed by Edwin Lutyens with a garden by Gertrude Jekyll, won’t disappoint.

Get there: Trains run from King’s Cross to Ashwell and Morden, taking about an hour. By car, it’s 45 miles from central London. 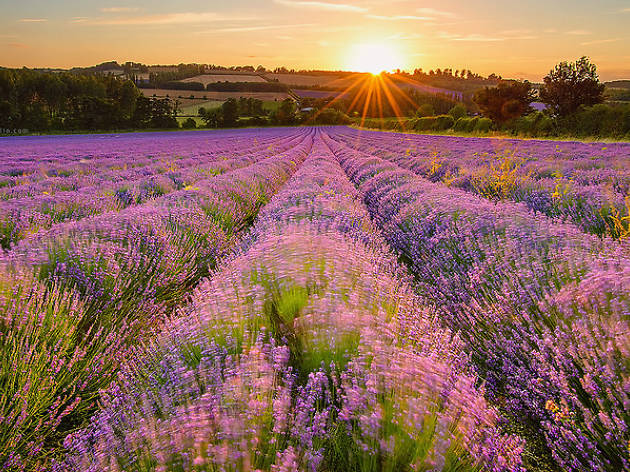 Now lockdown is easing a little we can ditch the city for a (little) bit with one of these great day trips, covering everything from beaches and wild swimming to quaint country pubs.