Getting along with your flatmates is a necessity in a city where a future of shared living is on the cards for the majority of us. Since we're in this for the long haul, our relationship with our flatmates can be more important than with our friends or partners.

Many Londoners have found numerous ways to make a life for themselves at home with their flatmates whether they have different political views, have struggled to find a decent house, or barely see each other. Read on to see how these London flatmates get along.

On the hunt for a new flat? Here are some of the best places to live in London. 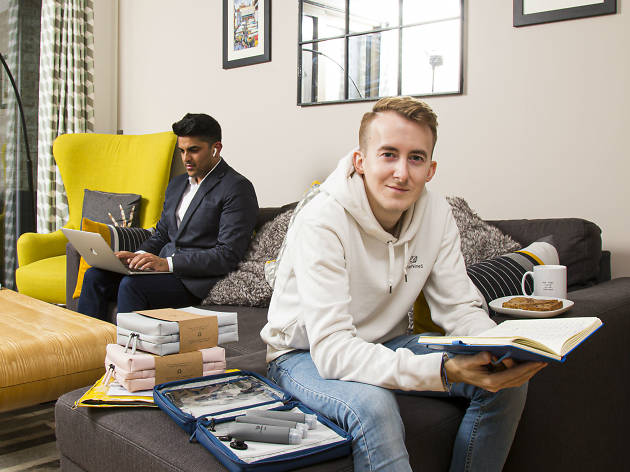 Alex: ‘Ravi works long hours and relies on takeaways for his dinner, but I’m always in the kitchen trying to make cheap meals. Ravi’s culinary skills are... limited.’

Alex: ‘You can tell the difference on a night out, too. I’ll have a couple of beers and head home, but Ravi will drop £100 on dinner and stay out late.

Ravi: ‘Things have just worked out differently for us. Alex has put all his spare cash into building his business.’

Alex: ‘We still split bills evenly. Ravi’s very much a City boy, but I know he works long hours for his wages.’

Ravi: ‘I voted for the Tories in the general election, because I wanted to pick a party with a strong stance on leaving the EU.’

Alex: ‘The fact that we voted differently doesn’t harm our relationship – we agree to disagree. I voted LibDem because I wanted us to stay in the EU. But Ravi and I have never argued over it.’

Ravi: ‘If we’re watching the news and something about Brexit or politics comes up, then we’ll chat about it between us. We have differing views but there’s no tension. At the end of the day, he’s my best mate and I love living with him.’

Alex: ‘We’ve been through a lot together, including break-ups. We’ve seen each other at our best and our worst and we’re always there for each other.’ 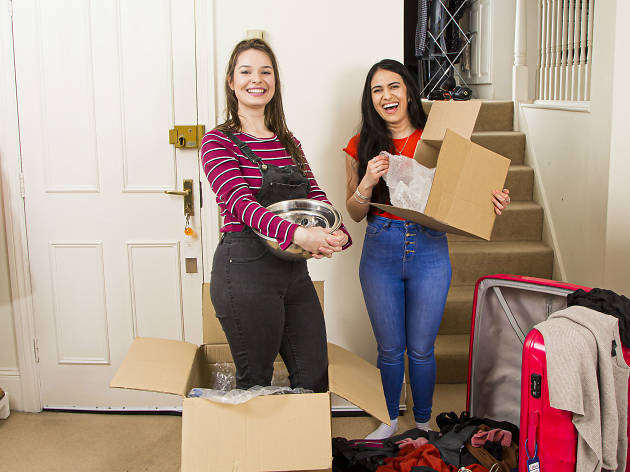 Hammersmith: Chantelle (left) and Jacinta, both 28, have moved flats together five times over the past year

Jacinta: ‘The first place we moved into wasn’t great. You’d be in the shower and suddenly the water would turn freezing cold.’

Chantelle: ‘And the rent included bills, so the landlord would keep the boiler locked up so that we couldn’t adjust the heating. We were shivering.’

Jacinta: ‘We eventually got two rooms in a four-bedroom place. But one day a pipe burst in the ceiling above my room. My bed was soaked.’

Chantelle: ‘They had to redo the roof so we had to move again. We ended up moving five times in one year.’

Jacinta: ‘It’s been so stressful.’

Chantelle: ‘But now we live in a lovely place. It’s just us two and we’re much happier. We know when the other one needs space. Like if Jacinta is on her period I’ll give her a wide berth.’

Jacinta: ‘I don’t think I could have coped without Chantelle. She’s been the most consistent thing in my life.’ 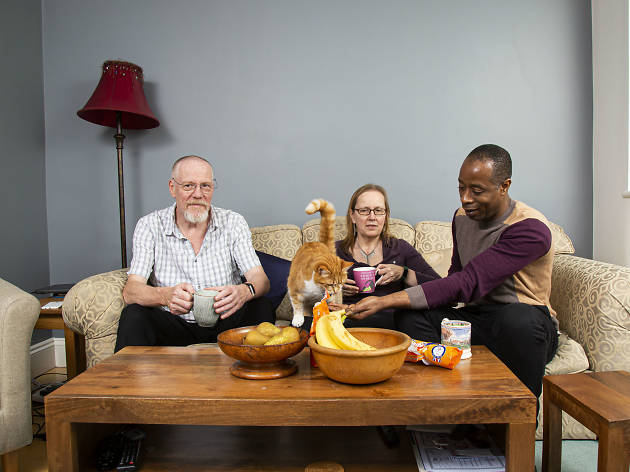 Mohammed: ‘At the moment I am not allowed to get a job, so I am grateful to Guy and Julia because if it wasn’t for them I’m not sure whether I would have somewhere to stay.’

Guy: ‘We met through the charity Refugees at Home. There are several points in the asylum application process where refugees can suddenly find themselves without a place to live and the charity was created to fill that gap. A lot of refugees end up sleeping rough.’

Julia: ‘We watch a lot of TV together. Last week it was “The Crown”, it led to an interesting conversation about the monarchy.’

Guy: ‘Since Mohammed has moved in with us, we have learned a lot about the political situation in Sierra Leone. We find ourselves much more interested in other cultures.’

Mohammed: ‘Where I lived before I was eating a lot of meat and oily foods. But because Guy and Julia are vegetarians, I eat a lot of vegetables now. Wherever I end up I will take that with me.’ 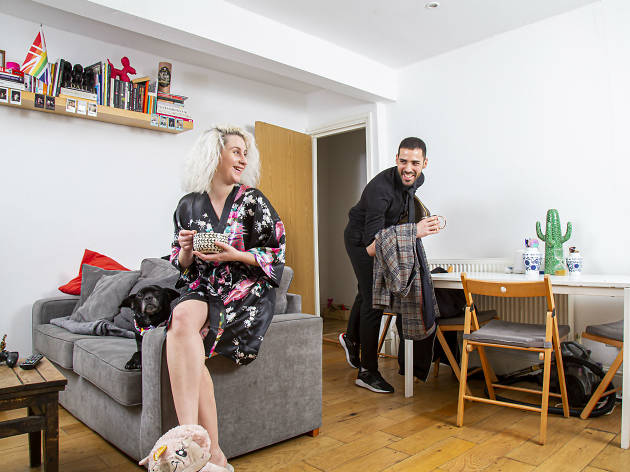 Holloway: Waitress Candice, 30, and business manager Rafael, 28, work shifts that mean they never see each other

Rafael: ‘I work in retail while Candice works evening shifts as a waitress at Hawksmoor. Often, by the time she gets back from work I’m asleep and in the morning when I’m getting ready for work, she won’t actually be up yet.’

Candice: ‘Though I miss Rafael, I like living somewhere where I get a lot of time to myself. We both work in central London and we’re both dealing with customers all day, so it’s nice to come back to a quiet, empty house.’

Rafael: ‘When I haven’t seen her for a while I worry about her. Although I always know when she’s been in because she leaves half-filled water cups and makeup brushes everywhere.’

Candice: ‘It can get hard, but there are ways to show you care even if you’re absent. After I didn’t see Rafael for two weeks I bought him a plushie and a card; another time I got him cookies.’

Rafael: ‘I’ve lived in busy houses and I didn’t like it. People make small talk in the kitchen even when it’s obvious neither of you are in the mood for socialising. It didn’t feel like home. Wherever Candice is feels like home... even if I don’t see her much.'

John and I were friends for ten years before we became flatmates. We found a flat that I loved from the start. It’s quiet and the rooms are big and airy. It’s also close to central, as well as next to my favourite yoga studio.

It all went wrong when John got a new girlfriend half his age. Immediately I felt like a gooseberry. They’d have loud sex all the time, so I began staying out with friends late into the night to get away from it.

With her, everything is a drama – she’s always arguing with someone. As she’s 20 years younger than me, we don’t have much in common, and I don’t want to be drawn into her histrionics – I had enough of that years ago. But John seems blind to it.

I feel like I’m living in their love nest, and a few weeks ago, when I was hoovering the living room, I found a pair of her knickers underneath the rug. The fact that they’re having sex in the living room when I’m out makes me feel like I don’t belong in my own home and that’s horrible.

When I’ve tackled John about it, he tells me that I’m the one with the problem. I don’t want to leave the flat, because I don’t think I’ll find one this nice. So for now, I’m hanging on in there, and praying they move out together, but the wait is killing my soul.

Names have been changed. 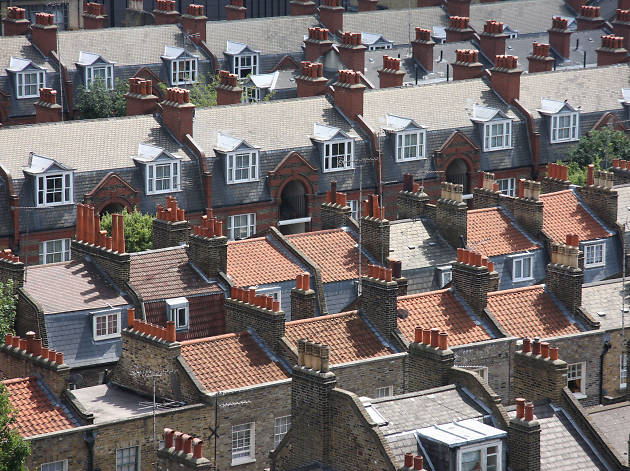 It’s no secret that London’s rent prices are astronomical, so any discount scheme for tenants would be common knowledge, surely? 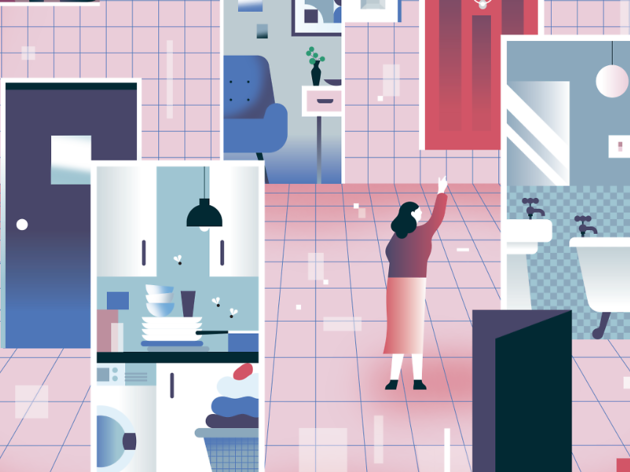 Renting is one of the great inevitabilities of life in our heaving metropolis. But advances in tech, ambitious London-based start-ups and changes in consumer demand are altering the process of renting to such an extent that it could be entirely different in ten years’ time.