Don your best Hawaiian shirt, tuck an umbrella behind your ear and channel the tropics with the best mai tais in LA

As synonymous with tropical holidays and weekend getaways as it is with hellish hangovers, the unapologetically strong and sweet mai tai first burst onto the LA bar scene with the explosion of tiki culture in the late 1950s. While the mai tai as we know it was invented in 1944 by Trader Vic, cocktail history nerds will point out that the recipe was inspired by (or stolen from, depending who you ask) Don the Beachcomber’s QB Cooler, a 1933 concoction made with two rums, lime juice, honey, falernum, bitters and ginger syrup. A later adaptation by the Royal Hawaiian hotel added pineapple juice, orange juice and lemon juice to the mix. Today, most bartenders use Trader Vic’s recipe as the classic standard: two types of rum, lime juice, orange curacao and orgeat syrup, though not all are willing to divulge their exact formula.

Despite their shared ingredients, however, no two bartenders’ mai tais are completely identical, and in LA, you don’t have to go to a tiki bar or a dive bar to find a good one. Whether you’re in the mood for an island rager or an understated imbibing experience, our list will help you find the mai tai that is your tai.

RECOMMENED: A guide to cocktails in Los Angeles

Where to find the best mai tais in LA 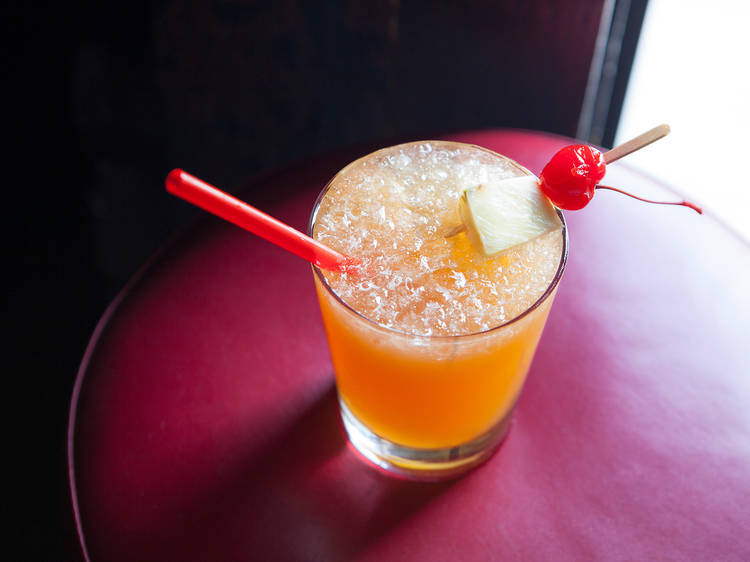 An unquestionable LA institution, the kitschy, closet-sized Tiki-Ti has its own page in the contentious book of tiki history. Founded by Ray Buhen, a former employee of the original Don the Beachcomber, Tiki-Ti does its mai tais Ray’s way—and that’s about as much as they’re willing to disclose. Based on a vague description specifying that it contains “various rums and juices,” we can speculate that it may be a hybrid of Don the Beachcomber’s QB Cooler and the Royal Hawaiian-style mai tai. The bar is now run by Ray’s son and grandson, one of whom will either be making your mai tai, checking your ID or toasting to the Tiki-Ti founder at 9pm every Wednesday, when regulars practically run the place. 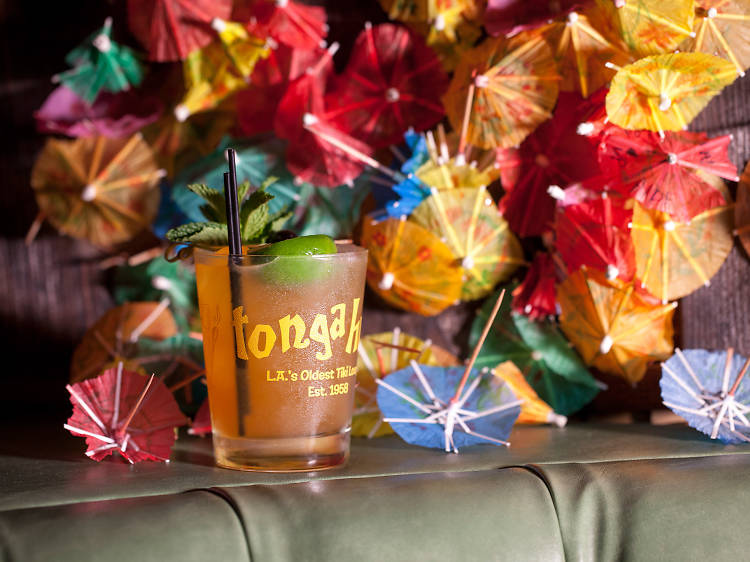 No mai tai pilgrimage would be complete without a trip to Tonga Hut, which calls itself LA’s oldest tiki bar and supplies some of the finest (and strongest) mai tais in the city. Surrounded by bamboo, grass-thatched booths and Polynesian atomic kitsch, you’ll feel like you’ve taken a time travel vacation to a midcentury oasis in a less-than-magical part of North Hollywood. Tonga Hut’s mai tai adheres to the Trader Vic’s recipe, but if rum isn’t your spirit, a whiskey version is available in the form of a Honi-Honi. Both are potent enough to knock you back to the 1950s. 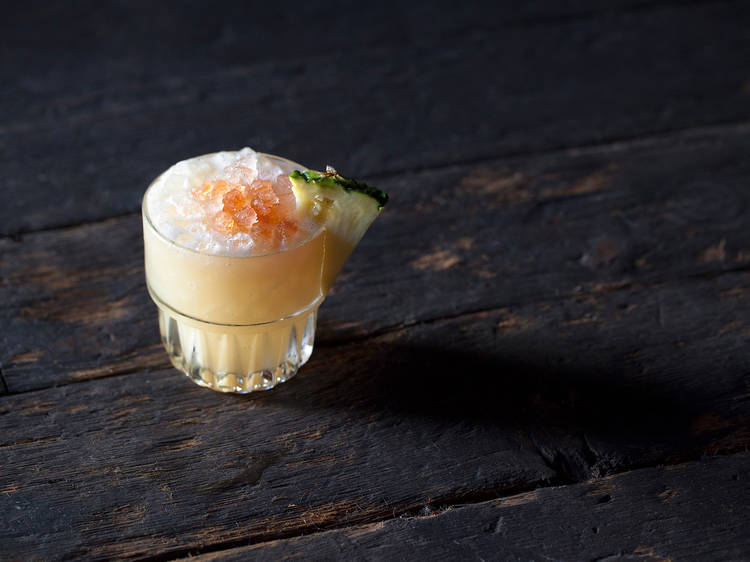 With an old-timey decadence that’s more Deep South than South Pacific, Hollywood’s Sassafras Saloon may at first seem an unlikely home for a great mai tai, but when you consider the South’s affinity for strong, sweet beverages, it makes perfect sense. Alongside Vieux Carrés and Sazeracs, Sassafras’s mai tais are barrel-aged before being stored in and dispensed from glass bottles hanging above the bar. The barrel imparts a subtle oakiness to the combination of El Dorado 12-year, Atlantico Platino and Pierre Ferrand Dry Curaçao, which is enhanced by housemade orgeat and creole shrub that lends a New Orleans twist to this tiki tipple. 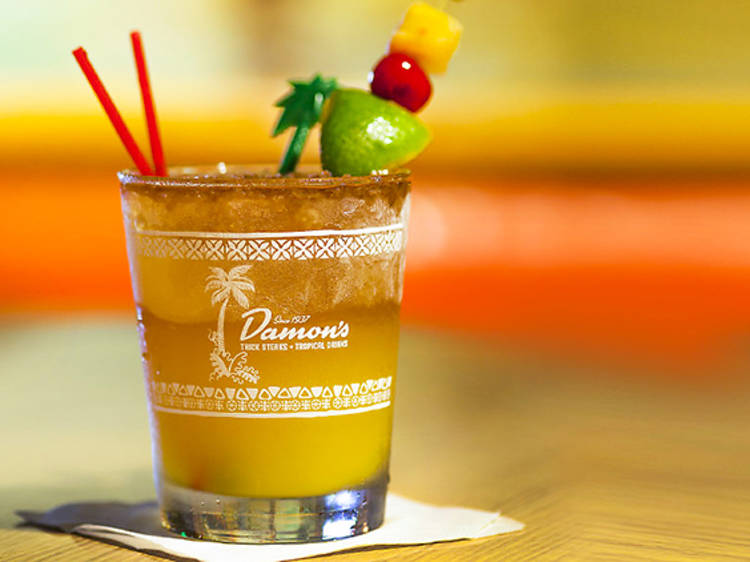 The mai tais at this Glendale tiki-themed steakhouse have been inebriating locals since long before Uber or Lyft existed, but trust us, you’ll need one. Unchanged since the restaurant’s opening in 1937, Damon’s mai tai recipe is closely-guarded, with one bartender listing only an ominous-sounding “secret sauce” as a key ingredient. We can hazard a guess that there is rum in these, and lots of it. These mai tais are nothing fancy, but while some contemporary cocktail enthusiasts may turn their nose up at the notion of a maraschino cherry garnish, they’re good, they’re strong and at $7 (and $5 during happy hour), they’re fine by us. If you’re having more than one, you can line your stomach the way your grandpa did—with a thick steak and a baked potato. 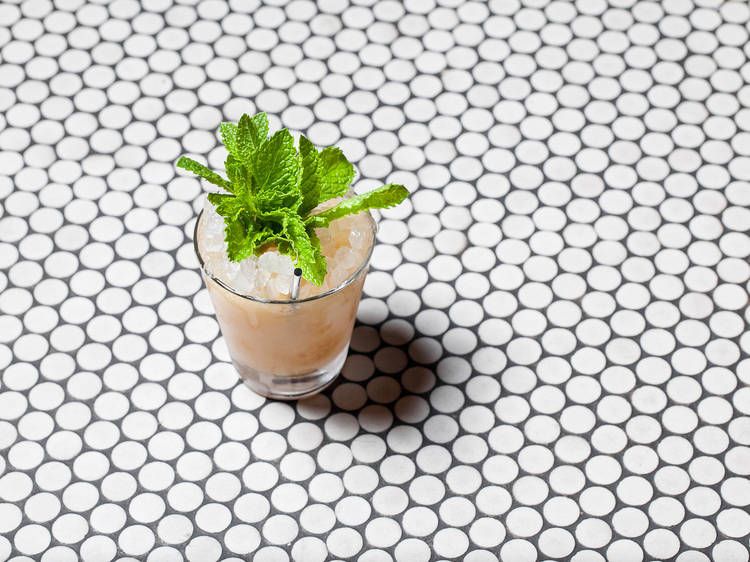 Mai Tai at the Varnish

Honestly, is the Varnish ever not the place to get the perfect anything? Hidden in the back of Cole’s Original French Dip in Downtown, this dark, intimate speakeasy has proven itself to be not just a master of innovative bespoke cocktails, but of just about any cocktail that has ever been made—and its mai tai is no exception. It’s not on the menu, but don’t worry—when you ask, the servers will confidently assure you that they not only still make it, but it’s the best in town. We’re not sure we can disagree. While the bartenders adhere to the classic recipe, using top shelf Jamaican and Martinique rums, orange curaçao and fresh lime juice, the secret might just be in the Varnish’s housemade orgeat, which lends the drink a vibrant, full-bodied flavor without syrupy viscosity. Hot tip: If you’re feeling peckish but don’t want to lose your chance at a coveted table, you can order a French dip in Cole’s and they’ll deliver it to the back bar. 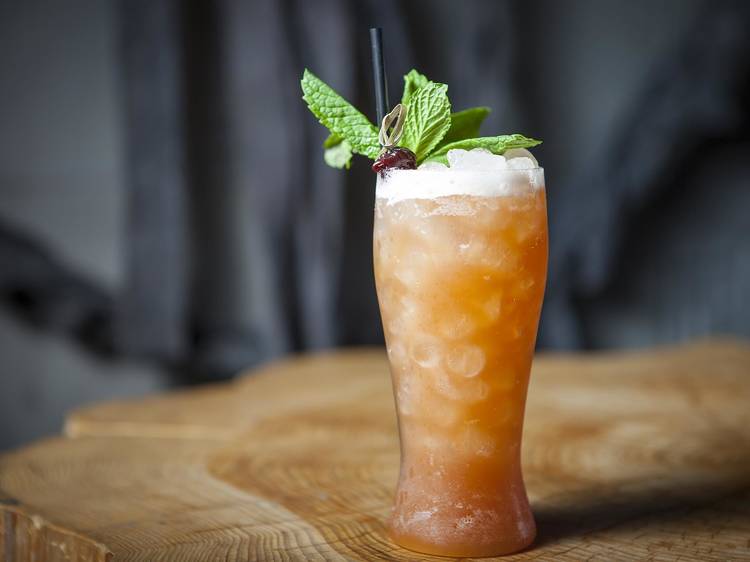 Let’s be truthful: if a mai tai doesn’t contain any rum, can you still call it a mai tai? The Kentucky Mai Tai at Upstairs at Ace Hotel goes off-script completely, swapping the core spirit for a combination of bourbon, mezcal and pêche de vigne peach liqueur, and finishing it off with orgeat and angostura bitters. The result is a smoky, sultry taste of the tropics that pairs excellently with the rooftop venue’s modern oasis vibe and sexy Downtown views. It may not be your mainstream mai tai, but it certainly evokes a mai tai state of mind—especially if you’re enjoying it poolside. 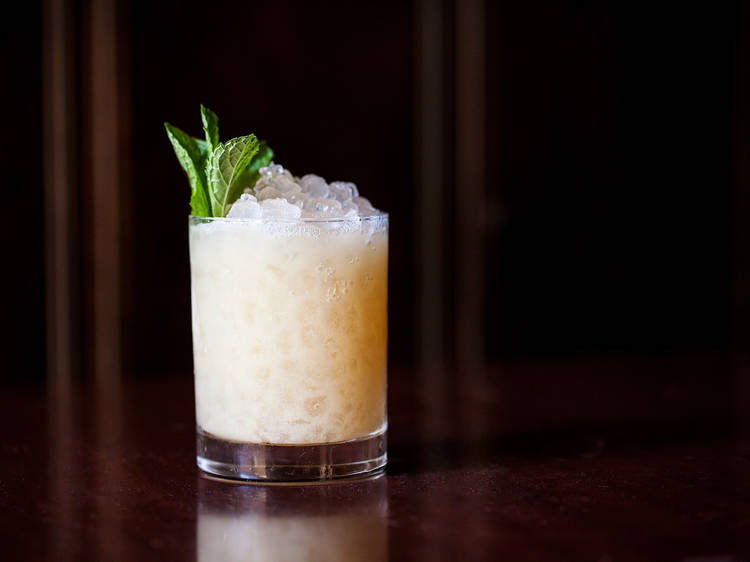 Caña Rum Bar is a treasure trove of rum, with more than 250 varieties lining its sultry shelves. So it would be a travesty if the Downtown bar, which requires a yearly membership of $20, didn't serve a quality mai tai. Good news: It serves a great one, and sometimes you can even sweet talk your way through the doors to try the tropical drink without a membership. Made with Appleton Estate 12-Year rum, Rhum JM Gold, orgeat, curaçao and fresh lime, it's a classic recipe meant to be enjoyed slowly—maybe by the fireplace as cigar smoke wafts through the air, or while tucked into one of Caña Rum Bar's sleek leather booths.
Read more 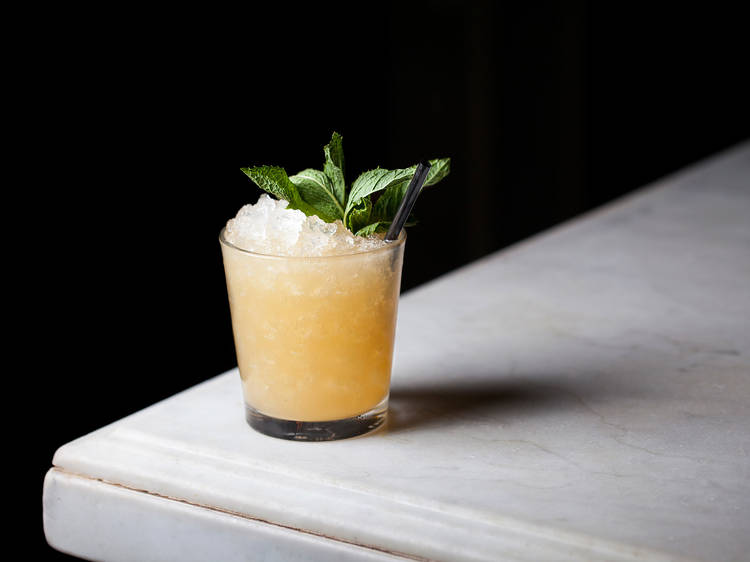 Cuba may be known more for mojitos than mai tais, but that doesn’t stop this Havana-themed Hollywood speakeasy from making an excellent off-menu iteration. While the bartenders don’t make their own orgeat, they do opt for a high-quality, locally-produced alternative courtesy of Liquid Alchemist. On its own, it tastes a lot like liquid marzipan, but as a component in La Descarga’s traditional mai tai, it adds a delicate, almost toasty sweetness that balances out the rhum agricole, Jamaican rum, curaçao and lime and refreshes without overpowering. Served over crushed ice and garnished with a simple sprig of mint, it’s the perfect thing to cool you off when the Cuban burlesque show starts to heat things up. 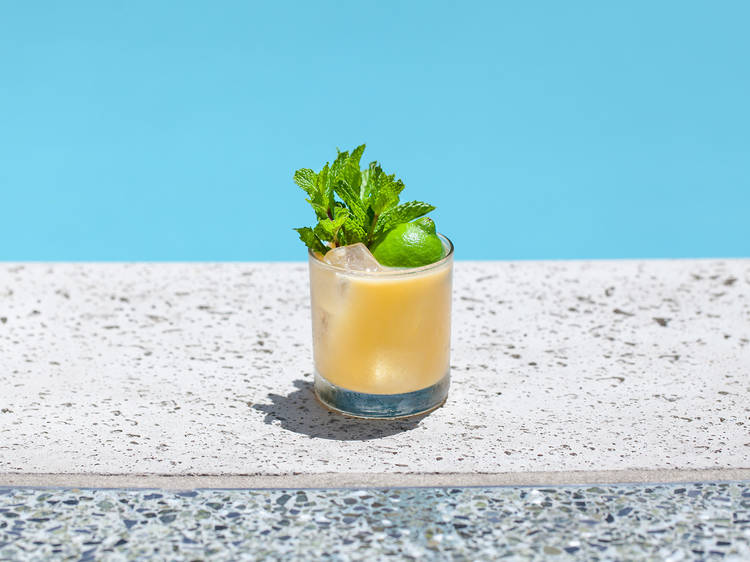 If hopping on a plane bound for the tropics isn't a viable option, sipping on one of beverage director Ryan Wainwright's mai tais by Viviane's aquamarine pool is a pretty solid runner-up. The drink, which is by request only, uses both a French-style agricole Rhum J.M. Blanc and an English-style Hamilton Guyana Rum, along with Pierre Ferrand Dry Curaçao, housemade orgeat and fresh lime juice. Order it during weekend brunch, perhaps, or while taking a nighttime dip—it's your vacation, after all. 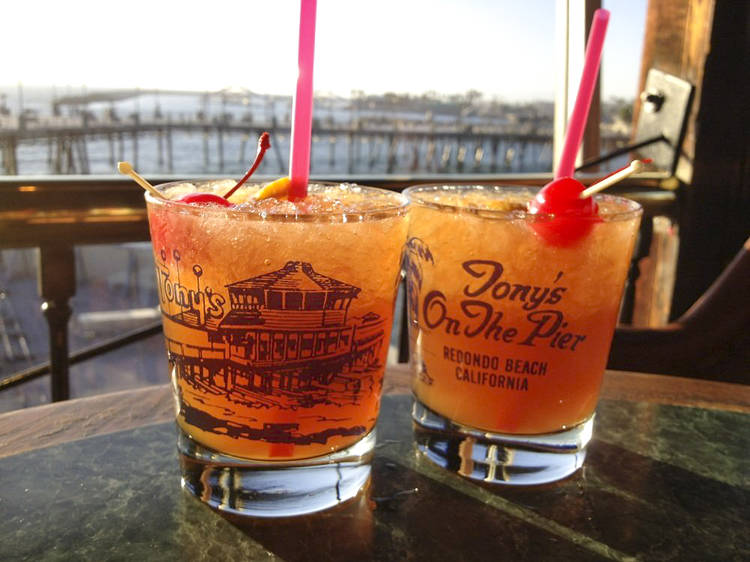 Tony's Famous Mai Tai at Tony's on the Pier

Drinks by the ocean, crab stuffed shrimp, old-school kitsch—there's plenty to make Tony's on the Pier a worthwhile destination, even for those who don't live in the South Bay. Known to some as Old Tony's, the seafood joint on Fishermans Wharf serves Tony's Famous Mai Tai, a mix of both white and dark rum—plus all the other usual suspects—served in a double old-fashioned souvenir glass and garnished with a maraschino cherry. Looking to go a little harder? Order the Fire Chief, a traditional mai tai with the added bonus of a splash of Grenadine and a shot of 151 Rum on top. Time it right and you'll finish your last sip as the sun dips below the Pacific.
Read more
Order delivery
Show more

How to make a mai tai

How to make a mai tai

Learn how to make one of our favorite tiki drinks: the mai tai.