7 hikes in L.A. that lead to hidden relics of local history

Explore an abandoned mine, the ruins of a mountain resort or a bridge to nowhere.

Exercising in the open air no matter the time of year should be enough of a reward in itself, but we Angelenos tend to expect some sort of payoff waiting for us at the end of a hike. Whether a waterfall or dramatic views, having something spectacular to shoot for makes all of the uphill huffing and puffing just a little bit easier.

There’s a whole other category of hikes, though, with way more unexpected landmarks awaiting you at the end. They’re proper headscratchers, occupied by the kind of relics that make you wonder, wait, what is this doing here? Whether to an abandoned mine on the side of a mountain or a decommissioned missile site above a Valley suburb, these seven hikes lead to sort-of-secret spots steeped in L.A. history. 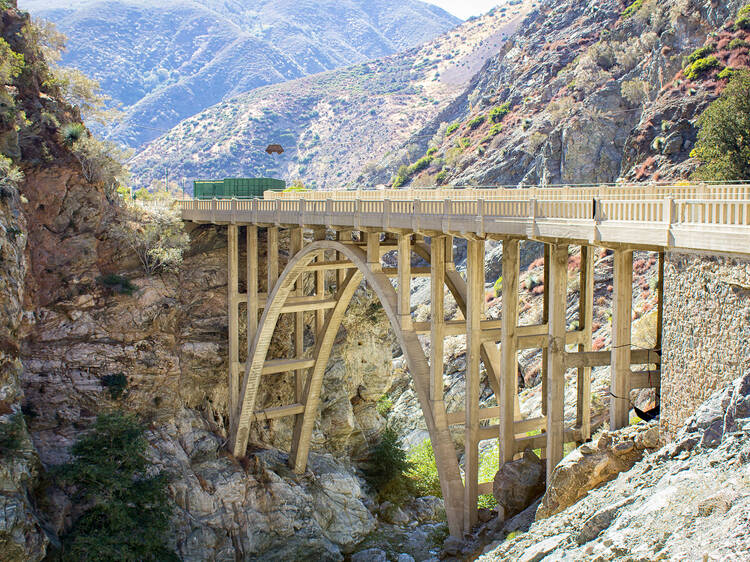 The stranded Bridge to Nowhere

Trek into the wilderness north of Azusa and you’ll eventually come upon this 1936 bridge that leads to, well, nowhere. Part of a never-completed mountain road network that was canceled due to a destructive flood, the arched span has become a popular spot for bungee jumpers and intrepid hikers.

Its foot traffic is actually kind of surprising given just how remote it is: You’ll have to commit to a 10-mile round-trip hike from the Camp Bonita Road trailhead with about a half-dozen river crossings along the way. Since the parking area is within Angeles National Forest, you’ll need an Adventure Pass ($5). 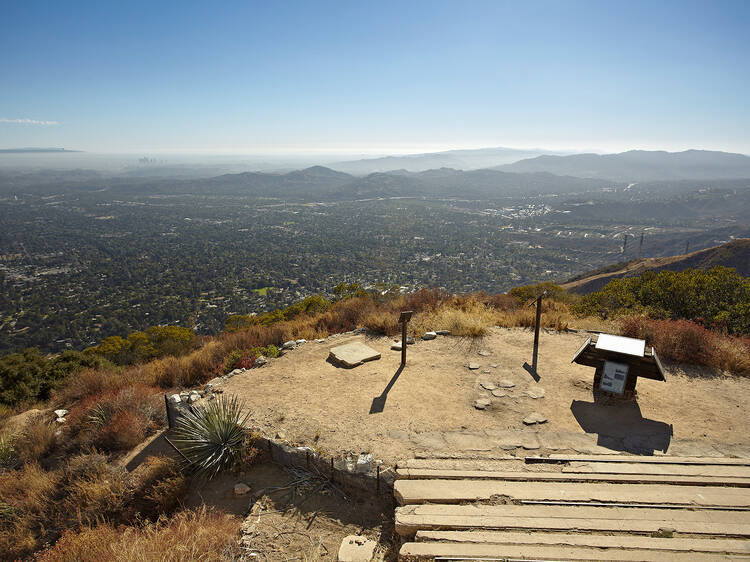 The ruins of a resort atop Echo Mountain

From 1893 to 1936, a network of funicular railways whisked Angelenos from a base station in Altadena to a handful of resorts and taverns, including a pair of them atop Echo Mountain. These days, you’ll only find ruins of the White City and the impressive Mount Lowe Railway: a rusted rail car, some stone walls and walkie-talkie–like “echo phones.”

To get there, it’s a nearly six-mile round trip on the fairly steep Sam Merrill Trail, which originates at the end of Lake Avenue (where you’ll find the remains of the Cobb Estate, a foothill relic with some haunted history). 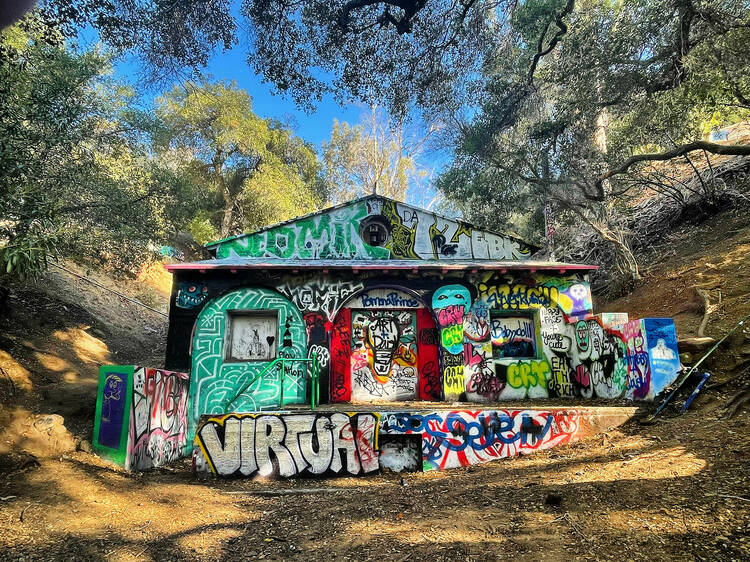 While the Rustic Canyon Trail delivers on its name, it also packs a more ghastly surprise: the ruins of a Nazi compound. Yes, just a couple of miles into the trail from Will Rogers State Historic Park, you’ll encounter the remains of this off-the-grid community that was built in the 1930s by a survivalist band of American fascists. It became a go-to graffiti spot decades after World War II, though much of the compound was demolished in 2016, with the notable exception of the still-standing concrete power station. 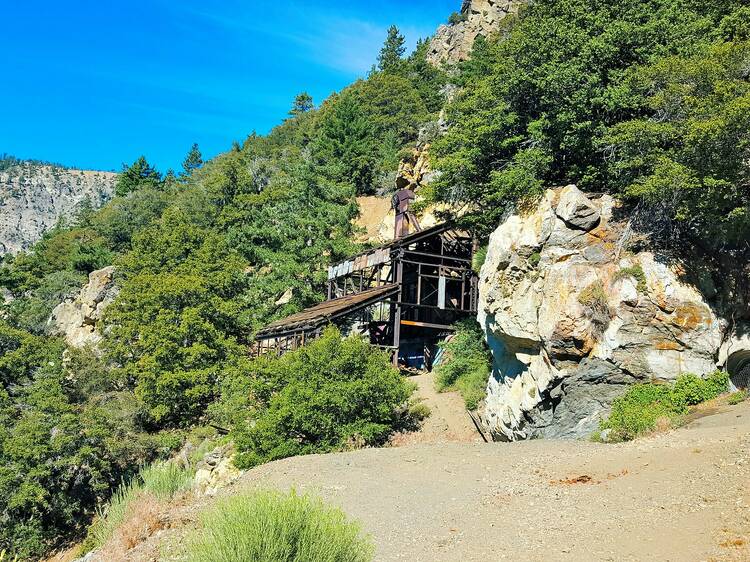 An abandoned shaft at Big Horn Mine

Barely two miles off Angeles Crest Highway, you can encounter a bona fide mine that looks more like a frontier relic than something you’d find in a SoCal resort area. Its origin story is shrouded in tall tales of murder and grizzly bear attacks but the reality is this operated as a mildly succesful gold mine in the very beginning of the 1900s. Despite a few revival attempts, it’s been mostly abandoned ever since.

It’s a relatively flat though narrow and gravelly hike over to the remains of the mine; in winter, however, expect some fairly deep snow standing in your way. You’ll need an Adventure Pass ($5) to park in the lot off Angeles Crest Highway (at the Vincent Gulch Divide). 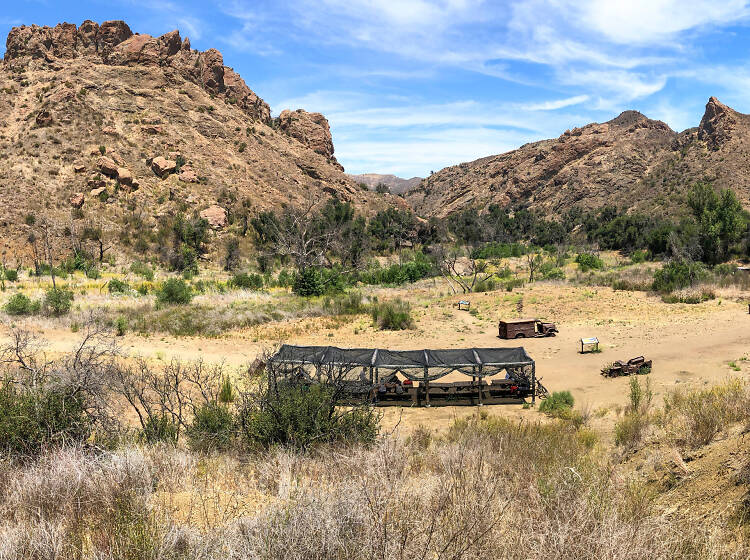 With dramatic gorges, open pastures, lush forests, hidden pools and jagged peaks, Malibu Creek is simply one of the most stunning spots in Southern California. But the Santa Monica Mountains space is also filled with a bit of silver screen history: From the parking lot ($12) near the entrance, keep following Crags Road and you’ll eventually spot the remnants of the M*A*S*H set.

The 1970s military series used what was then the 20th Century Fox Studios ranch for its exterior shots, and on the easygoing but sunny five-mile round-trip hike, you’ll see a pair of rusted vehicles and a restored ambulance from the show, plus a picnic area fittingly shaded by a cargo net. Consider a detour early on in the route to splash in the rock pool featured in Planet of the Apes. 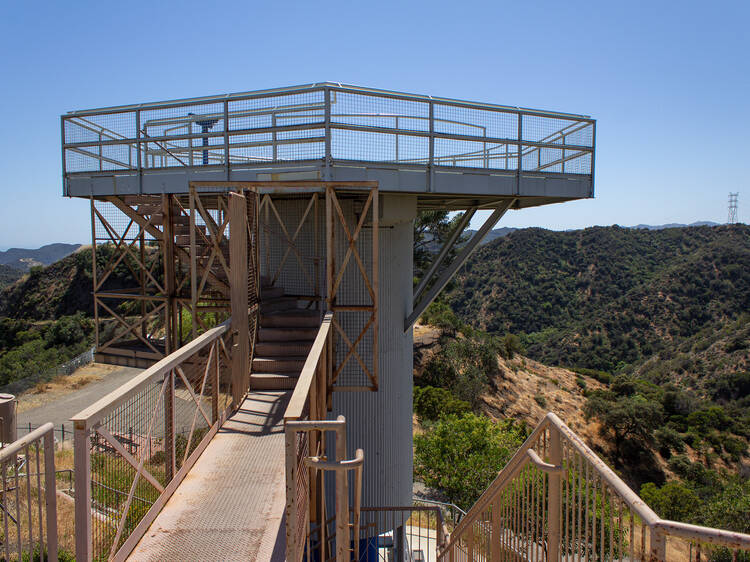 “Whatever tomorrow brings… Nike will be watching, always ready.” Such an ominous sign for such a scenic spot. But during the Cold War, San Vicente Mountain supported the 16 Nike missile launch sites in L.A., ready to protect the city from air attacks at a moment’s notice. It’s easy to see why this was such a prime surveillance spot for the defense network: The now-decommissioned radar tower provides one of the best 360-degree views in the entire county (on a clear day, at least).

To get there, keep following Mulholland Drive west of the 405. Just past Encino Hills Drive the road becomes barely paved, and that’s where you’ll find a parking area (if you’re lucky, you may find the gate open with vehicle access straight to the top). From there, it’s a gravelly two-mile walk to the tower and back. 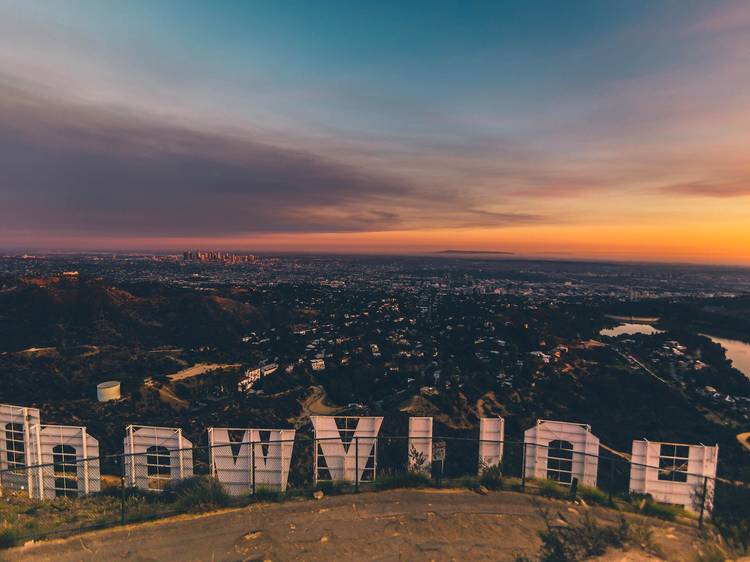 You can see it from all over the basin and your out-of-town visitors have begged you for a postcard-worthy view: The Hollywood Sign isn’t exactly hidden. But the fact that you can stand not too far behind those recognizable letters remains one of L.A.’s most easily overlooked (and, let’s face it, bizarre) bucket list hikes.

A handful of routes will take you there, though unfortunately the most straightforward one was shuttered in 2017. Instead, we’d recommend the four-and-a-half-mile round-trip trek along the dusty Innsdale Trail (with free parking where Innsdale and Canyon Lake Drives meet), around the curves of Mulholland Highway and up the paved Mount Lee Drive. At the summit, step up to the chain-link fence and you’ll find yourself about a swimming pool’s length from the back side of the 45-foot-tall letters.