The Art of Banksy

The largest collection of Banksy artworks ever to hit our shores has not been without controversy – but would you expect anything less?

A Banksy retrospective, featuring more than 80 of his best-known works, and exhibited in a gallery space. Does it sound like something that the British artist – an anti-establishment icon – would ever approve?

No, it doesn’t – and it’s not. The Art of Banksy is an entirely unauthorised exhibition, curated by the famously anonymous artist’s former agent, Steve Lazarides. The pair, who are both from Bristol, go back many years to the days when Lazarides took photos of Banksy’s work for the now-defunct Sleazenation magazine. These days, he owns Lazarides Rathbone gallery in London, and is recognised as a key figure in bringing street art into galleries. Several years ago, he realised that many of his clients owned Banksy works, some of which had never been seen by the public. Soon, the idea of doing a retrospective took hold.

Lazarides didn’t feel the need to seek Banksy’s approval – not that he would’ve received it anyway. For reasons he’d rather not talk about, the pair haven’t spoken for eight years. “He probably fucking hates it,” he says, laughing. “But I think [Banksy] genuinely belongs to the general public. He made himself public property…  and I haven’t taken anything off the street – I’ve just put a collection of works together for people to enjoy the art of Banksy.”

Not everyone agrees with this sentiment. Two days before the exhibition opened, Melbourne street artist Matt ‘Adnate’ painted a version of Caravaggio’s 'The Taking of Christ' directly onto the entrance of the exhibition at Fed Square, with Lazarides as Judas. Others are irked by the uneasy marriage of Banksy’s anti-capitalist works and the merch on display as visitors exit (through the gift shop).

But these questions aside, this is your chance to get up close to some of Banksy’s most incendiary pieces. On entering, visitors are met with ‘Girl with Balloon’ – a work that appeared on London’s South Bank in 2002, and then took on a life of it’s own, becoming a symbol of the #WithSyria campaign in 2014 (and later, a tattoo on Justin Bieber’s forearm). Then it’s onwards into a space designed to mimic the streets of London. Thought-provoking pieces like the ‘Flower Thrower’ (2003) and ‘Bomb Love’ (2003) are instantly recognisable. There’s the tongue-in-cheek ‘Flying Copper’ (2003) the deeply poignant ‘Burger King’ (2006), and the imposing ‘Flag Wall’ – the large-scale stencil piece that debuted at his 2006 ‘Barely Legal’ exhibition in Los Angeles and shot him to fame in the US.

“I’m hoping that each [visitor] gains something different,” says Lazarides. “You can put a million different people in front of the same painting and they’d come away with a million different attitudes. What I hope is that they feel free enough to think that their opinion means something. All I’ve done is put a bunch of paintings together in a room.”

Complementing the exhibition will be a showcase of some of the country’s best-known and most incendiary street artists, including Bailer, Heesco, Makatron and Ruskidd. There’ll also be a rotating selection of food trucks, courtesy of Welcome to Thornbury, a bar, and live DJs in a space called ‘The Railyard’ (below). 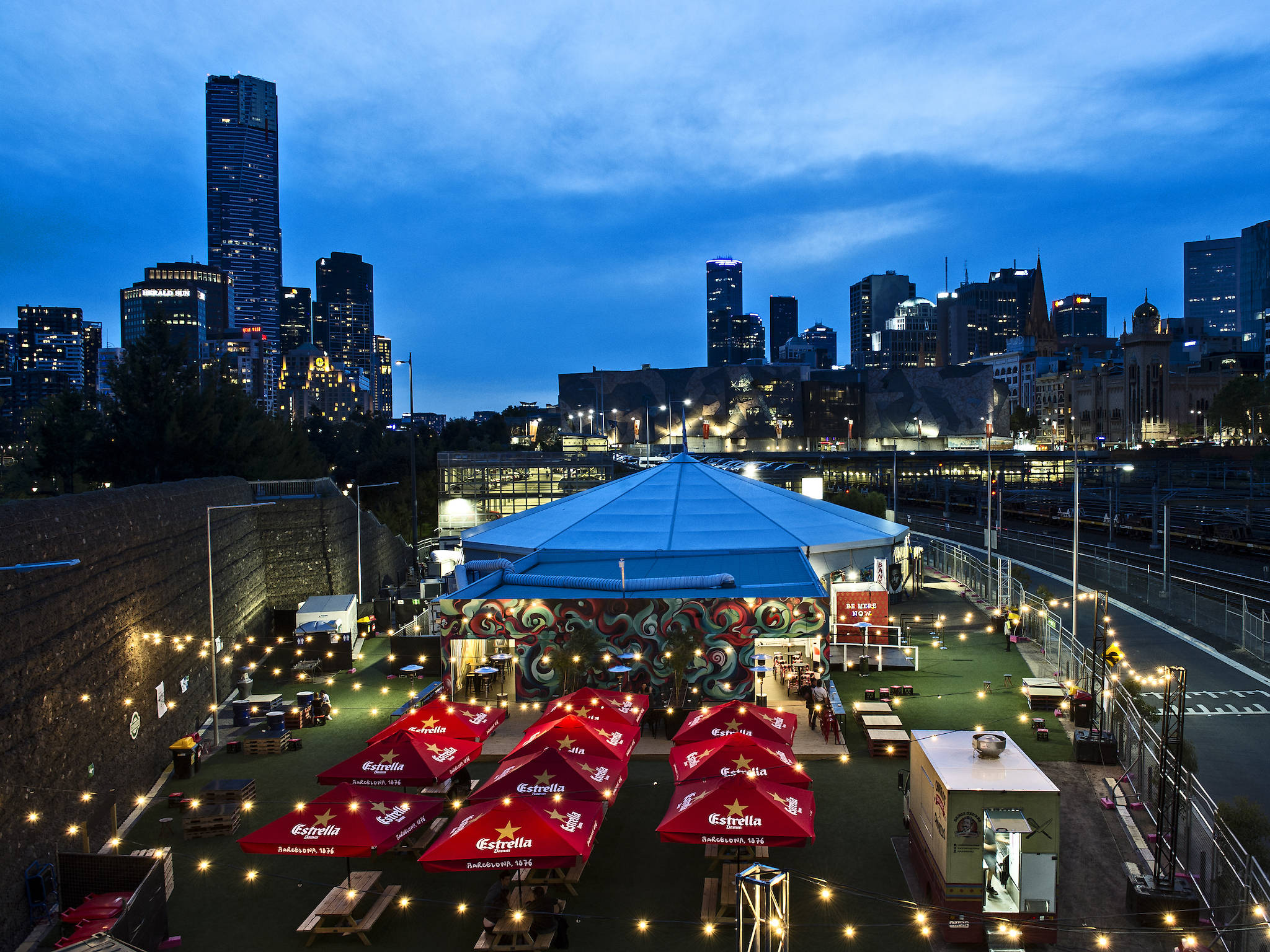 What's with the rats?

Back in 2010, Time Out Sydney scored an extremely rare interview with the artist to coincide with the release of his film Exit Through the Gift Shop, and featured an original Banksy work on their June cover (above).

When asked in the interview about his fascination with rats, the artist gave a characteristically self-effacing answer: “They exist without permission. They are hated, hunted and persecuted. They live in quiet desperation amongst the filth. And yet they are capable of bringing entire civilisations to their knees. If you are dirty, insignificant and unloved, then rats are the ultimate role model. I'd been painting rats for three years before someone said: ‘That's clever it's an anagram of art’. And I had to pretend I'd known that all along.”