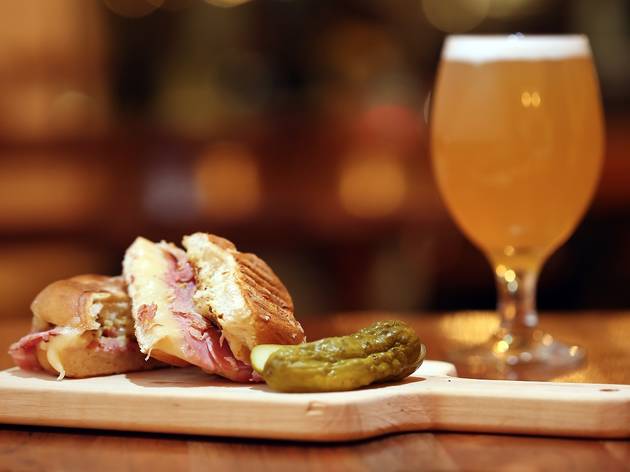 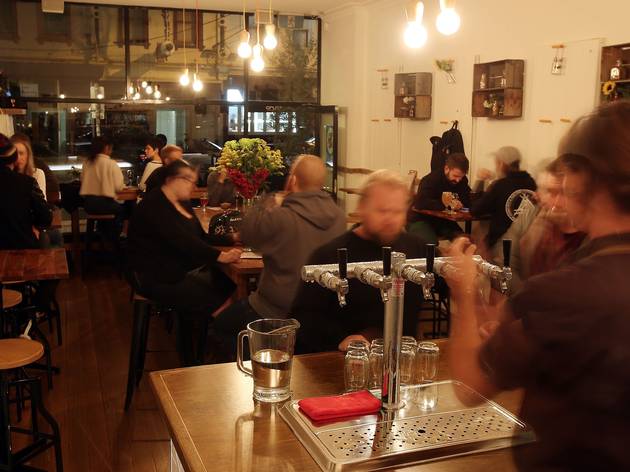 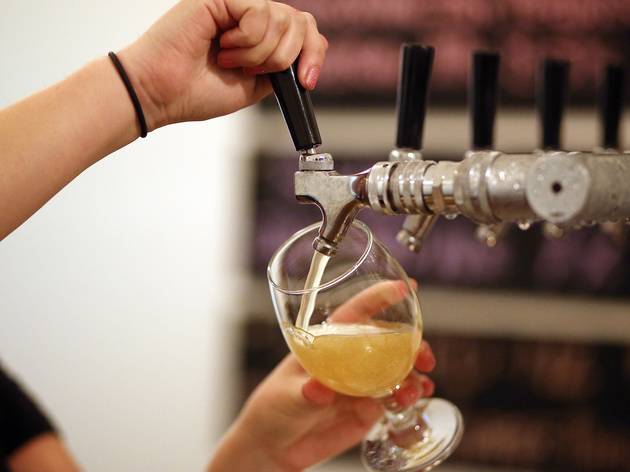 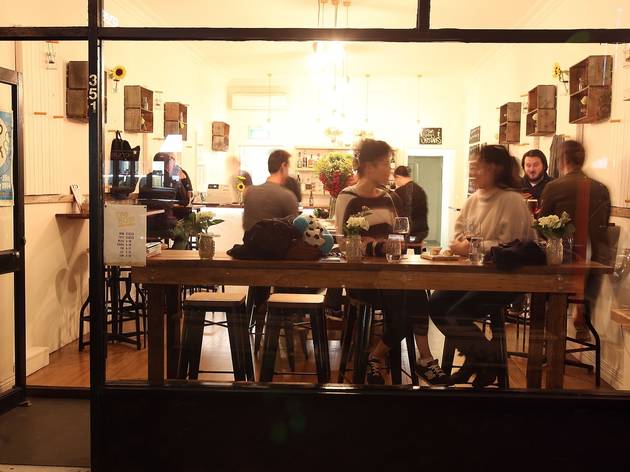 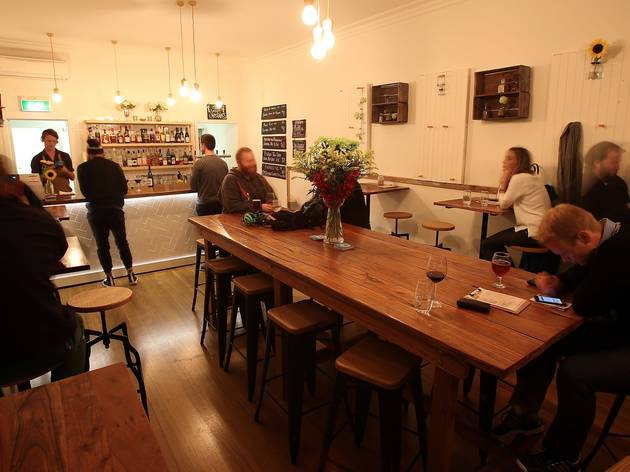 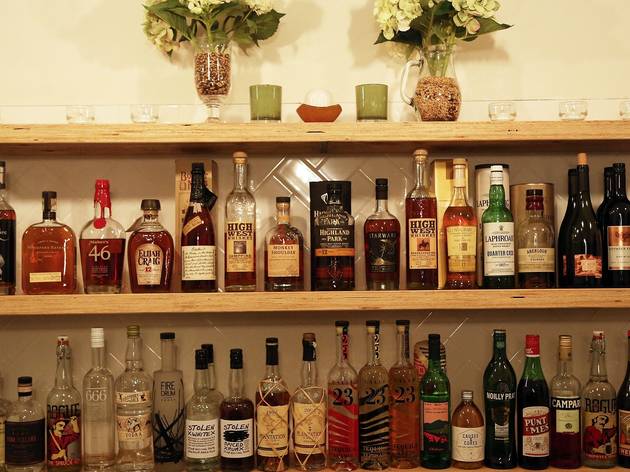 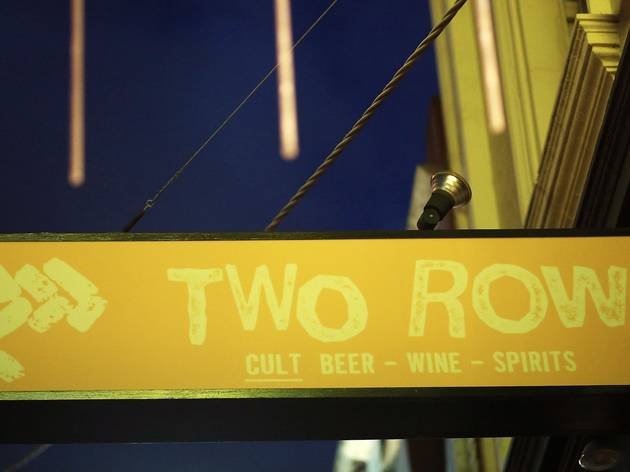 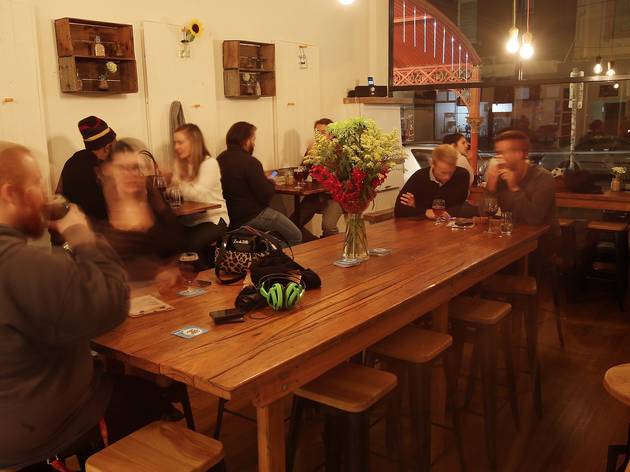 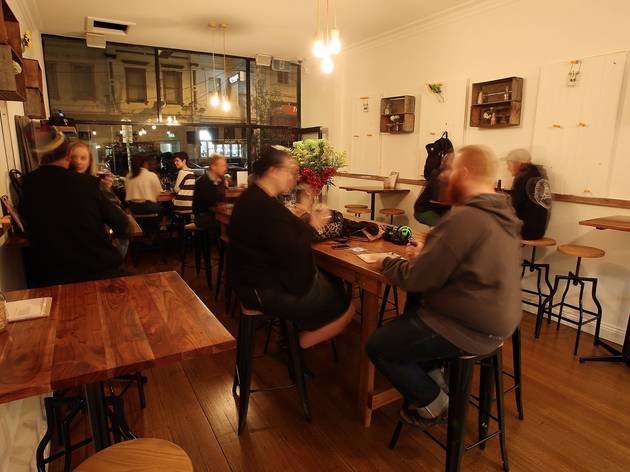 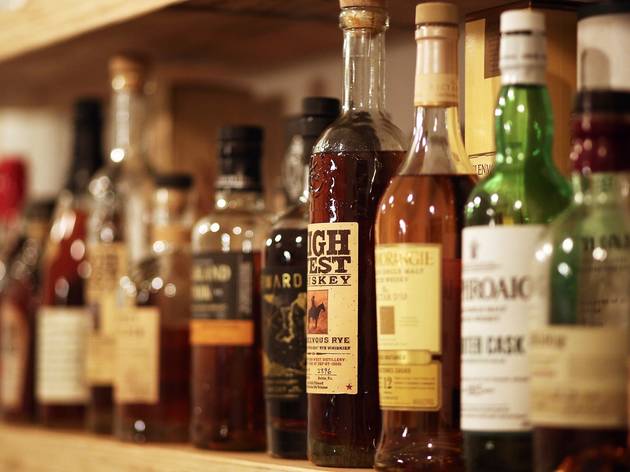 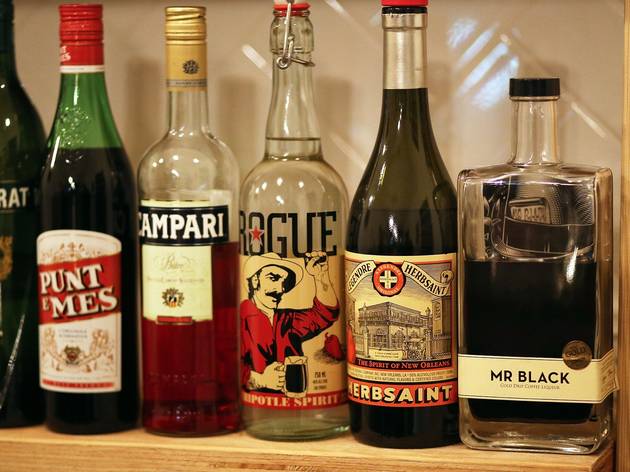 Cult beer is the angle at Smith Street’s new bar from Tiffany Waldron and the good folks behind Slow Beer – Melbourne's best beer shop. But forget those five faucets dispensing the weirdest and wildest brews this town has ever seen. There's the bar menu to consider, consisting almost entirely of grilled cheese. Dairycious.

There's a Reuben, or a blue cheese number on fig and fennel bread, but we’re all about the Dan – so named because its pretzel bun shell is custom-made for the bar by beer fan Dan Taranto of Five and Dime Bagels. That extra crunchy, chewy and slightly sweet bun is filled with the foot-ripe funk of gruyere, salty ham and beer-infused mustard with a fruit-hop kick. It's a croque MaDan! Also one clear signifier that Two Row’s commanders-in-chief know what makes for good beer drinking.

The offering at this slick two-floor job is as strong and luxurious as an Alaskan Whaler beard. The bottle list runs two pages deep, starting with your familiar Mountain Goats, Two Birds and Cavalier brews and progressing to freaky-pricey town. Exchange $33 for Evil Twin’s Even More Jesus – it’s the charred chocolate holy grail of imperial stouts.

The tap beers are scrawled up on the wall and have the lifespan of a fruit fly. On our visit, Brew Cult’s Captain Obvious IPA has come direct from tank to bar that day and is so hop-fresh and weedy it’s like walking through a drum circle at Confest. “I smashed my rear window driving it over,” says brewer Steve Henderson, drinking a consolation pint.

You’ll find a lot of brew folk here. The whole downstairs bar feels like a clubhouse. Shaggy beards run rife and punters are sniffing and swilling like it’s their job. If you prefer your pints without the DVD extra-style commentary and a little less glare – it’s pretty bright in the white-and-blonde-wood bar, possibly to accommodate note taking – there’s an upper floor, filled with Chesterfields, East Coast hip hop and the sweet smell of toasted cheese.

There’s also high ABV fun to be had. Every bourbon, rum and tequila is top shelf gear, with one simple cocktail matched to each. It’s worth trying Rogue’s spruce gin (distilled from beer!) and tonic just for the sheer hell of it. Here lie adventures. Get on board.