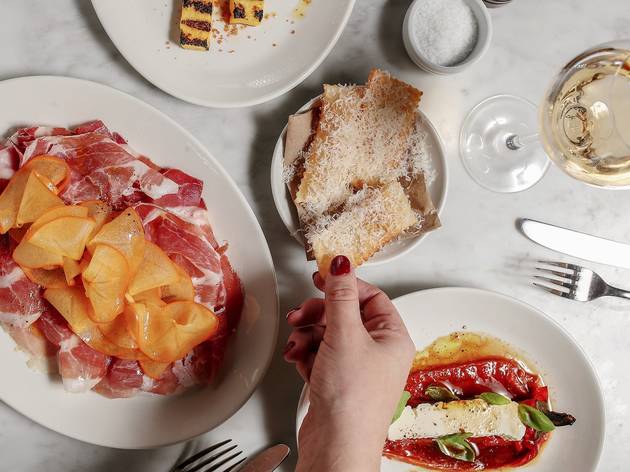 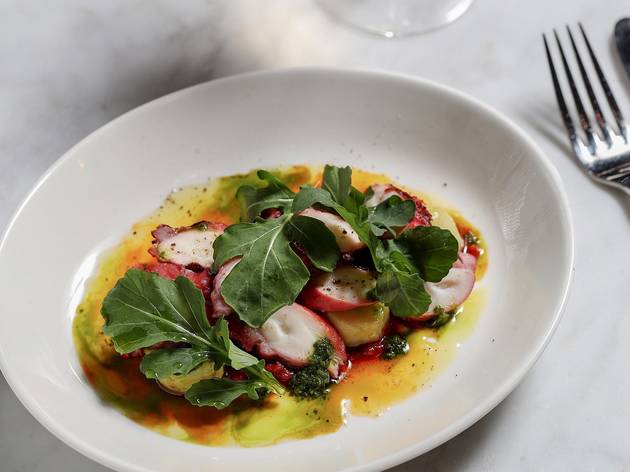 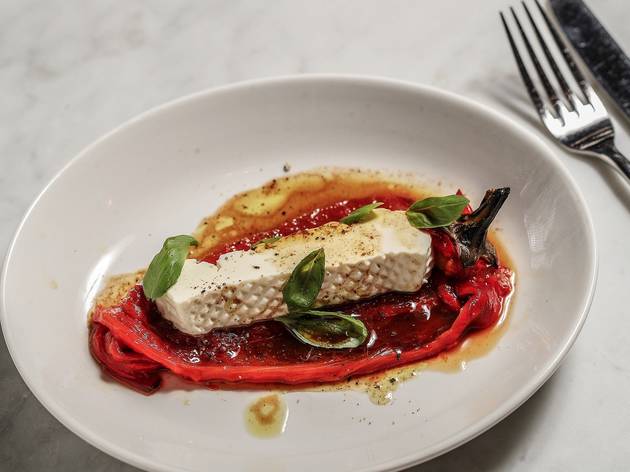 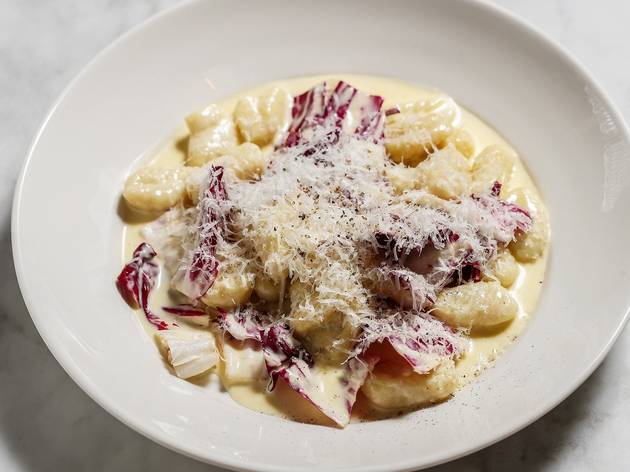 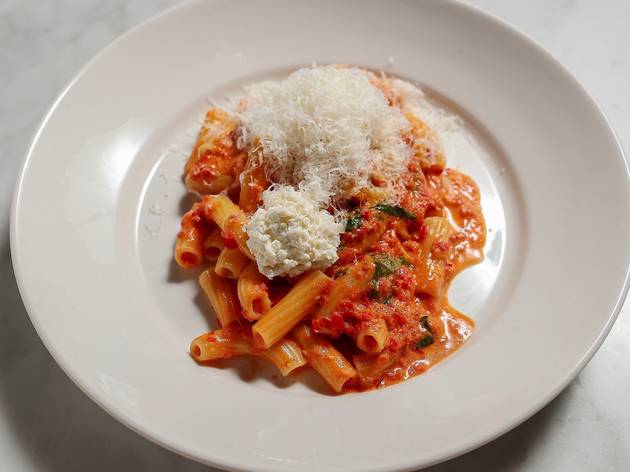 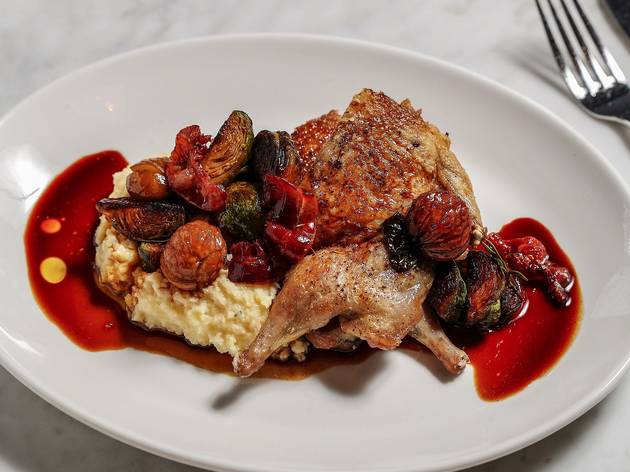 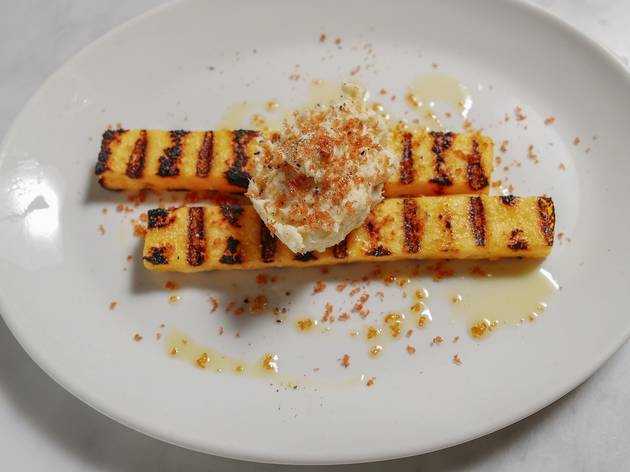 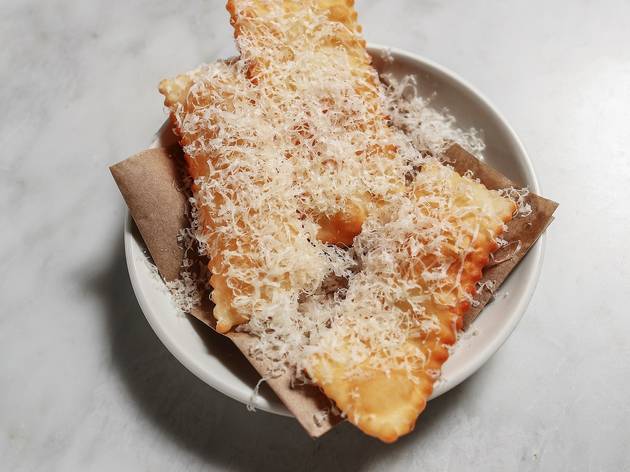 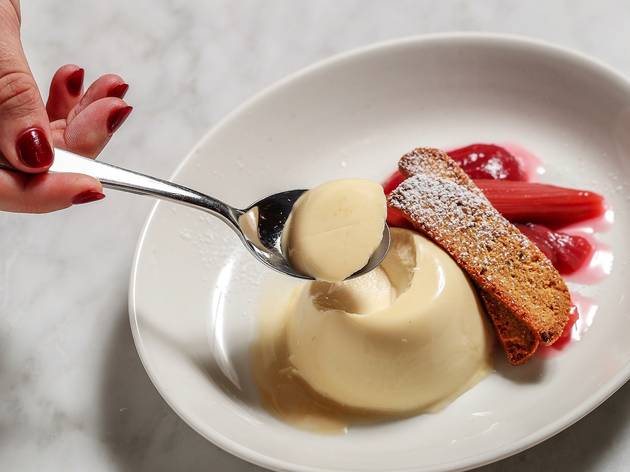 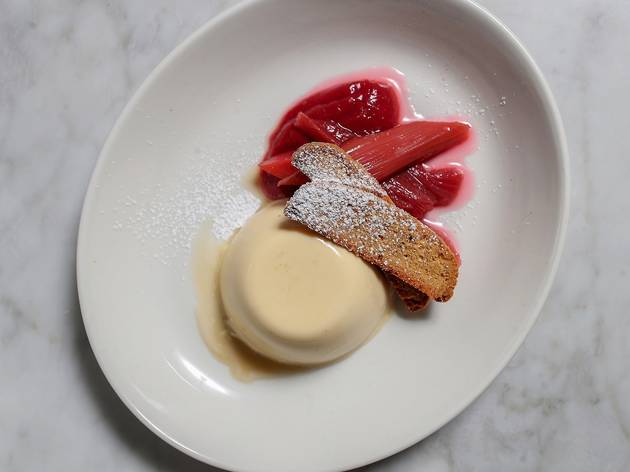 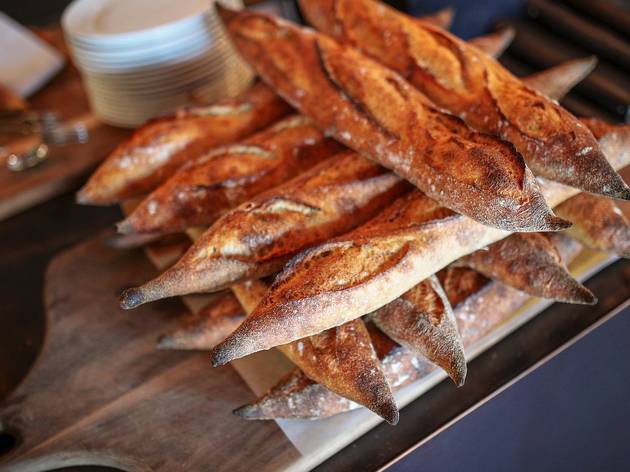 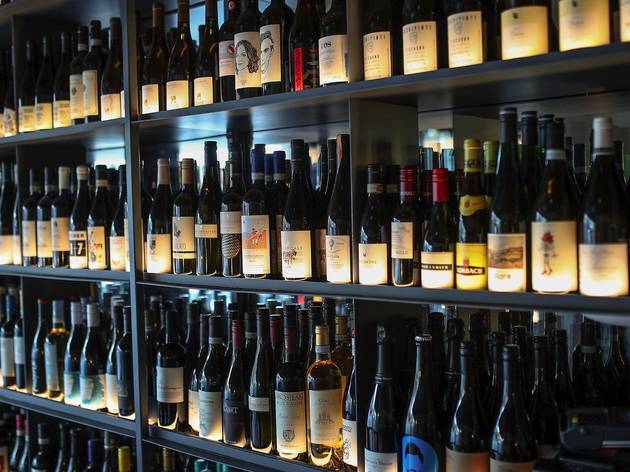 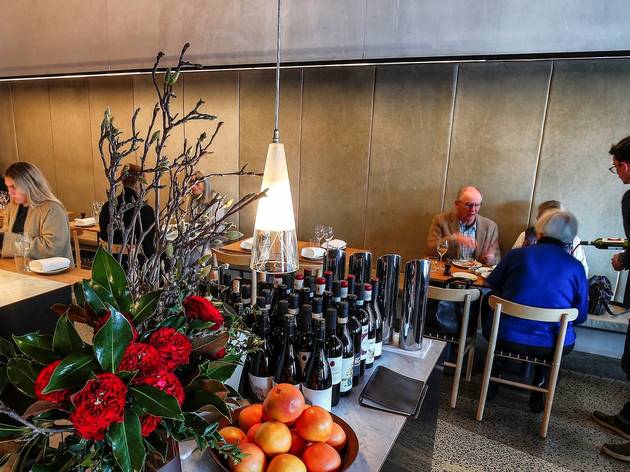 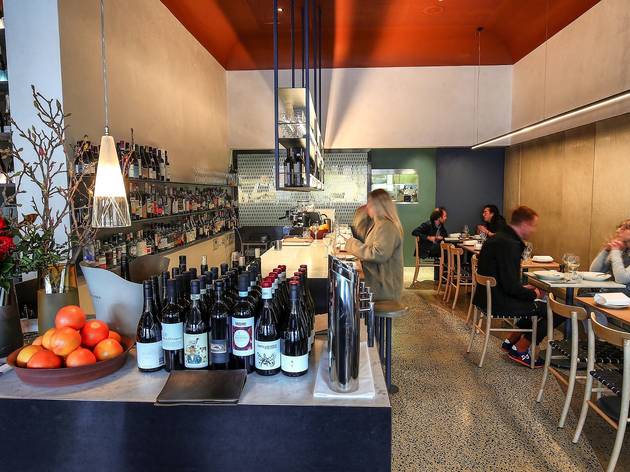 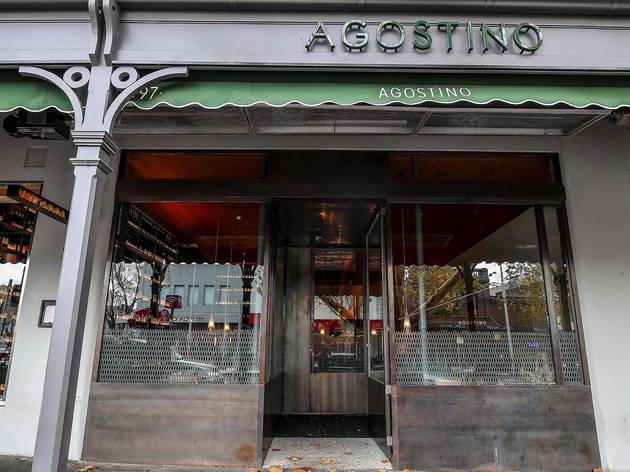 Have you ever tried to style your hair into a ‘messy bob’, or attempted to cook paella at home? As it turns out, looking effortless requires a lot of work. With Agostino, about four years’ worth has resulted in a restaurant that’s breezily confident from the outset, ready to elbow its way into Melbourne’s Italian canon. The place has barely opened, but the linen-clad staff are already gliding around buzzing rooms, pouring wines from a towering backlit cellar and swooping down plate after plate of sophisticated regional fare.

Agostino is the final, crowning jewel in the Valmorbida family’s epic complex of Italian drinking and dining, which also includes the revived King & Godfree Deli and rooftop spritz bar Johnny’s Green Room. But where the other two are more casual affairs, this upscale wine bar is here to make an impression. The space is a study in relaxed, discerning luxury, pale woods and dusty greens soothing as shiny terrazzo and marble bars adding a moneyed weight. Meanwhile, that glowing cellar holds a small town’s economy in triple digit European wines, sure to be given high rotation by the long lunchers and Carlton’s comfortable retirees. Smaller budgets are kept intact by the glass, with interest-piquing options like a buttery moschofilero from Greece and a deliciously unfussy red on tap – a tannin-light field blend of Italian varietals including lagrein and nero d’Avola that’s fat with dark fruits and yours for only $10.

The menu, meanwhile, is a clear-eyed exploration of simple, seasonal northern Italian. Pasta’s the ticket here, and boy do these folks know their way around a sauce. Compact parcels of gnocchi roll around a sticky yet silky gorgonzola sauce, its gentle funk punctuated by flutters of bitter radicchio, while bitey maccheroni scoops up pillowy vodka sauce, tickled with chilli and topped with a dollop of soft ricotta that, with a swirl, turns the whole thing creamy.

They outshine perfectly good mains. While roasted quail is pink and flavoursome, and its accompanying sprouts and chestnuts well treated, the sweet marsala jus pooling around both turns the dish a little one note. And why outlay $45 on a seafood broth when you can stack up on dreamy snacks instead? An update (and upgrade) on prosciutto and melon has wafer-thin slices of young persimmon draped over ripples of funkier, earthier culatello, while bullhorn peppers slow roasted in basil oil to shocking sweetness are served cold over a canvas of creamy, mild squacquerone cheese. Baccala mantecato – a traditional Venetian dish of cod whipped with olive oil – might require common heritage to appreciate its fibrous, fishy appeal, but curls of grilled octopus swiped alternately through bracingly tart salsa verde and salty, oily ’nduja are universal pleasers.

Dining at Agostino may be a Mediterranean dream, but two things nearly bring us back to earth. A slender room begets small tables, with little space for share plates, particularly when dining as a two. Staff offer to bring out antipasti one-by-one as ‘courses’, but beware this approach if you’ve got a place to be – on a busy Friday night, it takes 90 minutes and several plates of antipasti before Time Out’s maccheroni hits the table. And service, while generally friendly, can vary from green and keen to classically aloof (don’t even think about asking for coffee with soy).

The wisdom, then, is to make your lunches here long, and your dinners endless. Meander through the regions of Northern Italy and burrow deep into that wine list, letting the hours tick by before finishing on a perfect wobble of almond panna cotta. Reclaimed from the clutches of frivolous brunches, served simply in a god-fearing shade of beige with stalks of jammy rhubarb and sugar-dusted biscotti, it’s the effortlessly modern yet faithful Italian that this stretch of Lygon Street’s been waiting for.