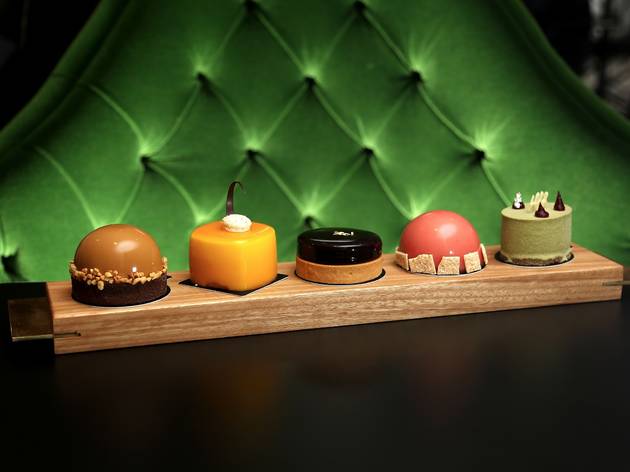 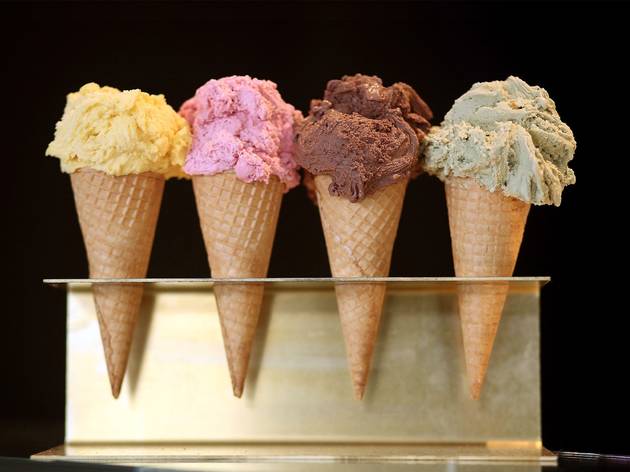 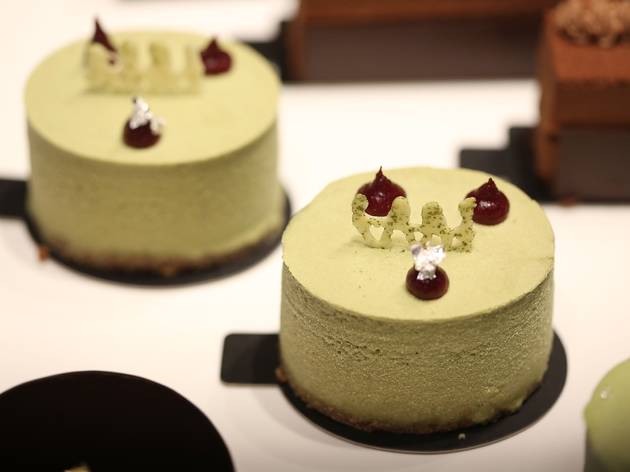 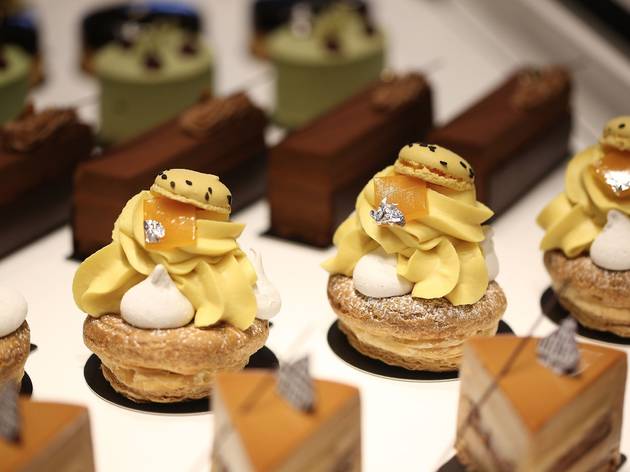 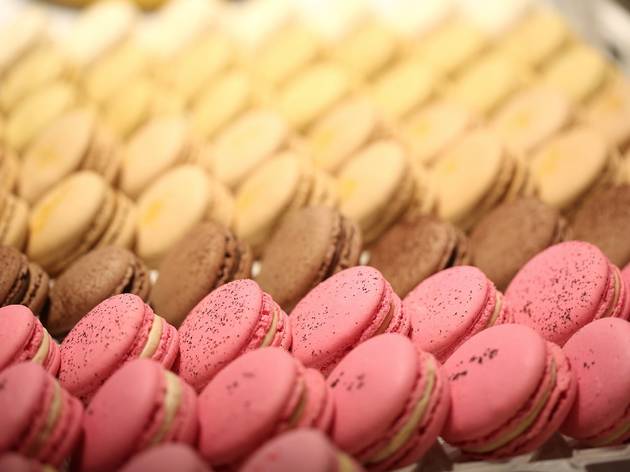 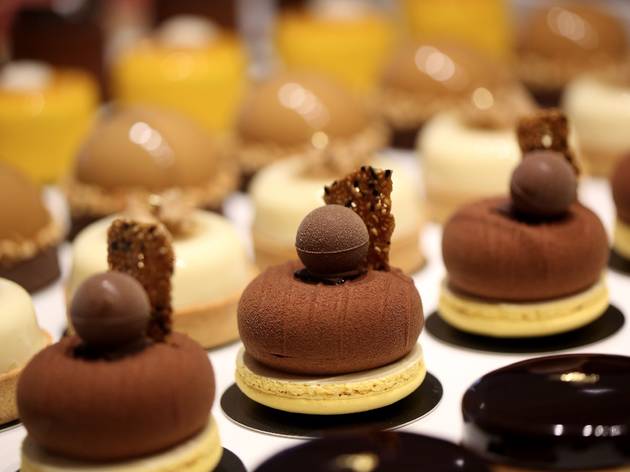 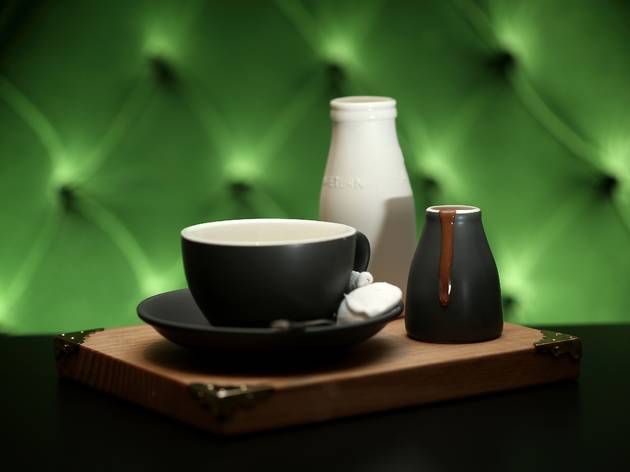 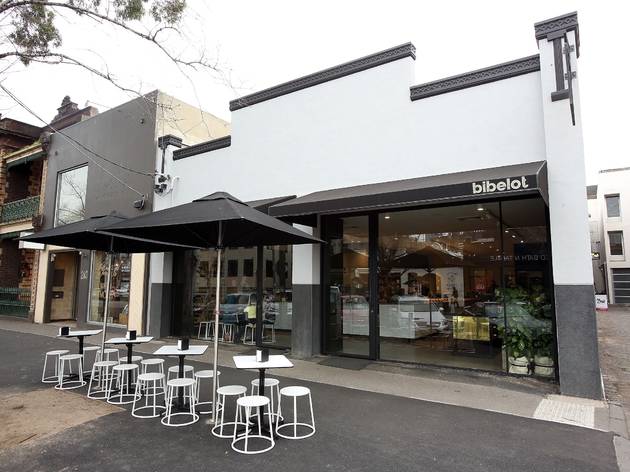 Bibelot dishes up cakes and confectionary so couture, you’ll want to walk out wearing them

This high-tea salon from the Chez Dre crew (housed in what was formerly Chez Dre's overspill space) is so sleek, so modern and glittery, it’s like a spaceship with cake. We wouldn’t have batted an eyelid if it took off for planet Pastry while we were inside it.

Bibelot is an ambitious proposition: espresso bar, gelateria, pâtisserie, café, chocolate shop and 'library'. You can spy on the chocolatier tempering away in the chocolate room, sit on the stylish-but-stark seats at the front and spy on Coventry Street, or occupy the emerald-green sofa in the café space at the back. If you’re seeking inspiration, peruse the sugary tomes – Leiths Baking Bible, Larousse on Pastry, La Maison du Chocolat and so on.

There’s a glass-and-gold chest of drawers in the centre, stocked with Bibelot’s bags of grown-up lollies at grown-up prices: cocoa pop and orange-infused white chocolate; caramelised puff corn with milk chocolate and pink salt; chocolate nougat and so on. One wall is lined with more fancy tooth-rotters: jars of honey in which whole macadamias lurk mysteriously; yellow raisins coated with freeze-dried raspberries and white chocolate; glossy passionfruit caramels…

This impressive pedigree explains Bibelot’s European leanings: airy eclairs, citron tarts, whisper-thin sablé biscuits and tuiles. Macarons – displayed in a seven-metre glass-and-marble counter – come in a rainbow paint palette of shades and a dizzying array of fringe flavours: a dusky purple, salty-sweet olive and white chocolate number, for example, which has a smoodge of dark, treacle-salty olive paste at its centre, or the sherbet-y lemon myrtle and popping candy.

The passionfruit and mango St Honoré is a gravity-defying pillowy cloud of mango Chantilly atop a puff of golden pastry, studded with fat vanilla marshmallows and a gold leaf-cornered passionfruit pastille. The pastry houses a jammy surprise: zingy passionfruit crème, which sings nicely against the Chantilly's creamy richness.

Take some chocolate bonbons home with you: a buttery toasted coconut cream, a fiercely minty peppermint fondant and a delicate rose lychee truffle, perhaps. On winter mornings, we’ll be back for the spicy, creamy prana chai tea (ignore the accompanying tea strainer and you'll get a mouthful of peppercorns). On a hot day, we’ll return for Bibelot’s rich, jade-green pistachio ice-cream, studded with chewy nutty nuggets, or we’ll go for the tropical punch of the surprising strawberry and lemon myrtle gelato. In a few months, we’ll be back for the high tea – the café's debut savoury offering.

Yes, we’ll be back. But we can’t help thinking we prefer our cakes and cafés a little less shiny and a bit more cosy, with a cushion or two.