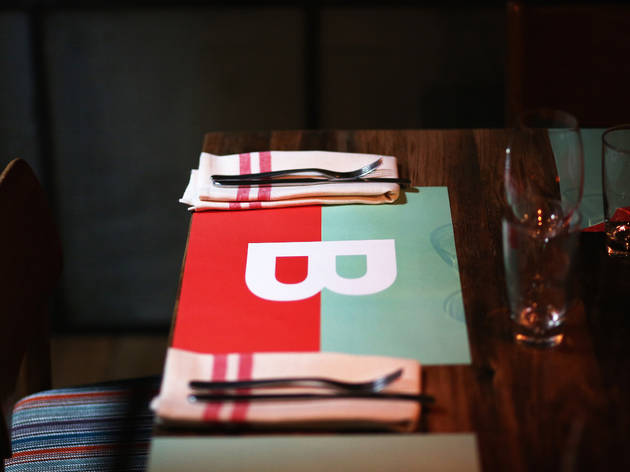 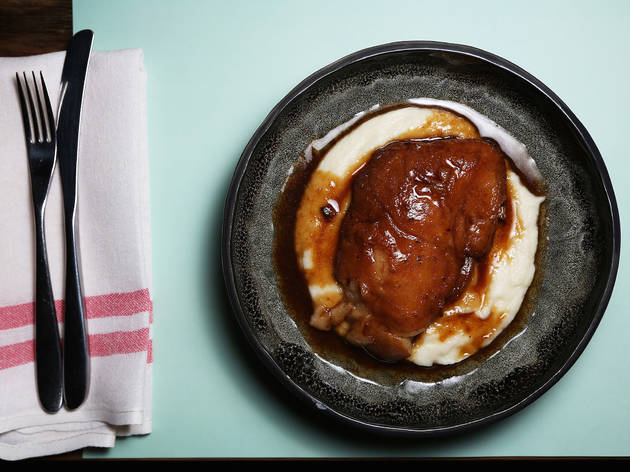 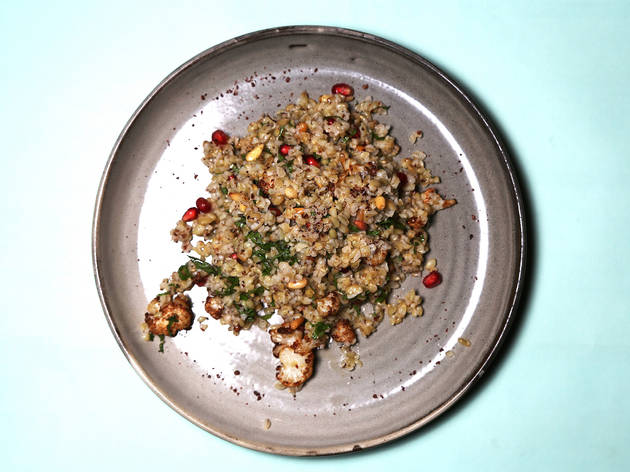 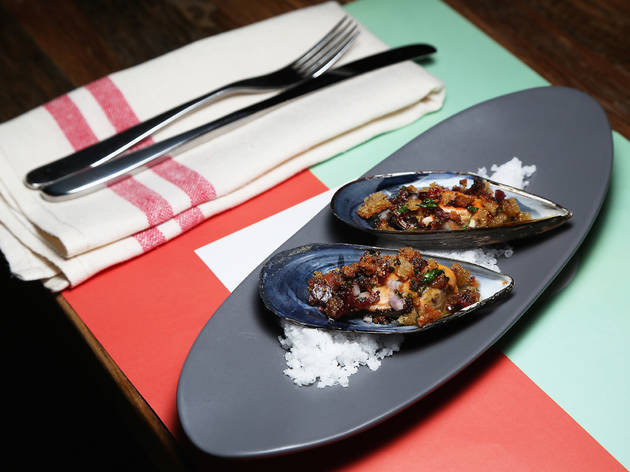 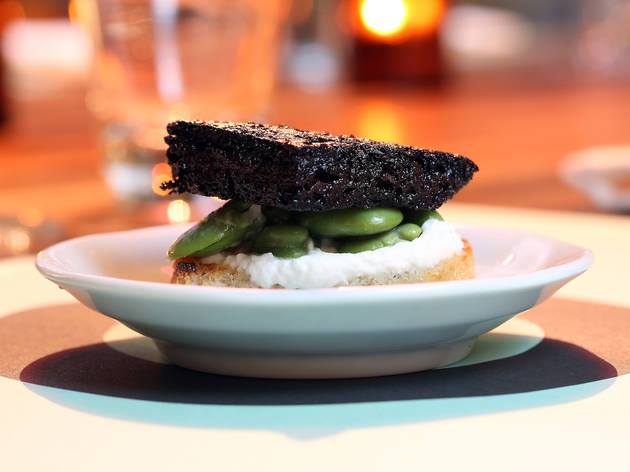 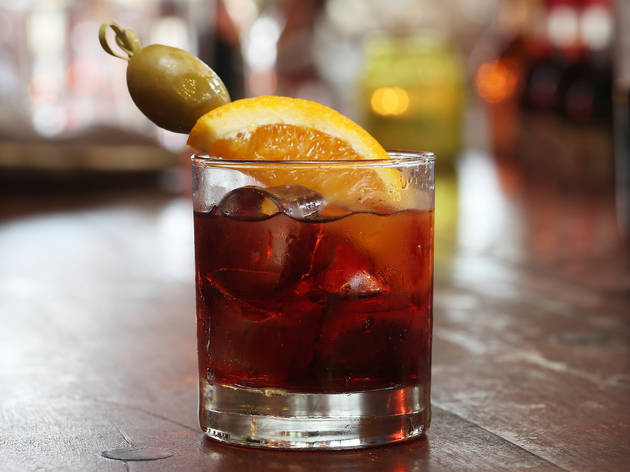 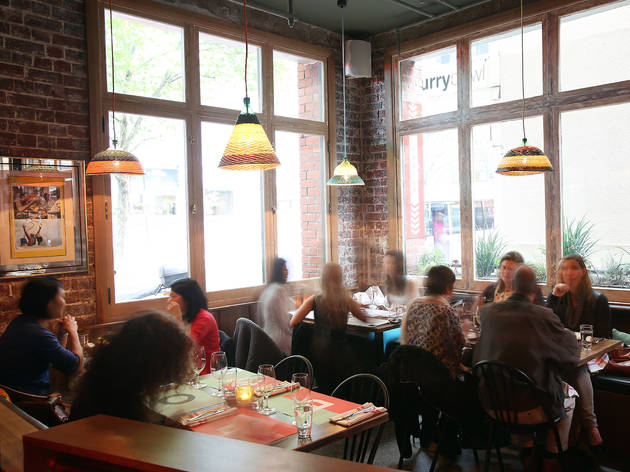 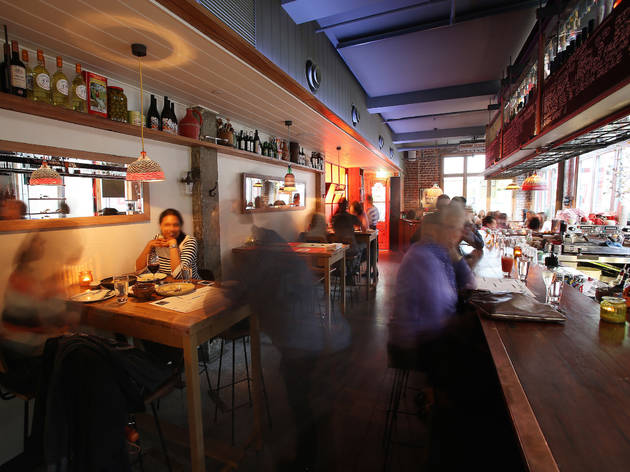 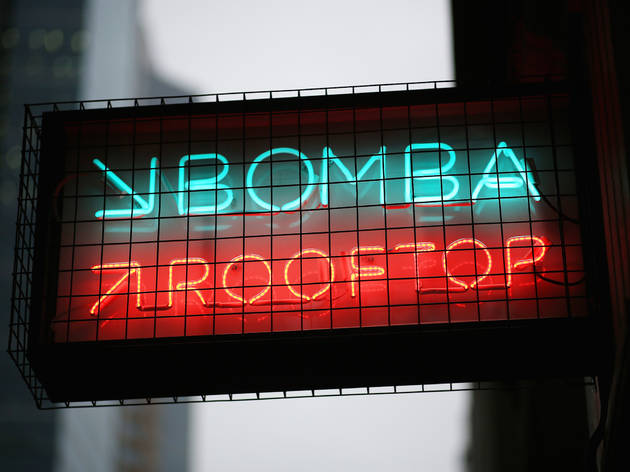 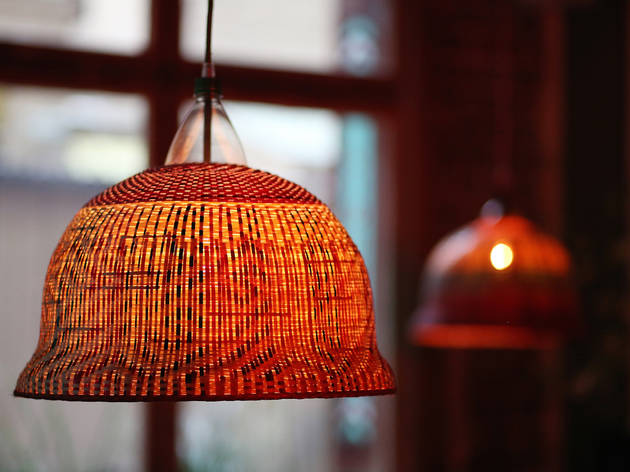 The Aylesbury has relaunched as a vermouth-loving Spanish tapas bar. Giddyup!

Rebranding – once seen as a desperate act of denial on the part of failing interest – is suddenly all the rage.

The Press Club has been belting along since it became casual Greek eatery Gazi in August, and now it looks like the punt may pay off for the team behind the Aylesbury: the produce-driven, pickle-loving restaurant on Lonsdale Street that has now become Spanish boozery, Bomba.

Gone is the duck mascot. Gone too are the intricate technique-driven plates of all things local, pickled and smoked. In their place you’ll find a red-hued room festooned with woven straw light shades, tapas built for get-in-get-out eating and enough vermouth to sink an armada.

This is Bomba. And the place is heaving. At 7pm on a Tuesday we squeeze into the last table. If you’re planning on coming any later, we recommend you book – you can do that – but if you do walk in and have to wait, the rooftop bar is a pretty good place to kick things off with a frosty Estrella. Or how about some vermouth? They’ve got the botanically funked up fortified wine coming out of their ears, and pretty soon out of a tap – courtesy of the local dudes at Maidenii, who are making them a special blend.

Head chef Andrew Fisk’s menu is built of little things that are easy to put together, and post aperitivo things happen pretty fast. Within seconds the table is covered in plates of translucent air-dried tuna curls (mojama) that taste like soft fishy jerky and fine, candy-striped ribbons of slow cooked pork belly that’s incredibly mellow despite having undergone a lemony pickling.

It’s a far more pan-Spanish menu than you’ll find at Añada – owners Jesse and Vanessa Gerner’s Andalusian tapas joint. From the South you have montadidos – bites on bread like a fat hunk of spicy morcilla riding atop goat’s cheese and broad beans, and soft chunks of tortilla with a big orange dollop of paprika mayo. Weighing in for Valencia in the East is a big bowl of arròz negre – a sort-of loose, crustless seafood paella packing juicy prawns that exudes squid ink all over the plate.

You couldn’t call Bomba a dumbed down version of its former self. You still have the sharp service skills of sommelier Shane Barrett, only now he’s pouring predominantly Spanish wines at a flat rate of either $40 or $60 a bottle.

Get him to pour you the red Viernes mencia. It’s as sweet and juicy as the sticky, sherry-braised pork jowl – king of Bomba’s meat dishes.

We could easily make a meal from the menu’s rear right corner of grilled asparagus spears balancing a squidgy slow poached egg and lemony breadcrumbs, and hefty salads of freekah and cauliflower buckshot by pomegranate jewels.

We liked the Aylesbury. We always did. But Bomba is no consolation prize. It’s a faster and smarter beast where the good times are destined to flow as freely as the vermouth. We’ll be back.