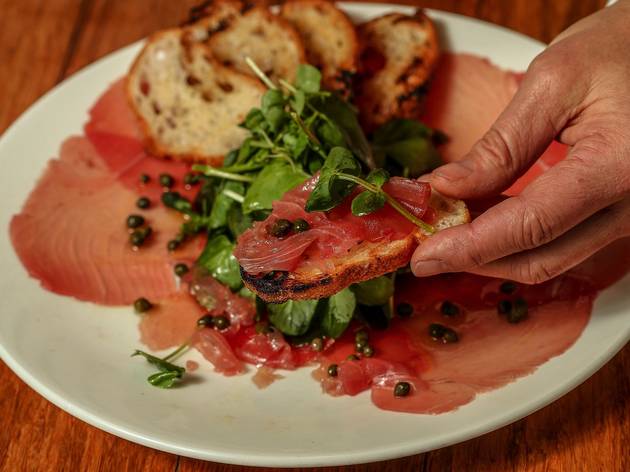 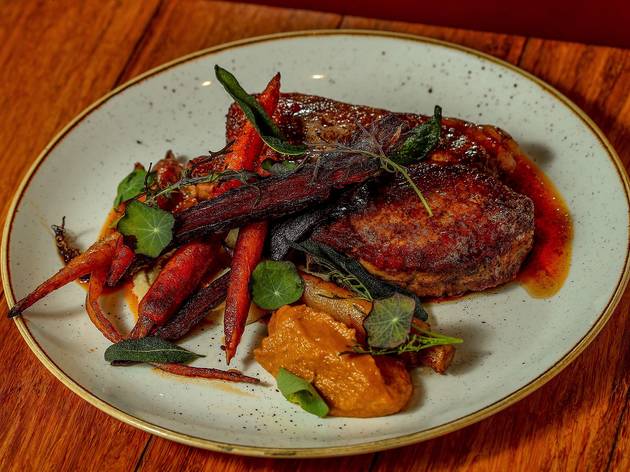 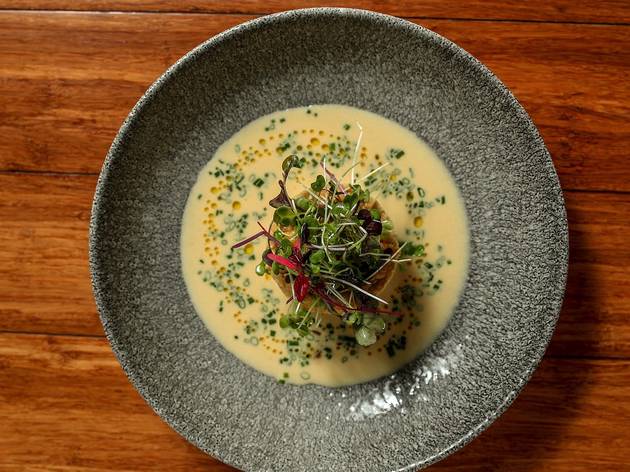 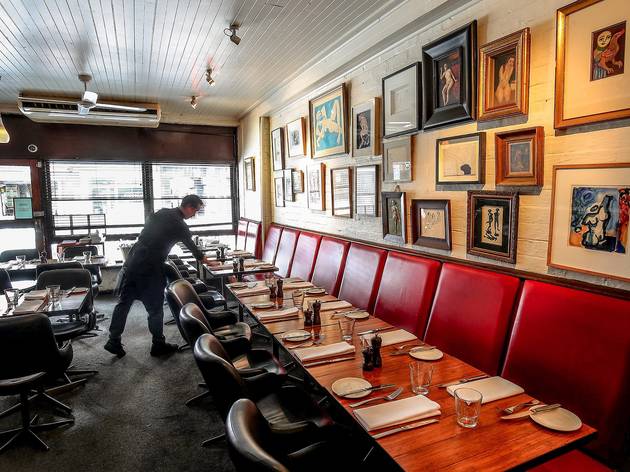 St Kilda has changed since Cicciolina opened in 1993. Maybe it’s the drizzle, but it feels weary. The section of Acland Street that Cicciolina sits on, a one-time boho hotspot, is now reduced to a cut-copy mall. We enter from the side after nearly pushing through the glass of a front door that, as it happens, does not open, and are greeted by our brilliantly warm and socially gifted waiter, who has been with the restaurant for 15 years – auguring well for the food.

St Kilda might be a vastly different place now to the raunchy haunt depicted in The Secret Life of Us, but Cicciolina has barely changed. Nondescript ‘90s café jazz rides over the hum of a half-full midweek crowd. It’s squishy but cosy, shabby but friendly, and we mush ourselves into our table, nailing that awkward bum-shuffle past our neighbouring diners as we take our seat under a wall of nudes – a nod to the restaurant’s muse. Crowd-wise it’s a real St Kilda sampler, though given the asking price of the mains (hovering around the $40 mark) it’s comfortably pricing out most under-30s, other than those accompanied by parents. It’s a fiercely loyal patronage, though, with our waiter commenting that she recognises half the diners in the room.

We begin with a couple of handles of Moretti and crack a menu that showcases classics from the halcyon days – the tuna carpaccio; the blue swimmer crab, shallot and lemon thyme soufflé – both of which we order. And a few new tricks are chalk-scrawled as specials on the blackboard, from which we opt for the baby snapper fillet. We also throw in a pork cutlet for good measure. The table bread is supplied by Wendy’s Bakehouse on Carlisle Street, a Vietnamese bakery down the road that has done so since Cicciolina’s began and reportedly crafts each loaf from the original mother dough – a nice touch.

A flick through the wine list reflects the functional if not show-stopping appointment of the bar, the back pages listing a good variety of Spanish, French and Italian varietals. We hit a local Rob Hall Chardonnay.

The tuna carpaccio is visually stunning, an offer of millimetre-thin slices of tuna enlivened by a lime-infused oil, dotted with capers, topped with watercress and served with garlicky charred bread. If the name didn’t already scream mid-‘90s, the crab soufflé is a gaudy throwback triumph, gloriously cheesy and bathed in an almost NSFW champagne and chive velouté that, in concert with the growing atmosphere and the wine – and the nudes – sets us to blushing. It’s a lot, and considering what is yet to follow, probably too much of a good thing, but we’re not complaining.

The baby snapper fillet lands heavy, topped with crispy soft-shell crab, girt by a strong prawn bisque and bolstered by Parisienne gnocchi and peas. It’s a textural playground: the crispy skin of the fish and crisp crunch of the soft shell crab offsetting the soft snapper flesh and gnocchi. And while the bisque slightly overpowers the delicate notes of the snapper, it’s otherwise a winner, and a load of food. As per the emergent theme, the pork cutlet is also enormous. It’s a perfectly cooked and tender cut accompanied by harissa-heavy vegetables and various purées that leave little to no room for dessert. We soldier on and opt for a crème caramel, whose accompanying mille feuille steals the show.

Nobody likes getting old, but like her namesake, Cicciolina is navigating her twilight years with poise and grace. The hats might be gone, the hype dulled, but Cicciolina knows it needn’t chase the whims and trends of modern dining to know its worth. Its customers don’t want that, and nor do we. The food – unapologetically heavy-handed by today’s tastes – is gorgeous, and it’s nothing if not great value for money. Above all, it’s the restaurant’s sense of assuredness that lets you know you’re in the right place, running right from the kitchen through to the floor staff, whose deft balance of friendly to professional ought to be studied. An institution, not a revolution. Also, they gave us a free loaf of bread!