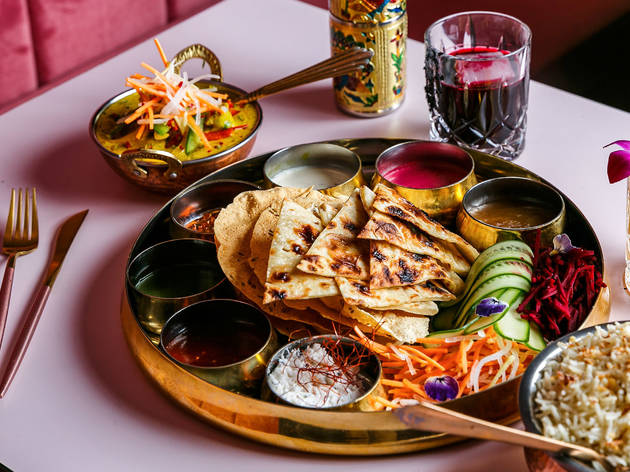 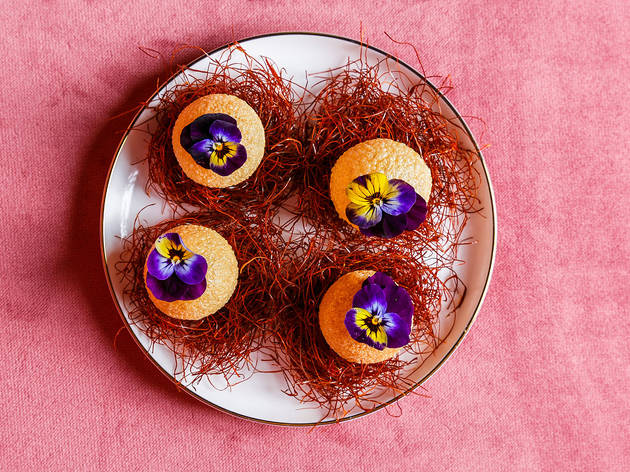 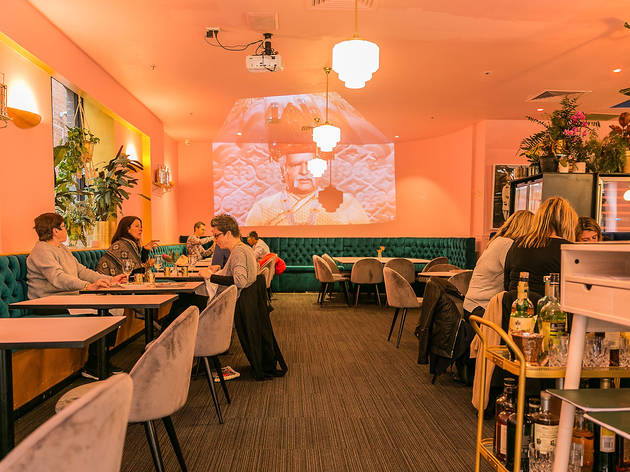 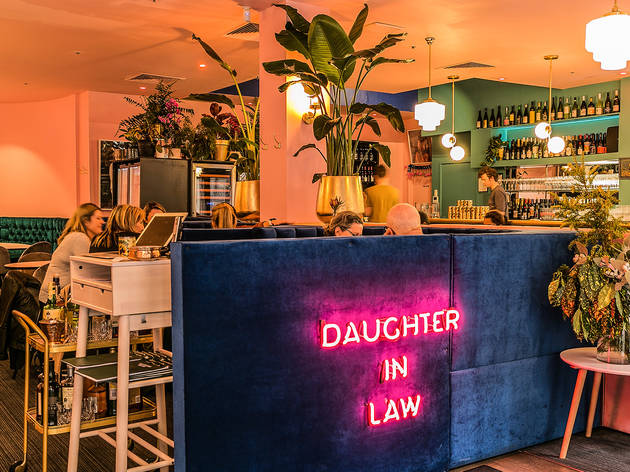 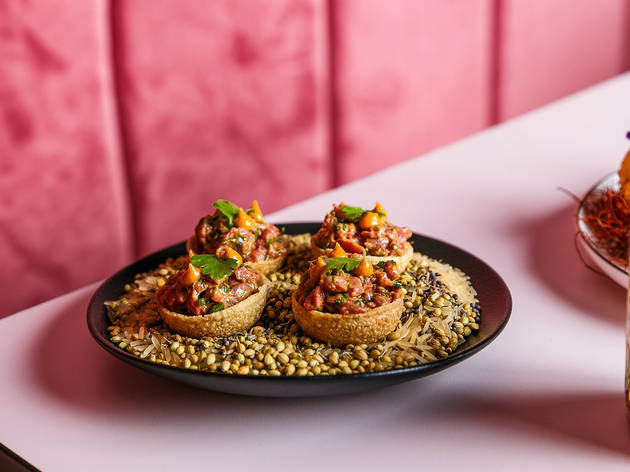 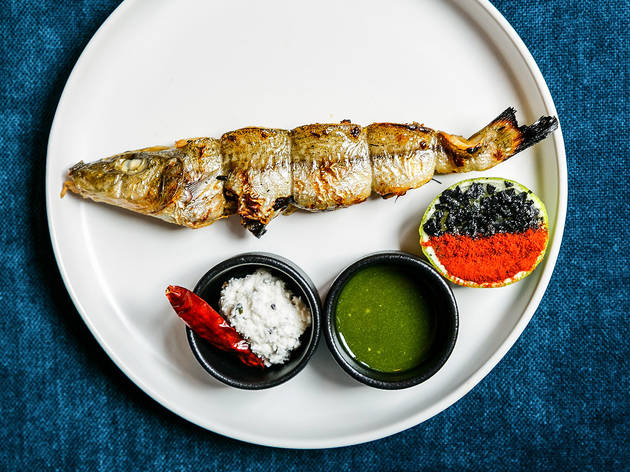 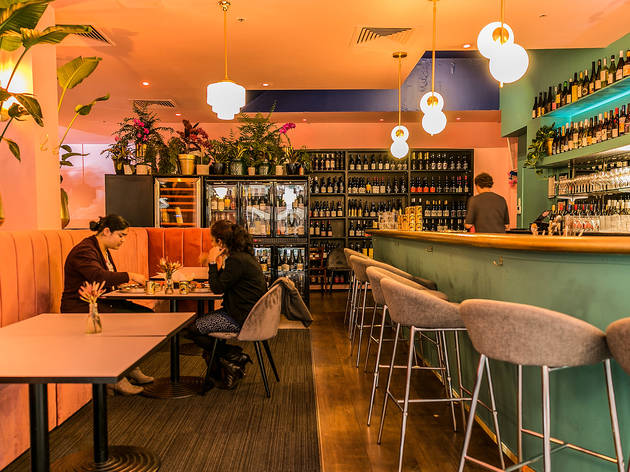 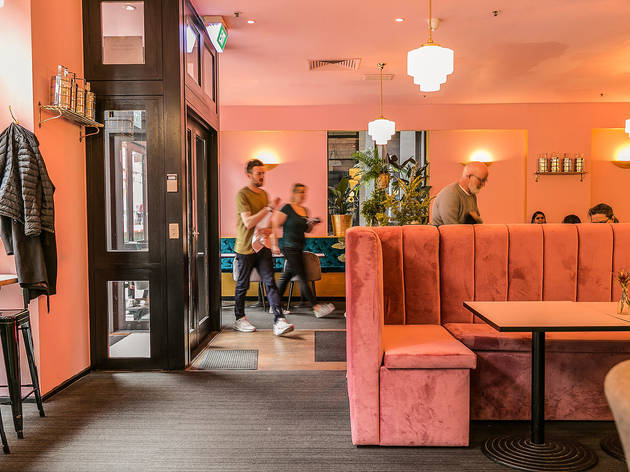 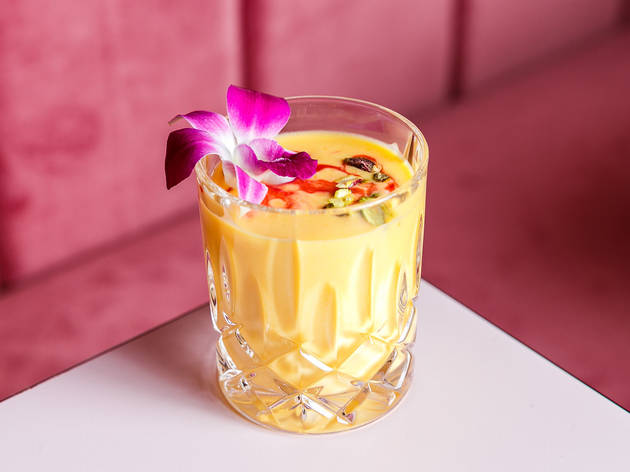 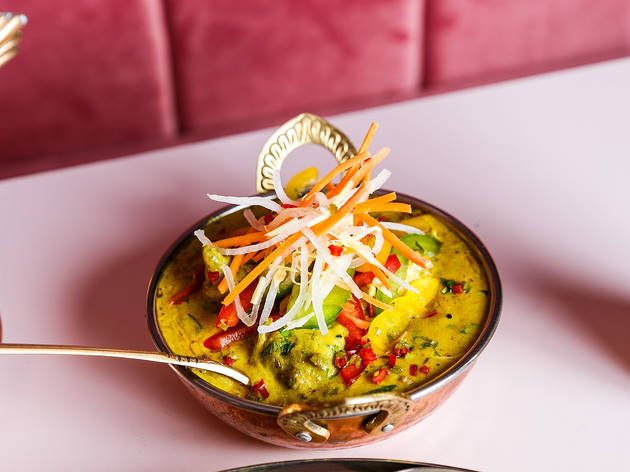 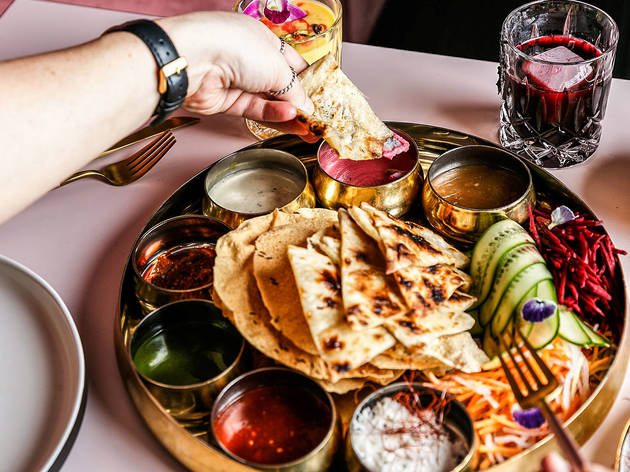 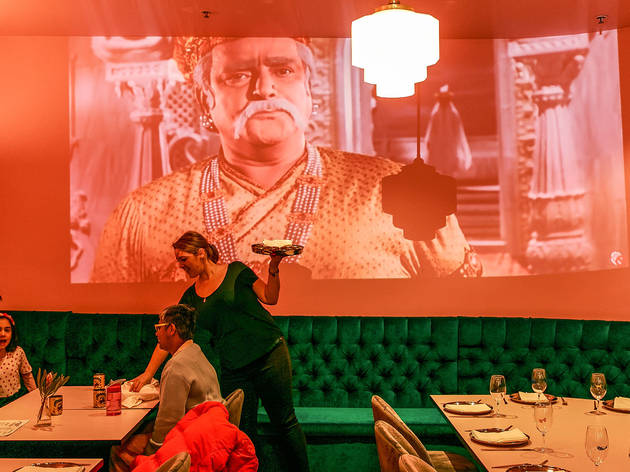 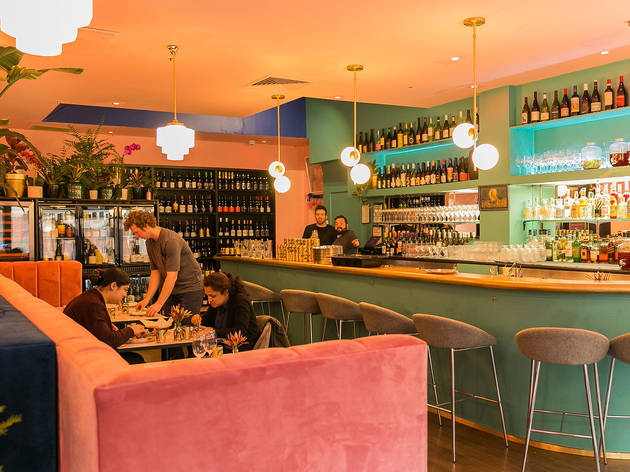 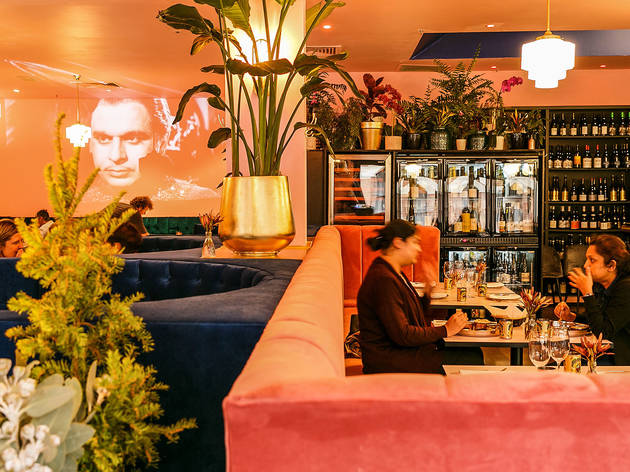 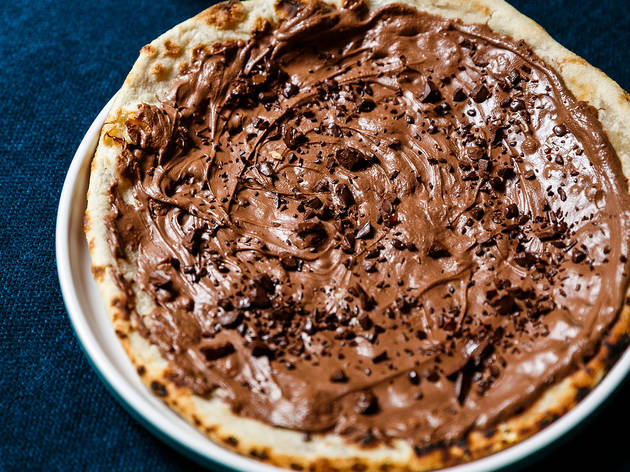 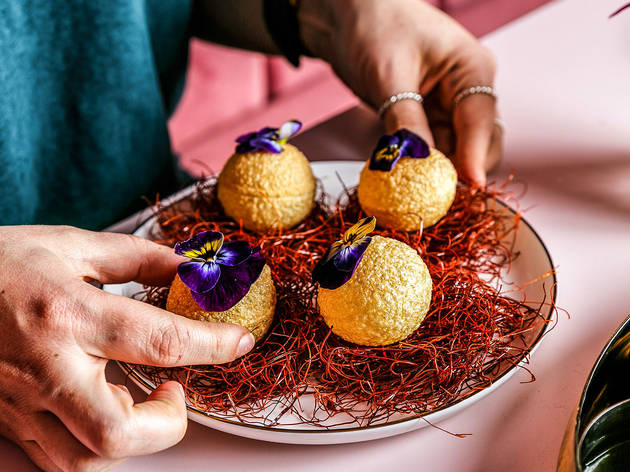 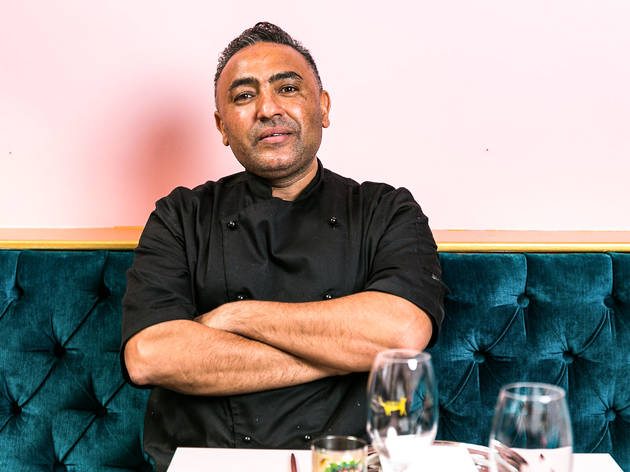 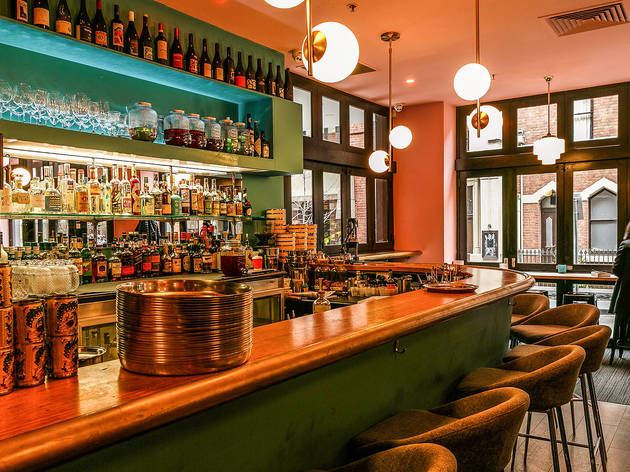 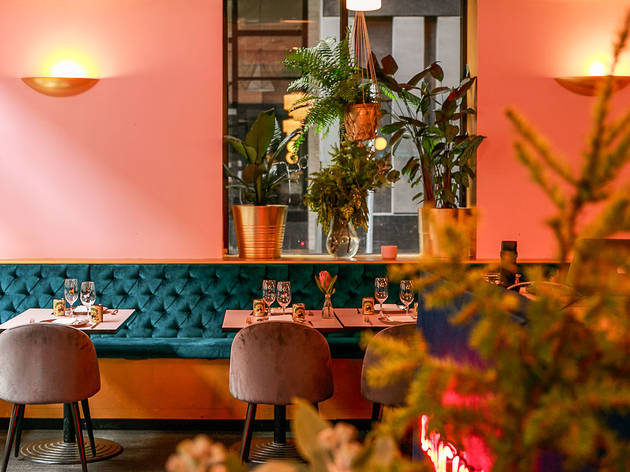 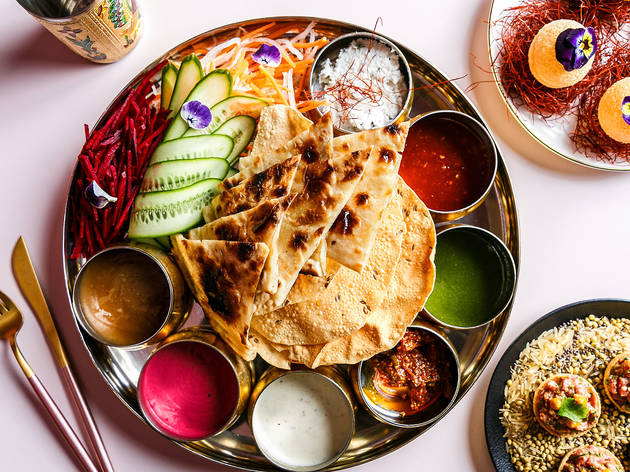 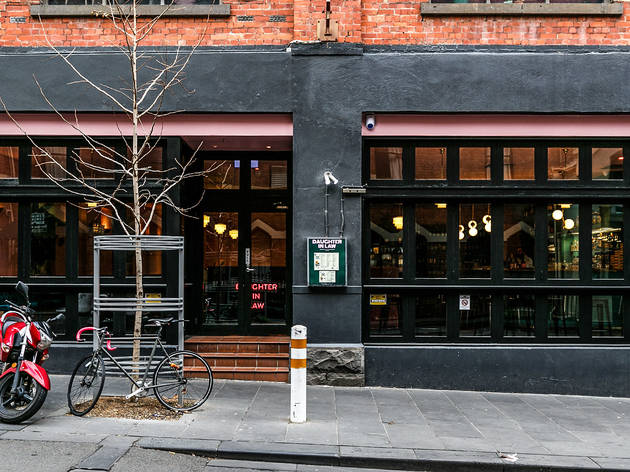 You’d think that when the electricity is cut in the middle of Friday night service, the guests, staff, bartenders, chefs and owners would freak out. Not at Daughter In Law. Owner and chef Jessi Singh says with frustration, “Of course,” and lets out a sigh of relief because he knows that the worst thing that could happen has just happened. He starts lighting candles and placing them in front of guests. Singh and his veteran right-handers, Sacha Imrie and Shane Barrett, are on the case of reconnecting the high-energy Bollywood soundtrack, making sure people can see what they’re eating while sitting in total darkness, and have the lights, fridges and the projection of the 1960s Bollywood epic Mughal-E-Azam back up and running within minutes. Not a single guest has moved from their seat, complained or attempted to run away from their dinner bill – they’re all having too much fun.

Daughter In Law is the latest restaurant by Jessi Singh after setting up the Babu Ji empire in Australia, selling them off, opening to critical acclaim in New York and California, and returning, but not before opening Don’t Tell Aunty in Sydney. The only difference between this and his previous restaurants is that Daughter In Law is not steeped in any sense of authenticity; this restaurant is meant to break the rules, dabble in fusion, and much like the women of arranged marriages after whom this restaurant is named, carve out its own identity in a world of rules and structure. Reinvention and fusion can be dirty words, especially if the person reinventing and fusing has no foundations in the cuisine they’re playing with. But luckily, Singh was born in Punjab, raised in Australia and lived in America, and influences from his entire life can be seen in the food at Daughter in Law.

The first thing you’ll notice when looking at the menu is that you’re going to want to eat everything. There are snacks from the street including a thali plate with charred, pliable naan and various chutneys sitting on every table, ‘pots’ of curries including a butterless butter chicken, a range of curious naan pizzas, and proteins from the tandoor like a 350g O’Connor rib eye with curry chips and sides. There are obvious snacks that are designed for drinking, like the naan plate and the house-made papadum basket and the radioactive-looking, sticky-sweet-glazed, fried Colonel Tso’s cauliflower, which is an obvious nod to Singh’s time in America, but we would recommend starting on the ‘Balls of Happiness’. These are gol gappa or pani puri – hollow, brittle balls filled with a spiced yogurt and mint and coriander chutney that you must eat in one bite unless you want the contents to end up all over you. The gol gappa are deliberately designed to be just too big, so you and your dining companions are sharing a mutual awkwardness in cramming the cool, crunchy, sweet and liquid snacks into your mouths – you can’t help but make panicked eye contact and laugh. Balls of happiness, indeed.

Beef tartare receives an Indian makeover by being stuffed into bite-sized papadum cups with a sweet coriander chutney and brightened with green mango powder and crushed pomegranate. The batata vada takes the place of any bar snack croquette: balls of fried mashed potato with mustard seeds, dried chilli, curry leaves and lentils dressed in a tart, pineapple chutney. Every bite so far has achieved a balance between rich and sharp, sweet and sour, salt and bitter that has tricked our brains into thinking each dish is refreshing rather than heavy, while turning the volume up to 11. Impressive.

The cocktails using carrot juice, tamarind chutneys, curry leaves or chaat masala spices are inspired rather than tokenistic, like the Carrot Chat: an Indian take on the Margarita, with sweetness, acid and heat coming from less obvious sources than sugar and lime but managing to mimic the flavour profiles of the original. The wine list is an interesting and eclectic mix of small producers, with a heavy emphasis on Australian wines by the glass, and more interesting skin-contact international producers by the bottle, cleverly chosen to stand up against the complex and punchy food offerings.

There are ten curries on the list, with an even split between meat and vegetarian. We opt for the Punjabi kadhi, a soured yogurt and turmeric curry with lightly battered kale and onion fritters, draped in refreshing batons of young ginger, raw capsicum and coriander that doesn’t make you miss meat at all. Order it. From the tandoor, a whole King George whiting is boned out and stuffed with diced capsicum fried in spices and curry leaves, served with a side of pineapple butter and a wedge of lime coated in black lava salt. It’s a clever and delicious use of the tandoor that we haven’t seen in Melbourne before, delivering the Aussie influence on the menu, but it is the curry chips that really shine. If you’re expecting chips doused in a curry sauce, you will be mistaken but not disappointed. Instead, commercial fries (there is nothing wrong with that) are generously dusted in a house-made curry seasoning of green mango powder, crushed pomegranate seeds, pink salt, black lava salt and ground caraway that is pure genius. It’s a good thing this is available as a side order, too.

Naan pizzas sound like a fun idea, but we are advised to come back another night after we’ve been drinking because it is the perfect foil for a boozy night out. Don’t worry if you don’t get to eat everything you want in one sitting; it is just a good excuse to come back as soon as you can. Instead, we are directed towards a Nutella-topped, chocolate-studded naan served with a cardamom cream that cuts through the weight of the double-choc dessert.

Daughter In Law is loud (literally), fun and in every way, a rule-breaker with its millennial pink and baby blue velvet upholstery, square tables jammed into the round booths, succulents mingling with orchids and natives, music played in a language that most patrons don’t understand but will still dance in their seats to, Sicilian low-intervention wines served with Punjab curries, but like all things Singh does, we would say in a very big way that he is a trendsetter. Watch this space; we anticipate inevitable knock-offs.

Near Daughter In Law