Restaurants Southbank
5 out of 5 stars 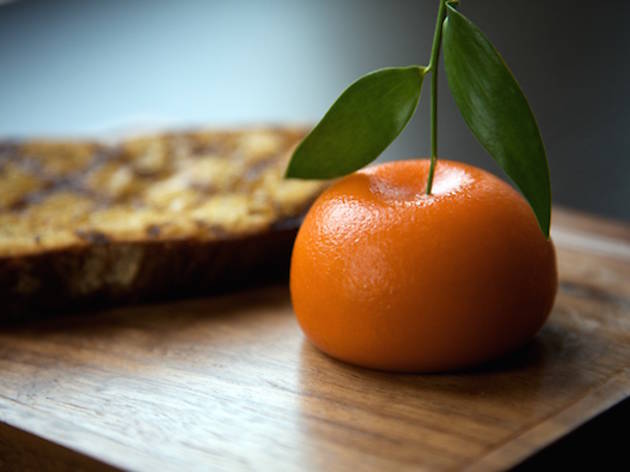 Salamagundy, frumenty and meat fruit: Mr Blumenthal's eccentric creations are here to stay at the near-perfect iteration of his celebrated London restaurant

Here is a hint for those anxious to eat at Dinner by Heston. More people want to eat dinner at Dinner than lunch, apparently. It’s worth trying to call just before service to see if anyone has cancelled: apparently some people dare stand up the Sultan of Snail (porridge, that is) and you might capitalise on their loss.

Move briskly along through the entrance tunnel with the bespoke scent of leather, damp moss and wood towards the smart, plush, hushed, Bates Smart-designed dining room, all autumnal colours and luxurious textures. They’ll ask if you want a drink at the bar, where 'historical' cocktails are the order of the day (the verdict on the gin and verjuice Mint Rickey, circa 1880: as refreshing as a cool breeze on a summer’s day). History is the hook here, although it’s easy to ignore it. Dishes are gleaned from as far back as 1300, churned through Blumenthal’s modern chef brain. You could think of it as gastronomic past meeting gastronomic futurism. Or simply as an upscale bistro with a cool backstory.

The London version of Dinner (vital statistics: opened in 2011, currently number seven on the World’s Best Restaurant hip-list) is dripping in accolades, and from Time Out’s experience, the Melbourne iteration should be no different. You probably won’t see the man himself, but chief Blumenthal lieutenant Ashley Palmer-Watts is in the house, and many of the dishes have been transplanted more or less intact. There’s the now-iconic meat fruit – a rather perfect chicken liver parfait, as rich and airy-light as a socialite, dolled up in a shell of mandarin jelly to resemble nothing so much as a – yes – mandarin.

Salamagundy (fun fact: originally a throw-everything-together salad, or a 17th-century solution for leftovers) is perfect pinkish chicken oysters and wickedly caramelised skin, horseradish cream and braised artichoke stem with pickled walnuts lending a pleasingly astringent kick. Frumenty is another dish from way back when (1390, to be exact) that looks very now: a Jules Verne under-sea vision of grilled octopus and crisp sea succulents swimming in a smoky sea broth with dabs of lovage emulsion and a base of spelt for earthy chew.

The open kitchen with its gazillion dollars worth of high-tech cooking equipment also features a spit roast pulley system modeled on the one in Henry VIII’s royal court. It seems an awful lot of effort to caramelise pineapple, but practicality has never really been Blumenthal’s concern; and the tipsy cake the pineapple serves is a lovely thing, the love child of pudding and scone with a brandy-driven basting sauce. Add it to the lengthy list of Dinner must-haves; a list so long that one visit probably will not suffice. Its Fat Duck precursor was a once-in-a-blue moon kind of place, with its surfeit of food and ideas. Dinner is the easy-going younger sibling, the kind of place you could head back to again and again, price and bookings permitting.

*Time Out were provided with a complimentary booking for this review.

Near Dinner by Heston